For years during the first decade of this century my go-to ruleset for wargaming was Warhammer Ancient Battles, basically Warhammer Fantasy Battles without the Fantasy. It was the best ruleset around in my not-at-all humble opinion in the sense that it was the best playable ruleset that I could find after reconnoitering horrors like DBM. It was however a clunky, typically 1990ies ruleset with lots of tinkered bits screwed on and a lot of frustrating stuff. I eyed the fantasy version of WAB but that already seemed terminally broken and cheesy.

When WAB went, I looked around for replacement. War & Conquest was promising and better, but still retained some of the frustrations and failed to attract opponents. Hail Caesar showed me that the Black Powder engine was fit more a lot of things, but not pre-firearms wargaming. It was bland and tasteless. Kings of War had nothing that intrigued me. So little showed up and over the years I sold most of my armies. 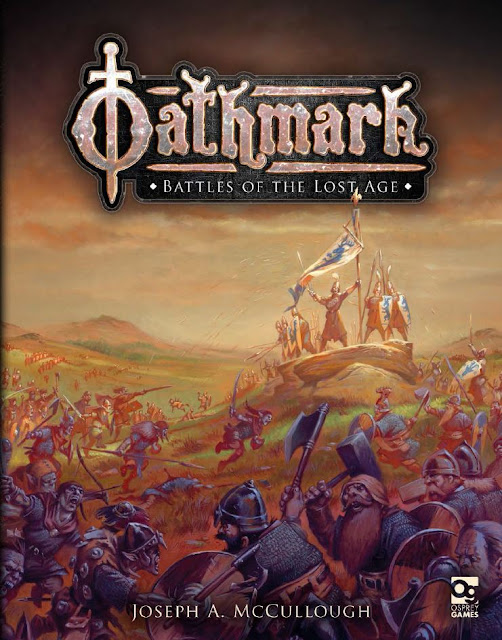 And then Oathmark was published. I succumbed to the hype, bought the rules, painted an army of dwarves that had been gathering dust for years, dug out some more fantasy stuff I had laying around and played some games. And was hooked. Why? Well, to be perfectly honest because it plays like Warhammer with the same joy and without the frustration. 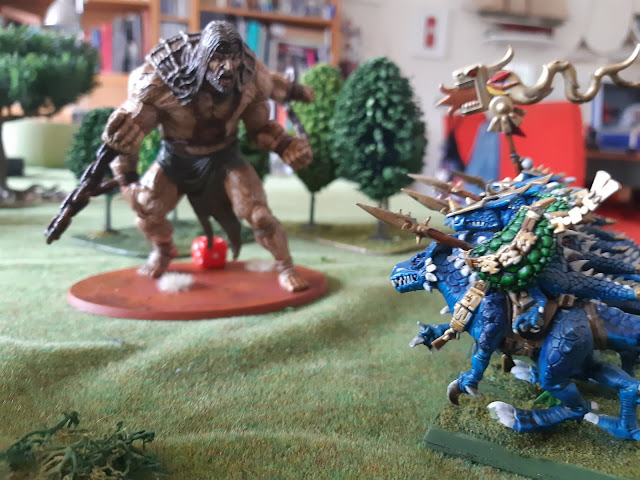 First, this is not an IGO-UGO system but has alternate activation. Players alternately activate units. So it doesn't have turn phases either. An activated unit has two actions and may move, move a lot, shoot or charge into contact and if it does so a bilateral combat occurs immediately. Activation rolls are no do-or-don't affairs. A failed Activation roll limits your actions, but still enables you to do things with that unit. These two things make it a dynamic game that constantly engages all players.

Second, Oathmark ditches Priestley's Law (Only D6 Games Will Sell) and uses D10s. Predictably this will give more gradual and less predictable results.

The rest of the mechanic seems relatively conventional. Units have stats like Move and Fight, need to roll a minimum value to succeed in things like Activation rolls and Hits and roll for Morale when taking casualties. There are the traditional races like Dwarves, Humans, Elves and Orcs and Goblins.

However, all rolls are achieved with a maximum of 5 dice, never more. Also, a Die roll always causes an immediate result. So no To Hit/To Wound/To Save sequences. Just a Defence minus Fight = Target Number roll and a success is a hit. No buckets of dice here. 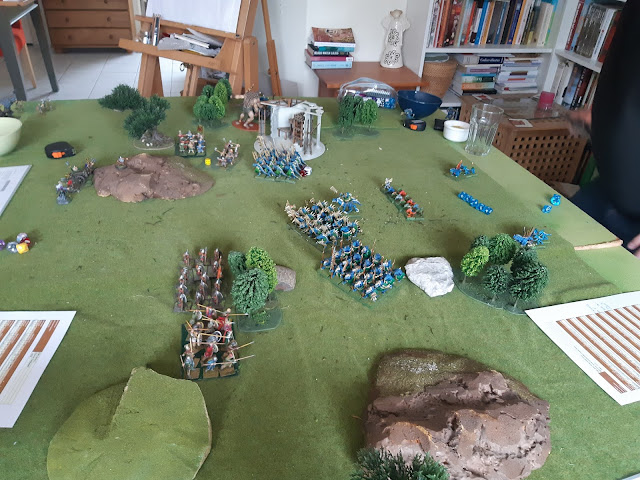 The Army building
Army building is done brilliantly. There are two ways. First you can traditionally choose a race and take units from the list of units of that race (and some unaligned ones). Units have a point value so you can tailor battles to a specific point value to balance things.

Alternatively, you can build a Kingdom with a capital of a specific race, but additional territories that enable you to field units from different races as well! While other races' territories are slightly more expensive to "buy" into your Kingdom, you can take any. But not all. You can only take 10 territories out of 44 as your starting Kingdom and each territory gives you specific units of a specific race. For example Plains give you Human cavalry. I created the Kingdom of Dale/Erebor from The Hobbit this way.

The differences in races are notable. Elves tend to be expensive and extremely disciplined elite specialists, are very hard to break, will almost always activate but are never numerous. On the other end of the spectrum there are the goblins, brittle, undisciplined and mediocre at best but cheap enough to field them in hordes.

This means  that in order to create an army that excels in everything, you need to enlist different races. For anyone that learned Fantasy in a GW store, this is heretical! But if you were raised with Tolkien, all this should come easy to you. 😁

There are multiple troop types (although not all races have all troop types) like several infantry types (spearmen, linebreakers, militia etc), cavalry (heavy and light, horse and wolf) artillery and a list of aligned and unaligned monsters and creatures that either fight in small units or alone.

A unit is kind of standardized. Man-sized figures are deployed 5 rows wide and 1 to 4 ranks deep. A unit is never bigger than 20 figures. Bigger figures like trolls deploy in one rank of 3 or even alone, like Dragons. Ranks give you bonuses in To Hit roll, Morale checks and Shoot rolls, but make you more vulnerable for artillery. A good dilemma improves a game, I always say!

There are Characters, but they are not the one-man juggernauts from Warhammer. Instead, a General actually Commands units (he can activate more than just his own unit and boost Morale Checks) and Champions might at most give an extra Kill in combat or may challenge enemy officers or Champions. They actually feel and play like the troop type they are supposed to represent. 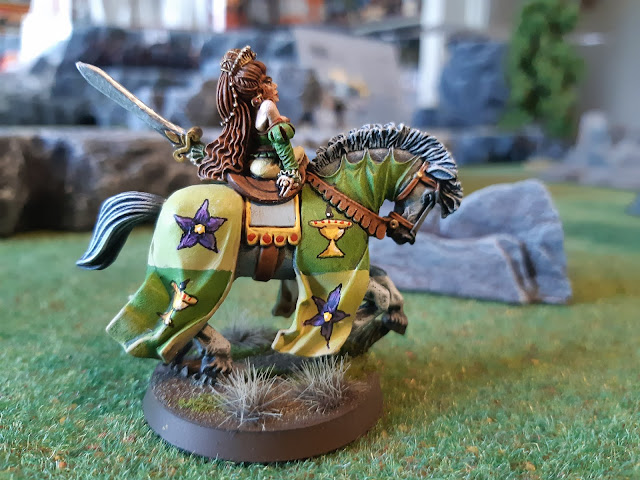 Spellcasters are powerful, but expensive characters. You can buy them in levels and the higher the level, the more spells and the more dice you may roll to cast them. But also much more expensive. Spells can only be cast once per Activation per Spellcaster, can make a powerful impression but so far have not been gamechangers.

Monsters can be very impressive, like the 800 point Winged Dragon which is practically a small army in itself. However, in a 3000 point average game it will eat up over a quarter of your points, so it better be a gamechanger. That amount of points will buy four (4!) full units of Goblin soldiers!

So how does it play?
It plays fast. Units are not particularly fast, but they are maneuverable. This is because units may move or maneuver through obstacles as long as they can end their movement in formation and outside the obstacle. So you are spared the horrors of "clipping" and being unable to move because your unit was 2mm too wide. Besides, even failed Activation rolls enable one Move action. So there is always something happening. The game never drags. You never have to wait for something.

Combats are fast because both combatants roll simultaneously for their own Target Number and remove casualties and then one or both units move away from each other. Combat can be very bloody between unequal opponents and units with large losses will have trouble to make their Morale check. And when already Disordered (after one failure) a failed Morale check will send a unit packing. 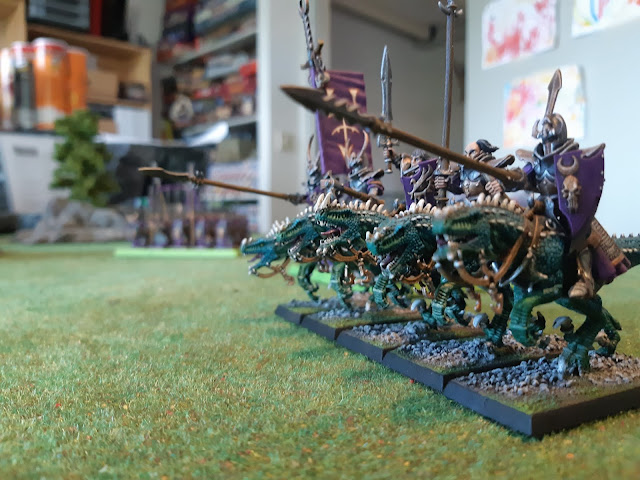 As a player you are always engaged, since combat follows contact immediately, both players need to roll and after your opponents activates a unit you immediately are next. The game continues to flow until one of the armies breaks or retreats.

The rulebook
The rulebook is extremely well laid out. It is teeming with clarifying diagrams and subjects are usually explained in one or two page spreads (with accompanying tables) so you almost always find what you are looking for on one page spread. There are the main rules, advanced rules, scenarios and Kingdom and Army building chapters. There is a Campaign chapter that explains how your Kingdom may expand (or shrink!) during a campaign, which might give you access to new troop types. There are army lists for Dwarves, Humans, Elves, Goblins and Orcs as well as aligned and unaligned Monsters and other creatures.

It is a visually pleasing book too. 192 full colour pages with lots of pictures, paintings and drawings bound in hard cover. 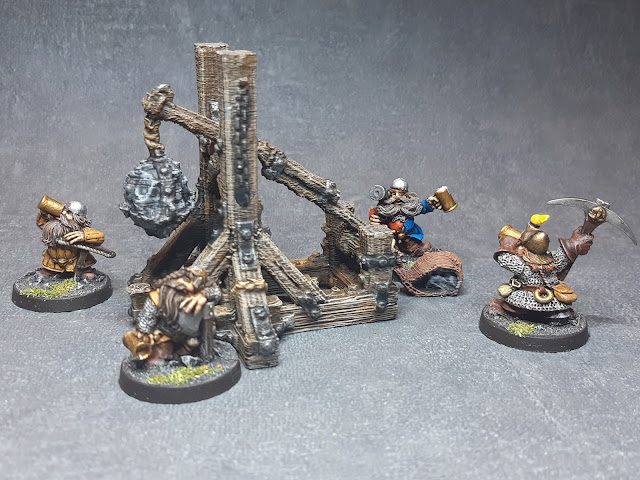 The miniatures?
While there is a line of Oathmark miniatures from North Star anythings goes really.

This might however be the place to say something about basing. Oathmark bases human-sized figures on 25x25mm and bigger figures on 25x50, 50x50 or 50x100. So a unit front is either 50, 125 or 150mm wide. This already tells you that front width is not extremely important, just handy.

Don't rebase your 20x20 or 25/round stuff. The important thing is to remember that a unit frontage is 5, 3 or 1 figure wide (depending  on the size of the figure). In combat the attacking officer always lines up in the middle of the frontage he is attacking with his unit. Maneuvering units may move through obstacles as long as they don't end on top of them. So the exact width of a unit is not very important. At most, a unit of 5 20mm bases wide can deploy in a 100mm corridor instead of a 125mm one. I have yet to see that happen.

So don't rebase or get hung up on base sizes. No need. 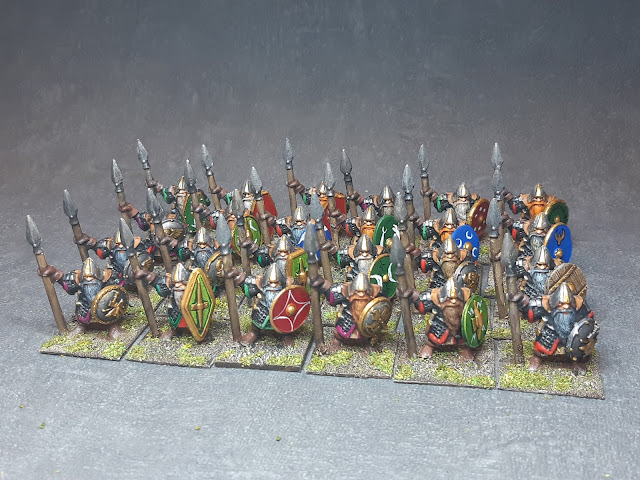 What could be better?
The book made it out of the printing process with some printing mistakes. The Oathmark players' Facebook page has an errata list. An official one is in the works. Nothing to get upset about.

Overall Oathmark seems to have been very well tested. So far players have only found one Spell that seems to invite abuse (Smoke). The rest of the game seems to work very well and as intended Although those intentions are not always to anyone's taste, but well, wargamers will be wargamers.

The Conclusion
An extremely enjoyable mass fantasy wargame. It will capture my attention for quite a while to come. Extremely recommended!!!

The Sequel?
Additional books are announced (in publication sequence as known at this time): Battlesworn (elite troops), Oathbreakers (Undead) and (if Amazon is to be believed) Bane of Kings (as yet unknown but I am holding out for demons and such).