The Sword And The Flame 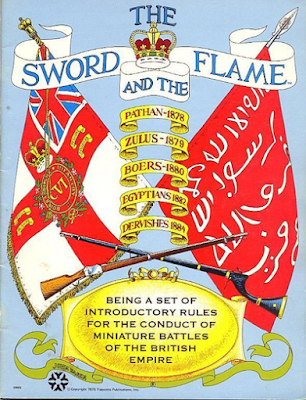 A friend making an inquiry prompted me to write e review about this lovely and venerable ruleset. Written by Larry Brom and first published in 1979 The Sword And The Flame has been played by thousands of people for 36 years now. It's about time I wrote a review! After all, it is this set that heralded my return to wargaming some 15 years ago after getting bitten by the bug by the great, late (because the site has been down for years now) Major-General Tremorden Rederring, an alias of American gamer David Helber.

The ruleset derives its name from the lines of the Kipling poem cited above and not surprisingly is placed firmly in the Golden Age of the , starting around 1830 and ending with the First World War. Players assume the roles of British or other European colonial forces, their native auxiliaries and of course their native opponents: Zulus, Dervishes, Pathans but also quite sophisticated enemies like the Boers or the Egyptian army of 1882. Given the period this set might (and almost certainly will) offend those of political sensibility. After all, the colonial era undeniably has a lot going against it. While realizing this, I will not go into it. I will confine myself to its colorful backgrounds and interesting asymmetrical gameplay, which were the reasons I was so charmed by the game. 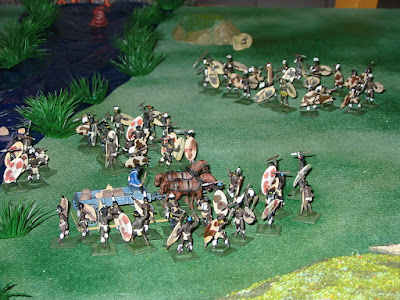 TSATF has been released in a number of editions over the years. This review will address the last one; the 20th anniversary edition from 1999. TSATF is sort of a skirmish set in that figures have individual statistics  and are removed (or laid down) as casualties individually. So it is either single basing (and movement trays) or counters to indicate casualties. Nevertheless the smallest organizational unit of TSATF is the unit: 20 infantry figures (or 12 cavalry) with at least one leader (and an NCO in case of Europeans). There is a marked difference in play between Europeans and Natives. Europeans or European trained troops may fight in several formations: column, line, open or closed formations and squares. Formation effects are enhanced or reduced vulnerability to enemy fire, close combat ability and speed. The game is designed around 25mm scale (this alone shows its age J ) but I played it in 20mm scale without any modification. Surely 15mm would work equally well and below that single based figures seem too fiddly to be pleasant. 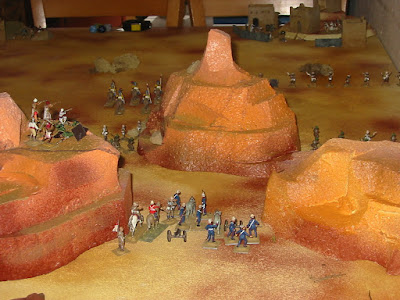 Turn sequence was innovative for the time and indeed is still some cause for controversy. Normal playing cards are used for initiative sequence as well as fire effects. The cards colors indicate that either a European (red) or Native (black) unit may move. Movement is (not to everyone’s taste but deliciously fickle) by rolling D6s and moving the number of inches rolled, emulating those excruciating moments that Sergeant O’Malley swallows a fly and catches a cough while bellowing an order or something. Faster troops roll more dice.

When determining hit effects more cards are drawn where numbered cards indicate a random hit, pictures indicate a key figure like a gunner, ensign or machine gunner and Aces indicate a leader hit. Hearts kill and other colours wound. Shooting is done simply by rolling a D20 for every figure firing, consulting the Fire Table for the required score for range, cover and target formation and reaching the desired number. Hit results can be a wound or a kill in case of Europeans or a kill for natives (who are not supposed to pay any special attention to their wounded; one of those points of sensitivity I was talking about). European troops will care for their wounded or suffer consequences on their Morale rolls. So you either Leave No Man Behind (but be slower) or be more vulnerable to The Shakes….

Morale is another 2D6 roll on the Morale Table. Calamities like a killed leader and abandoned wounded will make the Morale test harder to make. Morale rolls are required for a number of events besides reacting to casualties. Things like charging or receiving a charge require another, Morale/like roll on another table. Here too the differences between the armies are present, just as in the scores and modifiers used in Close Combat. As you will notice TSATF alternately uses D6s and D20s, a specific quirk of the game, as well as a number of tables (printed on a QRS) to be consulted when Moving, Shooting, Rallying, making Morale Rolls or engaging in Close Combat. While this sounds a bit clunky, my experience is that you memorize most scores quickly enough and after all, they all fit in two sides of an A4 QRS: a feat not equaled by a lot of modern games! 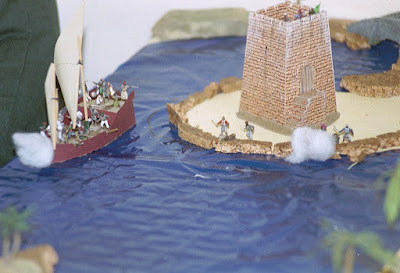 The rules manage the usual weaponry available to European and native troops of the time. Breech-loading rifles, jezails (muzzle-loading muskets), cannon and primitive machine guns like the Gardner and the Gatling are featured, as are the traditional native weapons like spears, swords and clubs. Where the natives will often find it tough going to weather the European fire power they should either employ terrain and ambush tactics wisely or bring a huge mass of warriors to the fray. As a matter of fact, the rules feature rather creative use of numbered rocks indicating possible sites for an ambush (neatly integrated into the terrain!) and encourage scenario play as opponents are usually mismatched as far as firepower is concerned. But make no mistake: masses of natives may still wittle down a European force with sporadic musket fire until a charge seems feasible. Time is usually not on the European’s side as they will need to force a victory or be outmaneuvered.

All the colorful troop types of the 19th century colonial world can be fielded, including cavalry armed with sword and lance and mounted on horse, camel or elephant. Some of the native opponents can be quite sophisticated opponents, like the Sikh Khalsa Army of the (trained and armed by Europeans) and of course the Boers with their (for the time) ultra-modern repeater rifles and artillery. Profiles are included for the standard British trooper (a rolemodel for all kinds of other European troops), native auxiliaries (usually Indian) and various native forces. It is not hard to see that these profiles will translate easily into other troop types as the British trooper becomes the template for Foreign Legionaires, German Schutztruppen or US Marines. 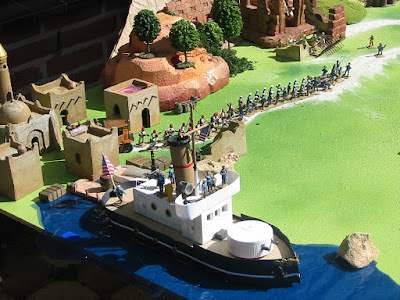 The rulebook includes a tutorial scenario of a hapless British unit getting ambushed by sneaky Pathans, a painting guide and some nifty tips for terrain building, like roads made from (unused) strewn kitty litter which I have employed on occasion. 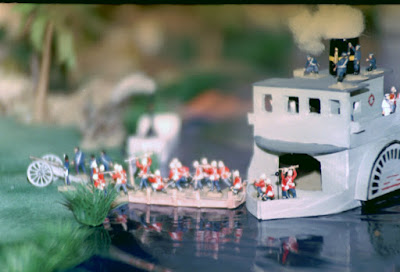 An almost mythical aspect of TSATF is its capacity to generate outright cinematographic outcomes. I cannot explain this, but have witnessed it on numerous occasions. A British colonel getting killed on the threshold of victory, panicking his troops into total defeat, a lone Pathan swordsman surviving every bullet and bayonet thrown or stabbed at him and decimating a British unit, a dastardly German Uhlan spearing a hapless archeologist and losing the game by exactly that amount of penalty points: I have witnessed them all. Gameplay is exiting and on occasion dramatic and movies may well be the inspiration for scenarios, as they have been for the rules themselves. 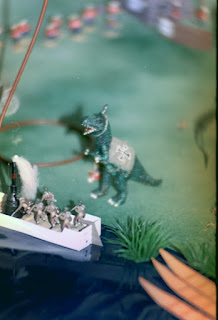 The rules are well suited to adapting for all kinds of pulpy stuff, like steam contraptions, primitive flying machines, trains and ships.  So if you miss those steam ornithopters and combat-trained Tyrannosaurs, it  is relatively easy to include them, although the rules do not “officially” include them. The mechanics are as simple as they are flexible so inventing rules for Pulp aspects is a breeze. 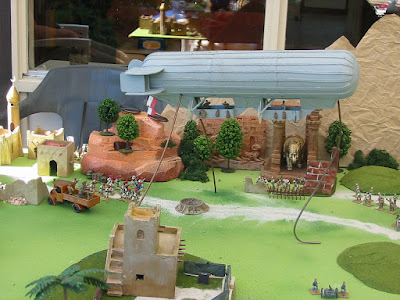 TSATF has spawned a number of expansions over the years, either commercially available of fan-based and published on various websites and blogs. These are usually limited to army lists dedicated to specific periods not included in the core book. The multinational troops during the Boxer Rebellion and the French foreign legion are among those, but also the white adventurers like James Brooke that conquered the region of Serawak. Not all expansions are colonial per se. Examples of exotic periods include a fantasy version, a classical version of the Roman conquest of Gaul and a Wild West version.

Over the decades that TSATF has been used it has also caused a multitude of house rules, far too many to mention here, to suit the tastes of its players. Two worth mentioning however are the foregoing of the rules for wounded (a wound is always lethal) as this speeds up play and the opportunity for European troops to split themselves up into smaller units led by either the CO or the NCO. This gives greater flexibility to the usually not very numerous British and other Europeans.

The TSATF core rules book is a black and white softcover A4 of 55 pages, illustrated with explanatory diagrams and the beautiful contemporary illustrations of Caton Woodville. It includes two hardcopy QRS and The Sword in Africa, an expansion for smaller units venturing into the heart of the . Besides the terrain building and painting tips mentioned above it contains brief info on the various troops and natives, short histories of the Egyptian, Sudan, Boer War and Zululand campaigns and an entire page of Bibliography. There is a lot to be read about the colonial period. Nowadays the book and its expansions can still be had at www.sergeants3.com for $33 for the corebook, This site also features errata and addenda.

Heartily recommended, as it will provide endless gaming fun as well as inspiration.

TSATF has its own Wiki, by the way. Cool, innit?
Geplaatst door Pijlie op 6:28 AM 5 comments: