The War Game by Charles Grant: A review

A while ago I received a venerable copy of “The War Game” by Charles S. Grant as a present. Mine was a good-looking hardback, still accompanied with its dust jacket and printed in 1971 (I was six years old at that time), which likely makes it a first edition. Always something to be enjoyed by us analog bibliophiles, although the magic of first editions will fade from our lives with the advent of the E-book, but that is another story. It also has one of those other fascinating elements of vintage books: a dedication. It was at one time given to “Robert, with love and best wishes from Mummy, Daddy and Sarah”. One wonders if Robert is still among us and whether he is still playing? We will probably never know. 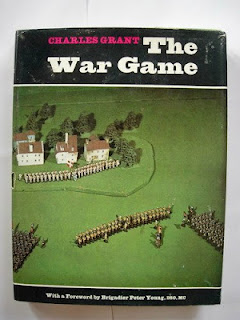 I started the book under a wrong impression, which was that The War Game was a book about wargaming (or war gaming as it was then and perhaps still is correctly spelled). While this is not entirely untrue, it is actually more of a ruleset than a compendium. It can however be read as such when you take mr Grant’s 18th century rules as a metaphor for war gaming in general and a pleasant read it is.

It is a well looking 190-page book with black and white illustrations, many of which feature the author’s prettily painted own 30mm plastic troops. He laments their disappearing from the market but does not disclose their manufacturer, but my best guess is they are Spencer Smith figures which fortunately are available again these days, cast in metal instead of plastic. The tabletop photos especially have a very Classic look about them and not just because they are in black-and-white. Stark wooden surfaces (presumably painted green) carry blocky Styrofoam hills, paper trees and scratch-built cardboard houses, all populated with huge 48-men units marching about. It’s Nostalgia with an Imperial “N”. 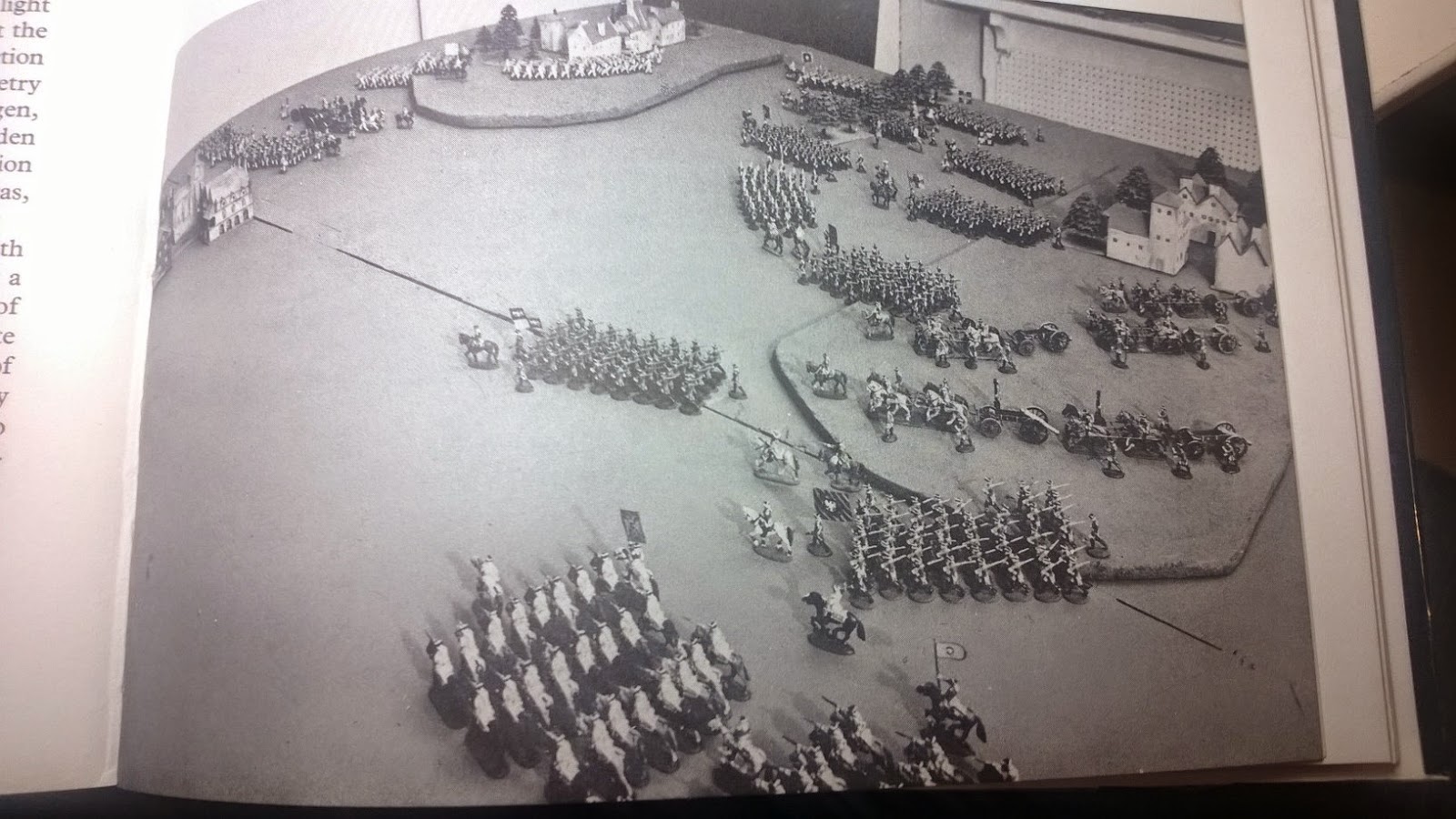 The book starts with a preface by Brigadier Peter Young, then a brief history of war gaming by the author himself. It quickly gets to the core of the matter and addresses the author’s rules for playing war games in the “Horse & Musket” period; the 18th up to the middle of the 19th century. All the different elements of the game are dealt with in a clear and systematic manner. Indeed, one might wish to see such accessibility in modern day rulesets! Infantry, cavalry, musketry, Melee and Artillery and its effects are dealt with. Morale is then addressed, as are terrain and buildings.

The rules are clearly from a time when hurry and stress had a lot less impact than nowadays. Players of the 60ies and 70ies took their time and who can blame them! Imagine playing with regiments consisting of 48, single-based, figures a piece! Moving the units around alone must have taken hours. The author also does not eschew little details, like the extra 1-and-a-half inch infantry move when in column! Musketry involves some serious number crunching: numbering your soldiers and your sub-units, counting number of firing sub units, rolling dice for hits, subtracting distance modifier, rolling for casualties, removing said casualties, all this with different modifiers for range, firing troop formation, target formation et cetera. The author then illustrates his rules with a battle, starting with the history, the translation to the tabletop and a narrative of how it played.

The book then gets to grips with the basics of terrain construction, its effects on the game, the use of maps in creating games and special rules like pioneers, river transports and campaigns. It ends with a final game scenario, Bunker Hill 1775, where all the elements from the book are brought together to create a fine battle scenario I really should play one day.

I encountered some surprisingly creative ideas in this ancient tome. Roundshot guns actually had a minimum range in reality (something I have never seen modelled in rule sets these days) as the cannonball was shot at an upward angle to land just in front of the target and then bounce horrendously through them. The author uses a measuring stick showing the parts where the ball is airborne and where it moves low enough above the ground to do damage. For canister he uses a metal-wire soldered Canister Cone, displaying the areas where canister had the most, less and least effect. Similar wire templates are used for grenade effects. 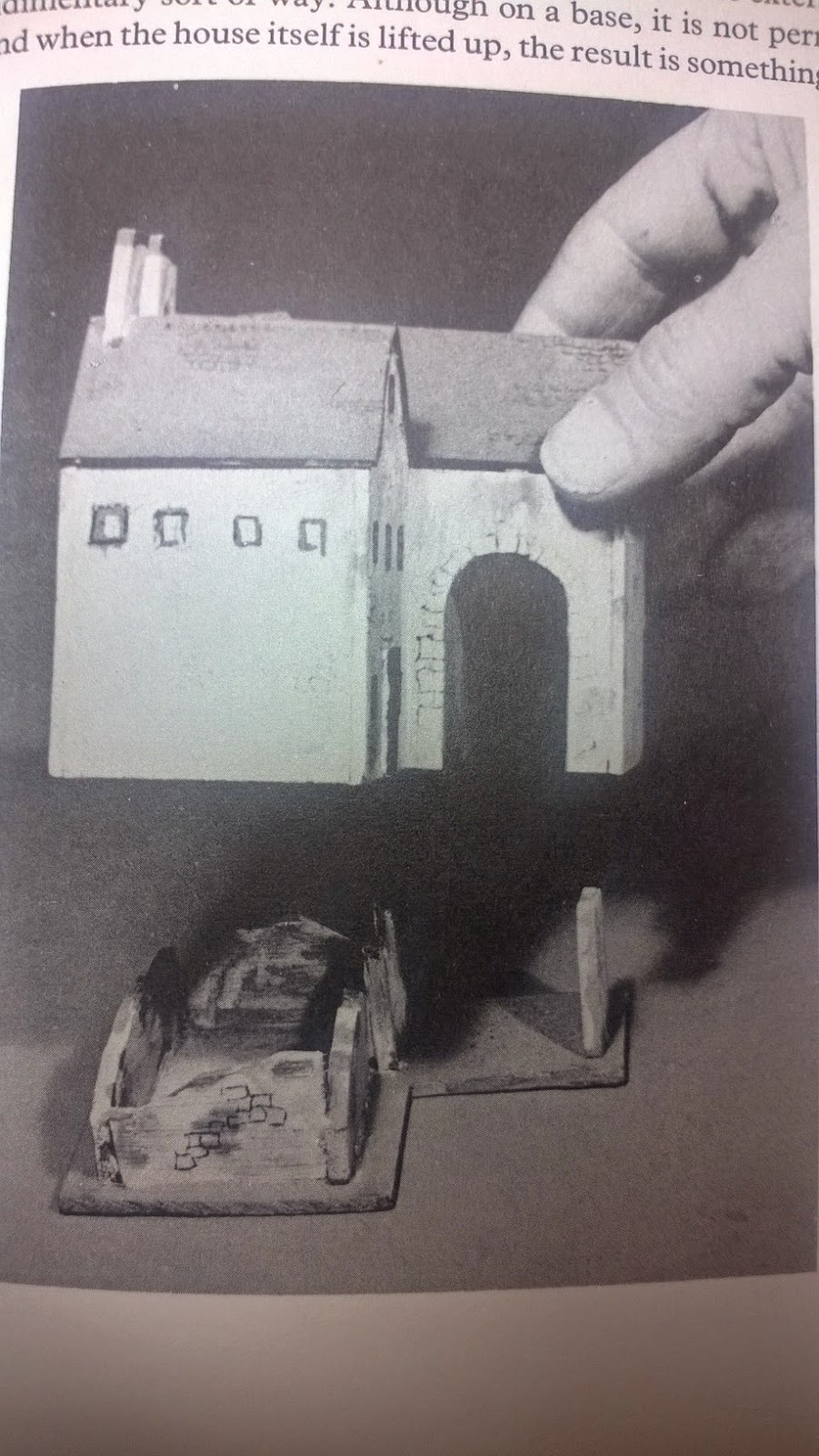 Houses were apparently built by him as a loose outer box, representing the intact building and placed over a slightly smaller ruined version of the same house. Just by lifting off the outer box, you created an instant ruin! Brilliant in its simplicity!

The book ends with the traditional index, but preceded by an endearing summary of manufacturers of figures and equipment of the late 1960ies.

Mythical names like Les Higgins Miniatures and Hinton Hunt Figures are given, complete with address.

Last but certainly not least a heart-warming mention is given to Airfix Ltd. (Haldane Place, Garratt Lane, London SW 18) “whose inexpensive plastic war game figures (20mm to 25mm – they do vary) have started the career of many a junior and not a few senior war gamers.”

Anyone knowing my preference for 20mm plastic figures will understand why THAT brought a smile to my face.

Even though it may not become your ruleset of choice for Horse & Musket, “The War Game” is an enjoyable and valuable addition to any war gamer’s library.
Geplaatst door Pijlie op 9:50 PM 7 comments:

Castlefest  is a annual festival combining music, fantasy, cosplay, LARP, games, pagan and Wiccan elements, good foods and drinks and general recreational activities all wrapped up in a big festival in the Keukenhof in Lisse. If you have ever heard of or seen the famous Dutch tulip fields: it’s at that place. The “Castle” part is played by the small castle situated at the center of the Keukenhof park.

At the invitation of my LFGS Subcultures  I attended Castlefest to host demo and participation games for two days. 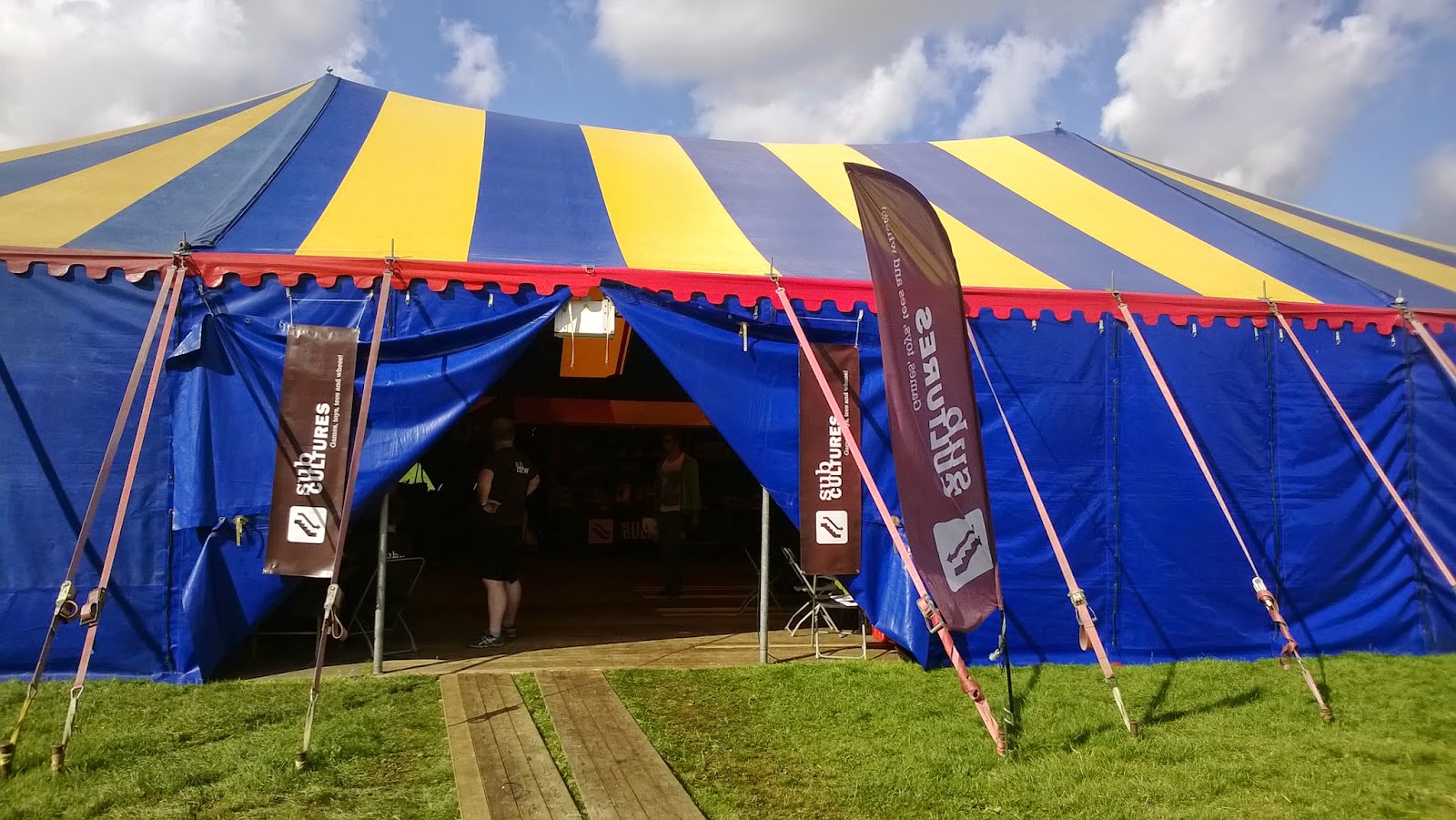 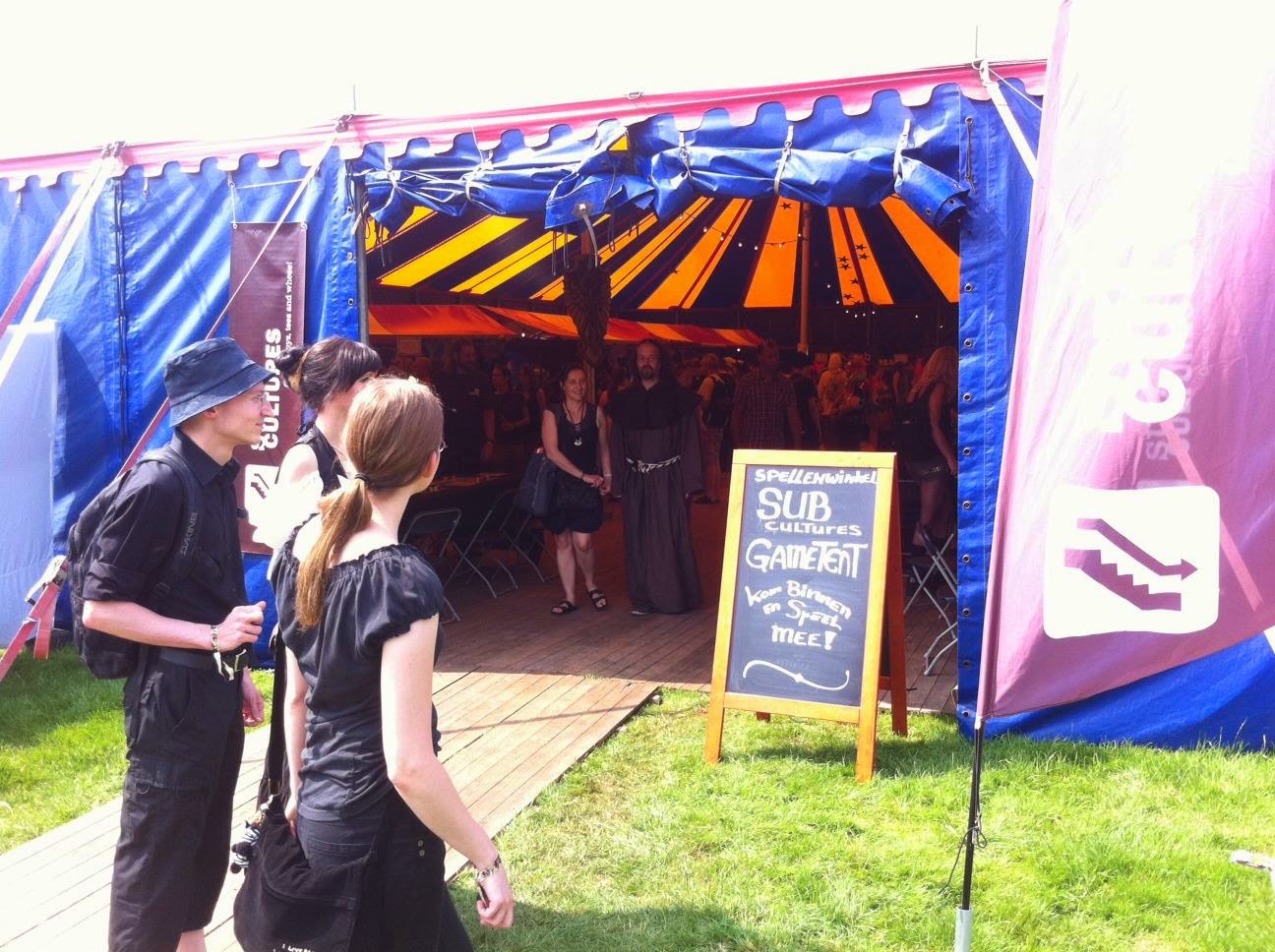 We were housed in a massive circus tent big enough to house the Subcultures store twice over. But since Tijn obviously lacked the means and/or the will to transfer his entire store there for the three days of the festival a large chunk of the tent was taken with the demo games, most of which were sold by the store. My games were the odd one out, as they were participation games not sold anywhere, since I largely made them myself. I must have heard the question “Where can I buy this? “ at least a dozen times… Some were disappointed by my answer, some were inspired and the latter category of people most made it worth my while! Quite a few people have visited my blog the last few days to seek more inspiration and ideas. 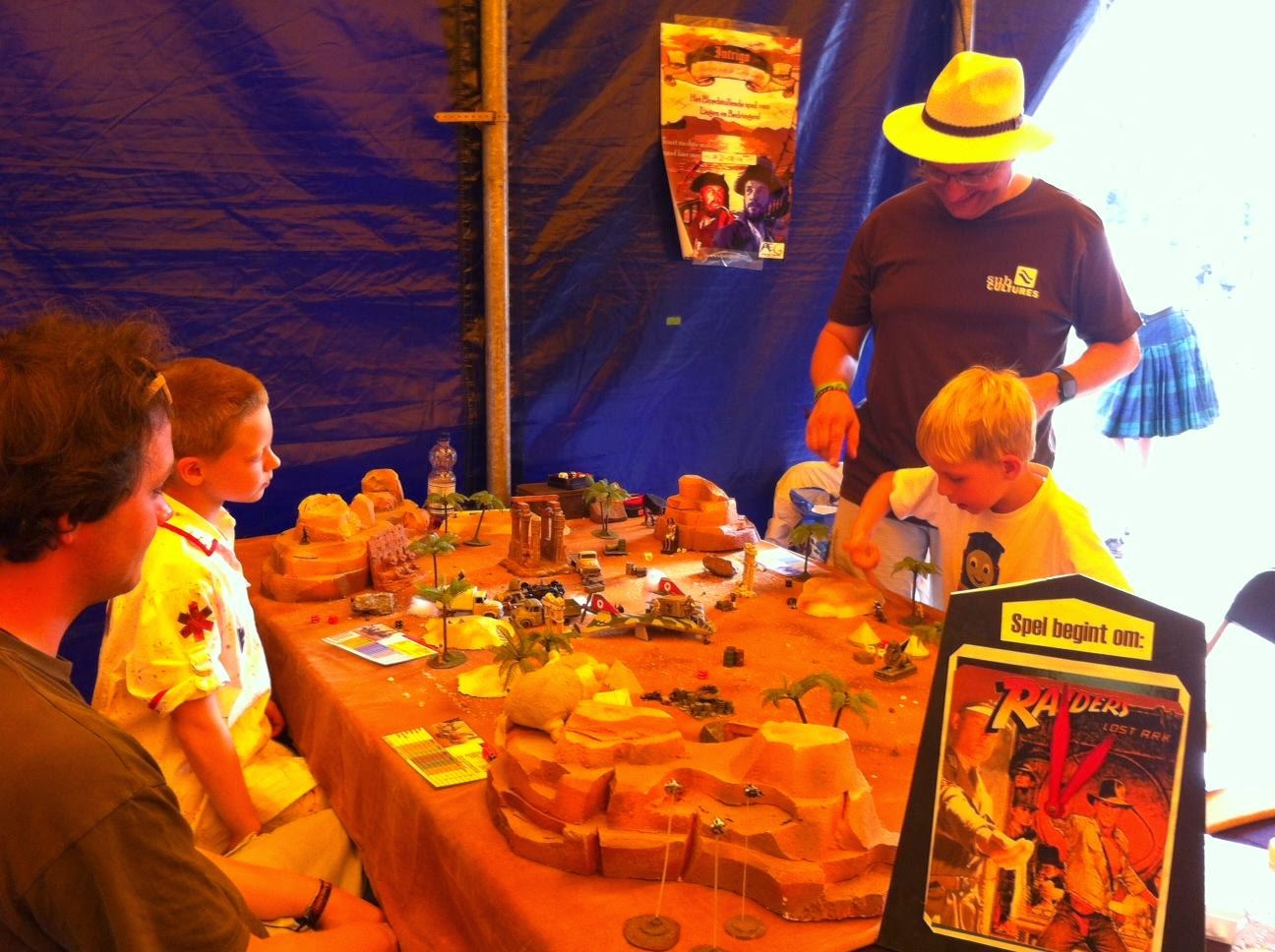 On Saturday I hosted the Indiana Jones demo, a large 6-player shoot-and-blow-them-up game based on the airplane scene from Raiders of the Lost Ark. For four games the very young and the somewhat older and all ages in between had a great, chaotic and violent time trying to make off with the Ark of the Covenant. In one game they battled each other so ferociously, that the game eventually came down to a last Battle To The Death between Dr Wu Manchu and Major Helga of the Thule Kommandos in which they slew each other, leaving no one standing to claim the Ark! 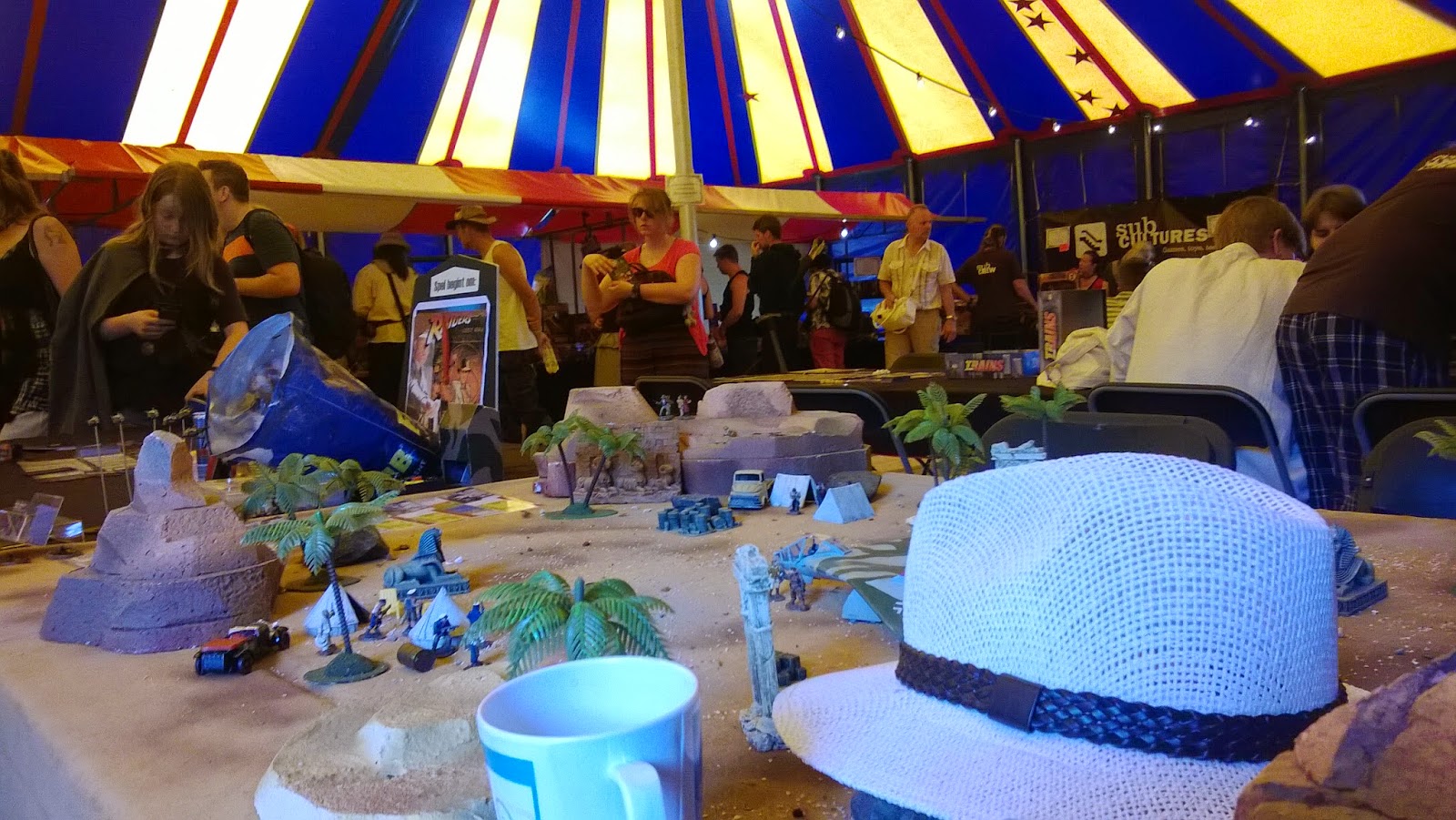 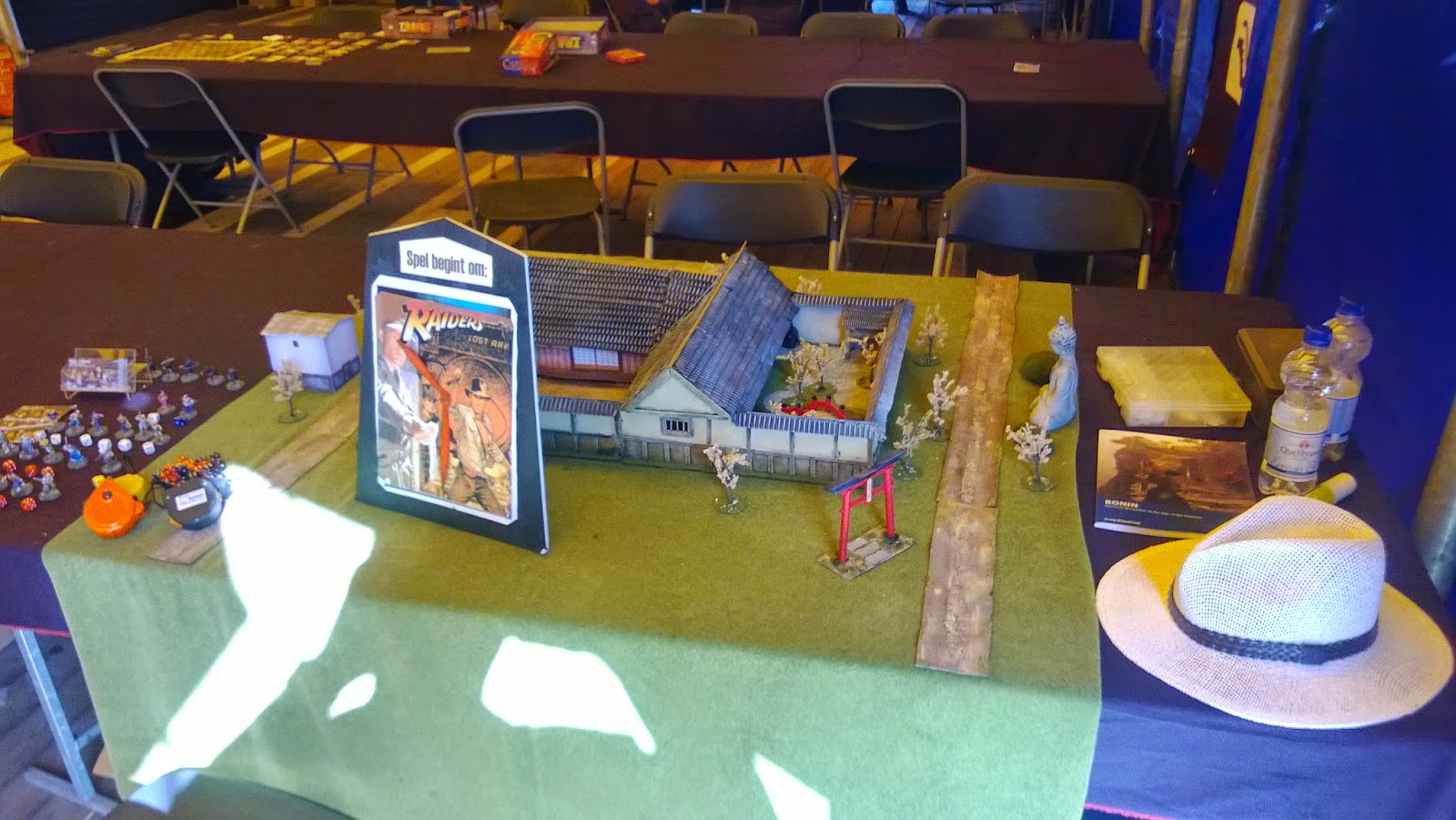 Sundays, which I expected to be a quieter day, I hosted the Ninja Raid game  which as essentially a 1-on-1 game I thought more suitable for the smaller audience. The game especially proved a hit with the local kids running around and one kid must have played it three times at least! I actually lost count of how many times we played, but it must have been at least seven games in which Ninja and samurai fanatically tried to slaughter each other in the attempt to either save or kill the Daimyo. 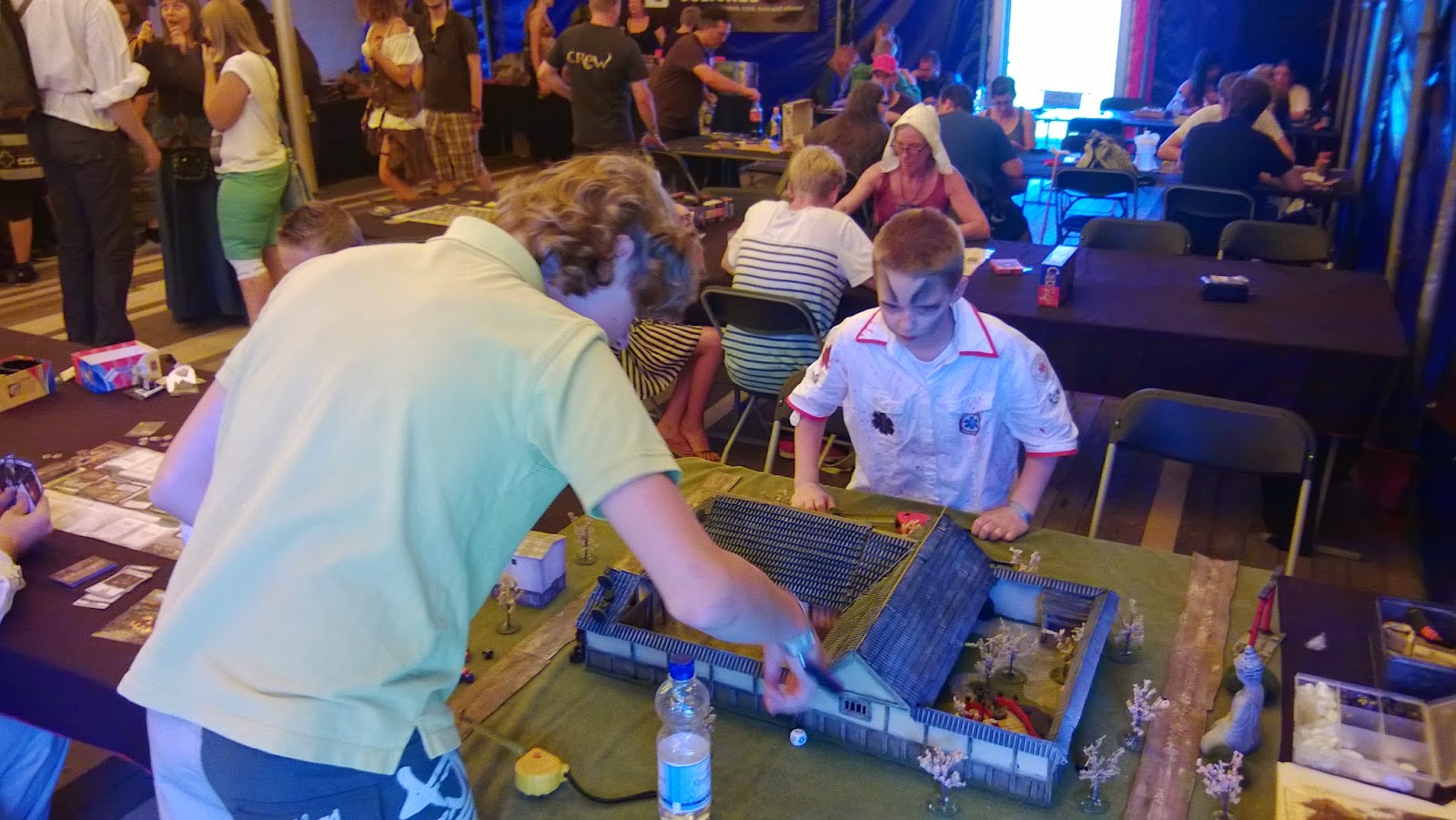 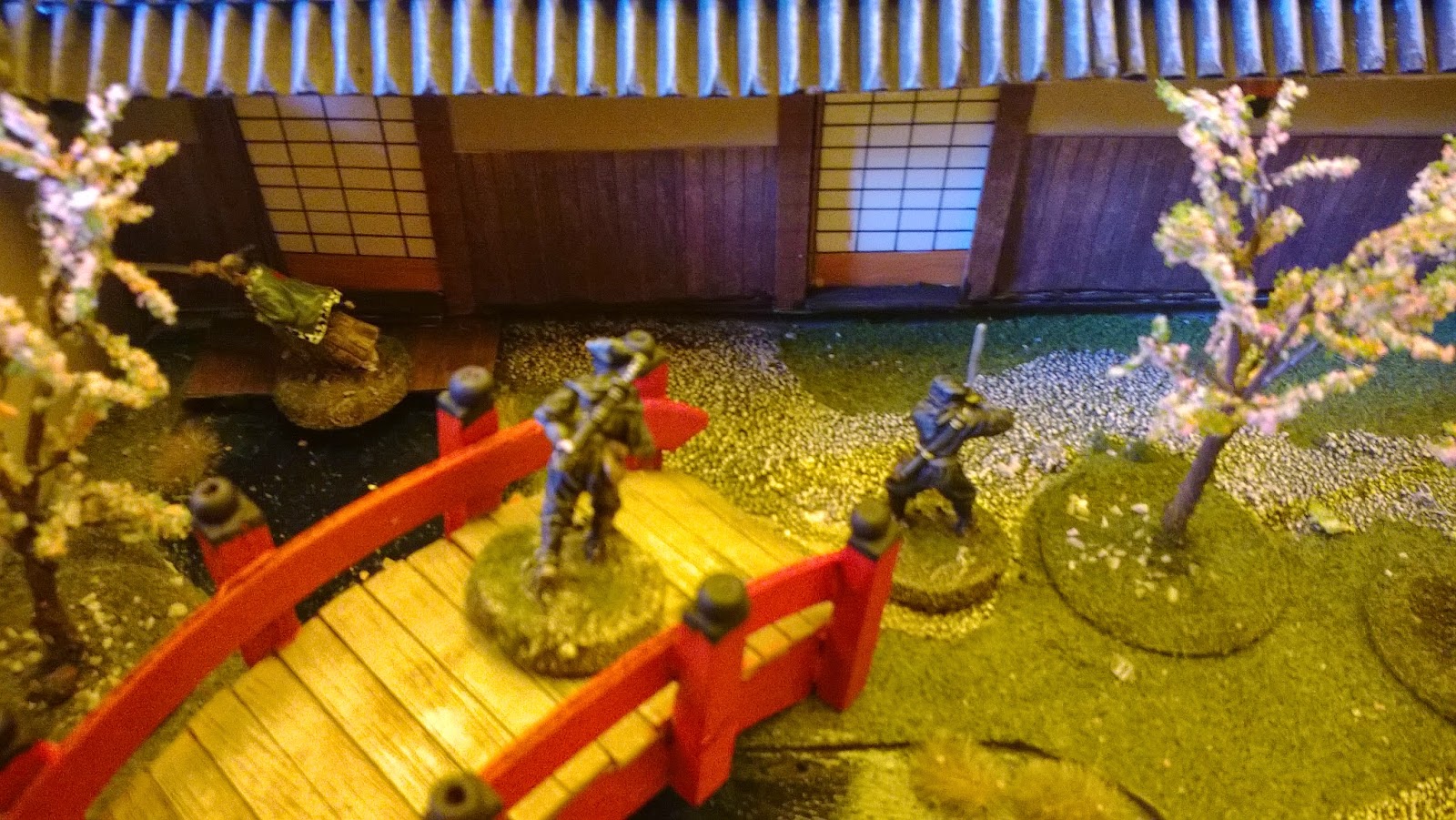 One of the more creative Ninja attempts was to simply knock on the garden door and ask for entrance. To my astonishment the samurai guard actually opened the door only to be attacked by two Ninja. While the samurai wasn’t the brightest bulb in the tree, he was a dead hand with a katana and managed to kill one Ninja and raise the alarm before getting himself killed. A bitter and bloody fight ensued in the garden where most Ninja eventually died without having a chance to kill the Daimyo! 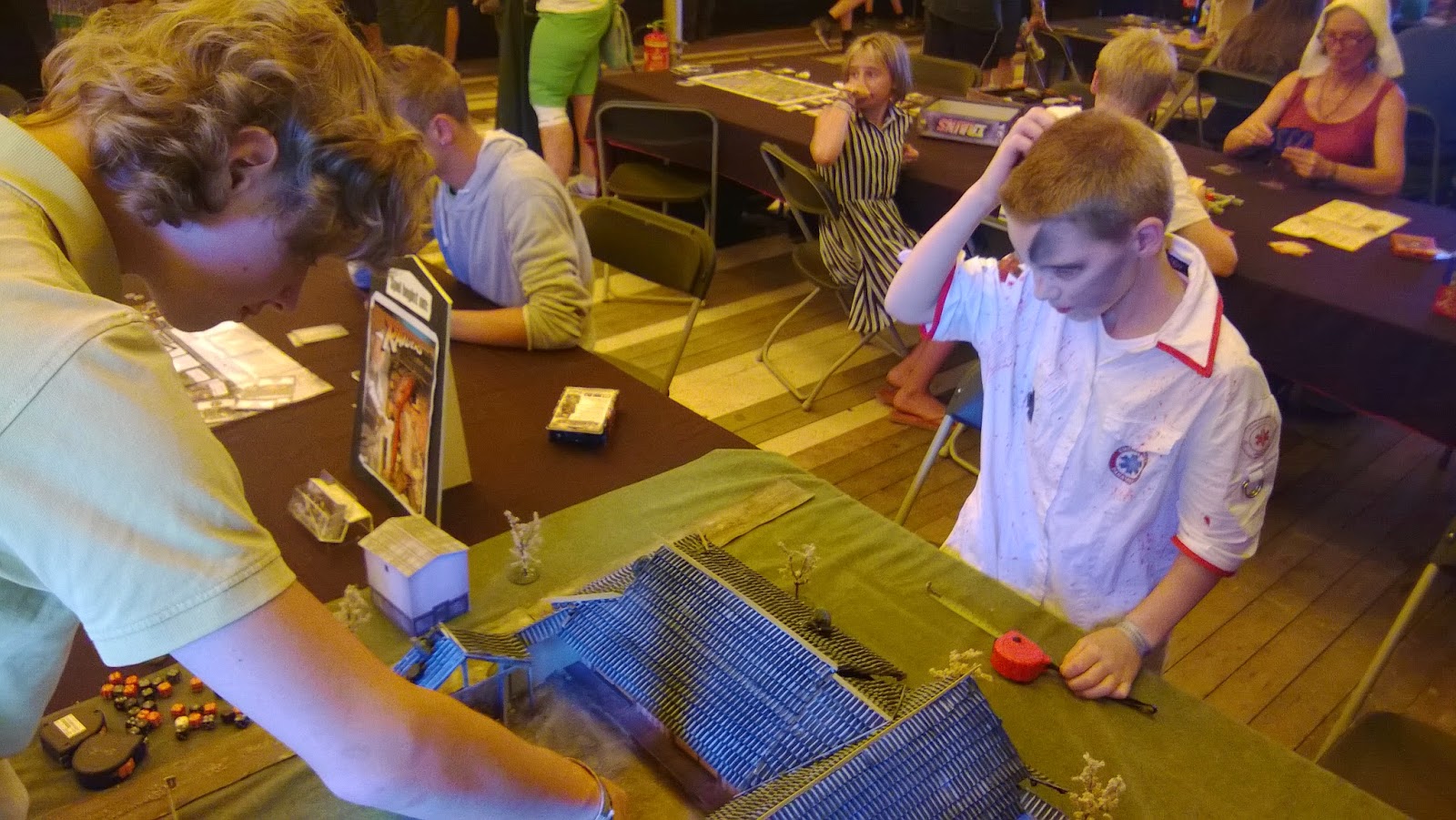 It was the first time I hosted participation games at a large festival. While the audience is obviously much more generic than at a games convention there was plenty of interest for my games and I did not want for players. It was hot and there were stinging flies (not usually encountered at a convention) and unfortunately there was a music stage 50 meters away. Despite being called “The Meadows” and “The field of folk” a lot of the performers fell firmly and loudly in the metal category which proved a strain on my ears as well as my voice, since you had to explain the game over the sound of roaring guitars and screaming vocalists. It nearly cost me my voice, but it didn’t spoil the fun though! 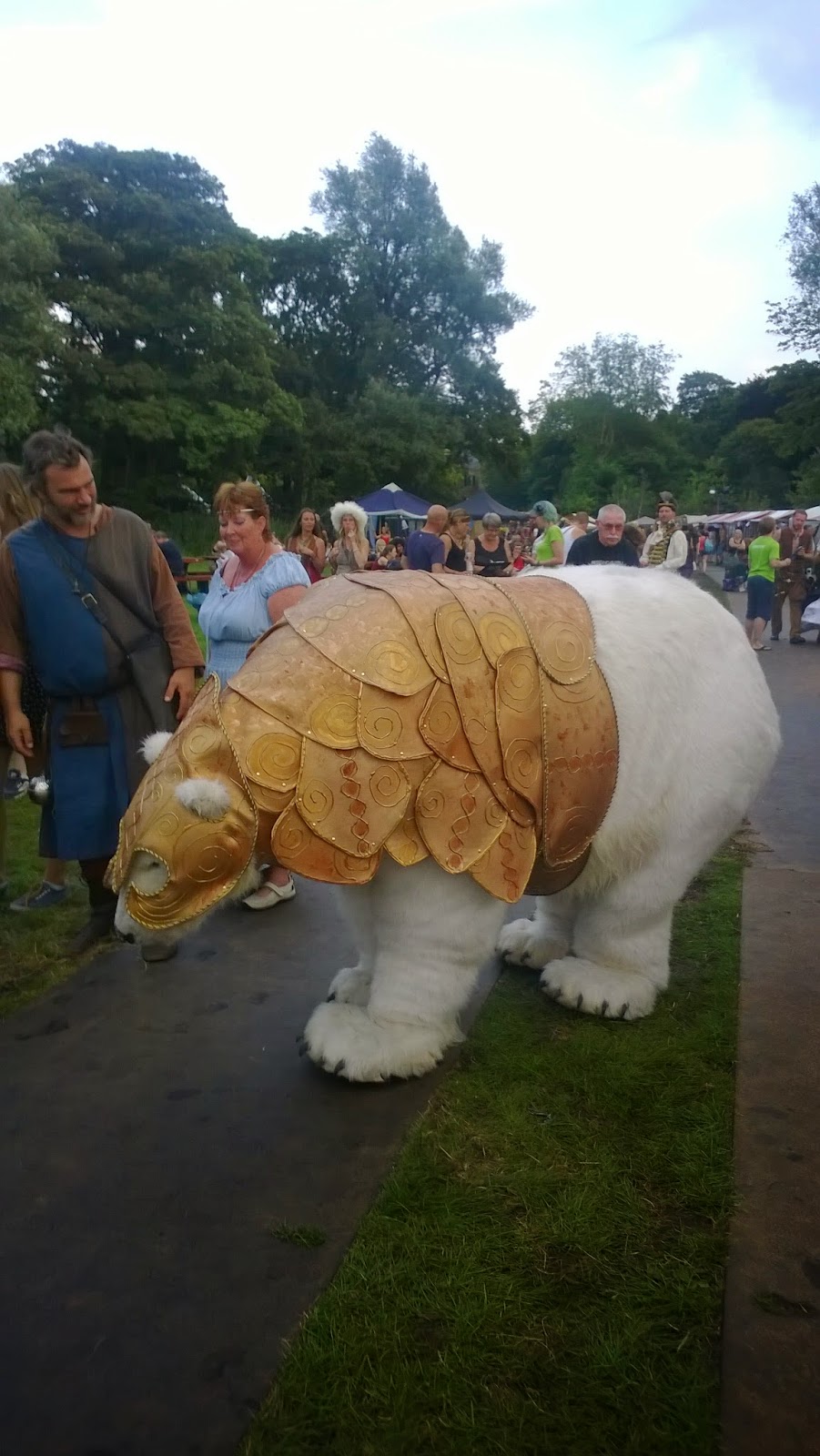 I have seen dozens of beautiful people all weekend, many of them in even more beautiful costumes, but the costume that really impressed me was this Armoured Bear straight from the Golden Compass stories! Two people were brave enough to operate it. And with a very humid 28 degrees Celcius this was no picknick!


Below three stalwart Subcrew members on their way to a well deserved lunch break. 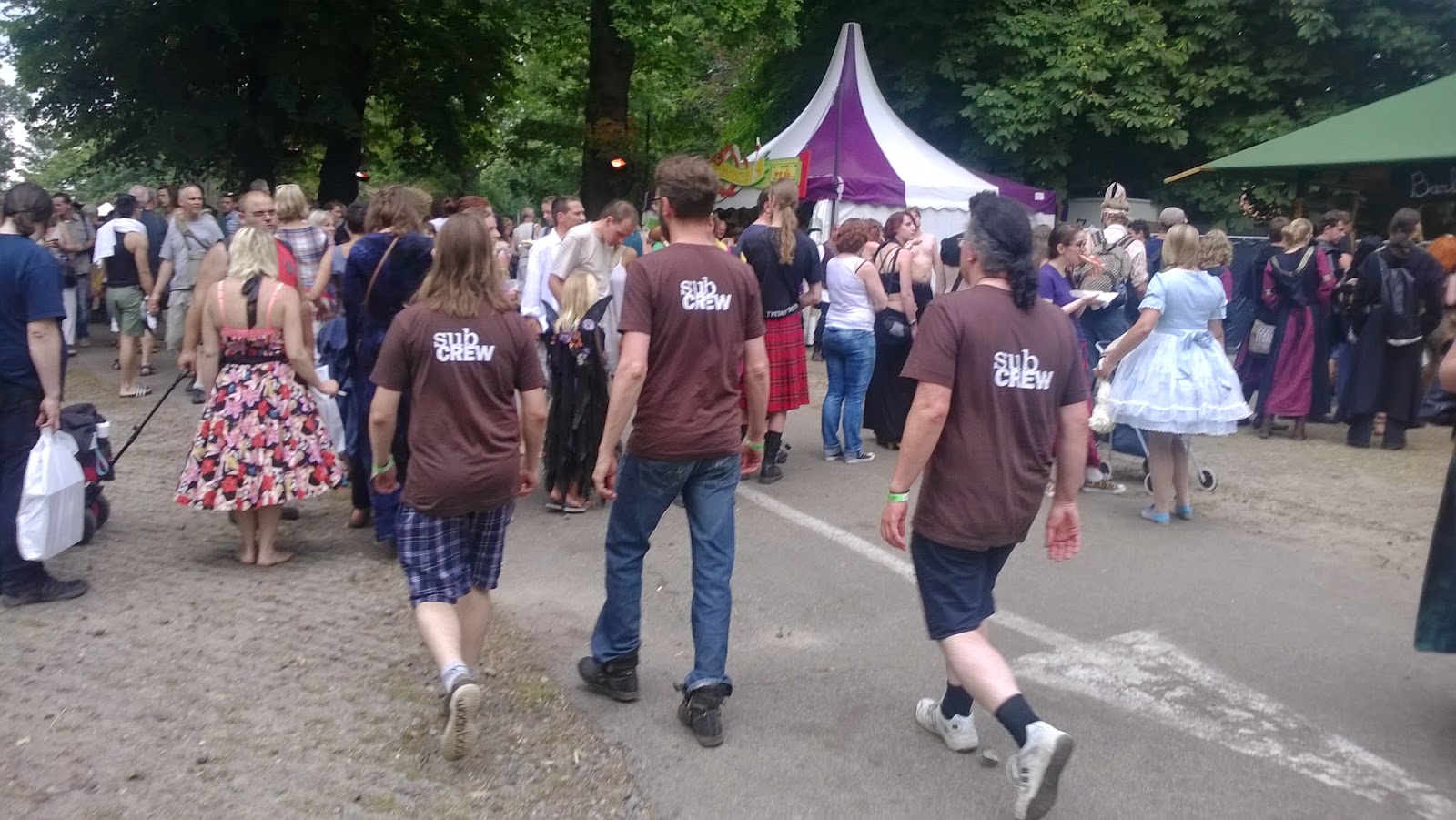 So with tired feet and vocal cords but thoroughly satisfied I returned home on Sunday evening having hosted nearly a dozen games. My sincere thanks to Subcultures and the Sub crew for having and supporting me and  providing me with food and liters of water, to Erin for the delicious fudge, to Madelief for bringing me cold and alcoholic beverages just as I needed them the most and to all the players who made the weekend a success!
Geplaatst door Pijlie op 1:31 PM 1 comment: