Last saturday we played a Tomorrow's War participation ﻿game at the Ducosim con in Amersfoort. Hosting the game proved a success and we played through the Bonaventure scneario from the TW rulebook three times. The Rebels scored one victory, the People's Republic two with a very narrow last one! 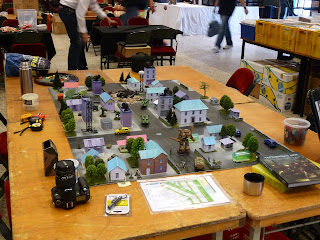 Here you see the table layout. The Rebels have exploded an IED under a patrolling Mech at the far crossing. Mission objective for both sides was to secure the Mech's data core; the Rebels by downloading it, the PR troopers by erasing it. I chose the scenario for its simple makeup and mission goals and the fact that you only play with infantry and one vehicle, enabling a basic use of the rules. 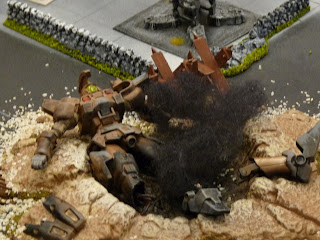 The crippled Mech, the mission objective for the game. 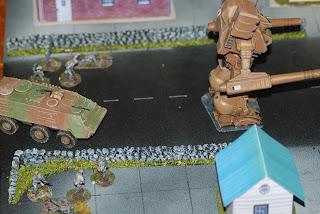 Some staged photo's before the game. I replaced the APC's from the original scenario with a Mech with basically the same stats to make the game look more futuristic. 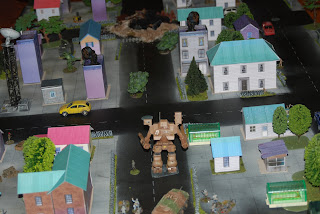 Here the game starts. The People's Republic advances with their Mech in the front. 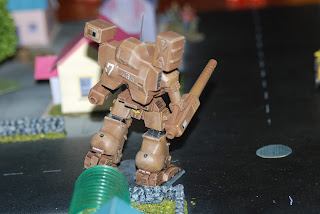 Rebels start at several "hot spots" on the table and will receive random reinforcements each turn. ﻿ 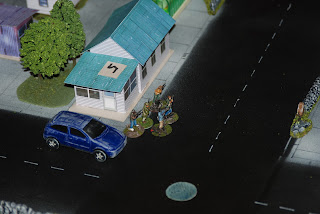 Here Rebels (very temporarily, as it turned out) secure the location of the downed Mech. 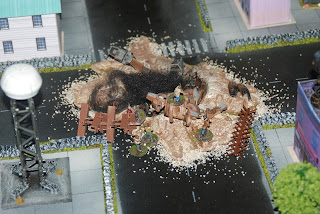 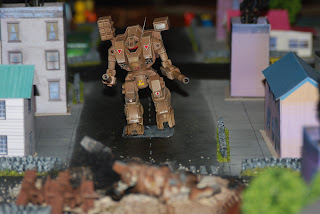 PR Troopers use buildings and copses of trees for cover while advancing. 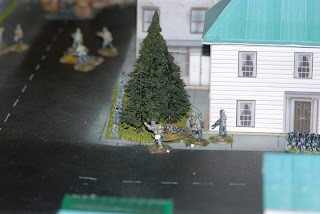 Rebels and the Mech race for the mission goal. The Rebels were occasionally equipped with RPG launchers that proved quit eeffective against the Mech, especially when they managed to maneuver in its back side, where its armour was weakest. In two games, the Mech was heavily damaged this way. 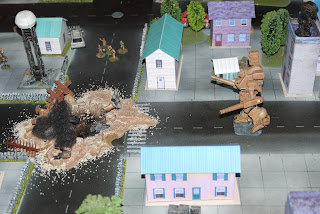 Not in the game (this time) was this gorgeous Arc Fleet grav tank by Critical Mass. More of my money will go that way, I'm afraid. Note that this bulky 15mm tank actually fits in quite well with the 20mm figures I use. ﻿ 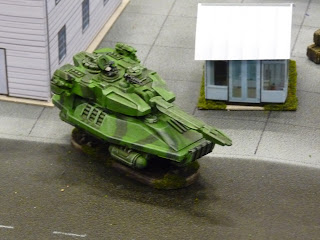 The Tomahawk/Warhammer Mech is a plastic kit by Bandai. Figures are plastic 1/72 by Caesar, that makes a fantastic modern range of figures. The two smaller walkers in the upper picture are 15mm ones by Rebel Minis, but are also very well suited for 20mm.

Houses are papercraft houses by Tony. Should they look familiar, most of them come from his Falklands pack. Unfortunately Tony's houses are no longer available and I have understood he has had problems with his health. I express my appreciation for his very well done 20th century houses and hope his health has or at least will improve.

As said, we played three games with 2-4 players aged 8 (I think) to mid-(sorry Bob if I do you any injustice here ;o) fifties. The rules proved to be remarkably intuitive and most players picked them up within 10 minutes or so.

The funny thing was that next to me a bunch of youngsters (harrumph!) staged a beautiful 15mm TW game with some stunning scratch-built terrain of with I was stupid enough not to make any pictures. With two TW games on one day, we can safely assume that TW has hit the Dutch convention circuit!

Last but certainly not least many thanks to Gerco for providing most of the pictures, transport for the day as well as assistance during the game!