Yesterday I paid my visit to THE annual wargaming fest in my region (this being the north-western European mainland): Crisis in Antwerp. There was much anticipation as it would be at a new venue. Would I like it, would I even be able to find it? As it turned out my worries were for naught as Miss Tomtom guided me without hesitation towards Hangar 29 in the Antwerp harbour. Bouncing along the most enormous cobblestones I have ever seen and dodging what I would swear to be bomb-craters in the road surface I arrived at the venue. Parking turned out to be a slightly creative process but I got lucky there by being bold and I finally entered Area 51, pardon Hangar 29!
This turned out to be two spacious and surprisingly pleasantly warm halls, well lit and filled with trader stands and gaming tables. Despite the large amount of tables and stands (and the growing number of visitors) one could walk and look around without copious use of one's elbows. And there was much to see as many an inspiring table graced Hangar 29's floors ! 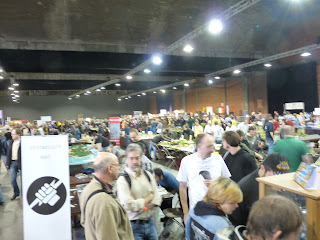 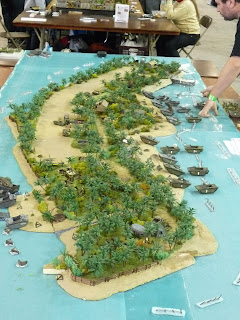 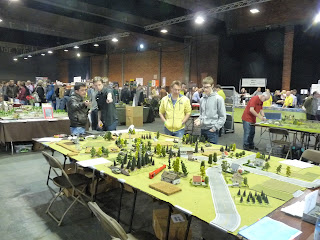 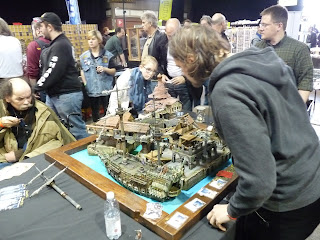 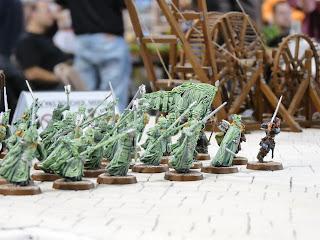 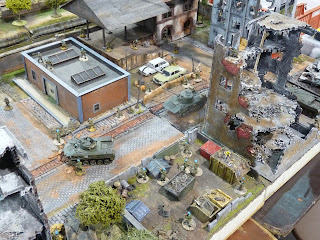 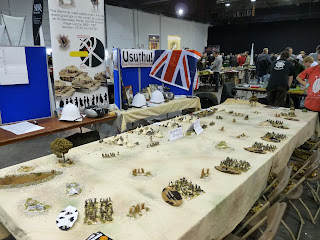 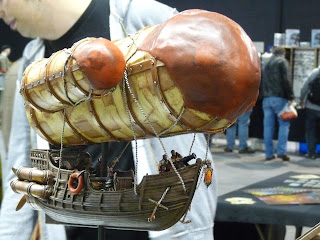 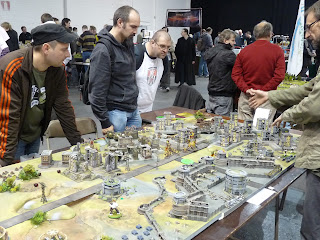 One big improvement was the bar: bigger, better, incredibly well-smelling (I love the smell of fastfood in the morning) and they accepted euros instead of those infernal chits. 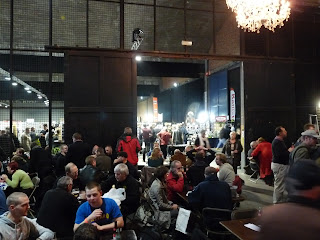 Being already warmed up for Dux Brittaniorum by the Meeples & Miniatures interviews I bought it on sight and then enjoyed the privilege of a demo game led by Richard himself﻿. Here you see him in action explaining and guiding the game with much clarity interspaced with tongue-in-cheek anecdotes. As it turned out our Britons started out making a firm stand on the hill in their famous shieldwall. Alas, an evasive move of our Warlord (Cedric the Fleet-footed) turned out so well he almost ran off the table, got attacked in the rear by the Saxons and spent the rest of the game running around (and away).
Our warriors and levy held firm for a few turns but then the warriors were mostly, well, dead and the levy decided that the fence needed painting, the hay had to be hauled in and it was time to turn home and be quick about it! Maybe cultural assimilation is the way to go for the Britons..... 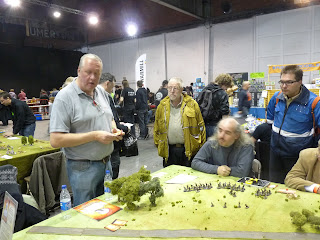 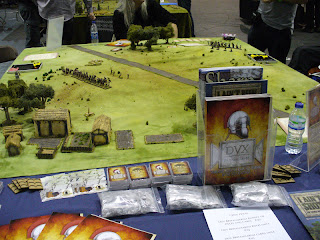 All in all it was a fantastic day. My feet and wallet were utterly exhausted and I returned home with much loot and the feeling of a well-spent day. As for purchasing I ended up with Dux Brittaniorum, Muskets & Tomahawks and some 20mm figures by Newline, a bunch of tanks by Critical Mass which got me a free copy of their SF ruleset!), a box of female zombies by Wargames Factory, a bag of musketeers by Redoubt, more 10mm pike & shotte by Pendraken and the latest armylist book for Hail Caesar. And of course the annual LE figure!

Thank you Tin Soldiers for staging this fabulous day! Please continue and try to maintain this venue as it is great. And don't hesitate to charge more next year if nessecary to do so! Remember it is a stingy Dutchman saying this!
Geplaatst door Pijlie op 9:57 AM 4 comments: