Save the Princess; Barsoomian style & En Garde adaptations for Barsoom

Last night we played a great little game of Barsoomian En Garde! The scenario started as a simple raid on an ancient temple of Issus full of Green Martian Tharks with a hostage princess.

The temple was truly ancient, since I must have made it sometime before 2000 when I still used cardboard and plaster. The thing has languished in my shed for at least 15 years and even smelled suitably mouldy for an old temple! 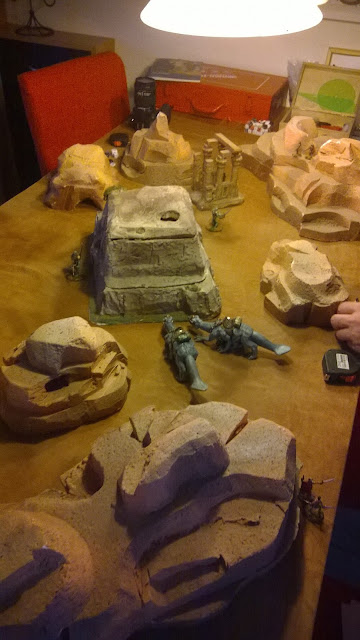 This turned out very dull, as the Tharks were simply shot down when they exited the temple and the final Thark inside killed the hostage. Duh.

So we turned it into a  tense sneak-and-stab scenario. Two sentries were placed outside and moved every turn on a scatter die + 1d6" movement. 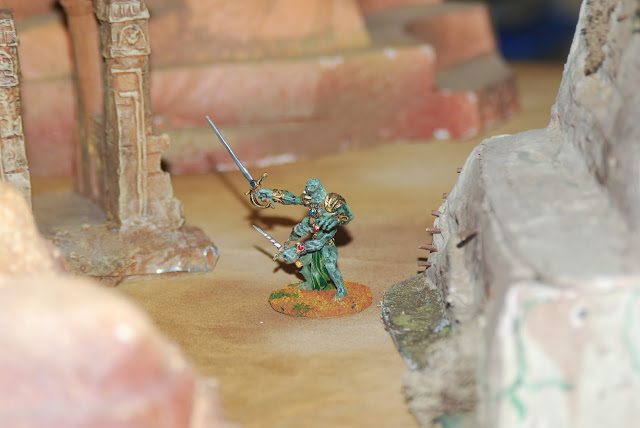 The Red Martian troops laid in ambush and a select few tried to sneak into the temple through a hole in the roof to extract the princess or protect her during the raid. The Red Martians had Initiative as long as they were unnoticed. The Green Tharks inside the temple did nothing as long as the sentries did not raise the alarm. 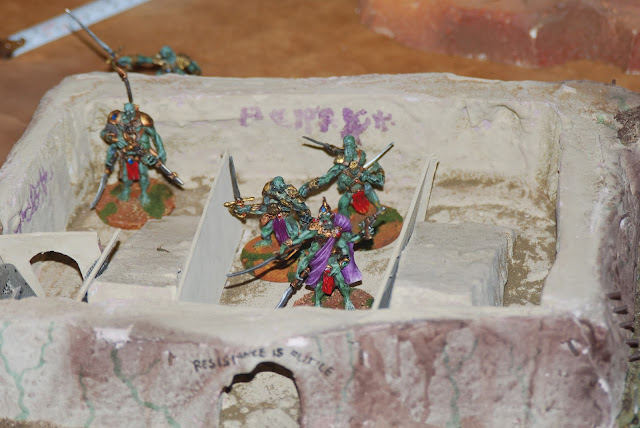 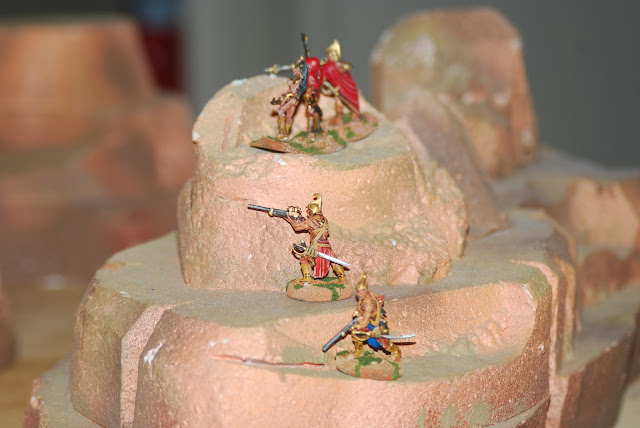 The second game used this adapted approach. One of the two Red leaders (a Jeddak) and a trooper evaded the sentries and tried to climb into the temple. The Jeddak succeeded but the trooper fell and alerted the sentries. 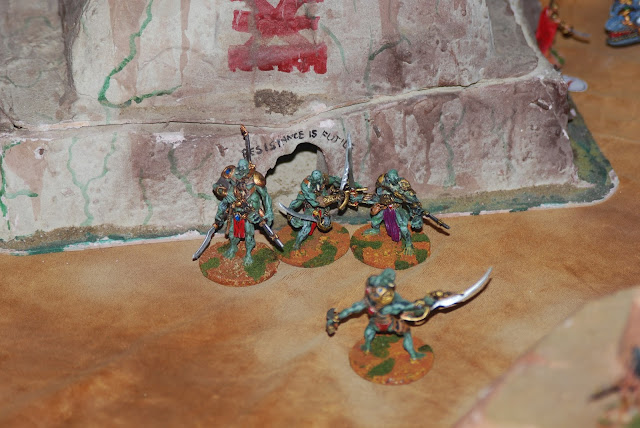 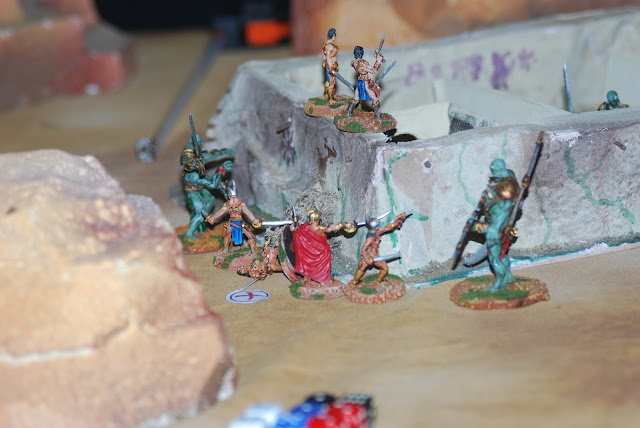 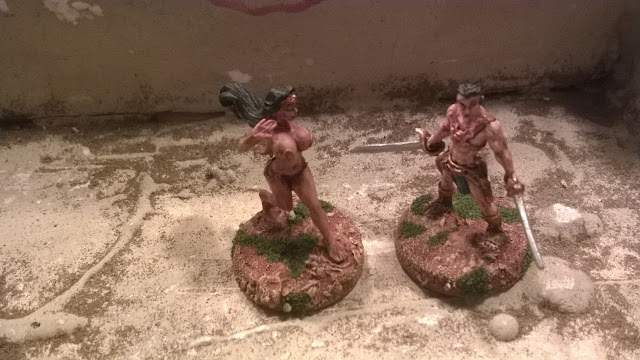 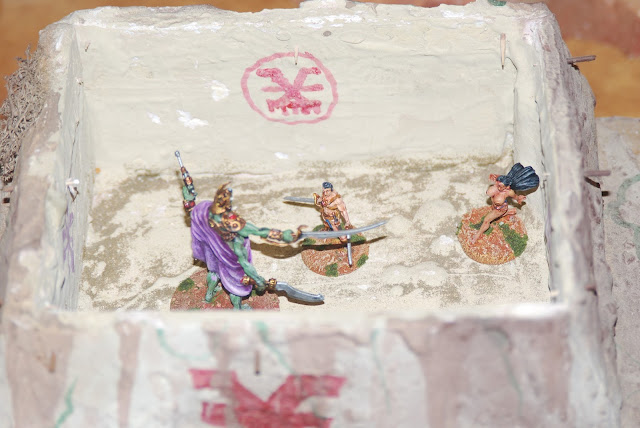 While the Reds stormed the temple, the Thark leader ran upstairs to the hostage and was valiantly met by the Red Jeddak. Who was subsequently cut inhalf in the following duel. Duh....

The third game showed some improved tactics. Red Martians ambushed all around the temple en the two Red leaders snuck and climbed into the temple. 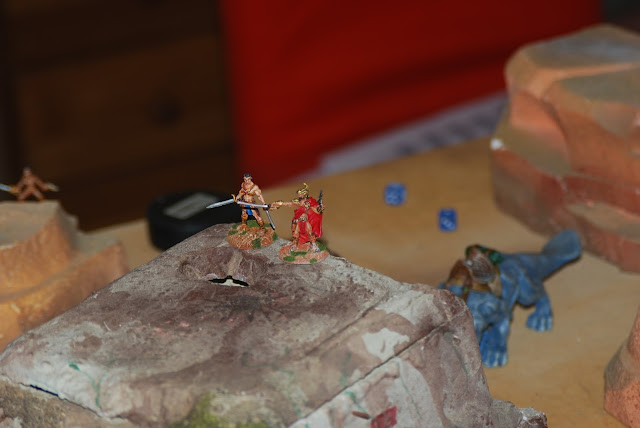 Succesfull this time, thanks to their higher Initiative. Once inside, they decided to extract the Princess instead of defending her during the attack and they succesfully made it out of the temple and unto the roof again. As it turned out, a fateful decision.... 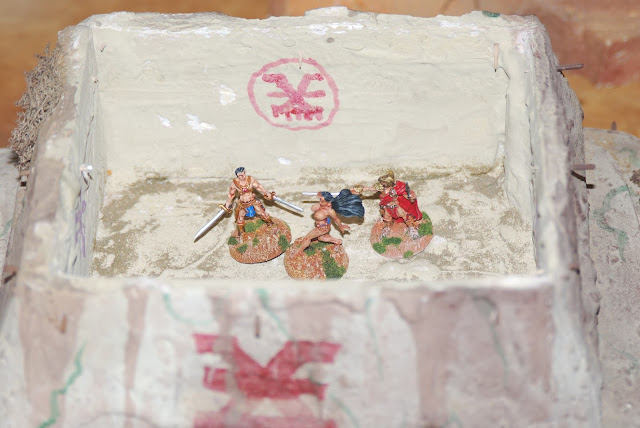 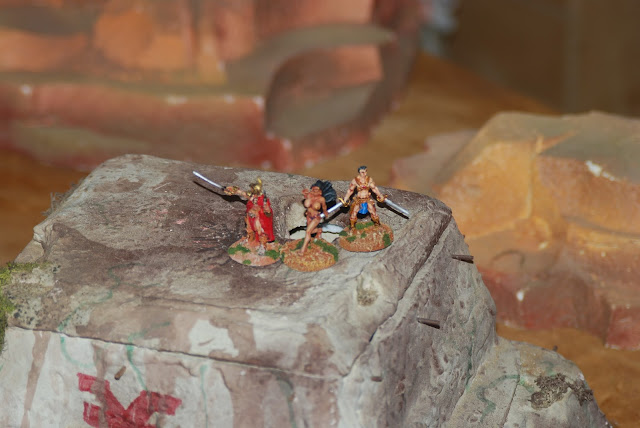 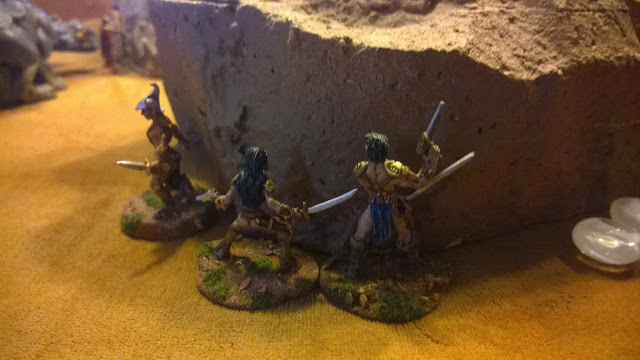 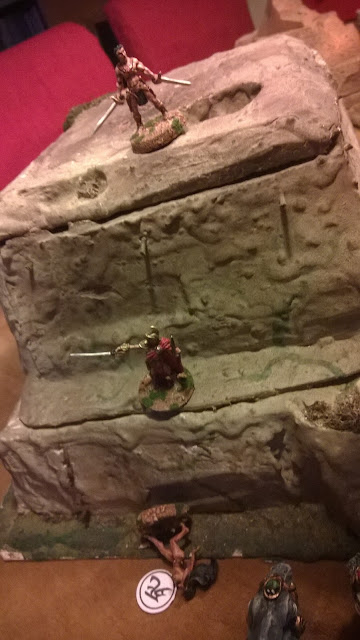 Unfortunately for the Martian Red royalty, the princess failed to make her climb rolls during the descent (twice!) and plummeted to her death. Damn!


Again, the En Garde rules proved perfect for playing Barsoom with only minor adaptaions shown below:

These rules are intended to take the player to the wastes of Barsoom as written about by the great
late Edgar Rice Burroughs. In these stories, Mars is a dry and dying planet populated with exotic and
warlike human and alien races, ancient civilizations and bizarre wildlife. In recent decades these
stories have spawned a lively VSF background which unfortunately is not very compatible with the
original JC stories for various reasons. Therefore there will be some suggestions to stick to one of two specific canons.

Victorian Science Fiction Canon:
This is the most versatile of the Martian universes. Here, like in the Space 1889 backgrounds, Mars is
essentially an unexplored territory where European peoples boldly go where no one has gone before.
They fly to Mars in Aetherships and explore the surface of the Red Planet in caravans and liftwood
skyships, encountering the native civilizations much as European explorers did in the 16th to 19th
century in Asia, Africa and Meso- and South America.

Humans in this universe have no special powers on Mars, beside the fact that they might be
technologically more advanced than most of the Martian natives. These natives are mostly humanoid
beings, some bipedal, some winged, living in city states or tribal structures. Their level of civilization
and technology is comparable to Late Medieval/Early Renaissance Earth. Wargaming on VSF Mars is
essentially a fantasy kind of colonial gaming on another planet.

John Carter or Barsoom Canon
True to the ERB stories, here Mars, called Barsoom by its inhabitants, is much like in the VSF canon.
The Martian races are mostly humanoid, divided into red, white, black and yellow humanoids. Next
to these live the giant six-limbed Green martians, originally constructs of the ancient White Martians,
the current Therns. There are however some essential differences compared to the VSF canon.
First, Mars cannot be reached by space, but only by very rare and inaccessible portals which
transport one’s energy form to Barsoom and transform this into a human body. Few humans manage
to make this crossing, the most famous of whom is American Civil War hero John Carter. Earthlings
on Mars are therefore rare. If not unique.

Second, due to Mars’ light gravity Earth-born humans’ muscles gain greatly enhanced strength that
essentially turn an Earthling into a minor superhero, capable of making huge jumps and other feats
of strength. This effectively prohibits playing with lots of Earthlings, since what fun would playing an army of superheroes be?

Thirdly, the human civilizations of Barsoom are technologically more advanced than contemporary
Earth civilizations. They are centuries old, aided by the much longer lifespans of Martians who can
easily reach over 500 Earth years of age. They employ enormous flying ships, energy sources of
unparalleled power and even have found a way to provide the dying planet with an artificial
atmosphere on which all life on Mars is dependent.

All Martian races are very warlike and adhere to warrior’s codes of honour that proscribe chivalrous
behavior in combat.

Red Martians
The technologically advanced red-skinned inhabitants of the moderate regions of Barsoom populate
a number of city states, among which Helium and Zodanga are the most powerful (and rivalrous).
Red Martians have mastered flight and energy-powered firearms.
Red firearms are semi-automatics and count as rifles and pistols in En Garde! They need never be
reloaded, as they employ tiny, highly energized radium bullets that explode on impact and do a
disproportionate amount of damage to their size.

Red Martians basically folow human stats as used in En Garde!. Red Martians may never choose armor. May be mounted on a Thoat (+10). May use skyships.

Green Martians
The 10 feet tall green-skinned and four-armed barbarians of the Barsoomian wastes and deserts are
feared all over the planet. Massively strong and tough and ferocious in combat they are literally bred
for war, as the ancient white Martians constructed them as artificial warriors and laborers. They
roam the deserts as nomadic tribes on their big Thoats and inhabit the ruins of old abandoned cities
that litter the surface of the dying planet. They war with everyone, including each other, with
barbaric customs like torturing and eating their defeated opponents. They should be viewed as
fearsome adversaries in combat.

Having an inbred knack for military technology and combat medicine, they employ surprisingly
advanced weapons for their barbaric demeanor.

Green firearms are more primitive than their Red counterparts. Rifles are powerful singe-shot breech
loaders that need to be reoaded. Due to their size, they are even able to damage flying ships with a -2 modifier. Pistols are simple revolver designs that do not need to reload and are comparable to a red pistol.

· Critical Wounds have the normal affect.