This weekend I played my latest participation game: Night at the Slaughtered Lamb (extra points for those who know which movie that one comes from) at Ducosim. It was a Witchfinder General game for 4 players with some RPG elements thrown in. What was happening? 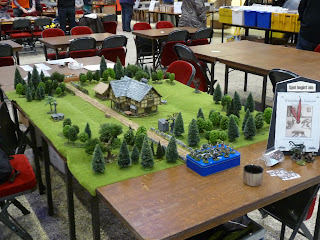 This rustic tavern deep in the woods has become the last refuge of an evil witch. Hunted by the Witchfinders she has hidden in this tavern; The Slaughtered Lamb, killed one if its inhabitants and has glamoured herself into his or her form. It is the Witchfinder's task to find her out and prevent her escape. However, the other guests are not to be harmed, night is falling and sinister shadows growl and skulk at the dark forest's edge.... 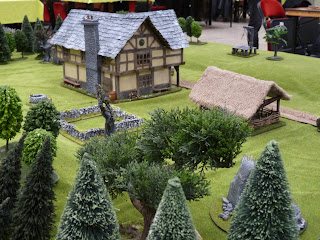 The Witch player(s) control the five guests (the witch among them) that start inside the tavern and the monsters that start at the forest's edge. The Witchfinder player(s) start inside or near the tavern, ideally surrounding it with their musketeers. The Witch may use her monsters and (to some extent) the other tavern inhabitants to draw attention away from herself so she can slip out of the tavern and dissappear in the dark forest. The other inhabitants are of course in awe of the armed witchfinders, may not initiate violence and such, but may otherwise act as suspicious as possible. As soon as the Witch reveals herself (by magic or violence for example) her miniature (only the Witch player knows which one) is at once replaced with a Witch figure. 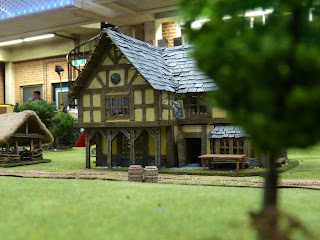 The Tavern from a Noctelingers point of view. 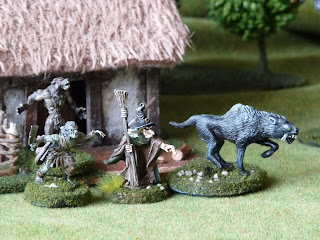 Noctelingers and Werewolves aid the Witch from outside the tavern, arriving at sunset. 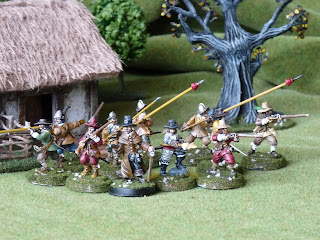 The Witchfinder and his musketeers. 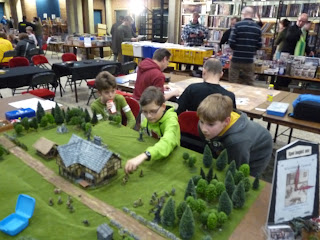 Here is the only picture I managed to take of the game in progress. Running a game with four enthusiastic and noisy players with some audience thrown in leaves little time for taking pictures, so I am glad I managed this one. (This is also my excuse for the gratuitous use of older pictures in this blog....)

I ran three fully manned games in a row, had a lot of fun and some spectacular endings. The Witch managed to dodge the bullets once, got shot once and in the final game, while still disguised as the innkeeper, got ripped apart by one of her own Noctelingers (the monsters were played by a second Evil player) before the Witch player could call out a warning! I didn't see that one coming....

A great day with a great audience and a great little ruleset!