Conan 3D the Board- pardon the tabletop wargame

As a tabletop wargamer I have been toying with the idea to translate Conan to the tabletop with as little change as possible. I suspected it might yield a quite decent skirmish game that way. And it would look even better on a 3D tabletop! 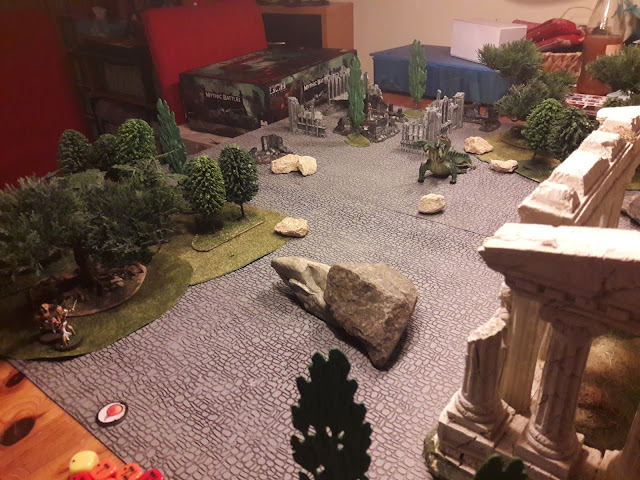 When replacing the board with a 3D environment one needs to replace the board’s funcionalities with environmental rules. Here's what I have thought up:

Speed & Movement
The figures’ speed is their Movement factor combined with the board’s areas. I don’t want to change anything in the use of the dashboards so the changes must happen in the translation from board to tabletop. 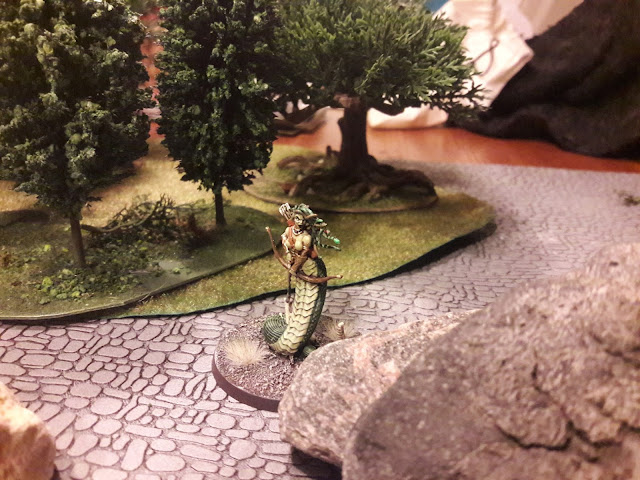 This is best accomplished by translating the Move factors to fixed Move distances on the tabletop. An average board area is about 5” across so this seems a good standard distance. I use CDs cut in half as pre-made rulers during play to avoid measuring tapes and such.

Proximity
In the board game this is facilitated by the board areas. Figures can interact with all figures and objects in the same area and are Hindered by them. 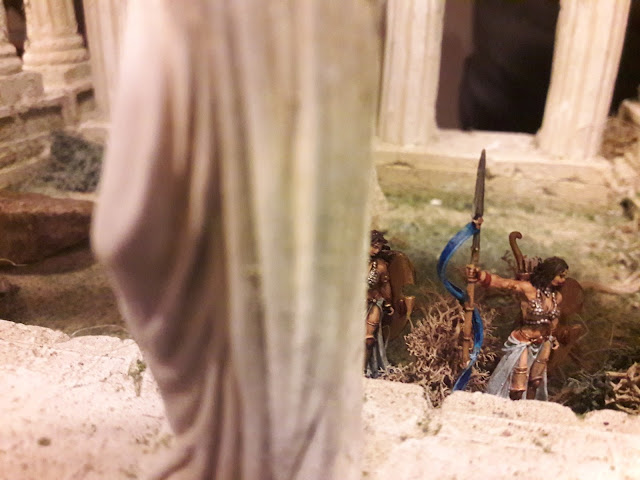 Using similar distances as in Movement figures may interact with and are Hindered by all figures and objects within 5”/can be covered by a CD’s disk. 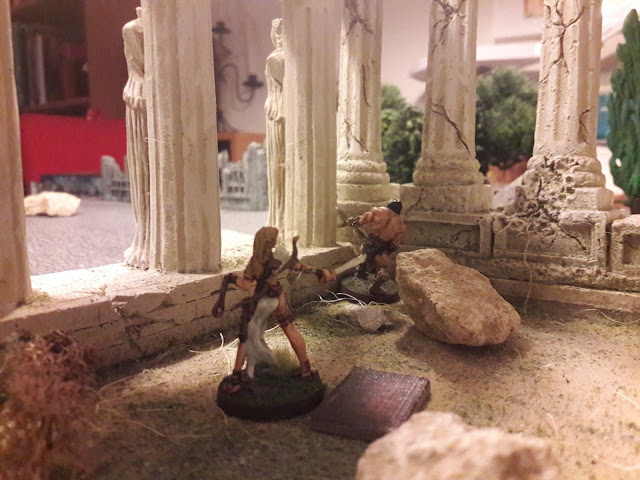 This seems easy, as physical terrain pieces will block line of sight instead of the LOS dots. In the boardgame terrain is either Blocking or not. Not wanting to add any fundamental changes to the game this means that no rules are necessary regarding partial cover and such. 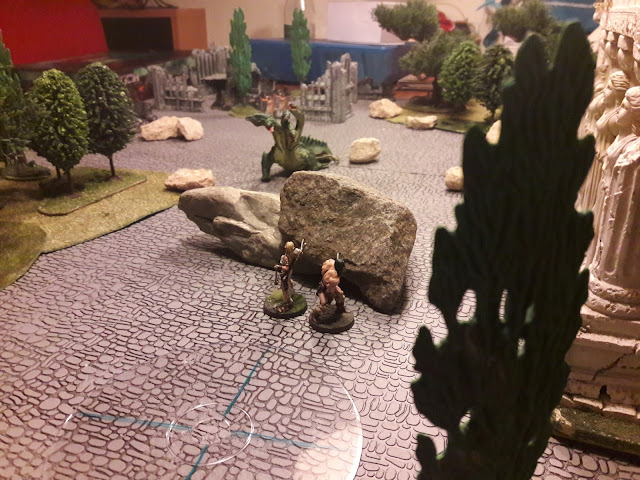 Since the dots are now replaced by the figures’ relative position to each other, LOS will become more complex and influential.

We used The Amazon's Dragon from the Mythic Battles/Conan crossover set as a test scenario because the terrain could be easily represented with my own collection. It played perfectly and retained the exact same feel as the boardgame but with more freedom of movement. The scenario is a real cliffhanger so it went undecided in both test games up until the last turn.

Care needs to be taken that the table doesn't get too big as Conan games need to be finished in a set number of turns and distances need to be covered in about the same time on the tabletop as on the board. Apart from that (and building copious amounts of terrain) it all went smoothly.

So in building more terrain for this game there is even more fun to be had from this great game! 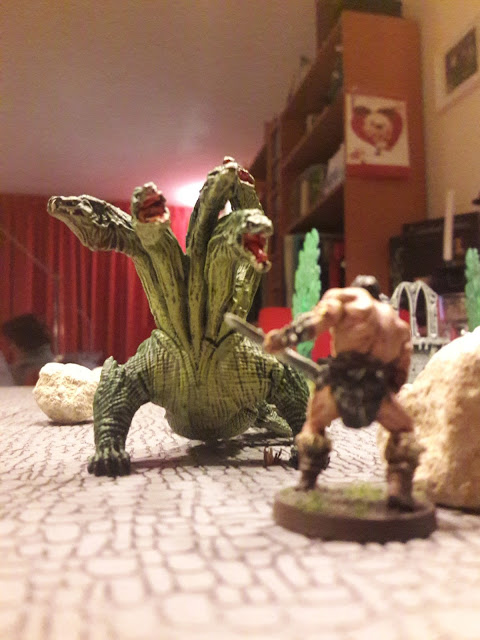 *****Stars Review! Pedal to the metal to get Gaslands! 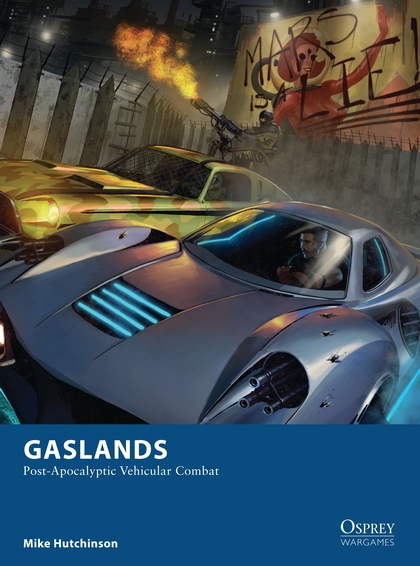 Not for the first time on this blog will I sing the praise of the Osprey rulesets. One of their latest publications once more proves that, in the immortal words of Goethe: "Limitation shows us the master". 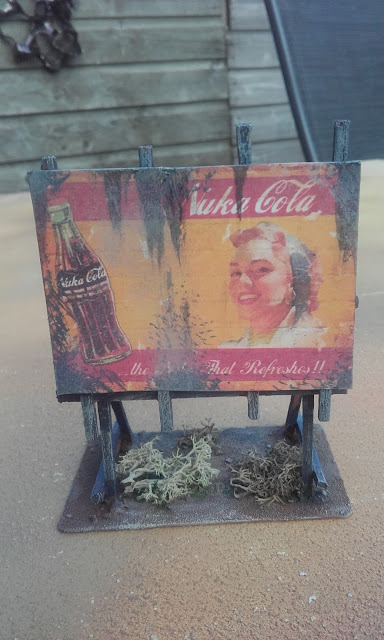 Despite their diminutive format, limited 64 pages and Not-Always-50+-Friendly fonts their choice for Gaslands is an excellent one!

Readers of this blog will know that I collect rulesets and am always on the prowl for that elusive combinaton of innovative rules, fast play and fun games. This is such a combination. 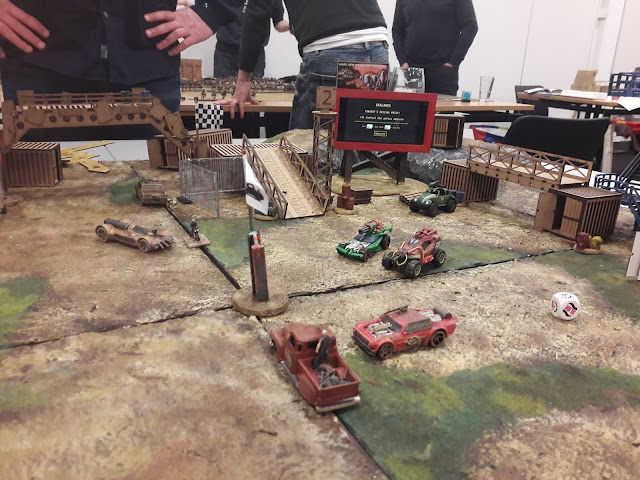 Gaslands is about racing in postapocalyptic cars. Think Mad Max meets Death Race 2000. The fluff is minimal (capitalistic Martian plutocrats enforce their dictatorial rule over Earth's population through racing games) but let's be frank: postapocalyptic car racing is its own fluff and doesn't need any other. The game's theme is actually the only thing that isn't innovative, since postapocalyptic car racing has been a love interest for a growing number of people ever since Roger Zelazny wrote Damnation Alley in 1967. 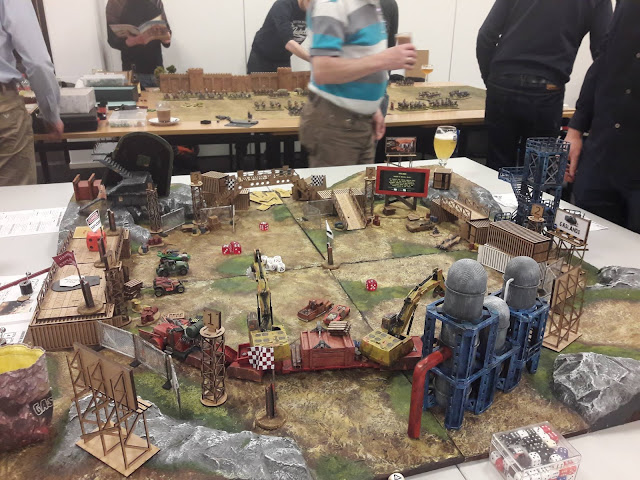 Enough about fluff. Let's get to the rules! 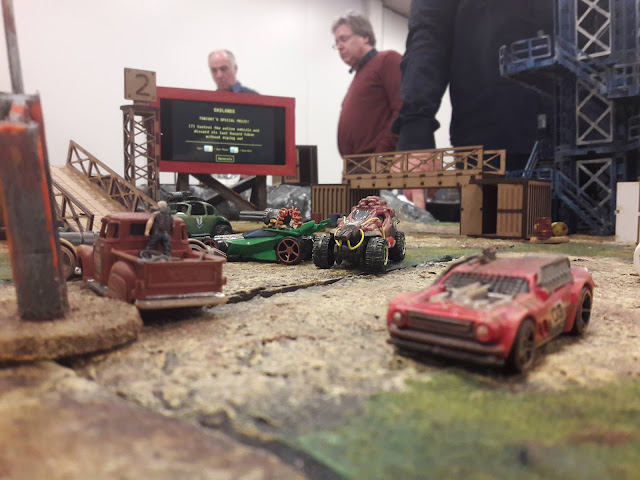 Gaslands is built up in turns which are in turn built up in 6 Gear phases. Players take turns (the First Player or player in Pole Position usually changing each turn) to move their vehicles. The higher the gear you drive in, the faster you go since you must move a vehicle in the Gear Phase that is equal or lower than your current Gear. So a vehicle in Gear 3 moves in Gear Phases 1 through 3 and a vehicle in Gear 6 moves in all of them. Once you complete the move of the vehicle, the vehicle may fire its weapons if it has any. 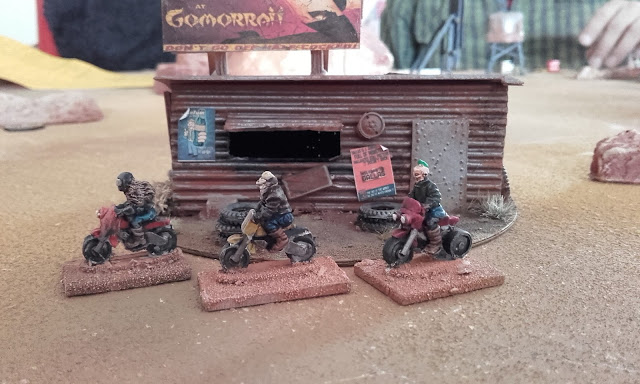 Shifting gears
A vehicle may roll 1 or more Gear Dice up to its Handling Factor. These dice give you either maneuvers or the opportunity to change Gear. The more Gear Dice you roll, the more options you will have and the more maneuverable you become. Or... the more risks you take to skid, slip & spin... Since you can cancel unwanted maneuvers with Shifts, but also need Shifts to accelerate and stay in the higher Gear Phases and never know how many Shifts you will roll, there are all sorts of choices to make. 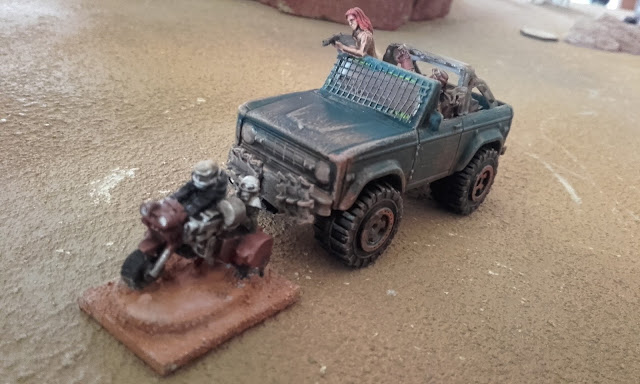 Maneuvers
The vehicles move along movement templates that differ with the gear you drive in. Your maneuvers can be spoiled in all kind of interesting ways with Slides and Spins, although these not always yield unwanted results. It's just a matter of whether that collision is desirable now, or a bit later....

Depending on the maneuver and the current Gear you get either bonus Shifts to enhance your maneuverability, or Hazard counters. Hazard Counters can be discarded with Shifts, but when not, stack up and as soon as you collect 6 your car will "Wipeout" as you lose control and the vehicle comes to a standstill in a cloud of swirling dust (when you are lucky) or a ball of flames (when you are not!).

You need higher Gears to stay in the turn, but also to acquire some maneuvers that are only allowed in higher Gears 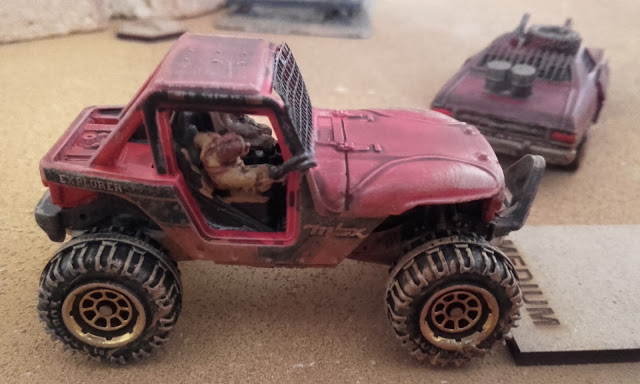 Models and scale
Gaslands is essentially scalefree. However the author encourages to use Hotwheel scale (if there is such a thing) cars to play with. The advantage is that these are roughly 1/67 scale which can be combined with 20mm figures and terrain. As you can see you can really go to town building all kind of terrain. 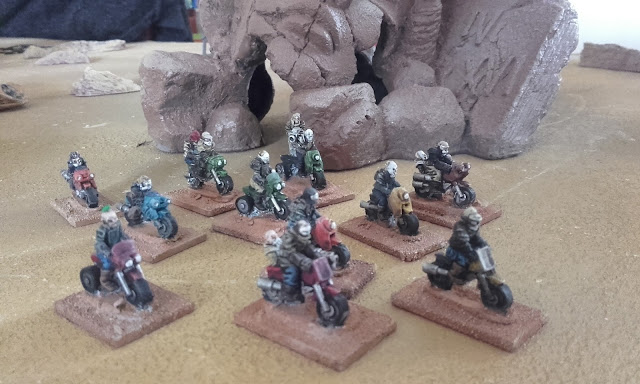 Damage
Damage is caused by collisions, less succesfull wipeouts and enemy fire. This uses a simple system of chassis squares. Once they run out, you have been Wrecked! 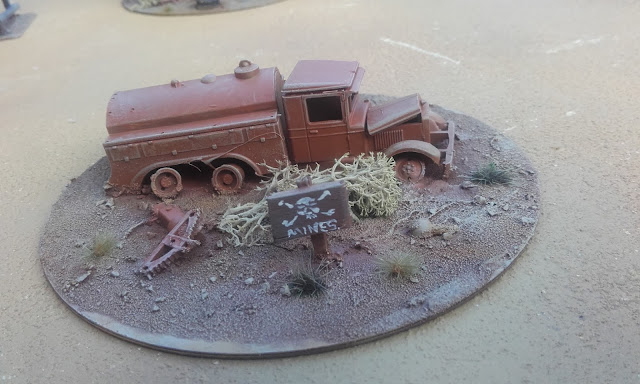 Suffice to say this game is heartily recommended! 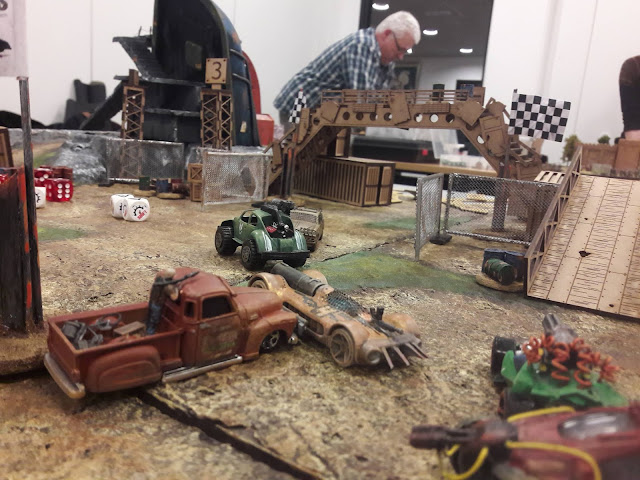