Because painting Vietnam War figures tends to give you a slight allergy for the colour green if not done with some temperance, I schemed to use this bit of medical fabrication as an excuse to buy a few of the magnificent Lucid Eye figures made after the paintings of the great, late Frank Frazetta.

I decided on two of his signature figures: the Death Dealer and The Egyptian Queen. 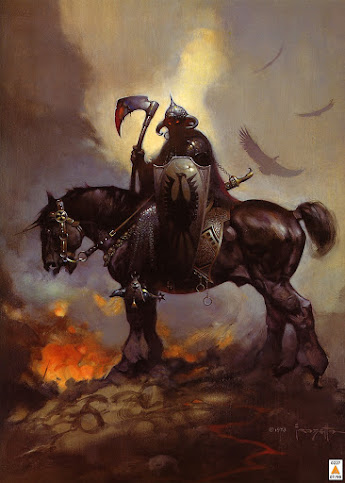 Pictured on rock albums, book covers and leading to an entire visual and comic book franchise the Death Dealer is one of Frazetta's most iconic figures. 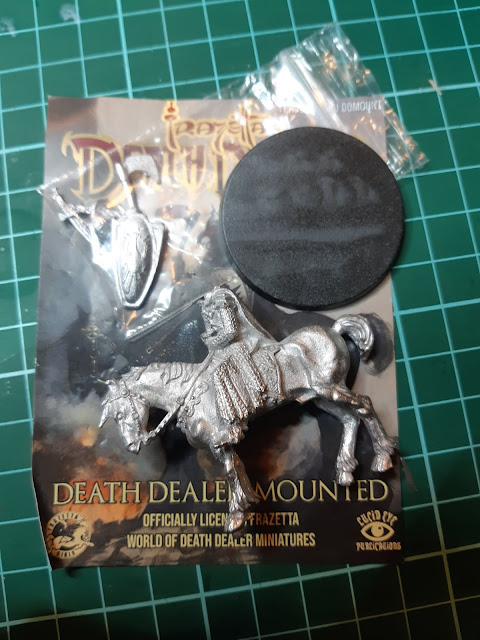 The figure's sculpting and construction is excellent. For your money you get a white metal 5-part casting plus round base. The parts are: horse-and-warrior body, right hand with axe, shield, sword in sheath and the helmeted head. 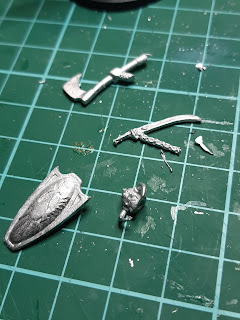 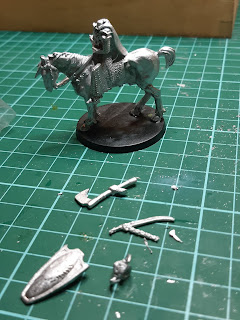 Detail is excellent and very faithful to the painting. You would really have to look for differences, most notably the pattern on the saddle cloth. 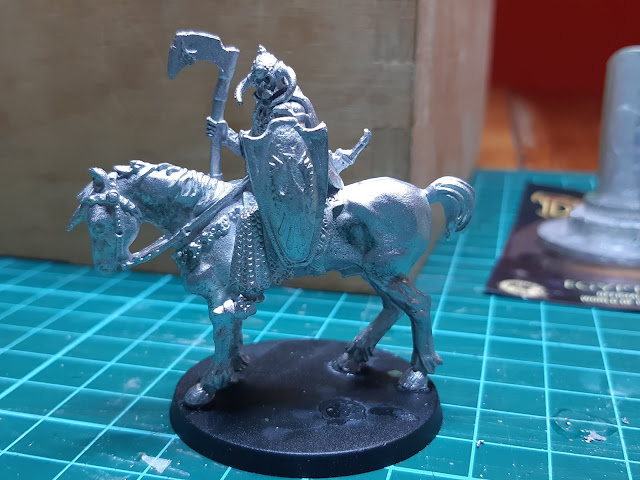 Casting is pretty clean. A bit of sanding of the helmet and the connecting surface of the right wrist and everything fitted nicely. The base is a simple flat disc that can be substituted with a scenic base if desired. I chose to fluff up the base from the blister with green stuff and sand. 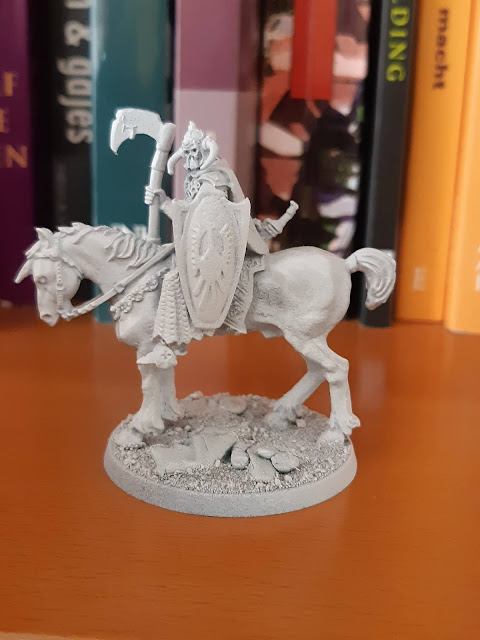 The Death Dealer paints well. Detail is fine at places and the fact that in the painting he seems to be made partly out of darkness and shadow pose a challenge but using a lot of greys, blacks, inks and metals turned out well enough for me. 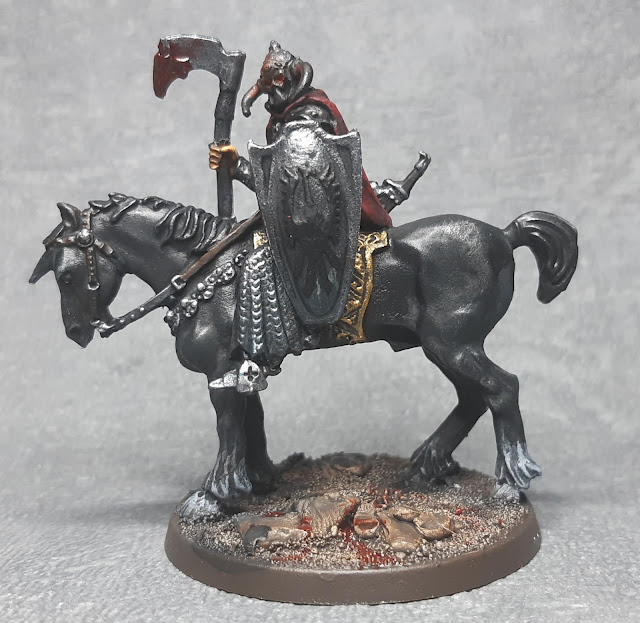 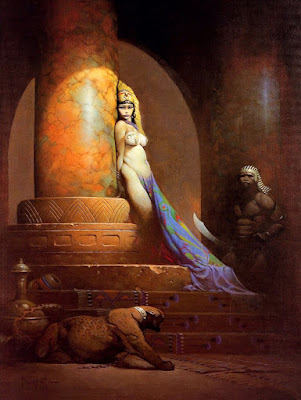 Originally painted as a cover for the horror magazine Eerie in 1969 this is also one of Frazetta's iconic paintings and in 2019 sold for 5,4 MILLION dollars. It is one of his more tensed paintings, really suggesting a story with the brooding figure of the queen, the snarling leopard in the foreground and the hulking warrior looming out of the shadows in the background. It is also a lot more colourful than the Death Dealer, hence my choice. 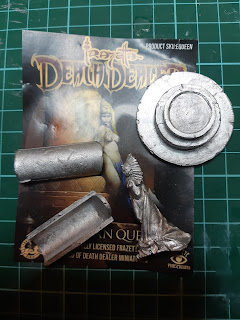 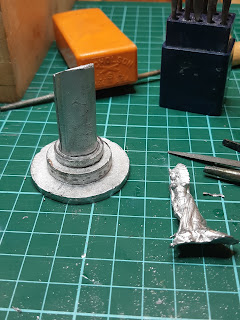 Sculpting of the Queen, I am afraid, is not excellent. Which is not to say it isn't good. But the figure has problems. 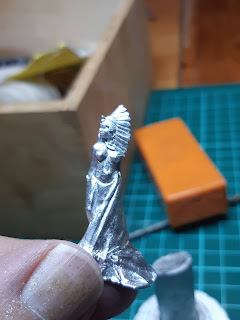 The first I think is caused by the choice of the parts. You get a pedestal, a column in two halves and the figure of the Queen.

The detail on pedestal and column is a bit shallow and really needs careful inking and painting to show properly. The halves of the column do not fit together very well and need extensive filing and filling to fit. There also seem to be traces of a fingerprint in the casting of the column that only showed up during drybrushing. Crap. 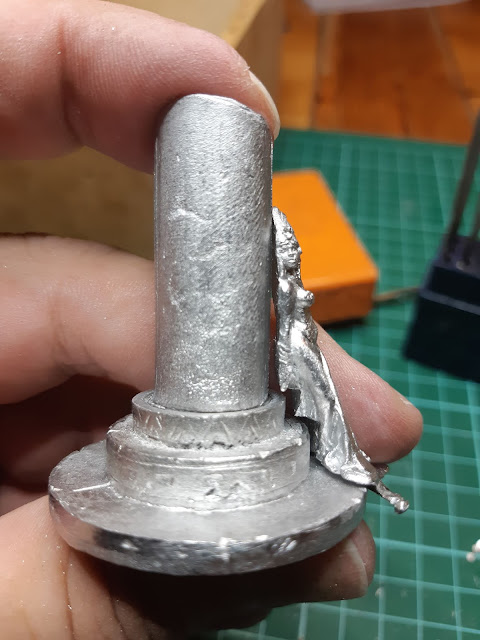 The main problem however is the figure of the Queen. This is a one piece casting of extremely rigid material. Bending it proved impossible without resorting to hard tools, which I did not dare to do for fear of damaging the sculpt. 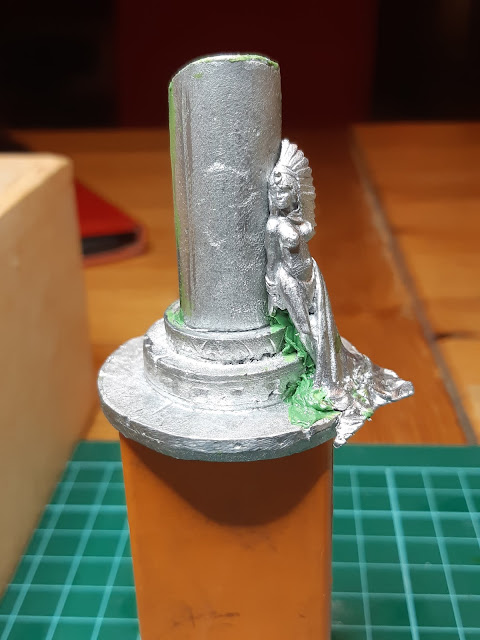 Being a separate casting one would expect the figure to have a lot of dimension (no gratuitous jokes please!) but as a matter of fact it is quite flat. With these dimensions she might as well have been cast against the column instead of separately.

This was probably done to create the possibility to paint her separately but the fit is so bad you have to sculpt her to the column before you can attempt any painting. And then of course she is stuck to it anyway. 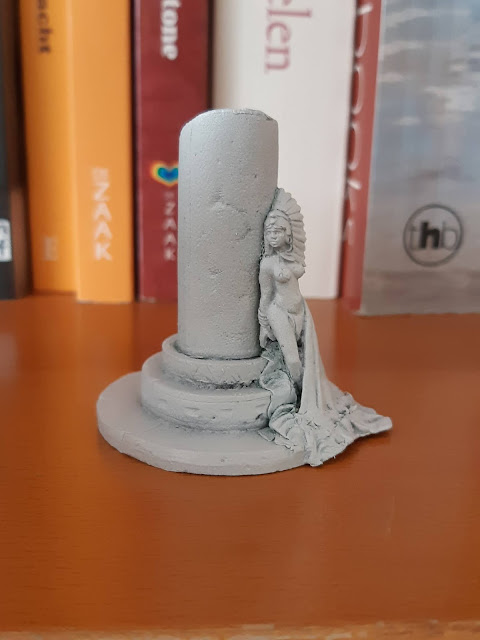 Maybe people more skilled than me could do this without attaching her to the column but I couldn't. So in the end you still have to paint her as a one-piece casting that doesn't have any benefit from the fact that she actually comes in four. There is no overlapping shape or depth that would have prevented a one-piece casting. So, apart from saving on casting material, the choice for a 4-piece figure puzzles me.

Detail on the Queen is a bit shallow and the garment isn't very detailed. Just a sheer piece of cloth collecting in a shapeless heap at her feet. So painting needs to be done carefully with a lot of glazing. Finishing the eyes is difficult with her head resting against the column.

Her pose, unlike that of Death Dealer, does not quite capture the pose on the painting. There she tilts her head slightly towards the viewer, looking at him intently. But here the figure actually leans back, away from the viewer. 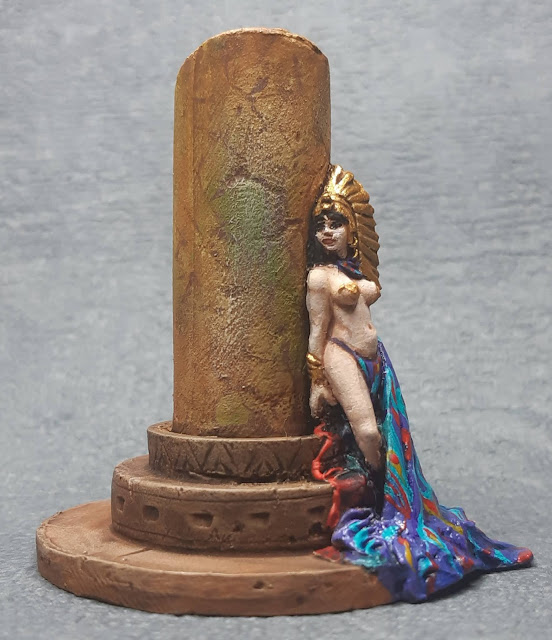 Still painting her was a pleasant challenge and didn't turn out half bad. But with regards to the Queen: be warned. She takes a lot of work to turn out well.