Wellington: the years of the sword

While I had never before encountered the name of Elizabeth Longford, finding this little book of hers in a magnificent secondhand bookstore in Den Bosch for a few euros proved a pleasant coincidence. 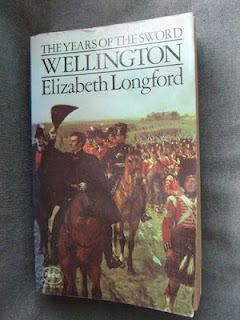 In some 600 pages the youth and earlier years of Arthur Wellesley´s life are narrated in lively detail. From his distant parents, his youthful ambitions as a violinist and his stay with the Ladies of Llangollen (a curious pair that might have been Europe´s first acknowedged lesbians) to his years in India, his striving for command and his first successes there and his first brief political career, the campaigns in Portugal and Spain and his ambassadorship in Paris you will get a interesting take on this strangely modest and at the same time deeply arrogant man. His thoroughness and competence set off against his often awkward social behaviour, clunky marriage and blunt speech must have been a challenge for his contemporaries to deal with. It left him with numerous admirers nevertheless, male as well as female for whom his awkwardness obviously meant nothing in the light of his enormous successes.

The storytelling is colourful, filled with anecdotes and manages to describe the battles and crises in absorbing detail. It takes a skilled writer to create tension while describing a plot everybody knows already, but mrs Longford pulls it off in her book with the same success as for example Jonathan Parshell in "Shattered Sword", his book about Midway.

The book ends with the Hundred Days and the Waterloo Campaign, after which Wellington terminated his military career and entered politics. But that, as has been said elsewhere, is a different story for a different book.

While I am not particularly interested in the Napoleonic period I was still curious for Wellington, having read more about the man who lost the battle of Waterloo than about the man who won it. This has now been thoroughly and pleasantly corrected. A recommendable book!

Incidentally Elizabeth Longford was connected to Wellington by more than interest alone, since she was actually married to one of the Pakenhams, descendant of Lady Wellington, nee Pakenham. Wikipedia has some more things to tell about her.