The Bridge at Kronstadt

A few years ago I bought Tabletop Teasers Vol 1 (no Vol 2 has surfaced so far, alas!) by Charles Grant. I have wanted to play one of the scenarios for some time and now we played The Bridge at Kronstadt. Originally placed in 1805 I moved it backwards to the mid-18th century in a fictional war between the Grand Duchy of Twitterlingen and the double princedom of Doppelstein-Hupsenbach. We used Black Powder as a ruleset.

In the scenario Twitterlingen defends the bridge across the unfordable river near the town of Kronstadt. The player will have to defend the bridge against a superior force while undermining the bridge. This will take a certain amount of time (not known to his opponent) and then he will have the emergency option of blowing up the bridge (and hopefully) destroy it. 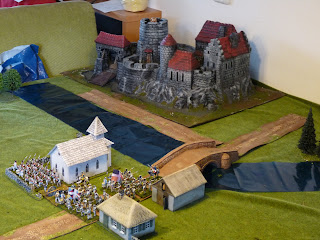 Here the town of Kronstadt lays serenely near the river. The old bridge spans the stream towards the village of Nieder Kronstadt. 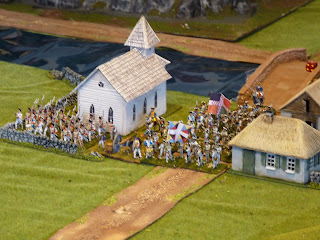 Nieder Kronstadt is defended by the Twitterlinger Grenadiere (if these look familiar; yes, I painted these as French for the American Revolution) supported by artillery. 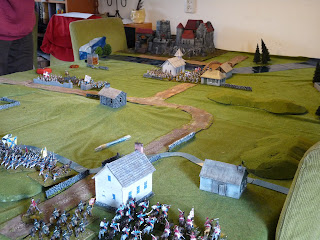 From across the plain the large Doppelstein-Hupsenbacher army approaches the Ribbeling stream. Scouting hussars have identified several defensive positions but who knows what else is hidden behind the hills? But time is of the essence, since the dastardly Twitterlingers will undoubtedly labour to undermine the bridge. So forward! 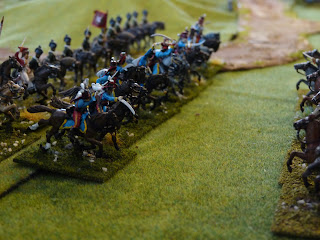 On the left and center massive columns march toward Kronstadt, while on the right the cavalry division made a wide sweep to turn the Twitterling flank. Having foreseen this, the Twitterlinger general had placed his cavalry and two regimants of foot behind a hill on his left flank. Here the Doppelsteiner Hussars charge the Twitterlinger Dragoons, only to be driven off with bloody losses. The subsequent charge of the Hupsenbacher Dragoon regiments swept away first the Twitterlinger cavalry, then their infantry. Already their left flank was crushed! 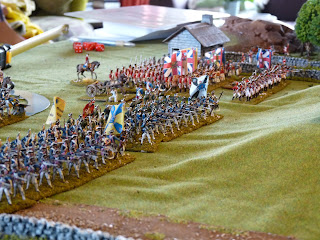 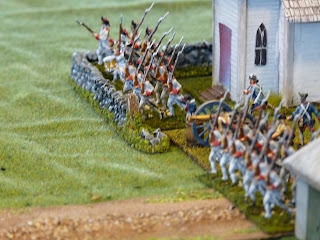 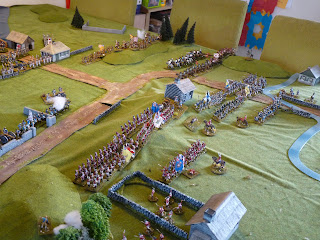 Here the battle is starting left and center. Twitterling guns tear into the Doppelsteiner ranks. 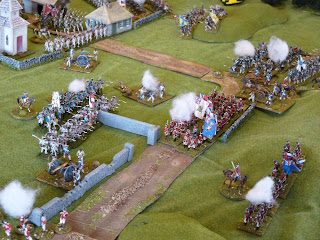 While slowly driven back, the Twitterlinger right wing causes terrible losses amongst the Doppelsteiner troops. Stubbornly they hold on to their positions. Hupsenbach infantry meanwhile passes them by to attack Nieder Kronstadt itself. Time is pressing! 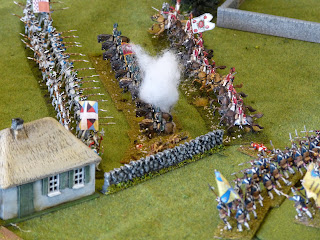 In order to force the matter, Doppelstein-Hupsenbacher cavalry charges the depleted Twitterlinger left wing which tenaciously hangs on the the village. The charge has disastrous results: both cavalry regiments are utterly blown away with deadly musketry! The charge in the center meets the same fate, losing greatly. Then the dreadful insight arrives. The unthinkable has happened! The Doppelstein-Hupsenbacher army is broken! While the Twitterlinger army has little more fight left in them, they at least have held on to the bridge. Victory for Twitterlingen!

A great game with a great ruleset. Thanks to Folkert for a pleasant afternoon and an enjoyable defeat :o)
Geplaatst door Pijlie op 8:10 PM 1 comment: