The Art Of Demo: Get everyone a wargame! 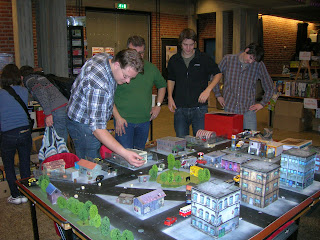 As long as I can remember I have been messing around with miniature soldiers. My chaotic battles between Airfix’ Afrika korps and the Foreign Legion (supported by Airfix’ Ancient Britons) have made way for the (slightly) more structured wargames hobby and the toy soldiers are nowadays called “military miniatures”. I find an enormous amount of fun in this hobby: playing the games, building terrain, painting figures, researching the periods and writing scenarios. And I’d like to share that fun with other people, whether they have ever heard from the hobby or not!

Now the wargames hobby is not an easy one to get into. Having to make a choice from hundreds of historical periods, a few hundred rulesets and dozens of miniature brands can be a mind-boggling experience and you quickly start to wonder: how can I ever pay for this, where do I stash all and how can I get it all inside my head? There appears to be a staggering amount of time and money involved. 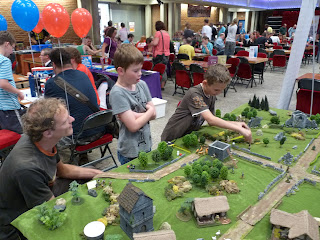 For this reason wargamers tend to limit themselves. For example to playing ”historical only”, playing just one ruleset or even by making the ultimate choice for one period -one ruleset-one brand of figures like Warhammer 40K. Of course this has to be your cup of tea in order to like it and as it turns out specializing demands lots of work and investment as well. If only because most wargamers tend to want their games to look as impressive as possible. Not necessarily to be shared, but definitely to be admired from a distance. Seeing them at work in a demo game at a convention can be an intimidating experience; No Touching, Eyes Only and please Do Not Disturb The Game! How can one ever hope to get into that?


My ambition was the opposite: getting people to experience the game in an active way. So a few years ago I started what has gradually become the Pijlie’s Game formula: staging participation games at the quarterly Ducosim convention in Amersfoort NL. You can watch but you can PLAY as well! Ducosim happens to feature a most interesting and diverse audience: card players, , boardgamers, RPG-ers, LARPers, wargamers and entire families on a day-out walking around and mingling. Curious people looking for something new and happy to get into a game as long as it looks inviting enough. Having done this for a few years now, I daresay I am getting the hang of it. What is needed for an enjoyable participation game? 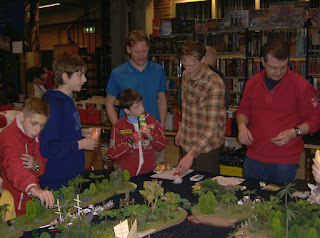 The table has to look good, but not TOO good. A few nice looking tricks with some household junk and paper craft models often has more of an effect than a modeling tour de force no one can hope to emulate. The players need to be able to relate to what they see on the table. I use a lot of scratch built terrain, free paper craft models downloaded from the internet with lots of color and eye catchers. Passers-by, your players-to-be, must be immediately drawn to your table by the spaceship, skyscraper of whatever you have standing on your table as a centerpiece. I found out that good looking figures can draw an audience, but you shouldn’t have too many of them. Everybody likes a few dozen zombies and some rednecks with shotguns but three hundred British redcoats apparently not only scare away the American Rebels, but the audience as well …


Your choice of figures is important as well. The established metal figures usually look great, but are also expensive and usually only available through the internet. I often use plastic 1/72  or 28mm figures which are relatively cheap and more easily obtained than their metal brethren. They are often sold in hobby stores or even at the convention itself and the lower costs and smaller quantities will make it all look more easier to recreate for the players themselves.


I combine lots of plastic kits and toys, like cars, in scales more or less fitting the figures used in the games. All this makes it easier for the players to identify with the stuff they are playing with: they're toys, after all! And it is amazing to find out that a well-painted 50 cent plastic dinosaur looks just as well as his 35 euro counterpart. And you'll find he first in every toy store!


When you're an odd duck at conventions (and I am always placed halfway between hardcore wargames and boardgames) an inviting attitude is of paramount importance. I always try and answer as many questions as possible and always try to respond to anyone showing an interest, even if people don't “want to bother me” with questions. Just to be clear": no one ever "bothers" me with a question since any question is more than welcome!


The most popular rulesets are often the most expensive, but dumbed-down versions of classic sets like The Sword & The Flame or G.A.S.L.I.G.H.T. result in perfect rulesets for participation games. Bulky rulebooks are good to leaf through and marvel at the pretty pictures but should otherwise be avoided at all costs. A 10-minute explanation should be enough to enable completely unprepared players of 6 to 60 years of age to start immediately. Leave all decision making with the players, but make it as easy as possible to take action. Let the players dice for themselves but tell them whatever their roll has to be. Invent it if necessary as not to slow down the game. Keep the length of the game down to an hour or so, so people know they will have the chance to play something else later on and let them walk out of they don't like it, or step in halfway if they do. Play several short games in a day so enthusiasts can return for a second game.


The most important part is to tell a Story. The game should not only be thrilling to play, but players should be able to relate to the game and step in their figures' shoes. A juicy approach of events works a lot better than a dry list of facts. When a player has to "die", let it at least be glorious! It doesn't matter who wins, as long as nobody feels he loses.


Why do I do all this? Well, for responses like this one: Last year a spectator of one of my games asked me where she could buy the ruleset I used. SInce the ruleset was a free download from the internet I was glad to give her the URL. To my question what she was going to do with it she answered: "We are going to play it on my son's birthday. I'll buy a bag of plastic dinos and we'll build the rest from LEGO. He has got plenty of that!"


What more can you want?