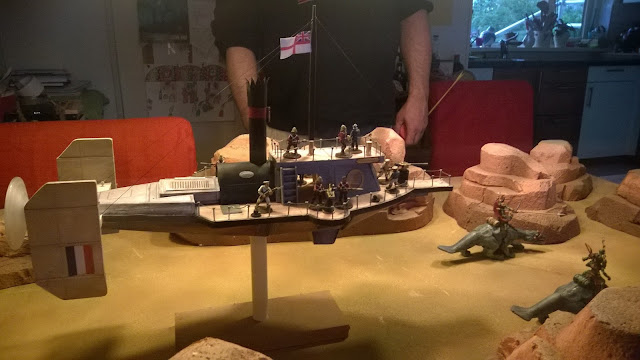 The British Empire stretches her greedy fingers to the Martian kingdoms and their riches. Only recently arrived on Mars, they establish a bridgehe d and decide on a reconnaissance-in-force on Helium territory. The British gunboat HMS Ladybug will sneak into Helium and gather intelligence.
She enters helium at low altitude, maneuvering through –and shielded from curious eyes by- the hills guided by a trio of Green Tharks on Thoats.

The table is a narrow valley, flanked by rocky hills. HMS Ladybug glides along just below the hills’ crest. She is heavily armed for her size with a heavy 2lb gun, two medium Hotchkiss quick-firing guns and two Nordenfeld machineguns. A captain and three crewmen (helmsman, stoker and bosun) serve as crew, a lieutenant and 6 soldiers man the guns and serve as Marines. The three Tharks ride in front of the ship, having refused to board such a hellish contraption. Tharks Do No Fly!

The Heliumites lie in ambush in the hills left and/or right from the Ladybug’s path. They have three light skiffs. Each one may carry three troopers and a bomb. They start in the sky and from the table edge and are assumed to be able to clear the hills with one action, leaving two for movement in their first turn. The Heliumites number 18, including a Jeddak, a Jed and 4 veteran troopers. All are armed with rifles, pistols and swords.

How it played for us:
The helmsman of HMS Ladybug taken out, she was momentarily out of control ans the skiffs sprung their trap, all from one side. The Hotchkiss guns proved deadly, taking out all the skiffs despite the fact the Ladybug herself became grounded during the battle. Boarding Red warriors were dispatched by the Marines and the Tharks did some slaughtering of their own in the hills. So after a tense hour, Ladybug's crew watched the Reds withdrawing. 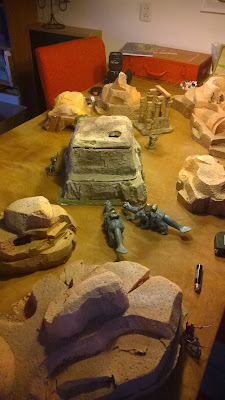 A Barsoomian Red Princess’ yacht has been shot down by wild Green Tharks, her companions slaughtered and she herself captured. The Tharks have secured her in a hidden temple and are demanding huge ransom. Secretly, she has activated her locator enabling her compatriots to find her.
A small party of 12, armed with rifles, swords and pistols and including a Jeddak and a Jed have located the temple and will attempt to free her.

The temple is situated in the middle of the table. Two Thark guards patrol on the outside. Four Tharks including a Jeddak skulk inside. After the Tharks are deployed, the Reds start hidden in ambush in the terrain all around the temple and may be positioned at will. 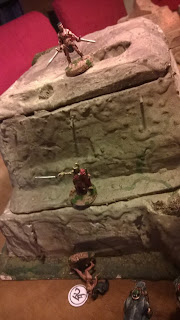 The Thark guard start outside each others line of sight and move randomly on a scatter die+D6” each turn. They will spot any Red within line-of-sight in their forward 180 degree arc. The Reds have Initiative in every turn until they are discovered and may choose to move before or after a Thark guard moves.  As soon as shots are fired or a Thark guard spots a Red warrior, the alarm is sounded and the Tharks inside are alerted.

Misson objective:
Reds: save the princess and escort her from the table alive.
Tharks: prevent this by any means necessary.

How it played for us:
On both attempts the Jeddak managed to enter the temple and reach the princess. The first time is companion fell and alerted the Tharks. The Thark leader stormed into the cell and killed both the Red Jeddak and the princess. The second time was even more tragic. The princess escaped through the roof, only to fall to her death outside when failing both here climb rolls......

The spy that came in from the dawn 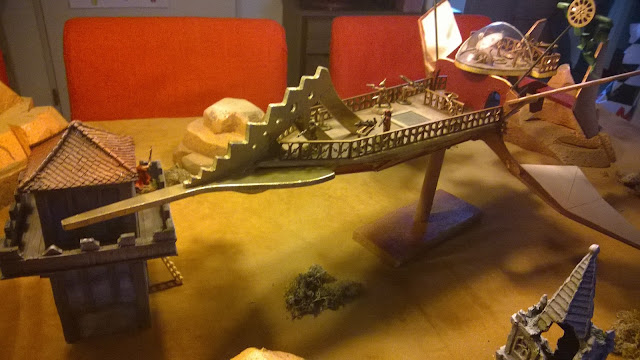 A Zodangan spy has obtained some valuable information from Helium and has arranged a rendez-vous with a Zodangan warship to transfer this info to her masters.

Heliumite security has caught the warship entering Heliumite territory and follows her in the hope of catching the spy. Having spotted the ship near an abandoned watch tower they decide to lie in ambush and wait for the spy to emerge.

Zodanga: The ship is hovering at low altitude and awaits the spy. It is a lightly armed ship with a crew of 12.
Half the crew is below decks. The rest mans the deck and bridge. The ship will need a manned bridge and a full turn to come into action and plot moves.

The spy arrives riding a Thoat and suddenly emerges from the dark of dawn, two Moves away from the tower. She moves toward the tower, dismounts and climbs toward the ship to hand over her secrets. That is, if nobody intervenes.

Zodangan troops: 1 Jed, 2 veterans and 9 ordinary troopers, armed with swords, rifles and pistols. The spy is a Jeddak and armed with sword, rifle and pistol. The ship, the Last Shadow is armed with four medium pulse cannons. These are loaded from the start of the game.

Helium: the Heliumite troops have three light skiffs. Each one may carry three troopers and a bomb. They start in the sky and from the table edge and are assumed to be able to clear the hills with one action, leaving two for movement in their first turn. The Heliumites have a medium cannon hidden in the hills, ready to fire. There are 18 Heliumites: 1 Jed, 5 veterans and 12 ordinary troopers, armed with rifle, sword and pistol.

How it played for us:
The spy was shot down from ambush and the skiffs attacked the Zodangan ship. However, its guns proved deadly for them and all were shot down. The Red ground troops failed to reach the spy before Last Shadow activated and moved for perfect shooting positions, negating their cover. The Reds withdrew...
Geplaatst door Pijlie op 8:32 AM 4 comments: