This week I received my pre-ordered copy of Black Powder: Rebellion! It has been a long wait but it was worth it! Ever since Black Powder came out I have used it to play the American Revolution. At the time no one was very enthusiastic about the period so I decided to collect and paint all sides myself and do it in nostalgic 20mm plastic. So now I have over 800 20mm figures and the rest of the world has in the meantime started collecting 28mm Perry and Warlord.... But that is another story; on with the review! 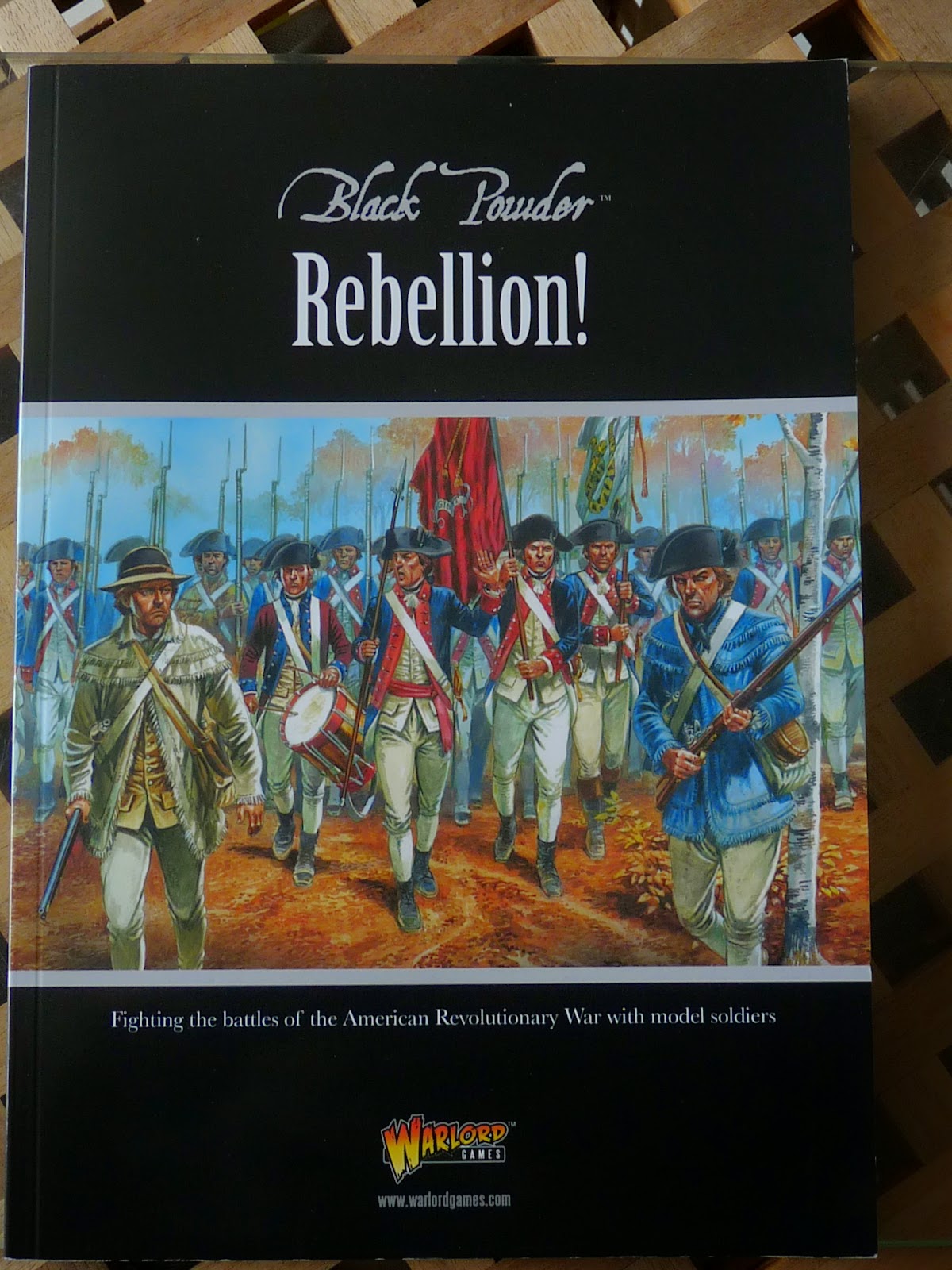 "Rebellion!" is a supplement for the Black Powder wargaming rules, aimed at playing the American War of Independence or American Revolutionary War, depending on which side of the pond you're from . It is a book like we have come to expect from Warlord Games: a hefty 149-page full colour softcover folio filled with (excusez le mot) "wargames porn". Every page spread shows illustrations and lovely photographs of someone's expertly painted (yes...28mm) collection. The editor of this book is apparently a follower of the "blurred bases" philosophy as almost all bases have been photoshopped away, but that is about the only gripe I have about the illustrations. 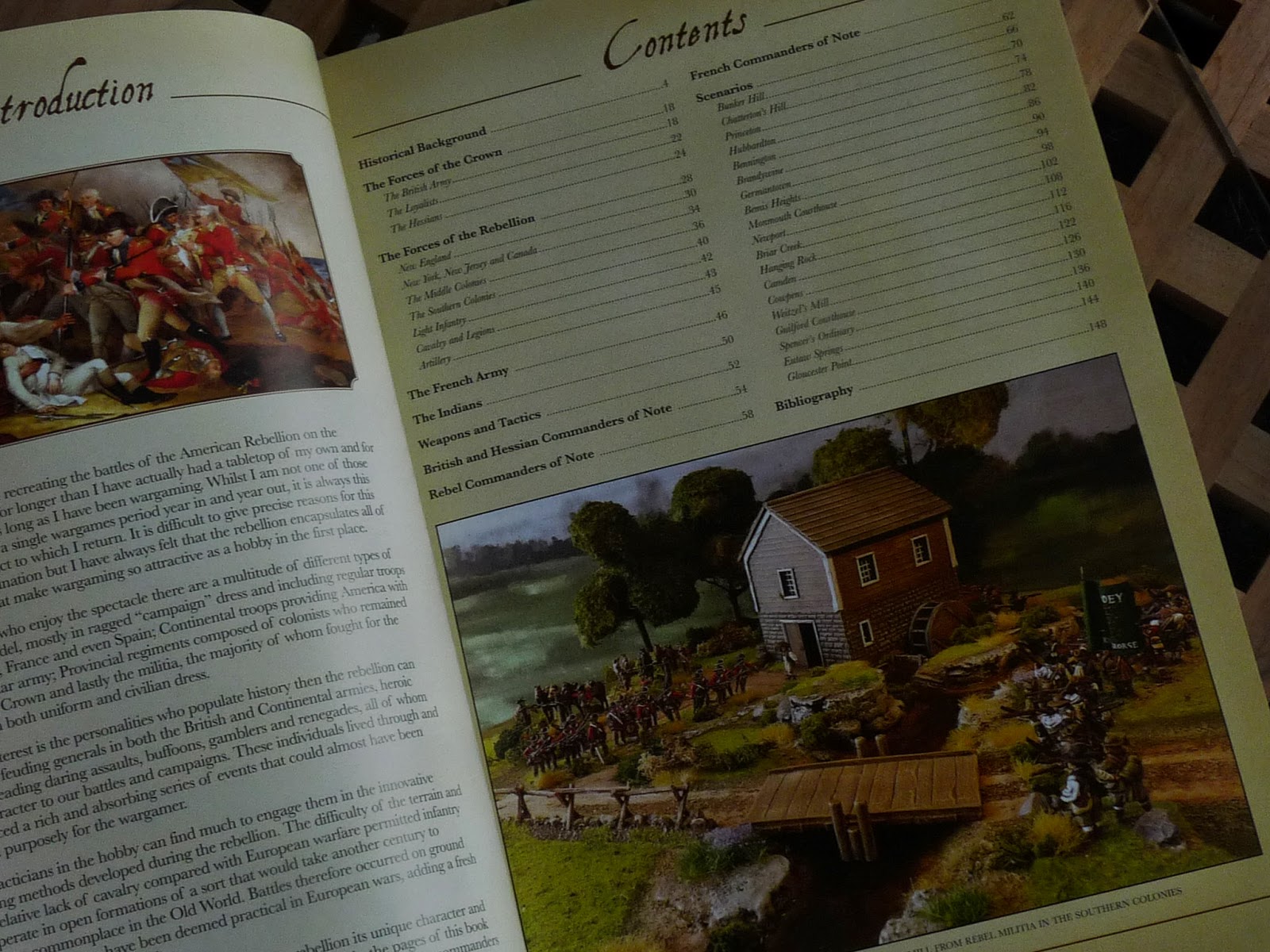 The book is meant both for players who are knowledgeable about the period and for the debutantes. It starts with a 16-page concise history of the American Revolutionary War. As one would suspect reading the title, the British authors have foregone the term War of Independence. While 16 pages cannot possibly deal with all the intricacies of this complicated conflict the book does succeed in presenting a consistent and comprehensive summary. If you know nothing about the American Revolution and want to learn the wider scope of the military side of it, you could do worse than reading this.

The book then describes in detail the British, Loyalist, German, Continental (American) and French armies. Lists of all participating regiments are given and the organisation is explained, which is no sinecure when it comes to the Continental troops as their organisation varied with the colonies from where the troops originated as well as in time, as Congress adopted different rulings on drafting and recruiting as the war progressed. The lists mention uniform colours, periods of service and the battles the units took part in. Very useful for writing scenarios!

Then weapons and tactics are briefly discussed, followed by portraits of the famous (or notorious) commanders of the conflict. Dashing Tarleton, treacherous Arnold and pompous Gates are all there, together with their opponents and compatriots.

Then, on page 62, the book arrives at its true treasure: the scenarios!

As you may or may not know, Black Powder is a generic ruleset aimed at playing the battles of a 200-year period starting around 1700 AD. With such a scope, the characteristics of any specific conflict are not likely to emerge and the rules risk being a rather bland mix of everything. The designers have cleverly countered that by designing a few dozen Special Rules which you can add to units. This way, for example, American Frontiersmen with rifled muskets may be Sharpshooters that reroll misses, making them deadlier shots than their smoothbore musket-armed opponents. One can even vary this Special Rules depending on the scenario. Regiments that are Unreliable in early battles, gain experience and exchange this Special Rule in time for Steady, as they become drilled veterans.

The authors describe all Special Rules in relation to their vision on the Revolution. Some, like Heavy Cavalry and Form Square, are permanently discarded . For the rest it is described what their function can be and how they can be used to influence the specific scenario, when one wants to get a particular balance between the opposing forces. While you may not agree with the authors' ideas, it does give a particular Revolutionary flavour to the rules. 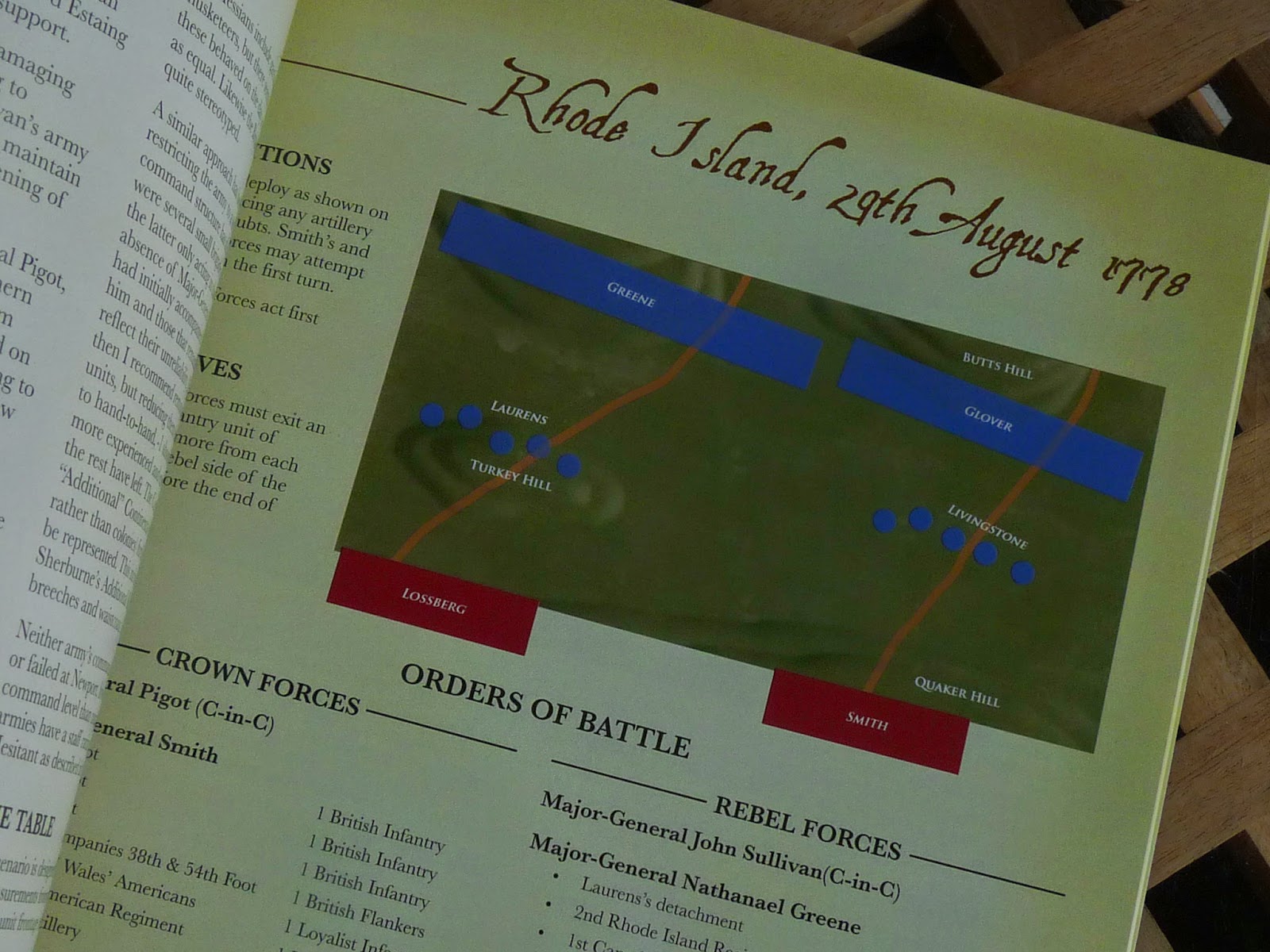 The book then gives you a whopping 19 scenarios ranging from the massive battles of Monmouth and Brandywine to small skirmishes like Gloucester Point, the latter deftly defeating the prejudice that you need a million figures to play Black Powder with opposing forces of 12-14 figures in strength!

Not surprisingly the book also gives valuable suggestions for playing with smaller units, as battles of the period were often fought between small groups of soldiers. Using Company stands instead of Regimental lines will enable you to play the smaller scenarios a lot sooner than you will have painted the large forces that you will need for something like Guilford Courthouse. The book ends with a recommendation for further reading on the period.

This is all that the first read of the book allows me to write as a review. As you may gather from it, my first impression is very favorable. Whether you are already invested or merely interested in the period, Black Powder Rebellion! is a fine purchase.

As I am in the luxurious position to play most scenarios with the figures I already have, now is the time to go finish my winter table and play Princeton!