The Silver Bayonet: A Wargame of Napoleonic Gothic Horror review

I never would have thought it possible that I would ever wargame Napoleonics. EVERYBODY and his dog already did that.

And then Joseph McCullough wrote The Silver Bayonet and I was done for. So I scavenged some 28mm Napoleonics leftovers from mates here and there (I already had monsters and terrain) painted them and played my first game. 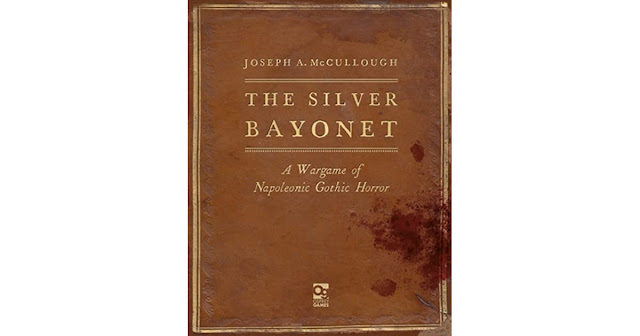 What kinda game is this anyway?
The Silver Bayonet is a skirmish wargame. Units are small, at most an officer and 7 figures, moving individually. It's setting is Gothic Horror, which means it happens somewhere between the 16th and the 19th century and is about ghosts, vampires and other classical monsters lurking in deep forests or crumbling ruins. It's Napoleonic, so very colourful. But in the dark… 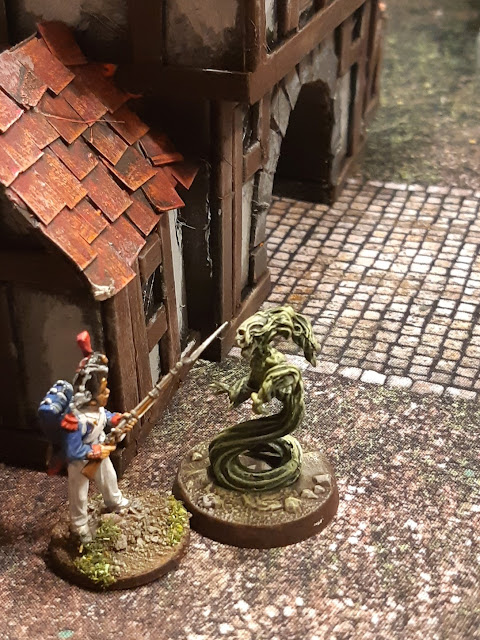 So French Chasseurs and British Britse Riflemen chasing each other and all kinds of monsters all over Europe. The many long wars attracted all kinds of supernatural vermin and every European nation which wanted to be in the Big League raised a specialist unit to combat that. So far the fluff.

Looks ain't everything
The book is a decent hardback of 160 pages. It could have been more if it had been up to me, because the font is a bit small. Then again, not everyone is over 50…

The book looks like an 18th century journal (complete with atmospheric bloodstains) and this has been extended into the book's interior with a lot of text and some black-and-white illustrations. There are no colour pictures or explanatory diagrams, although I must say I haven't missed them.

To me, the book looks a bit dull. But it does what it is supposed to do, which is laying out and explaining the rules in a clear and accessible way. The book has a clear and good index, which is a big plus for me. I advise to download some aids from the official Facebook page, like a QRS and a Bestiary which lists all the monsters and to put some bookmarks in the book. There is an Excel unit builder in the Files section as well. This will help you find things without leafing through the book too much.

Besides the rules the book includes 10 scenario’s, 4 solo scenario’s (as well as solo rules, obviously) a Campaign system and tips to write your own scenario's. Very handy. And of course lists for troops to include in your unit and a list for monsters. 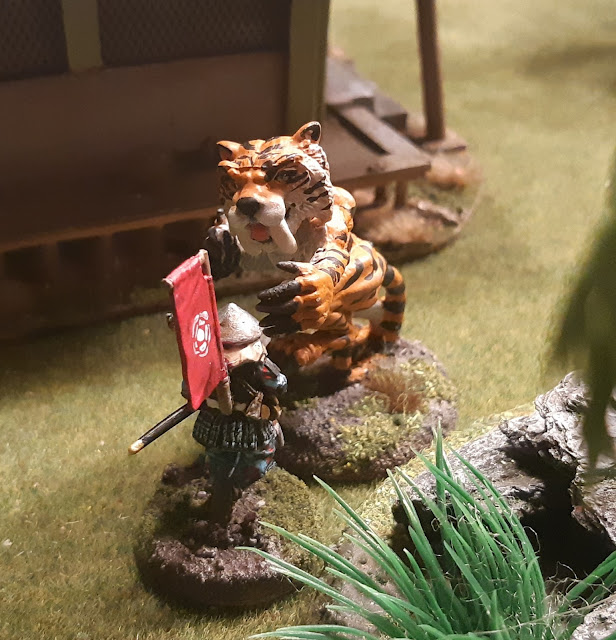 A scenario is usually won by driving off your opponent and/or investigating clues on the table, killing monsters as you go along. Or running for your life from them....

The clues are revealed with the help of playing cards. Simple numbered counters would have worked equally well, but wouldn't have that 18th century feel, would they?
Scenarios are won on points, gained by killing opponent's, investigating clues and killing monsters.

Rules and novelties
One or more players each command a unit to battle an enemy unit and/or monsters. The monsters are controlled by the game and react "programmed". Like automatons. They appear on double Initiative rolls in our games. Officially only on a double 1, but we thought the more the better and used any double. So far we haven't rolled any double 1's for Initiative btw, so the official rulings leave you largely devoid of monsters. And that can't be right. Double 20's for Initiative trigger Special Events. 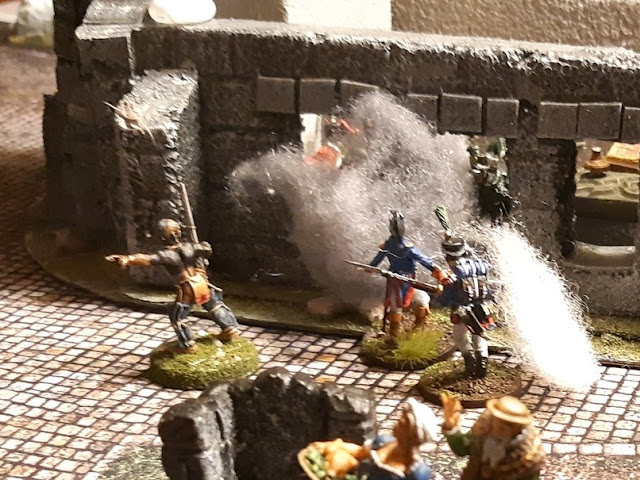 Mr McCullough replaced his usual D20s by D10s, which leads to less random results, which is also good.

Activated figures roll for Tests so succeed in things like hitting someone with a musket or melee weapon. They always roll two dice; a blue Skill Die and a red Power Die plus a Skill value. The added total is the result and in case of a hit the Power Die determines damage. Elegantly simple.

I struggle with the Fate Pool, however. At the start of the game you get 2 blue Skill Dice, 2 red Power dice and 1 black Monster die. You can use each to pick an option and then discard them. For example you reroll a Skill, Power or Monster roll result or cancel all damage from an attack. Using these options wisely can make a lot of difference in the game.

But. Instead of having piles of coloured dice lying around a simple check list works just as well. I thought using all kinds of specifically coloured dice a hassle and used a check list.

Another, so far underused by us but interesting item is the reaction to being attacked. If the target figure survives the attack, it can either respond in kind by shooting or meleeing back or can duck back into cover. This simple reaction mechanism prevents an entire enemy unit taking pot shots at your figure until it is dead.

All in all this resulted in a very enjoyable, quick-playing and interesting game with a good mix of maneuvering, shooting, Melee and investigating clues. And battling or running from monsters. Those can really make or break your day. You might encounter a monster that you have no defence against and even if you do, they are dangerous. But they cause interesting problems and dilemmas and make the game a bigger challenge.

This is a "shooty" game. Muskets and rifles cover the larger part of the square meter table we use, even if you have to reload after each shot. However, shots are rarely instantly lethal and the duck back reaction choice should prevent your figures from getting killed too quickly. Standing your ground and engaging in musketry is usually not a wise choice...

Use your Fate Pool dice wisely (and not just to hit someone) as it can save your life later in a game and make a big difference in the outcome.

Rules as written do not produce a lot of monsters but that is easily fixed by introducing monsters on any double Initiative roll.

Although the game is intended to be Napoleonic, any musket-wielding era or setting would do. I greatly enjoy playing it in mid-19th century Japan, for example. But the pike & shot era or a pirate background would work equally well. Personally I greatly enjoy my Japanese setting.

The number of figures needed is larger than you might think. Besides a minimum of 8 figures for your unit you will need a few dozen monsters, bandits and cultists. Because any monster can turn up in any game, besides the ones requested by the scenario.