Huh? I hear you think. Here are the subtitles: a buntai apparently is a small unit of warriors in late medieval Japan and Ronin is the Osprey skirmish game I have yet to play for the first time but already have made a ridiculous amount of stuff for...

Below are my first two painted buntai: sohei (warrior monks) and bandits. Buildings at the back are a scratchbuilt shinto shrine and Tori gate and a free papercraft download. 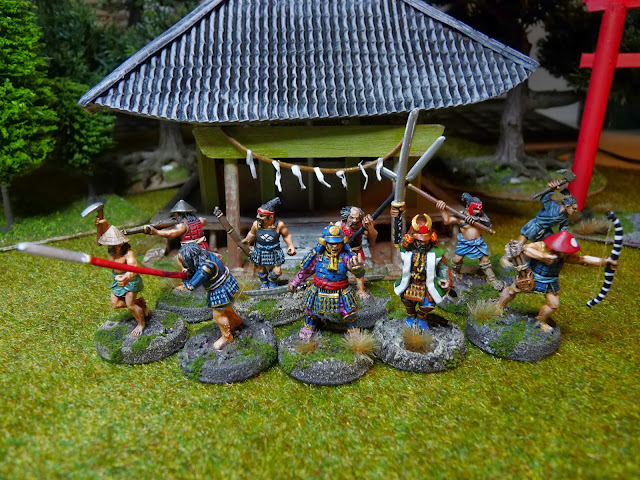 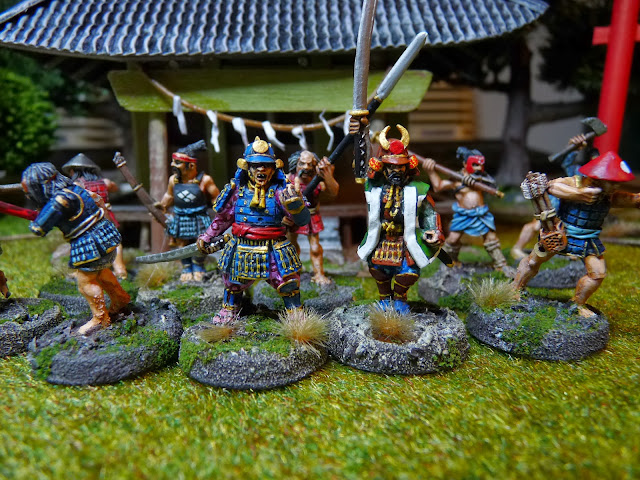 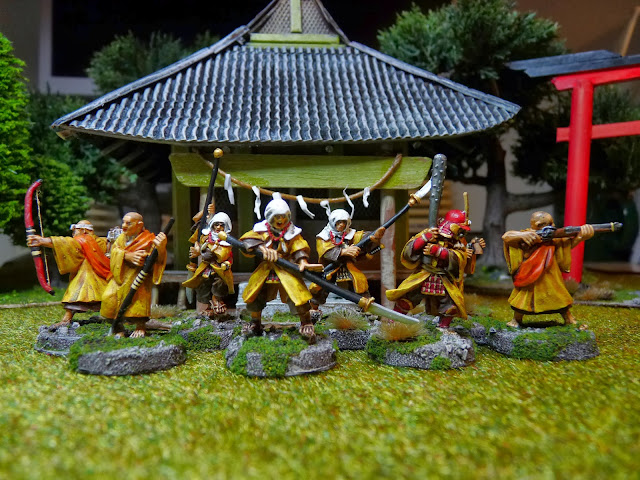 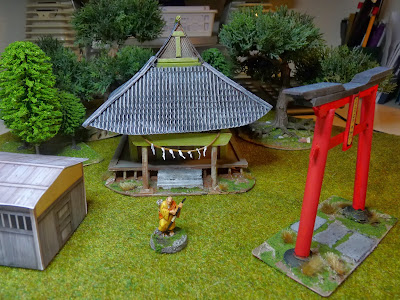 The bushi buntai (samurai and ashigaru) is next in line! Stay tuned...

Every year for the last 10 years, on the last gaming night of my local Wargames club, The Blades Of Destruction (some DBM origins are still discernible) I host a weird wargame. The components differ each year, but it is always a skirmish game with some weird bits, like UFOs, Asterix, dinosaurs or zombies. I sorted out the many pictures I have from them and it turns out I have pictures from all but one! I think after 10 years a little parade is in order, so here they are:

2003
The first one right after I had discovered the GASLIGHT ruleset started relatively sedate. Yunks filled with Chinese pirates attack an Asian coastal village defended by assorted Pulp heroes. 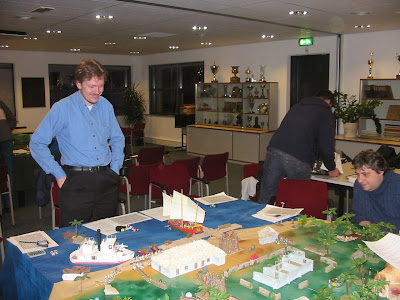 2004
Having raided the local toy store in 2004 a host of VSF characters unpacked their heavy-calibre guns and went a-Dinohunting in the Lost World. 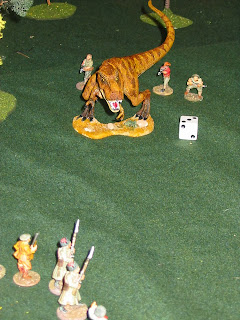 2005
Several parties tried to salvage a crashed UFO and its secrets. There were werewolves, a mammoth and a piramid and for the life of me I can't remember why. After furious gunfights in which the aliens (if I remember correctly) convincingly outgunned everyone else, Marja tried reason and talked them into cooperation (and won the game). A unique victory by the way... 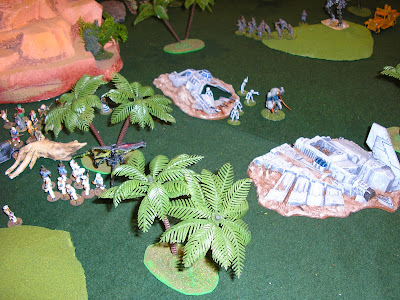 2006
The only year I lack pictures of the game. Teams of adventurers race to the rescue of Santa Claus who has been hit by a warpstorm. He and mrs Claus have been transformed in Christmas steroid mutants and all his reindeers and elves turned into zombies. The first time that a common enemy united all players who only started killing each other after the last zombie had been downed (2 seconds later, to be precise). 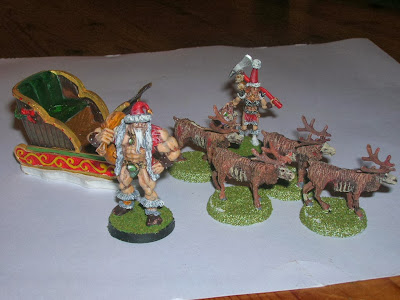 2007
Fairyland was invaded by Vikings that year. Eventually they made off with the Goose with the Golden eggs after having battled Snow White and the Seven Berseker Dwarves, Red Riding Hood and her Wolf pack, a giant, ogres and monks with Holy Hand Grenades. 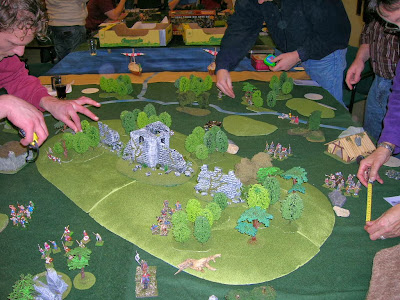 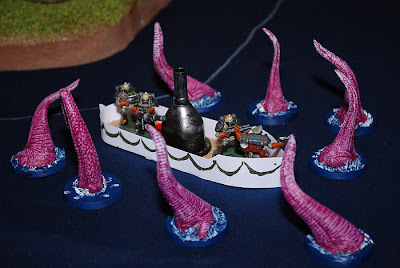 2009
Asterix and his tribesmen went to find holly for the magic potion, collecting boars and Roman helmets on the way. 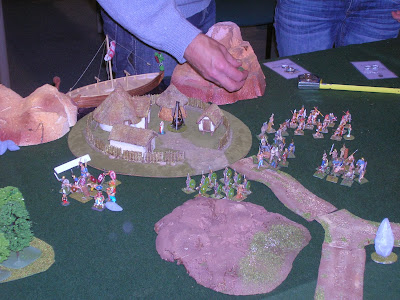 2010
Innsmouth was raided by several armed forces in order to stop The Great Old One and capture the Golden Idol. 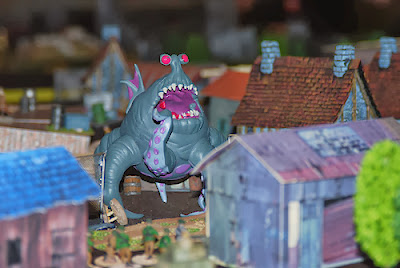 2011
Players competed to complete their missions in a zombie-infested city. Conflicting missions aided the zombies in creating a hilarious bloodbath. Eventually someone saved the schoolkids I think.... 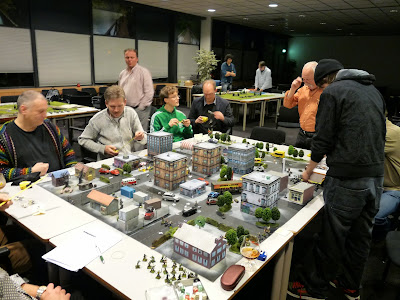 2012
Asterix once more stormed into the breach, this time to help his tirbesman the bard who went to follow the Love Of His Life into the Underworld (read too much Greek stuff....) and eventually confronted The Lord Below (see below) himself. 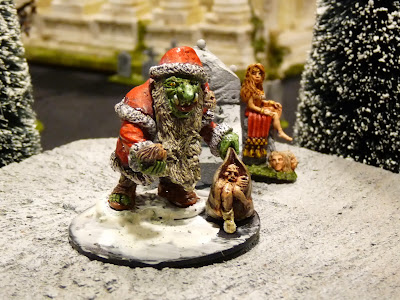 2013
This year players directed teams in more conflicting missions in an Alien and MiB infested countryside. It came from beyond the still indeed.... 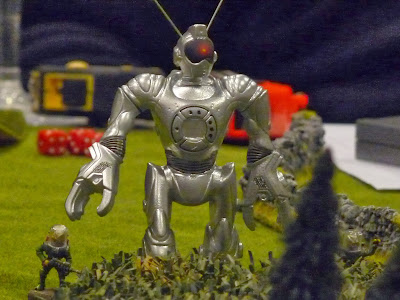 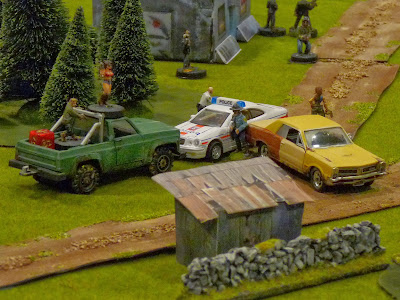 I don't know if and how long this traddition will persist, but these 10 years are good to look back upon!
Geplaatst door Pijlie op 11:06 AM 2 comments: