Last week we played a massive battle with the Dystopian Wars rules. We decided to mix it up with the classic demo game Bog-A-Ten. If you have never heard of it, click on the link for this magnificent little demo.

We managed to fit 5 players in a day long hunt for the golden Secret of Atlantis, hidden in the Atlantean temple on the center island. Players were tasked with finding clues on the island, using their land troops to battle hostile forts, dinosaurs and erupting volcanoes. All ships were issued the ability to carry tanks and to land their Assault Points as Marines on the islands. 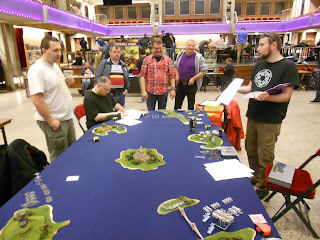 Here you see the table at the start of the game, still very neat..... 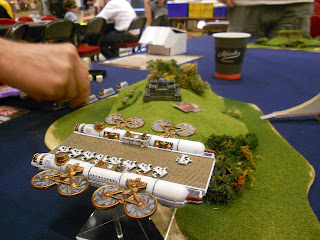 Japanese flyer firing at the fortification on the island in the background. 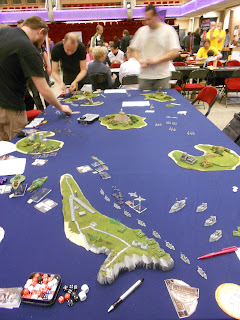 Another overview of the table from the opposite side. Note the KoB fleet landing tanks on the island in the foreground. 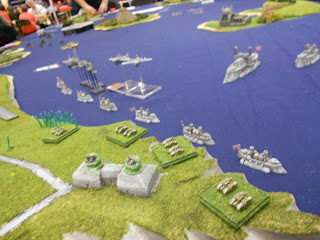 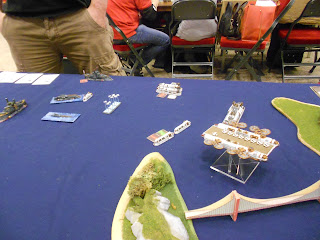 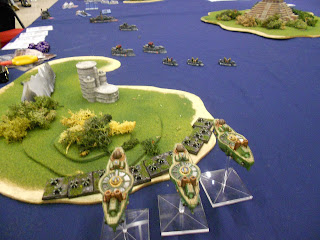 Covenant flyers landing walkers on an island, looking for clues to enter the Temple at a later stage. 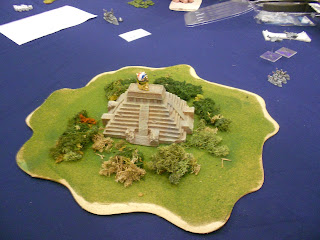 The central island with the Atlantean Temple, still peaceful at this point... 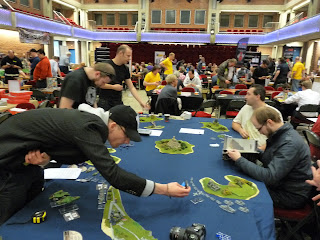 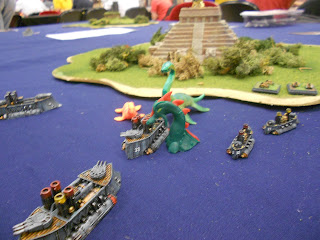 Sea monsters attacking Brittannian cruiser. Weren´t these an extinct species you ask? Well, after this fight they were.... 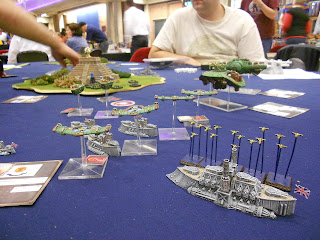 Various fleets converging on the island in a last bid for the Endgame. 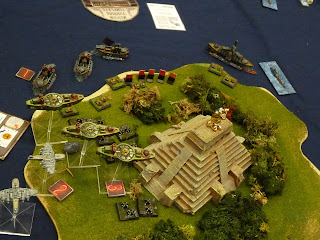 The chaotic battle at the end. Note the tanks and walkers from various factions slugging it out. The cardboard counters are infantry (AP) landing on the island as marines. 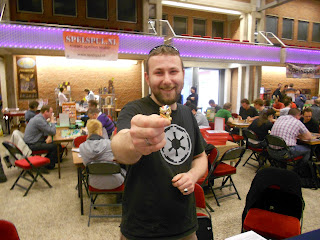 And the Winner! Officially he had to exit the table as well, but it was almost five o´clock and the convention was closing, so we decided that first grabs determined the winner.

As this game was a testrun for the Great Garden Battle for this summer, I can look forward to another run in a few months. The rules worked quite well, only requiring some tuning down of hostile cities and monsters.

A very enjoyable day by all accounts!
Geplaatst door Pijlie op 11:43 AM 5 comments:

As I wrote earlier I am planning to expand my 18th century cavalry options. For this I need more hussars and dragoons, but especially the powerhouse of all 18th century shocktroops: the cuirassiers.

Of course no cuirassiers are made in 1/72 plastic and even metals are rare. I found the Outland games ones but so far have failed to acquire any. So I turned to conversions. 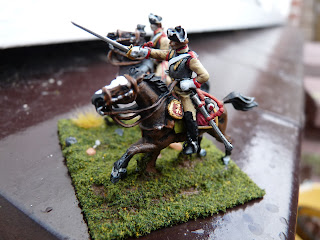 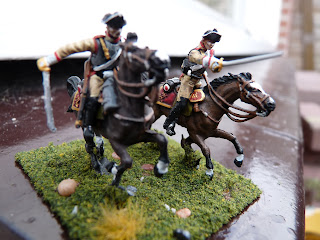 I started with Zvezda and HaT Napoleonic Russian Cuirassiers, removed their heads and replaced them with heads from the Imex AWI British infantry. The horse harness seemed appropriate enough and so a further paintjob led to the results below. The one with the raised sword is Zvezda, the other one HaT. After the headswap and the paintjob they look remarkably similar and I am quite pleased with them. Another 22 to go to finish the two Cuirassier units I have planned.

Hussars and dragoons are to follow. These are both made by Zvezda for the Seven Years War and the Great Northern War. Wait and see!
Geplaatst door Pijlie op 8:58 PM 10 comments: