Millin' around in 10mm Pike & Shotte

I always say there's no real Pike & Shotte wargame without a windmill stuck somewhere in a corner of the table. Dunno why, maybe it's because I'm Dutch, but in battles with pikes, big boots and wide-brimmed feathered hats there should be a windmill in the background. And I did not have one yet, so I decided to make one.
The sails gave me the most food for thought. 10mm is a small scale and I really liked the squared structure of the sails to be there, as they are so iconic for a windmill. But how to make such a fine structure that would still be able to hold up against the rigors of gaming?
Then I came upon the solution of a strip of flyscreen stuck to a narrow strip of plasticard (below) which turned out to be perfect! 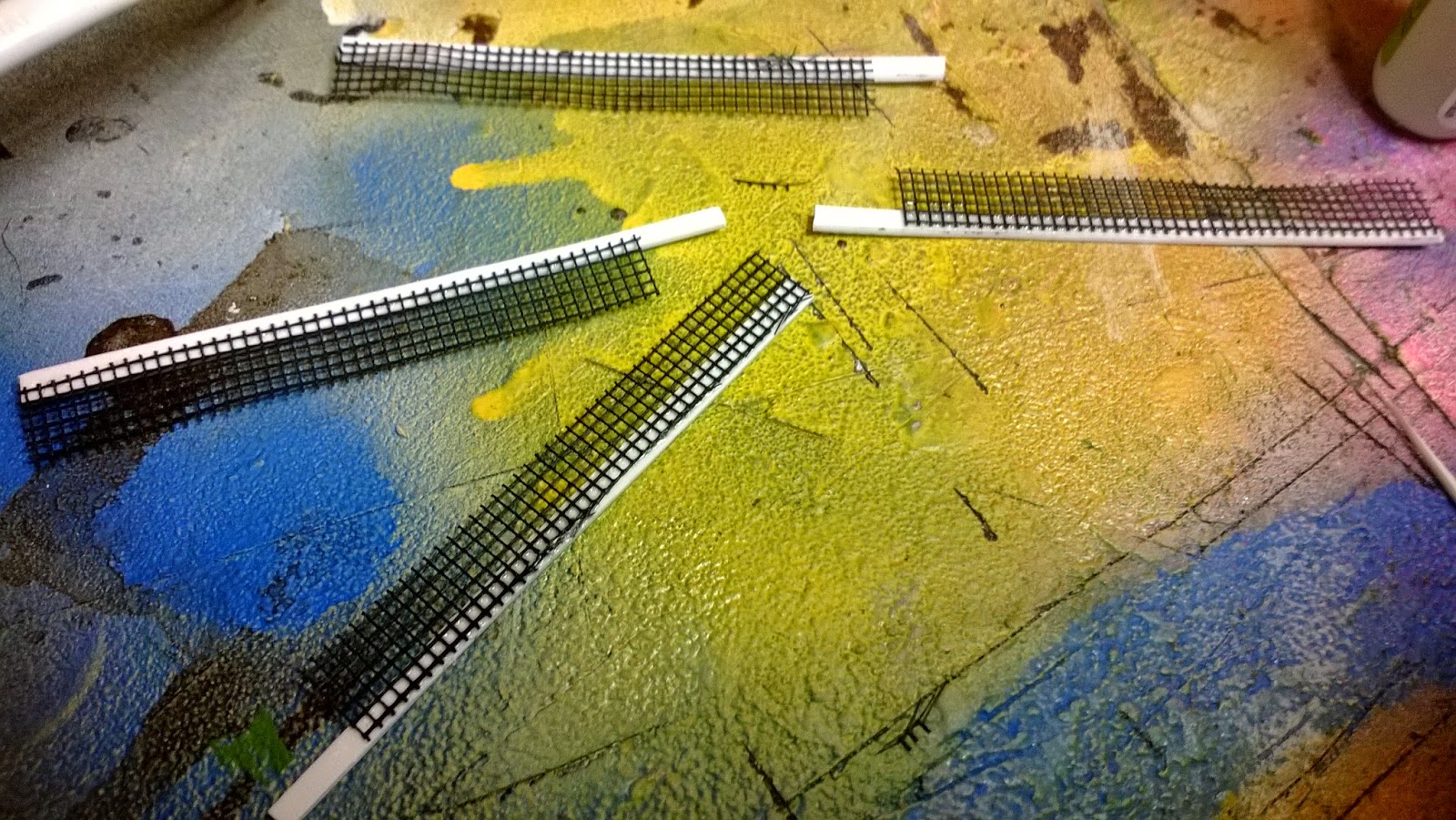 I decided to make the base and body of the mill from foamboard, which is easy, light and strong. 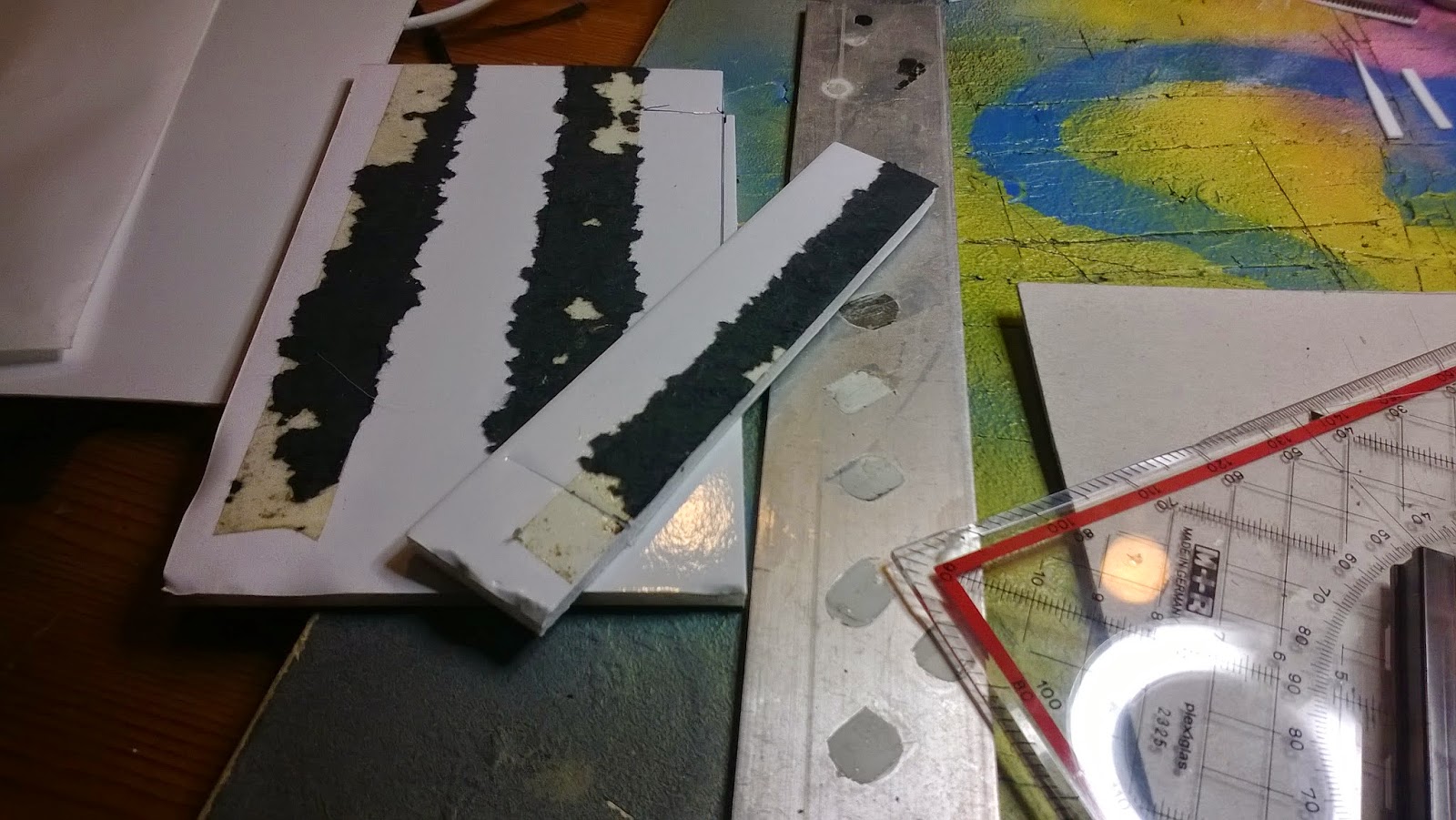 The top of the structure is a simple house-shaped box. Details would be added later through timbering. The roof was made from simple cardboard from the backing of a notepad. 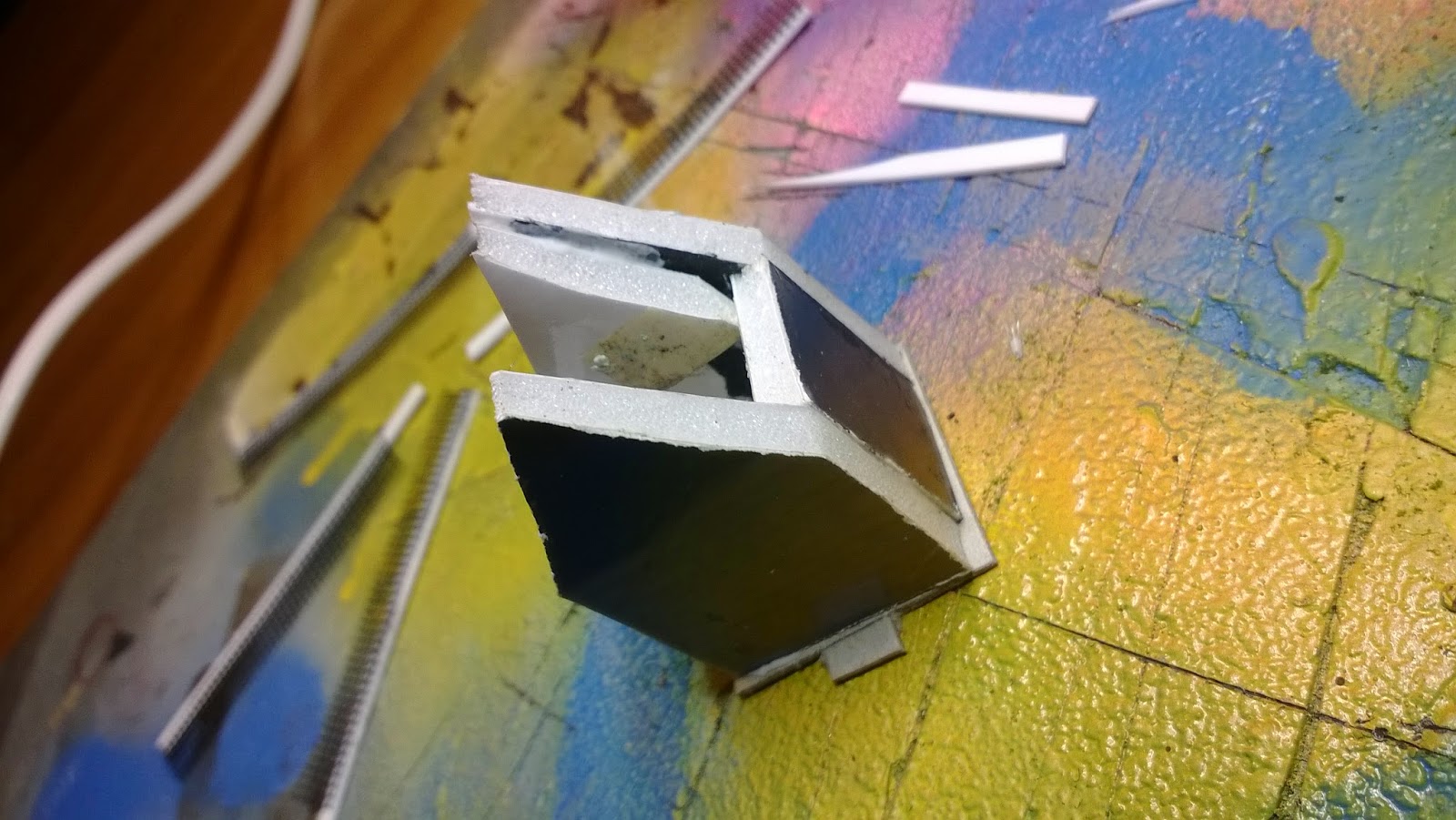 The base is a square-footed pyramid. Slivers of wood (cut from coffee stirrers and such) were glued to the base to resemble timbering. The base was glued upon an old credit card. 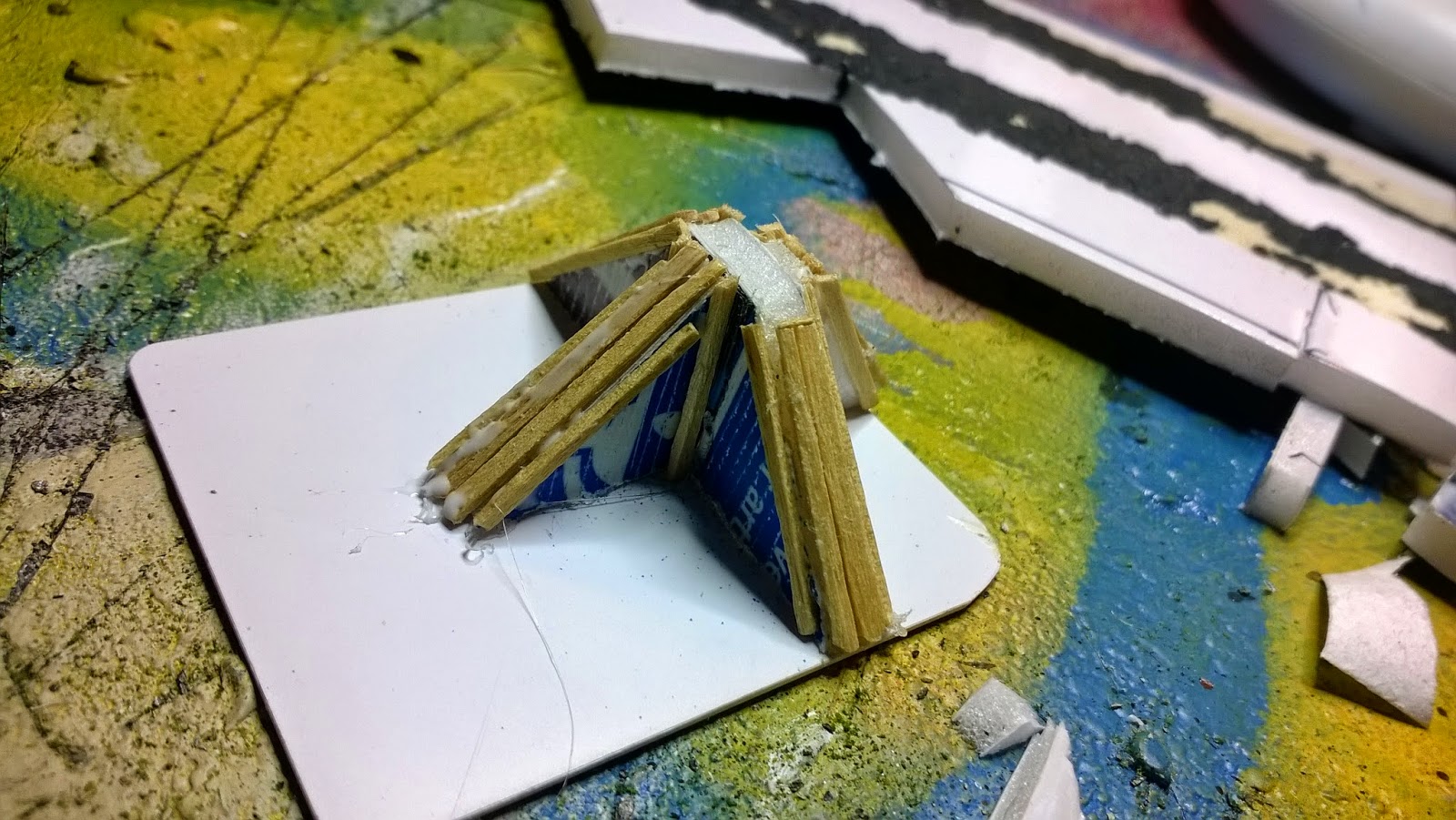 The upper structure is mainly timber. Slivers of cut coffee stirrer were glued to the foamboard box.... 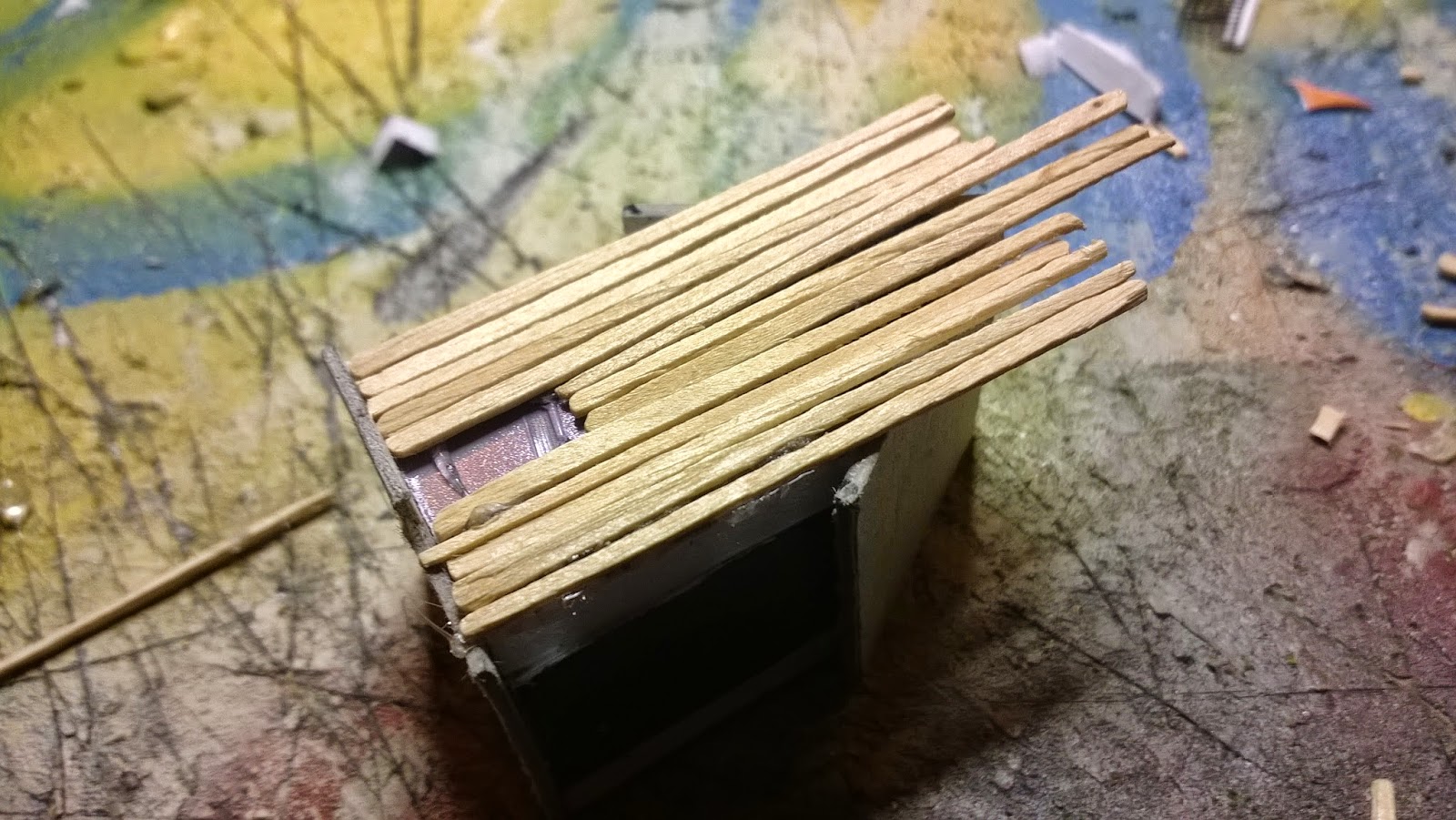 ...and cut to shape with clippers. 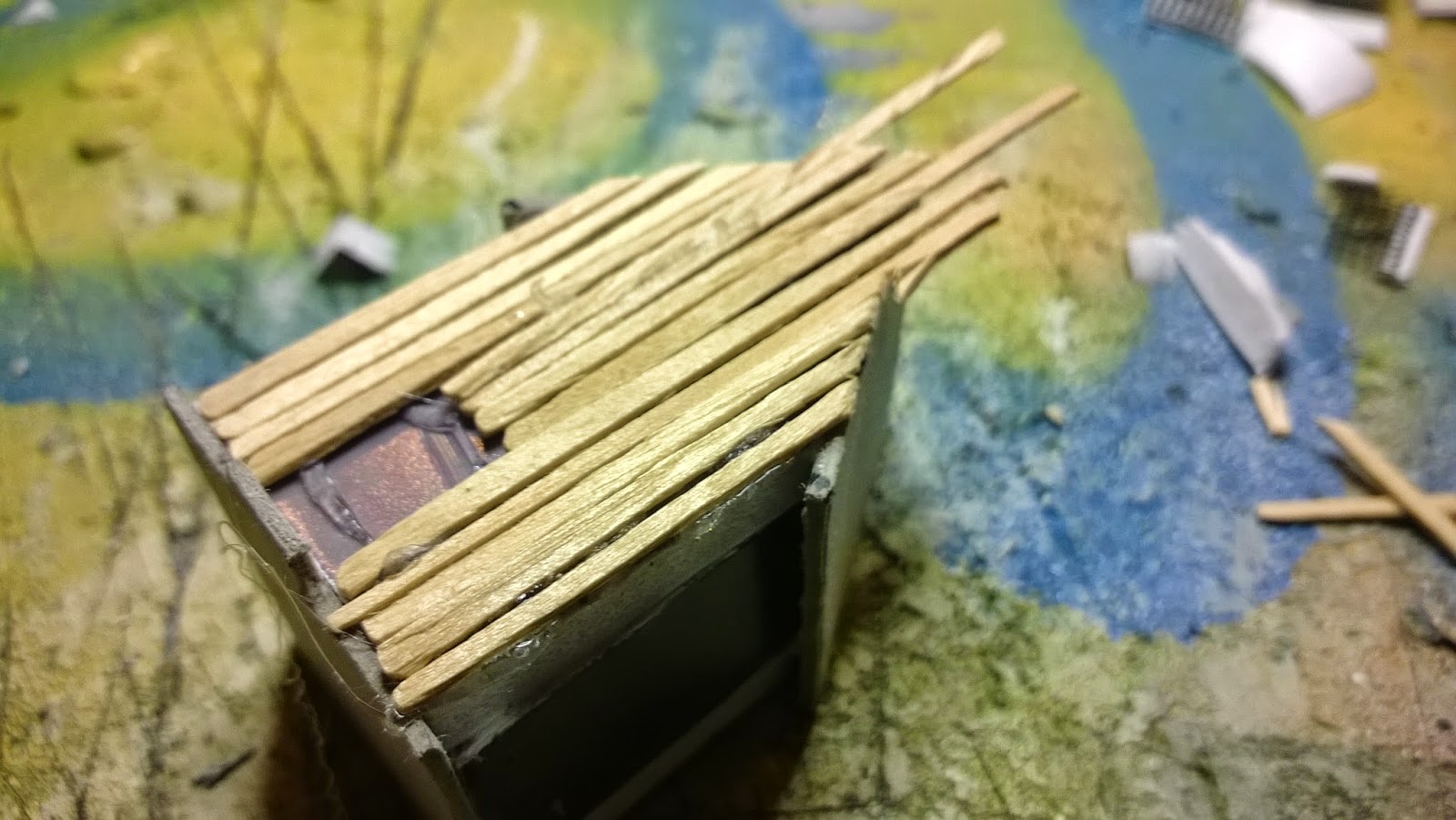 I decided on a thatched roof made from a cheap towel (see below) glued on top of the cardboard roof and then the upper structure was glued (using a hot glue gun) to the base. 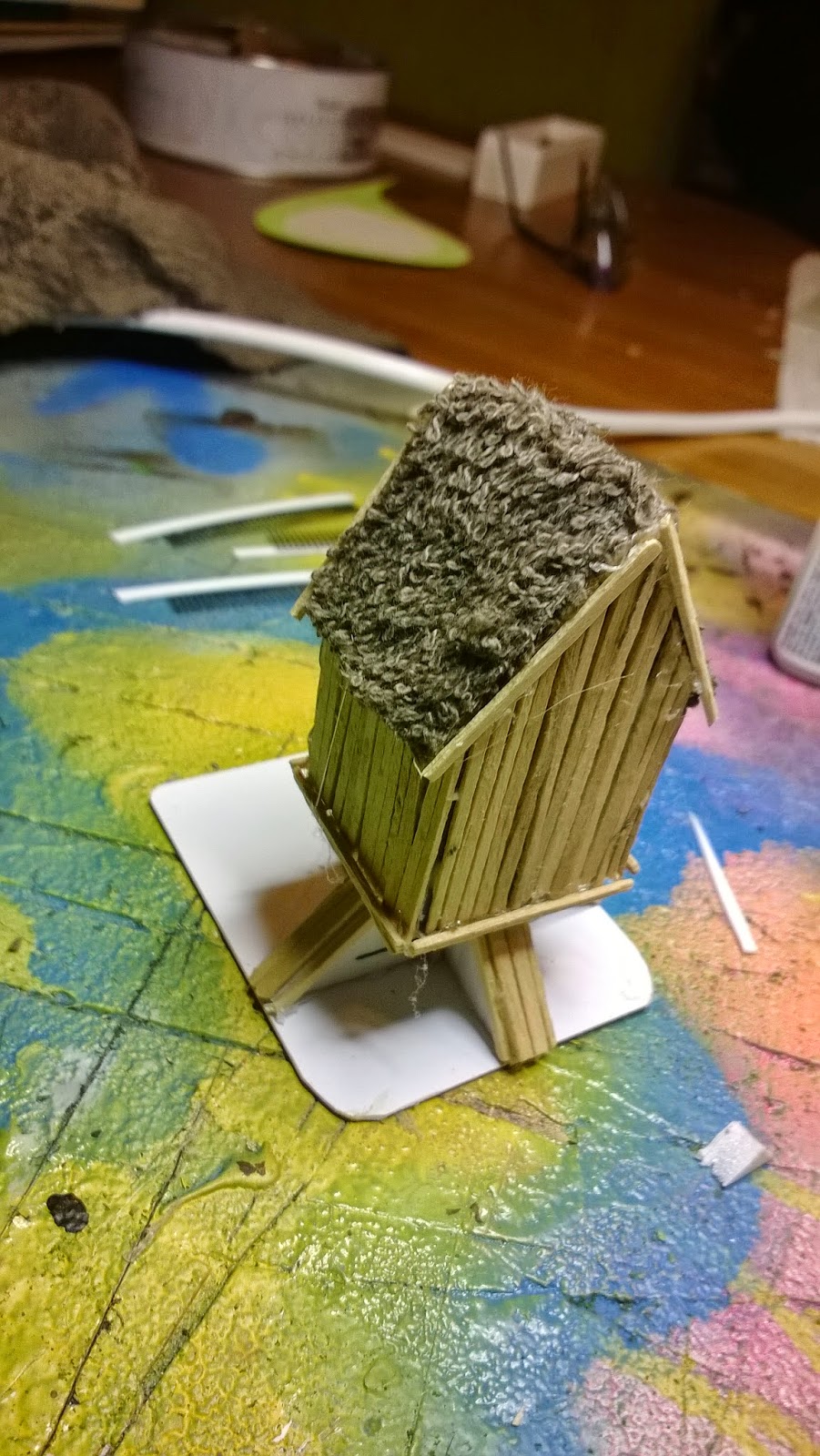 The same glue gun was used to attach the sails to a pin, which was then stuck into the upper structure. 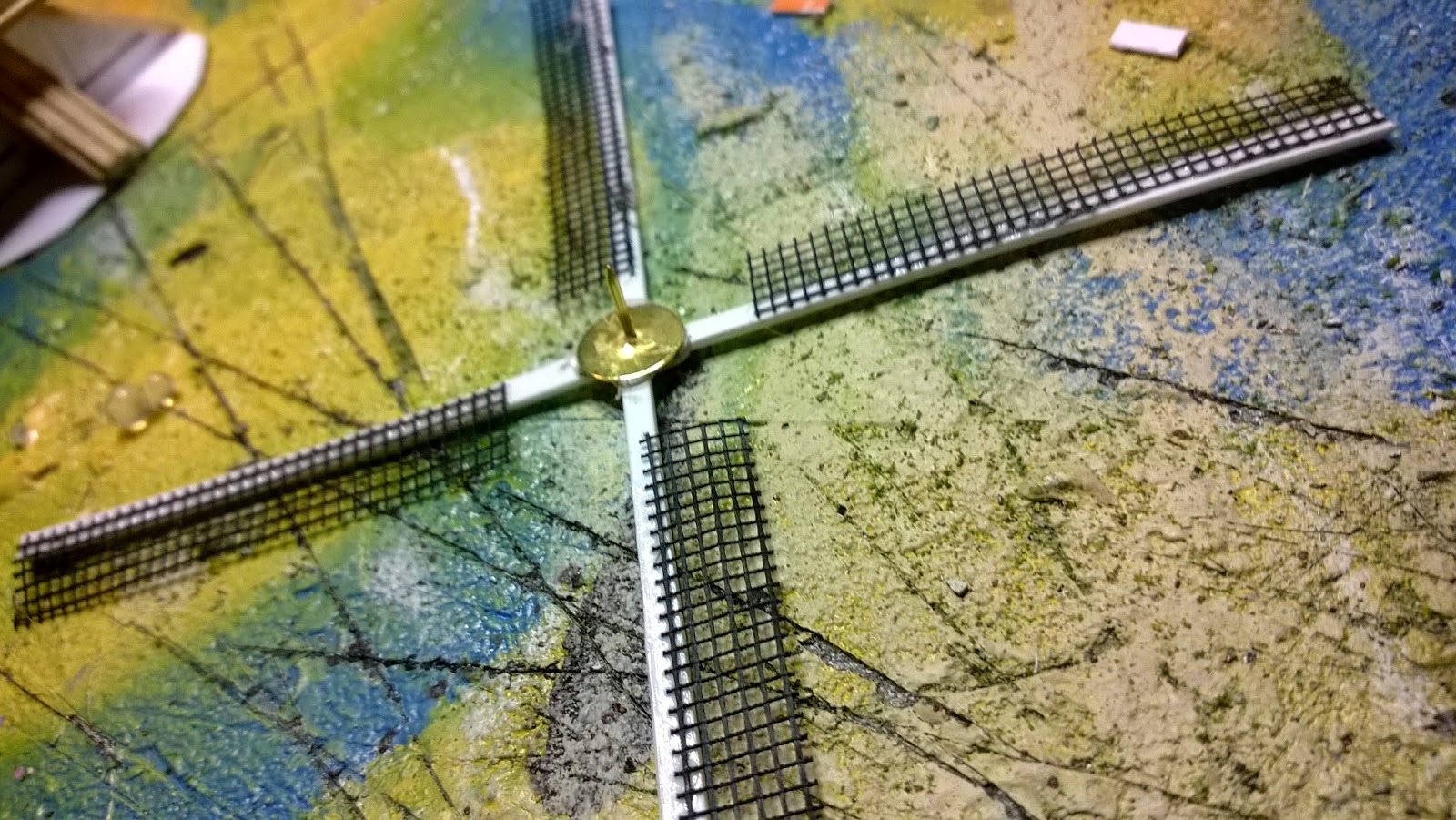 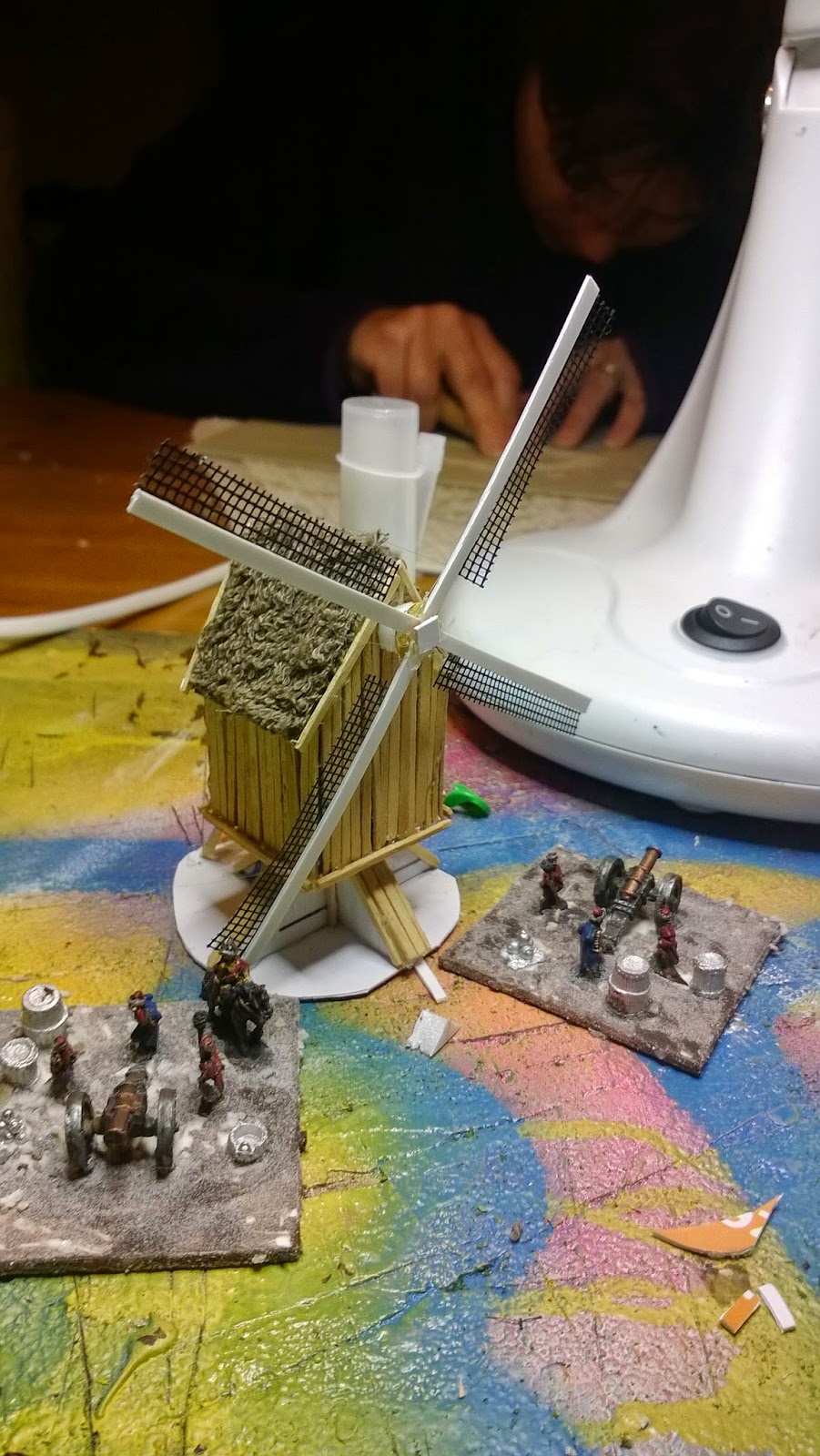 And now the windmill starts to look like one. There is a door in the back with a stairs leading down.

Here are some 10mm Pendraken figures shown for scale.

And below there's the windmill painted. Sprayed black, highlighted dark brown, grey and light tan with some flock added to the base and the roof in some places. 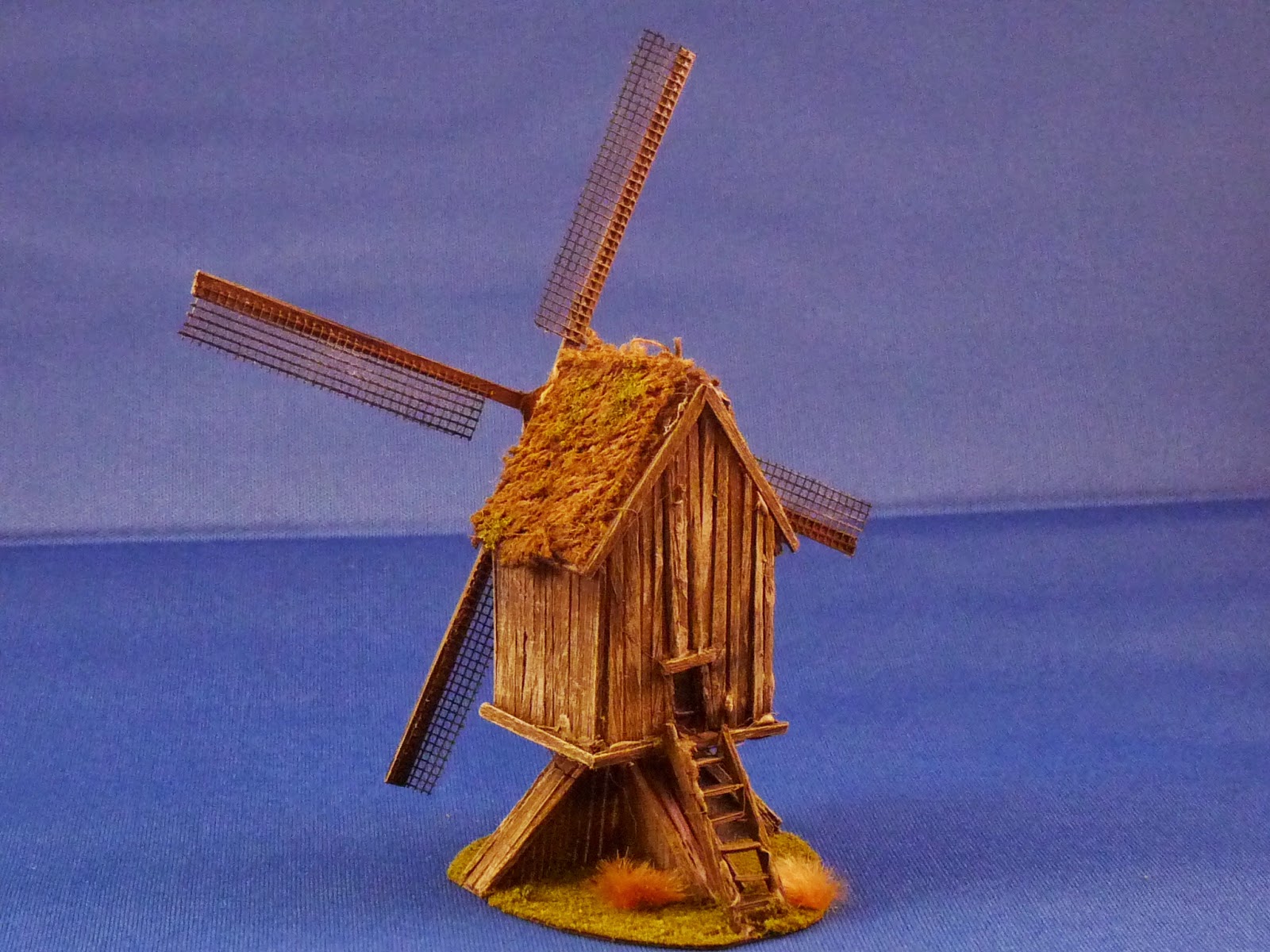 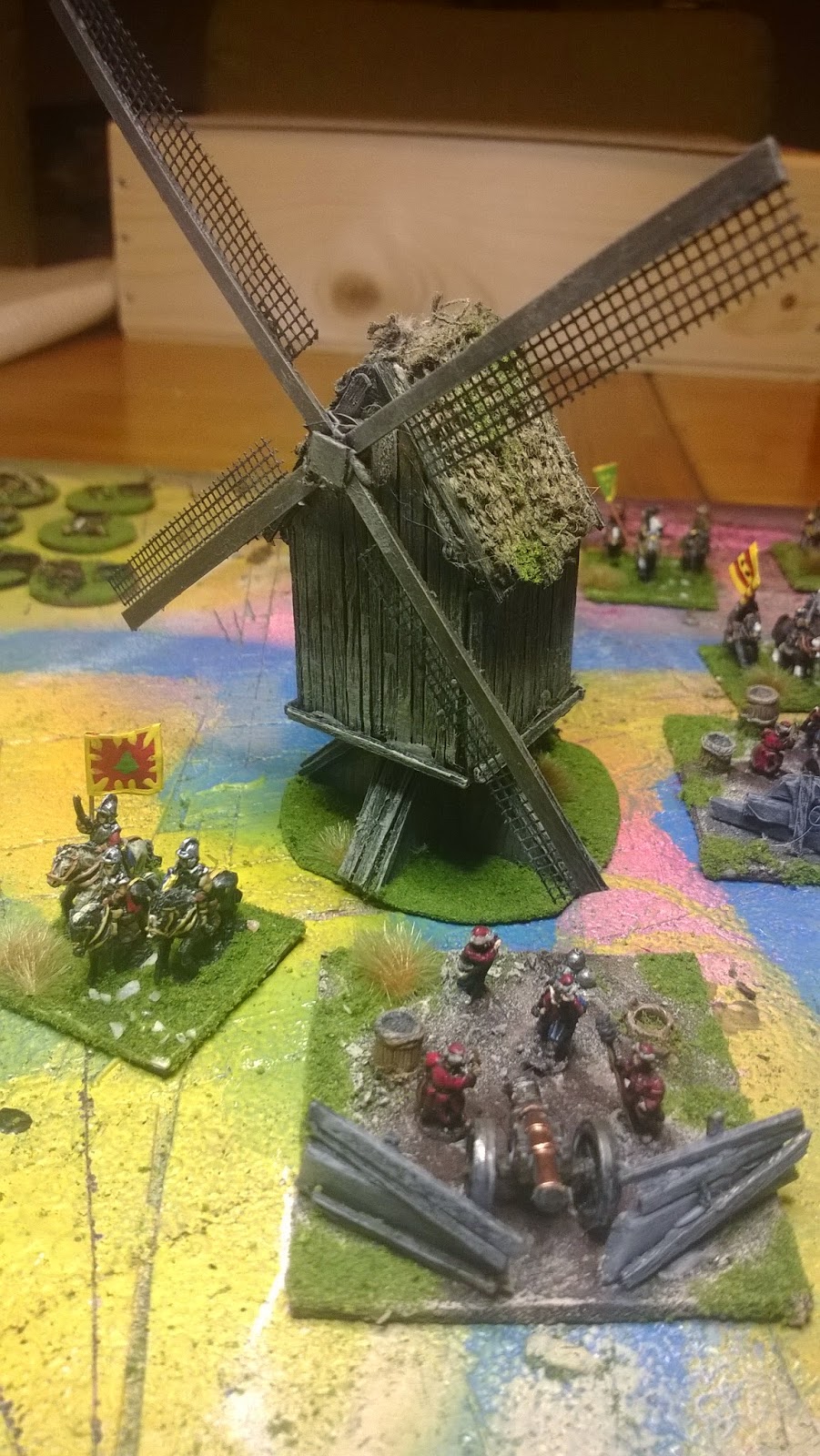 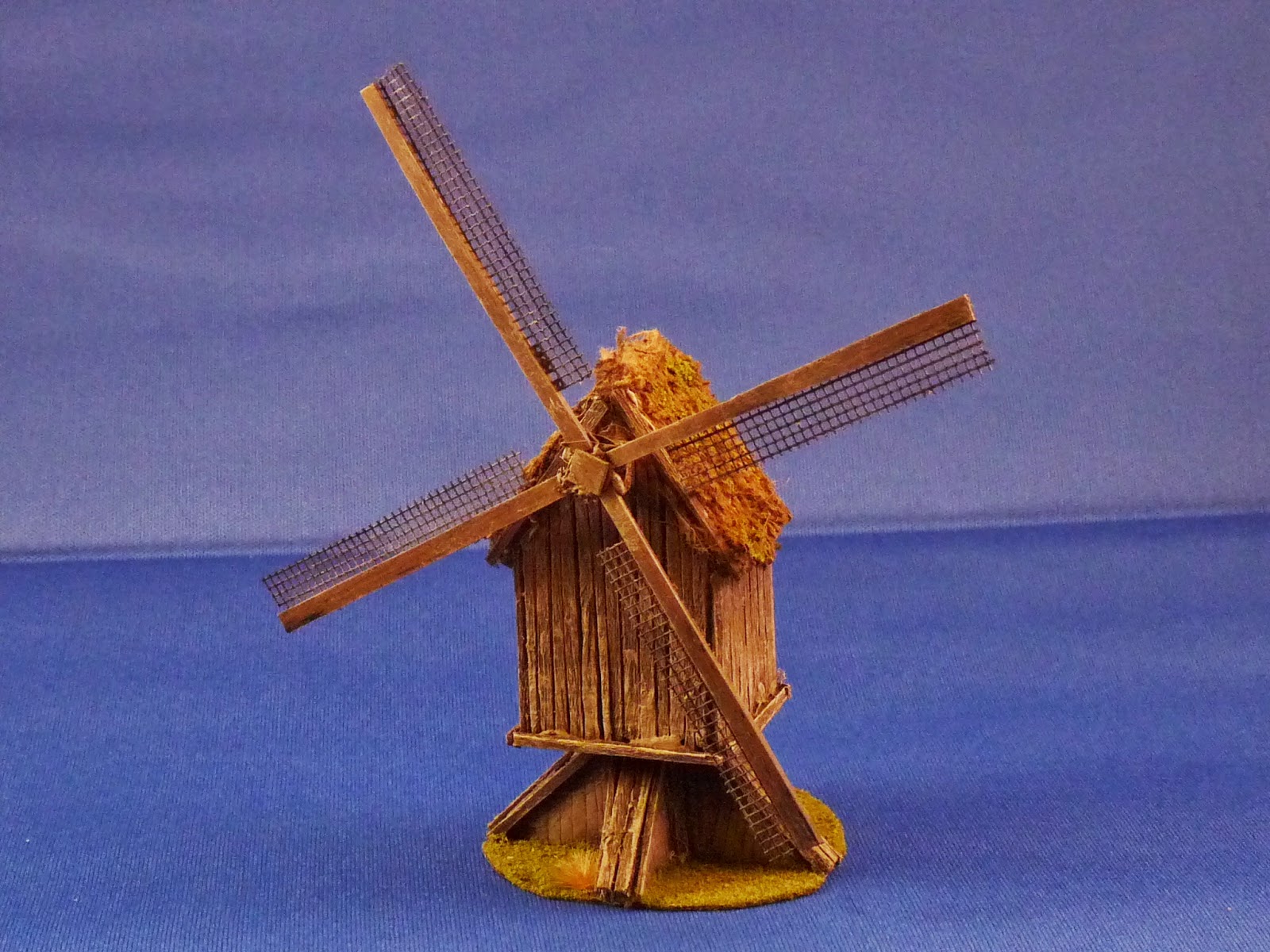 And some bases painted in recent weeks shown for good measure. Cuirassier and Croat command bases.... 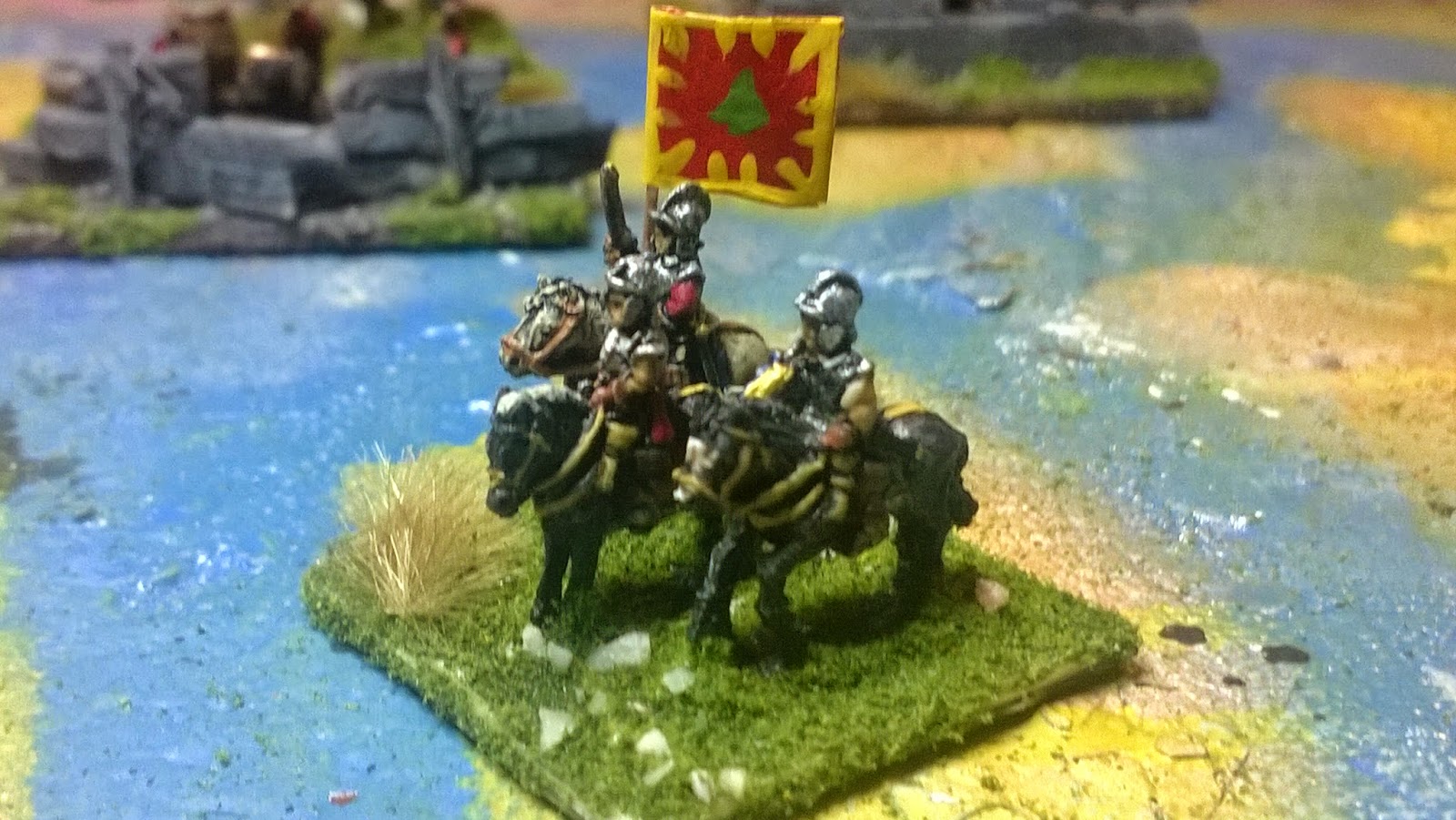 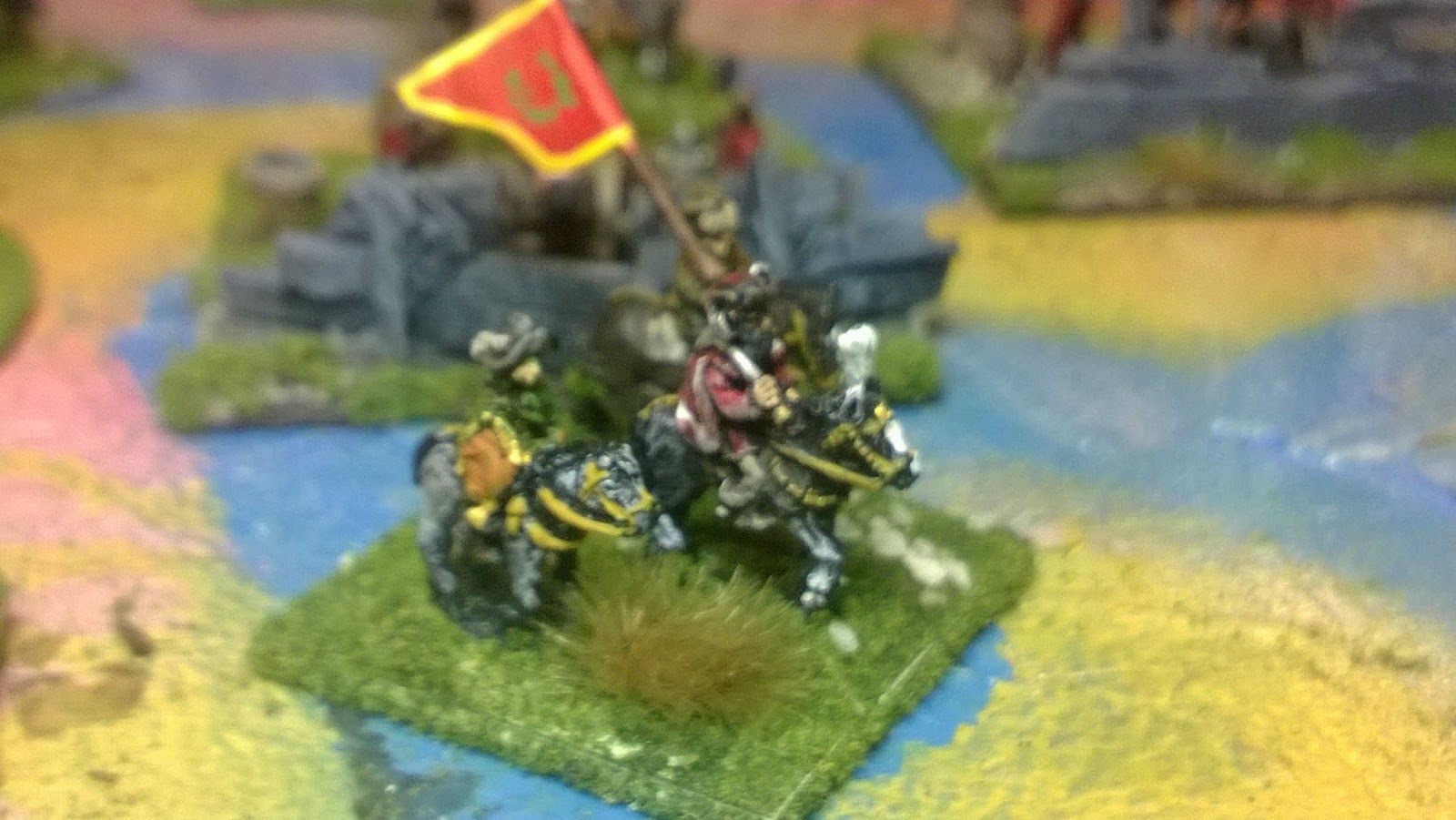 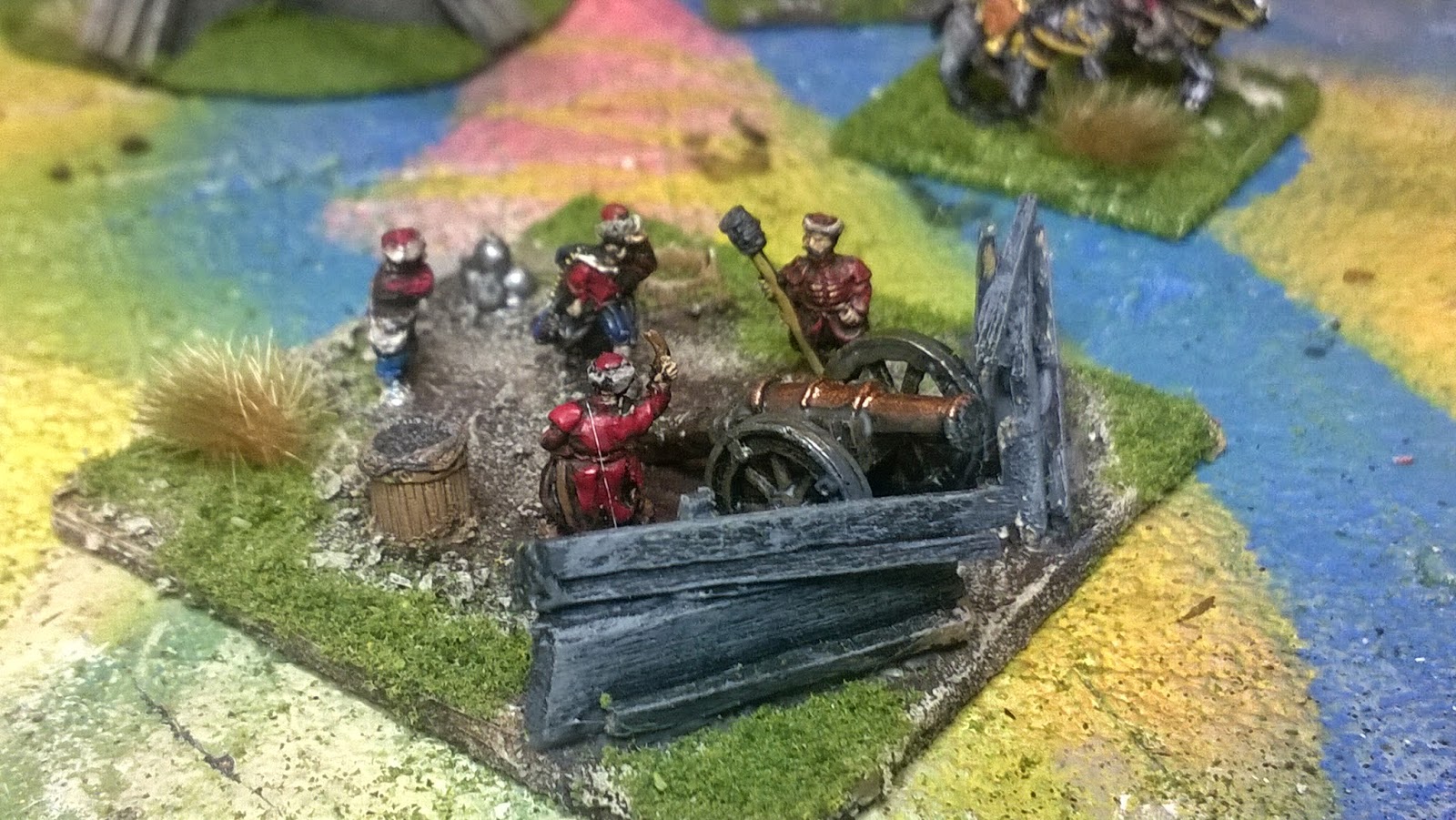 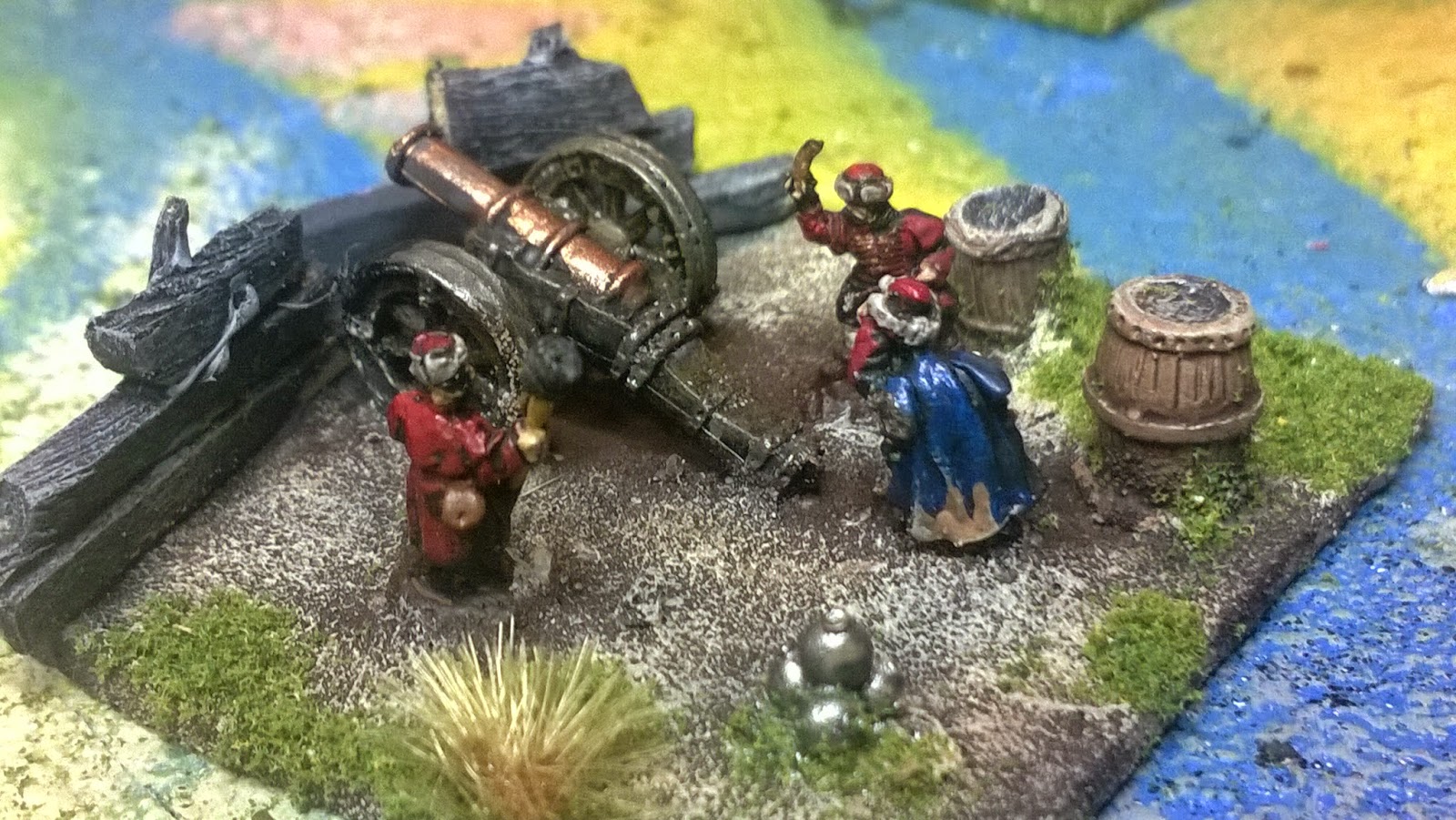 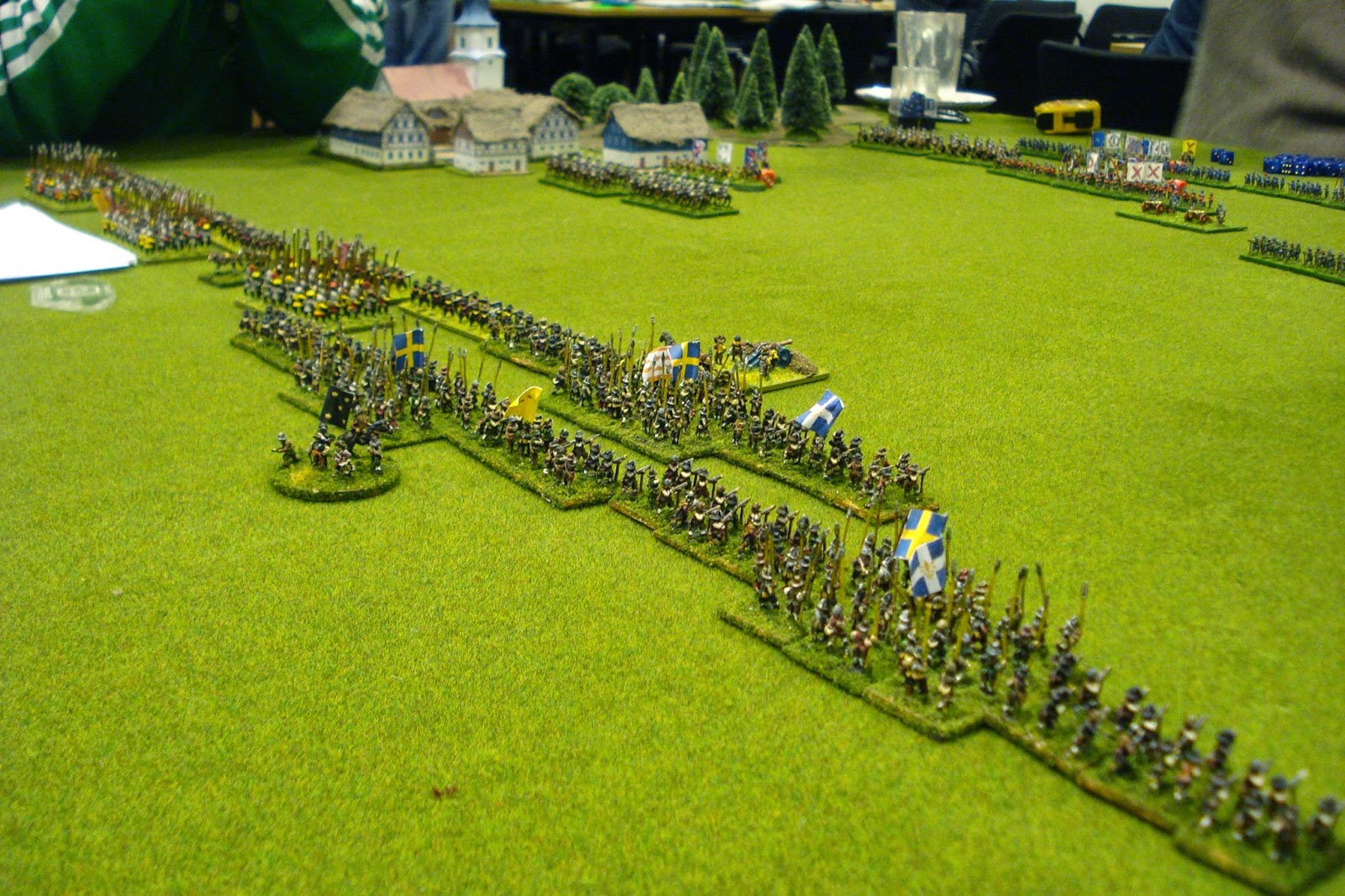 A few weeks ago we played the battle of Fleurus at the club. Our growing 10mm armies easily filled a medium table as the Catholic Spanish force clashed with the German Protestant army. Above the Protestant line of battle, classically made up of battalias in the center, ordnance up front and cavalry in reserve at the back.

Below the Spanish line, likewise deployed, only with their cavalry in classic fashion divided between the flanks. 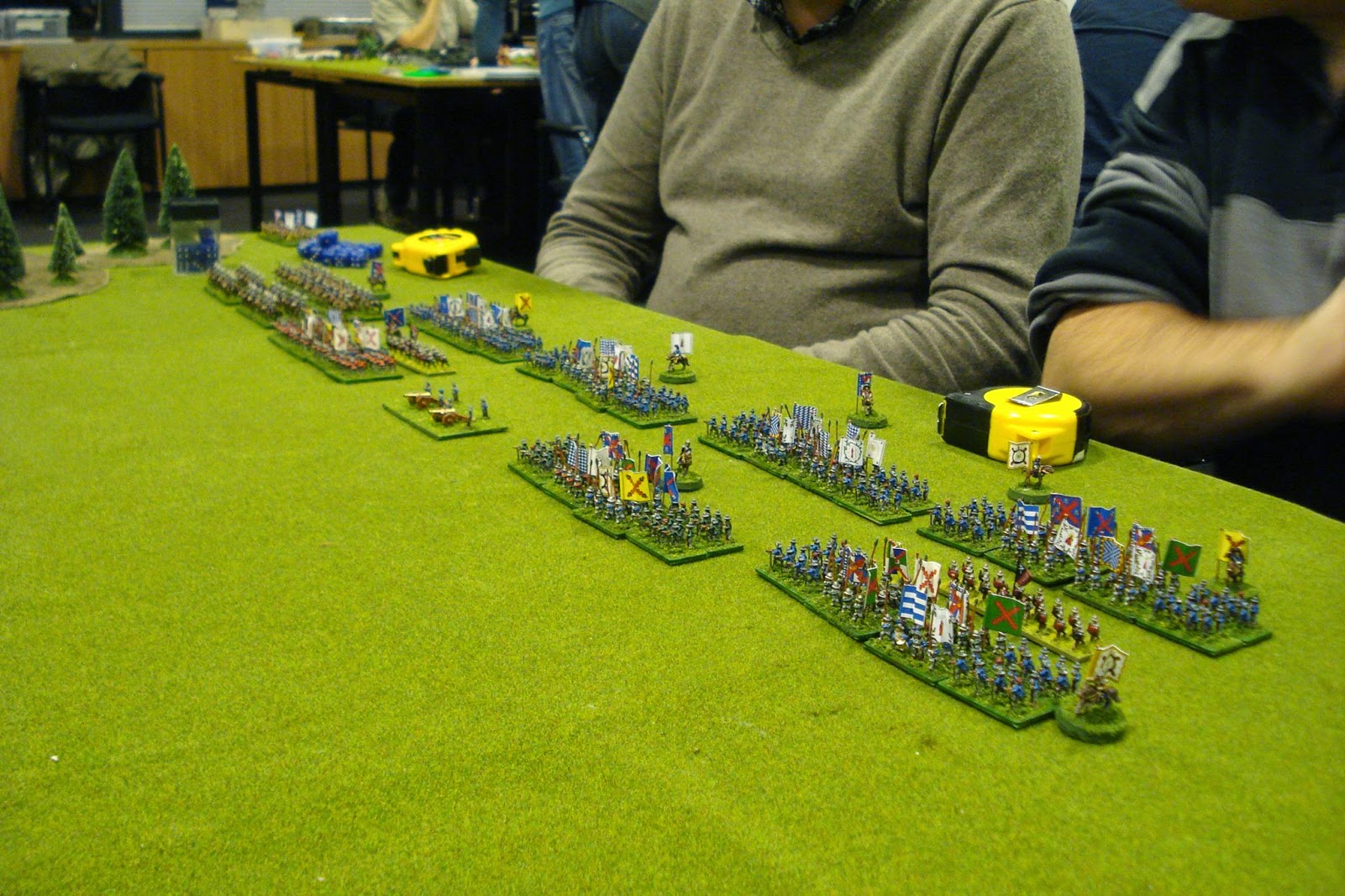 On the right the Protestant Cavalry moves to the right wing in an attempt to
outweigh their Spanish counterparts there.
The Spanish did not counter the move, hoping to get the advantage where their cavalry would have the upper hand. 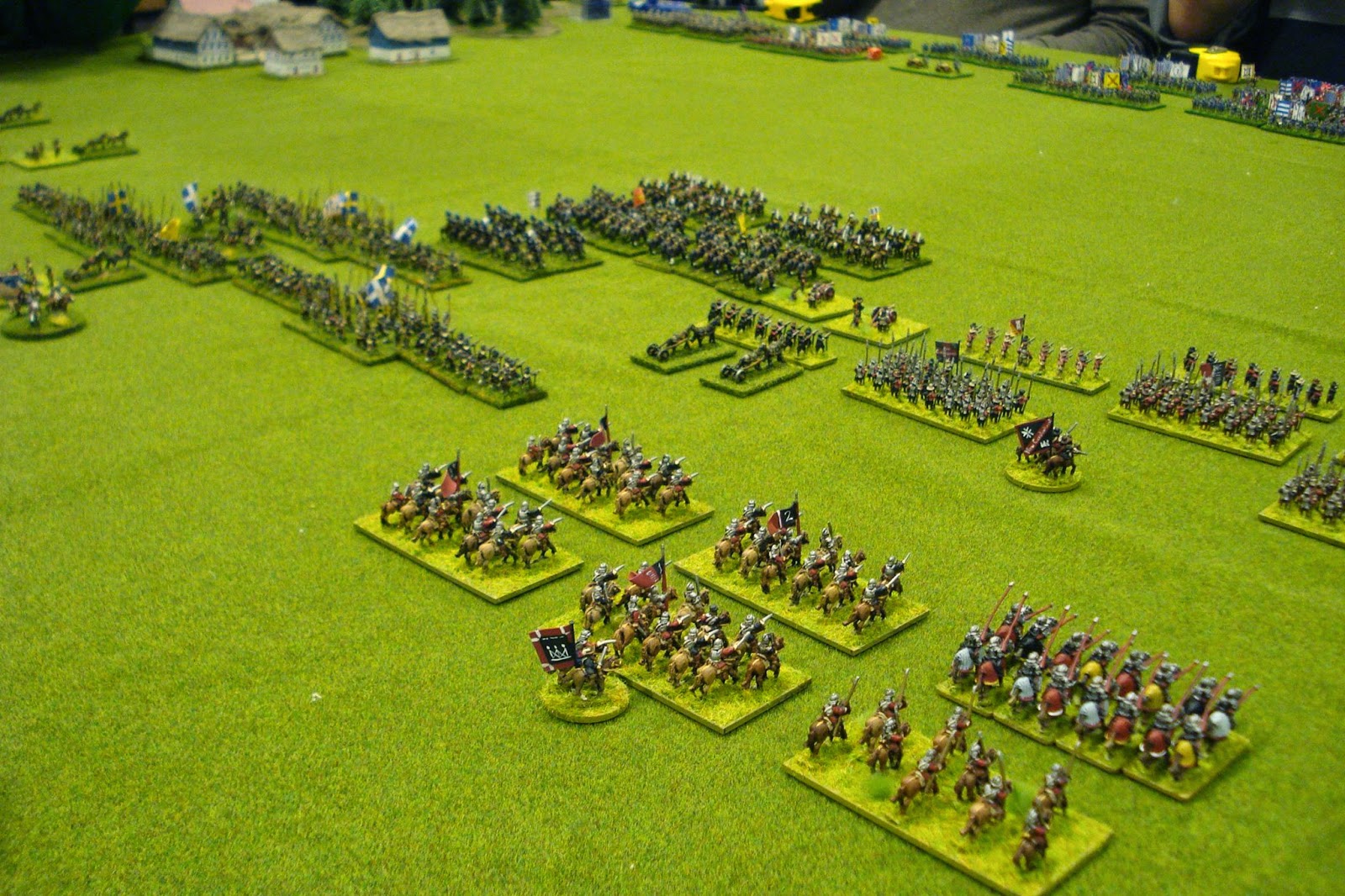 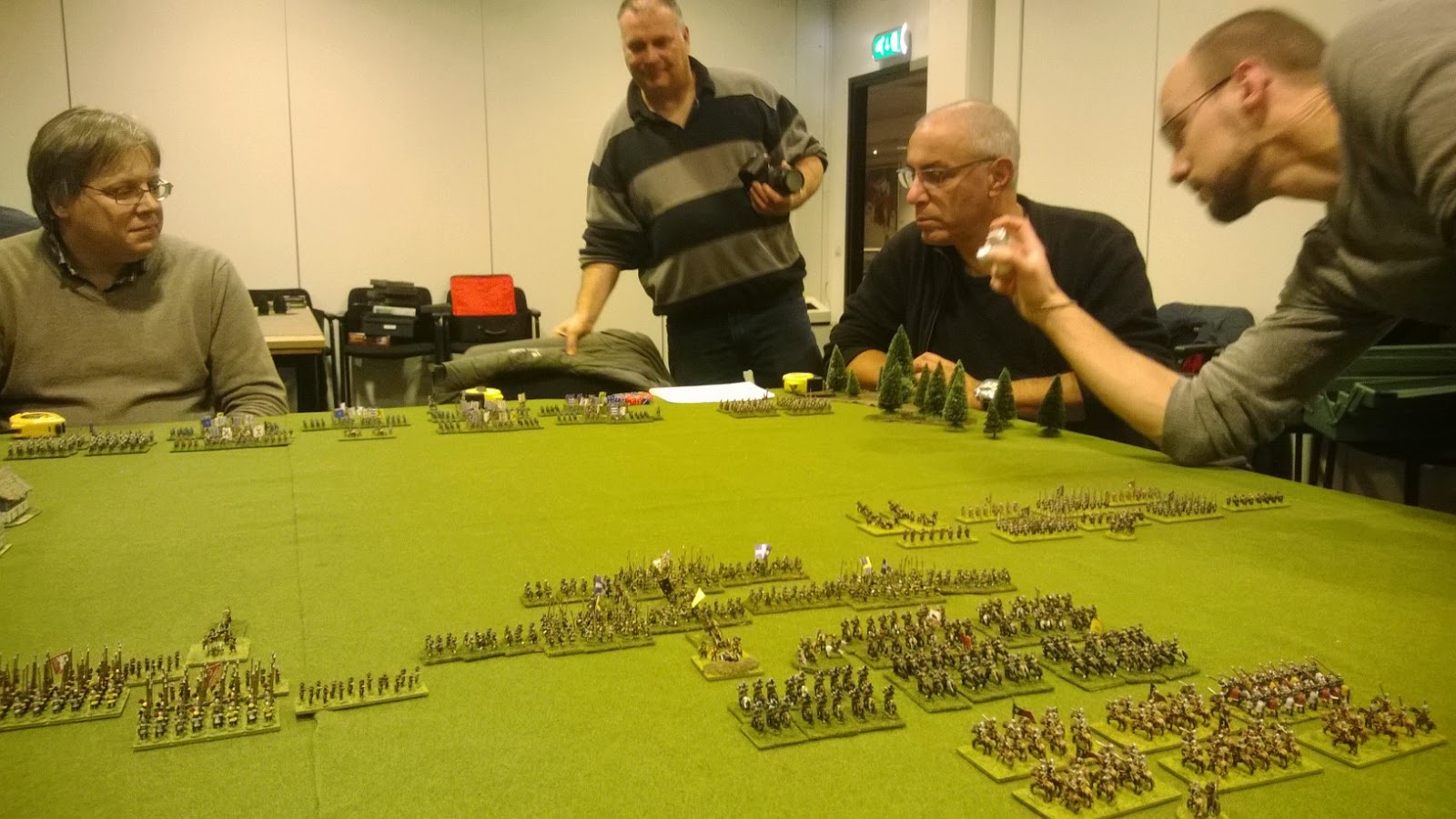 An overview of the entire battlefield. 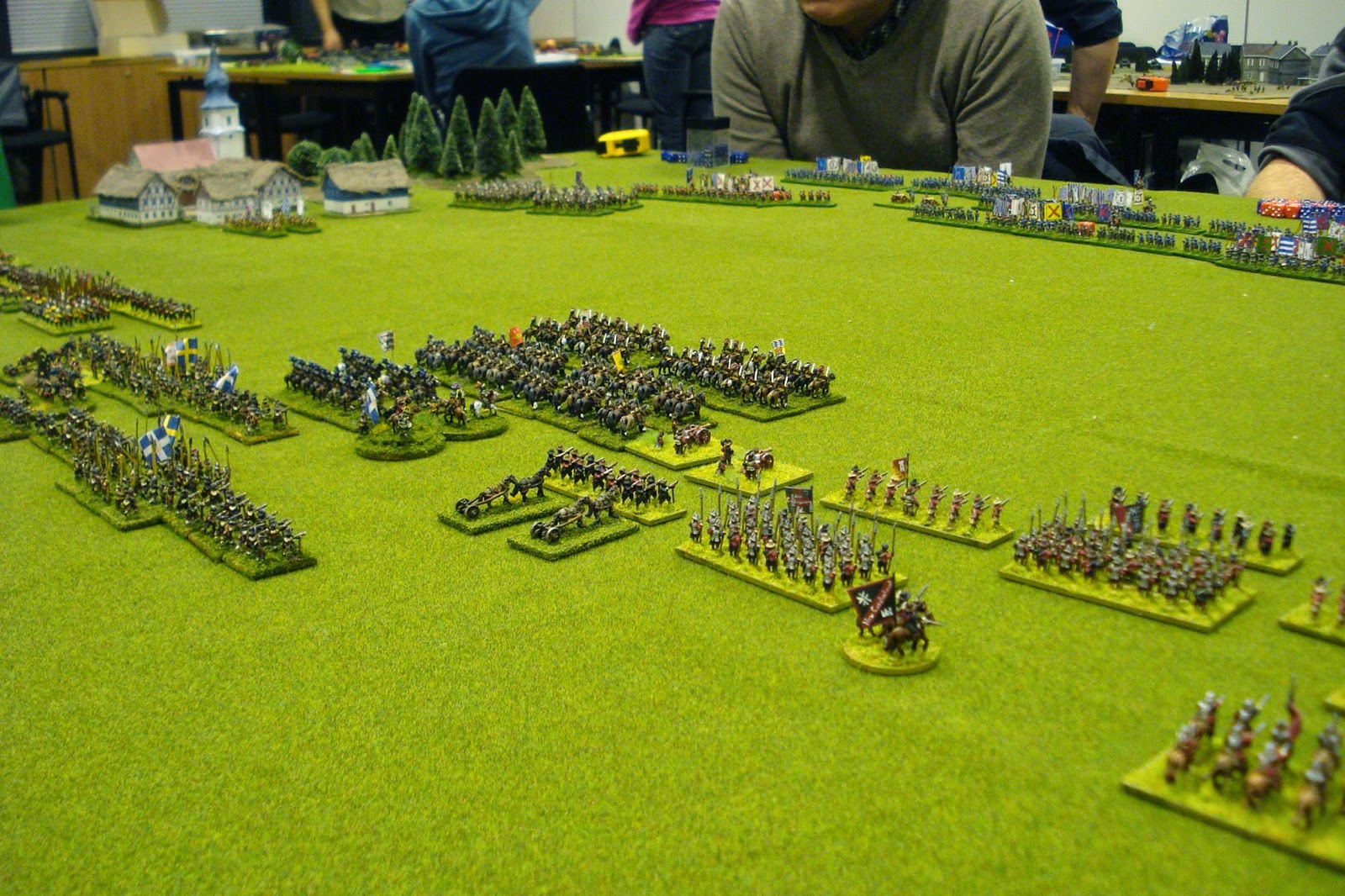 Below Protestant Cavalry masses for the attack.... 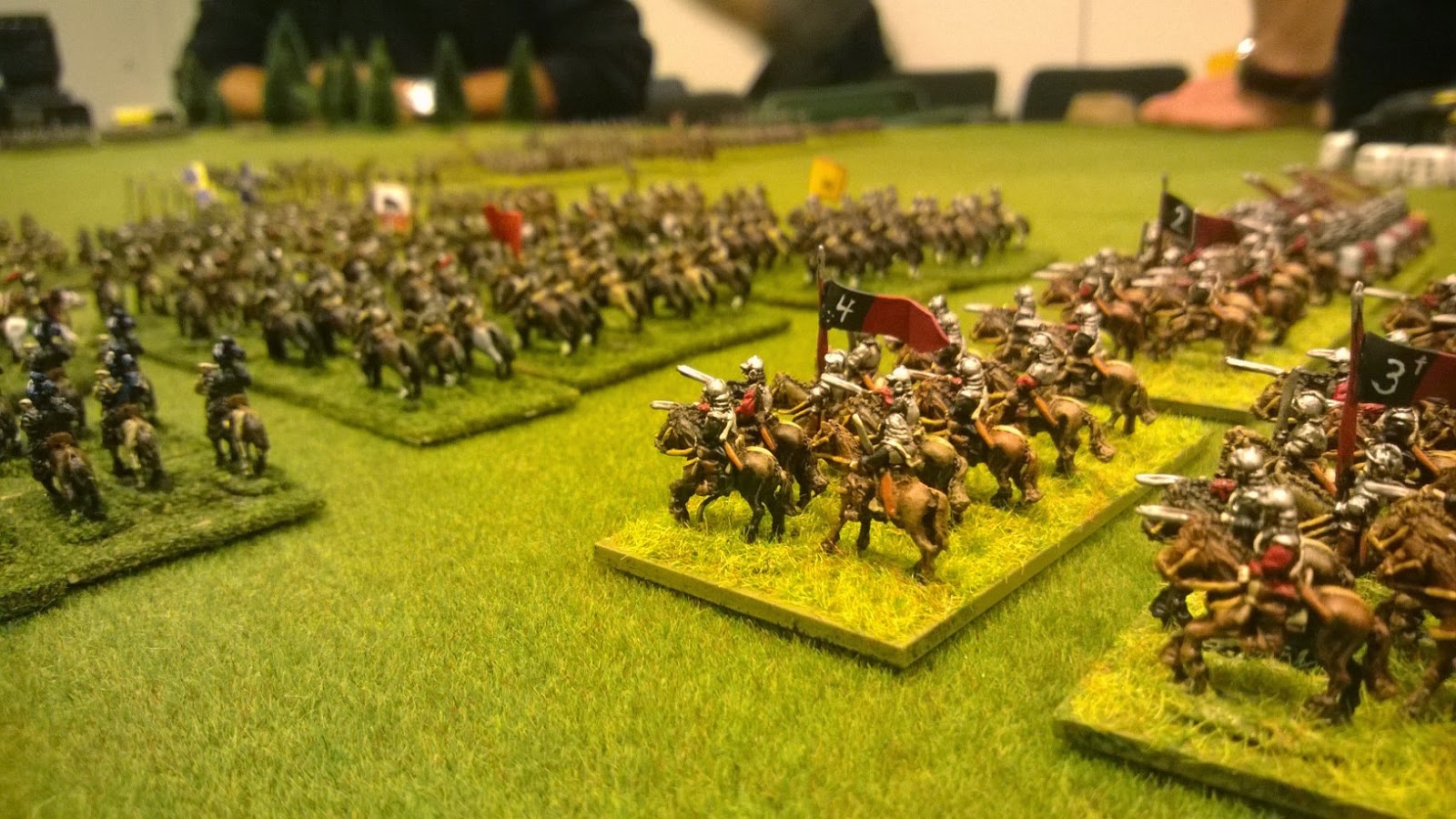 ... while the infantry in the center awaits their moment. At this time the Spanish were advancing and Protestant guns were at play. 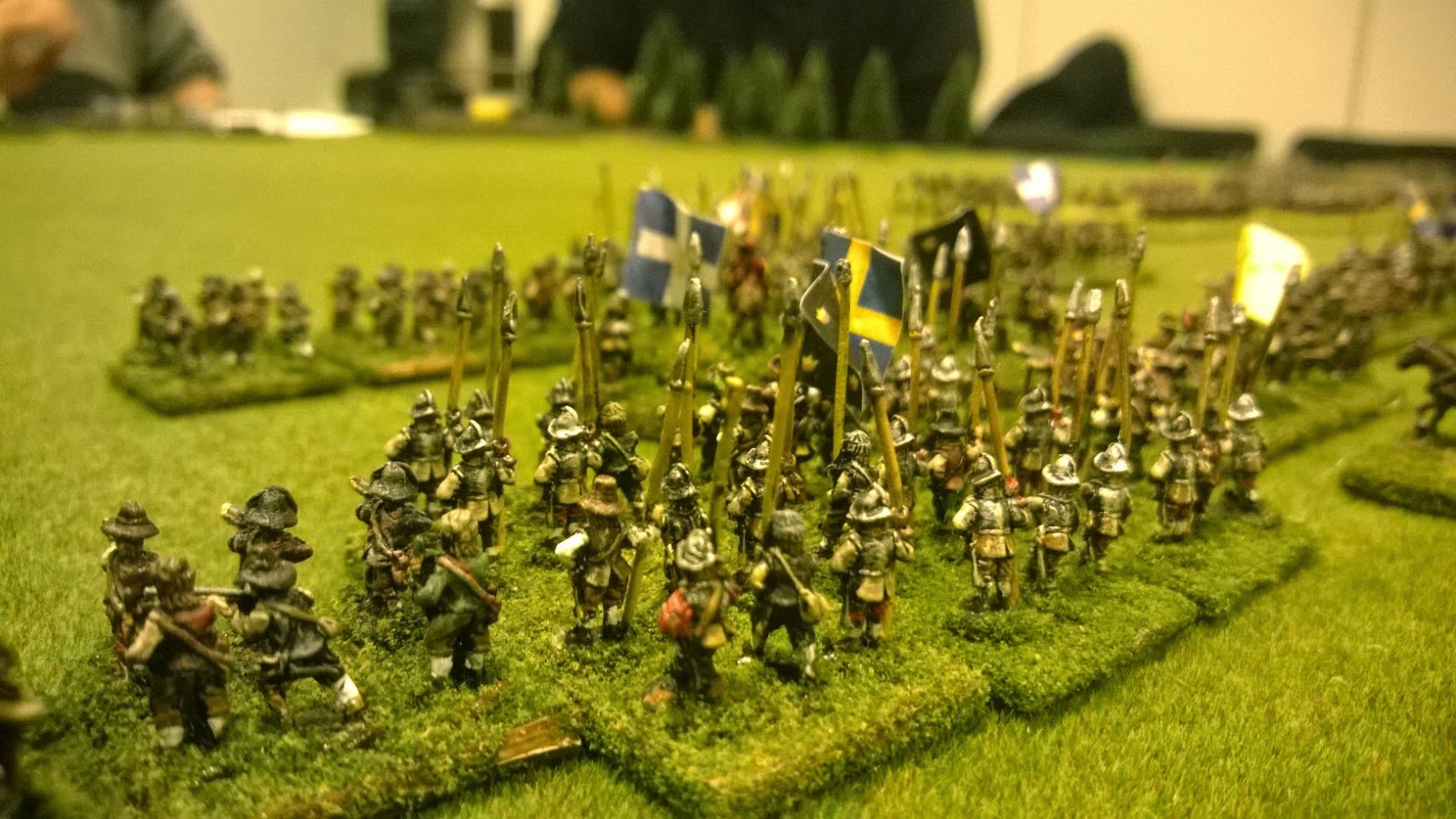 The Protestant gambit paid off. The Spanish failed to mount a coordinated attack on their right wing where their cavalry outnumbered the Germans and were stalled and driven back piecemeal. 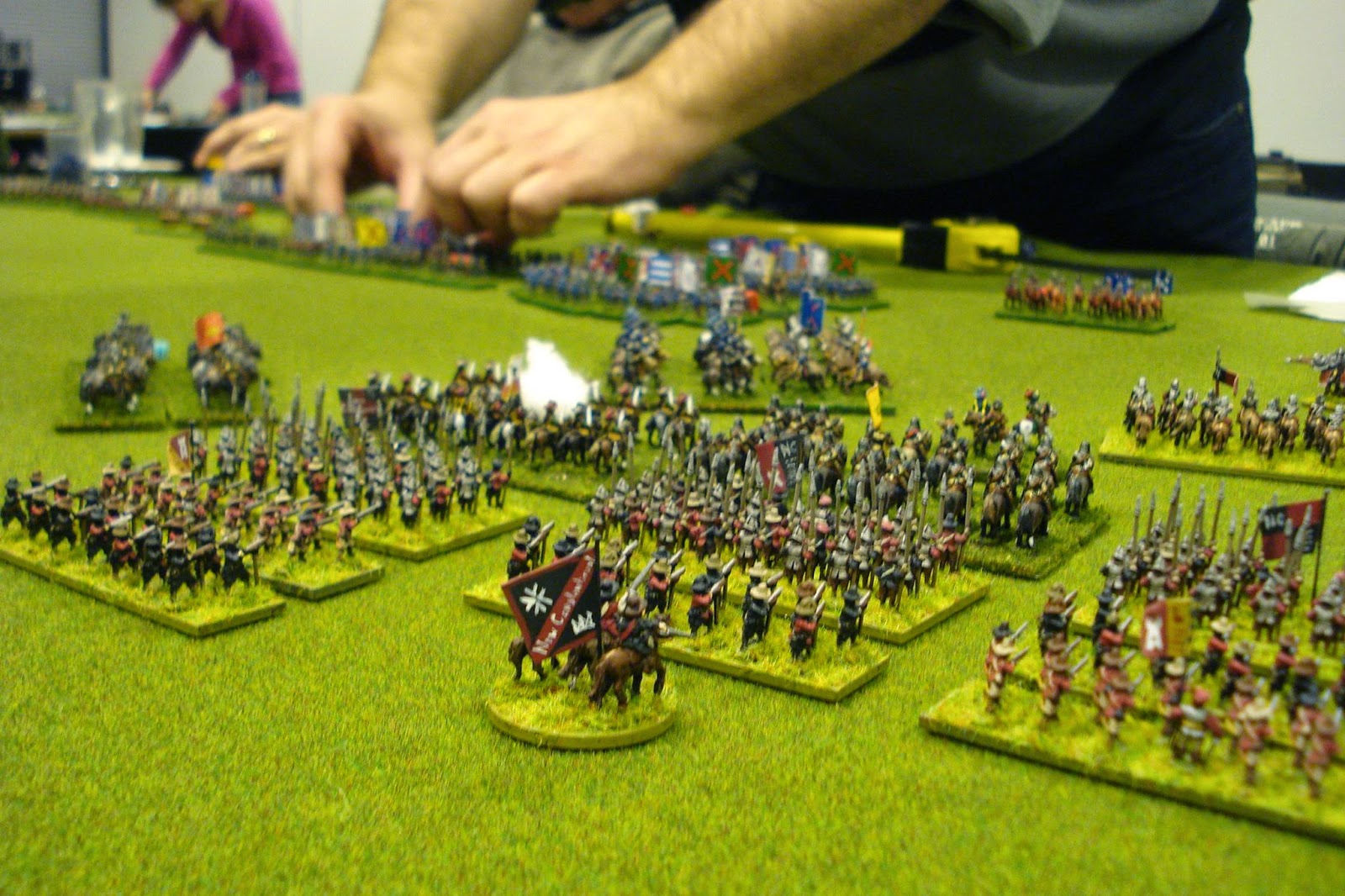 On the German right on the other hand the mass of German cavalry charged their Spanish counterparts and despite fierce resistance eventually overwhelmed and destroyed them. They then proceeded to threaten the Spanish tercios there who where obliged to withdraw into hedgehog formation. These in turn suffered terribly from Protestant guns and musket fire and were eventually broken by the attacking German infantry. On the left the Protestant still held on, but their fight was over: the Spanish broke and withdrew!

A most unhistorical and convincing victory for the Protestant cause. Figures used were mostly 10mm Pendraken. Rules were Warlord Games' excellent Pike & Shotte rules. Great game and many thanks to Gerco, Ivo, Rob and Patrick for participating in it!