Battlefields through the ages have always been criss-crossed with all kinds of obstacles. No matter how well the commander chose his battlefield, it rarely was as flat and empty as many of our tables.

Since centuries many rural sites have been crossed by hedgerows to mark terrain borders or herd cattle. Hedges are therefore one of the most generic terrain types possible. I made some many years ago but they were too few (and too ugly, to be honest) so I decided to take a second stab at it. Quick and dirty was again the motto. I have seen some real works of modelling art used as bocage, but I had little time and limited resources, so what I had, had to do and be finished in a day.

I based my design on the French bocages of Normandy fame. But they can be found all over Europe.  A low earthen wall, topped with sturdy hedge plants left relatively uncut forms the basis. The hedge plants are often woven back into the foliage, producing over the years a nearly impregnable organic wall, ideal for keeping cattle in its place. As Normandy proved, it worked relatively well for tanks too! 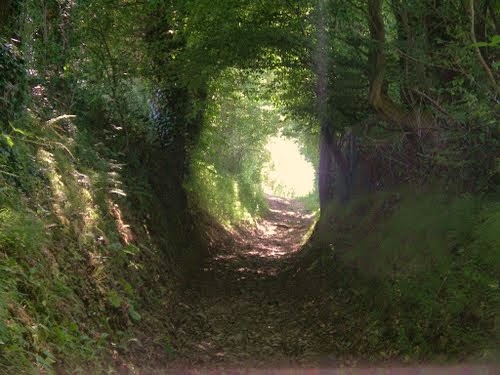 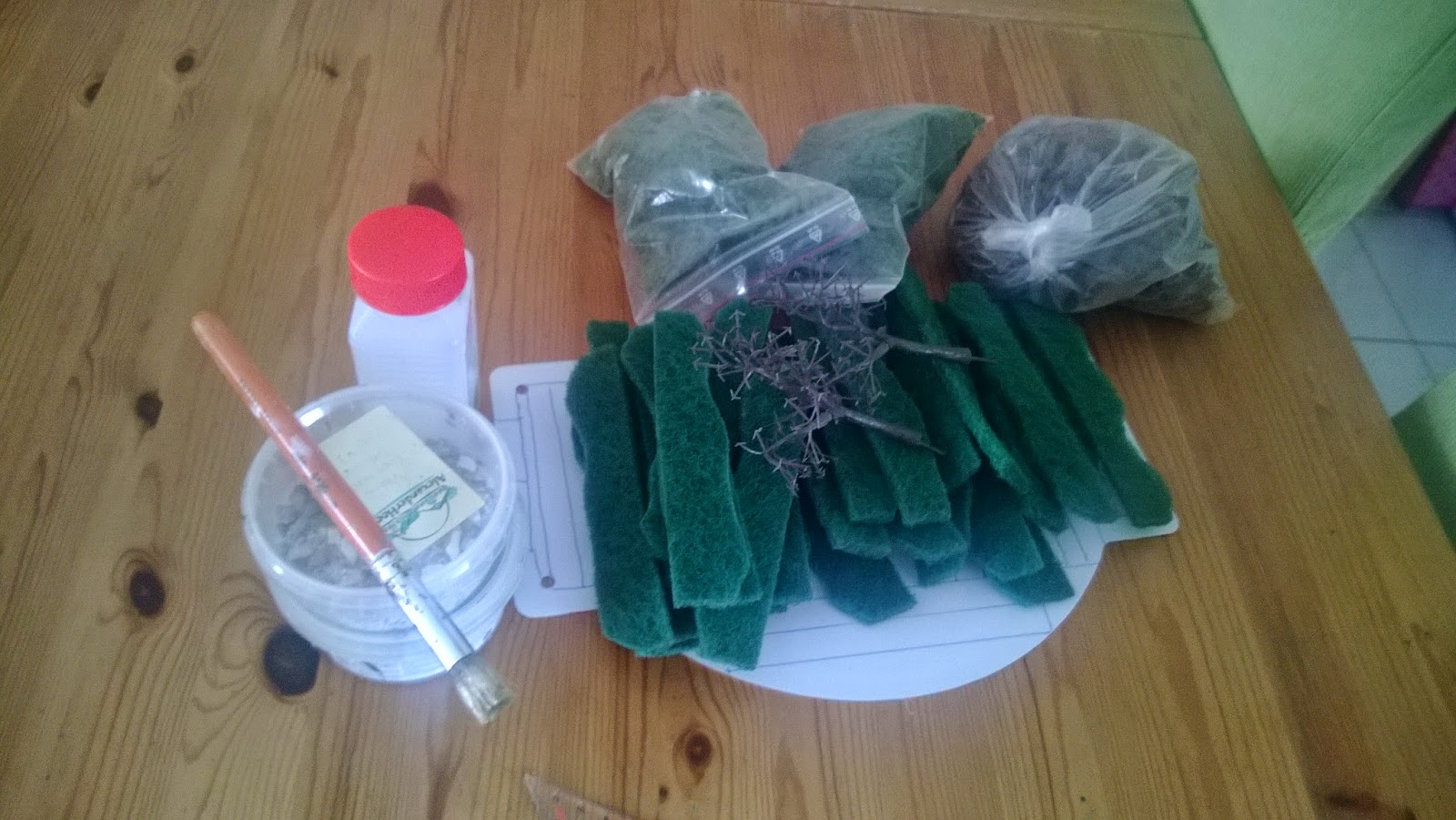 I cut the bases from plastic sheet (some sign I had lying around) and made crude earthen walls from cut styrofoam. On top of those I places the cut cleaning pads, cut with an irregular top to represent the wild growth of the average rural hedgerow. I used a hot-glue gun for this part of the assembly.

As you can see below I made most of them the same length, which makes it easy to build up the table. I made some corners and shorter pieces to fit the odd ends. I equipped some of them with trees to break the monotony and one piece showing a gap to pass through. 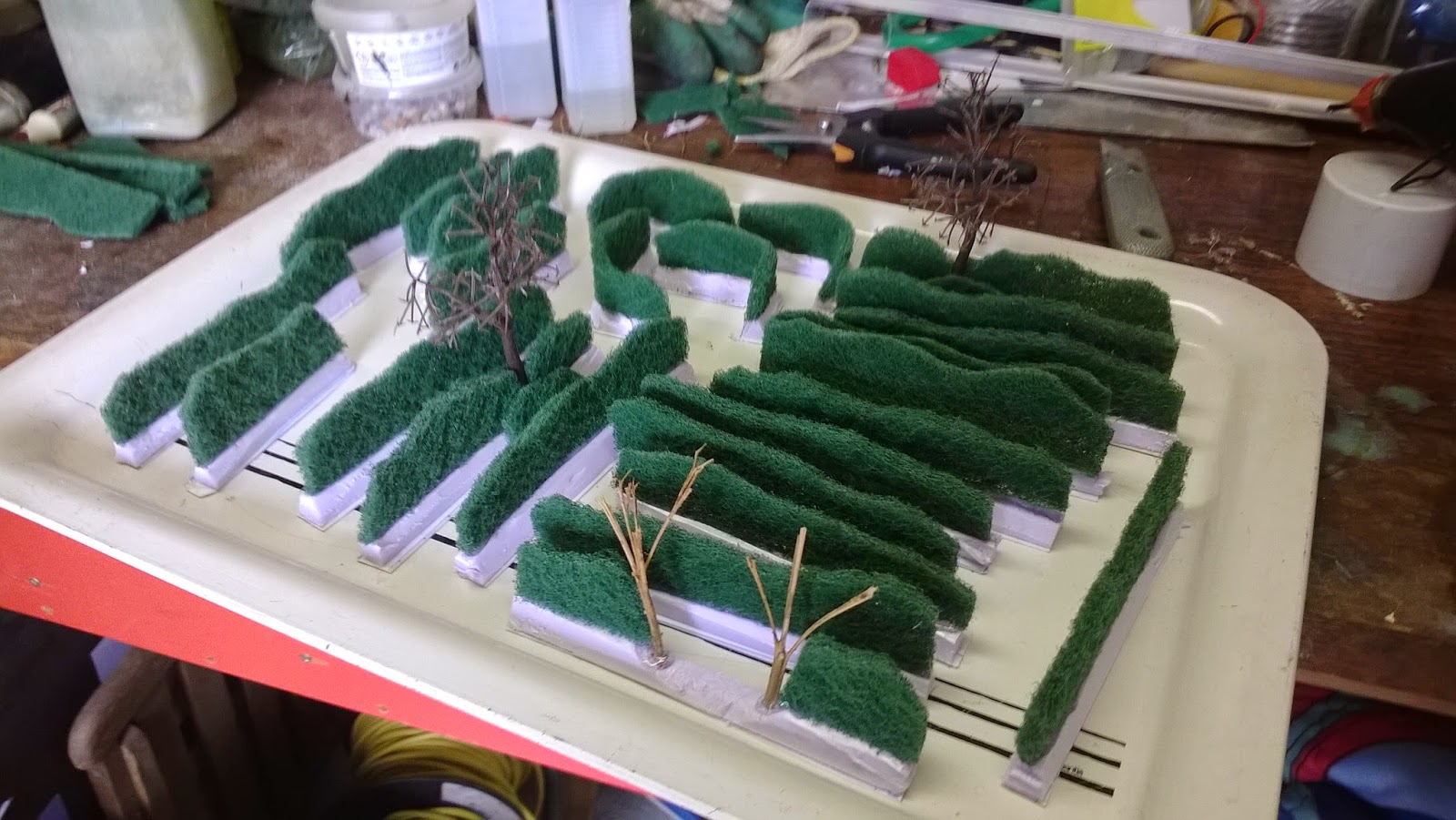 For the next step I mixed several grains of sand and grit for the covering of the earthen base. Birdsand, playpen sand and aquarium bottom covering are perfect for this and can be had cheaply in large quantities. 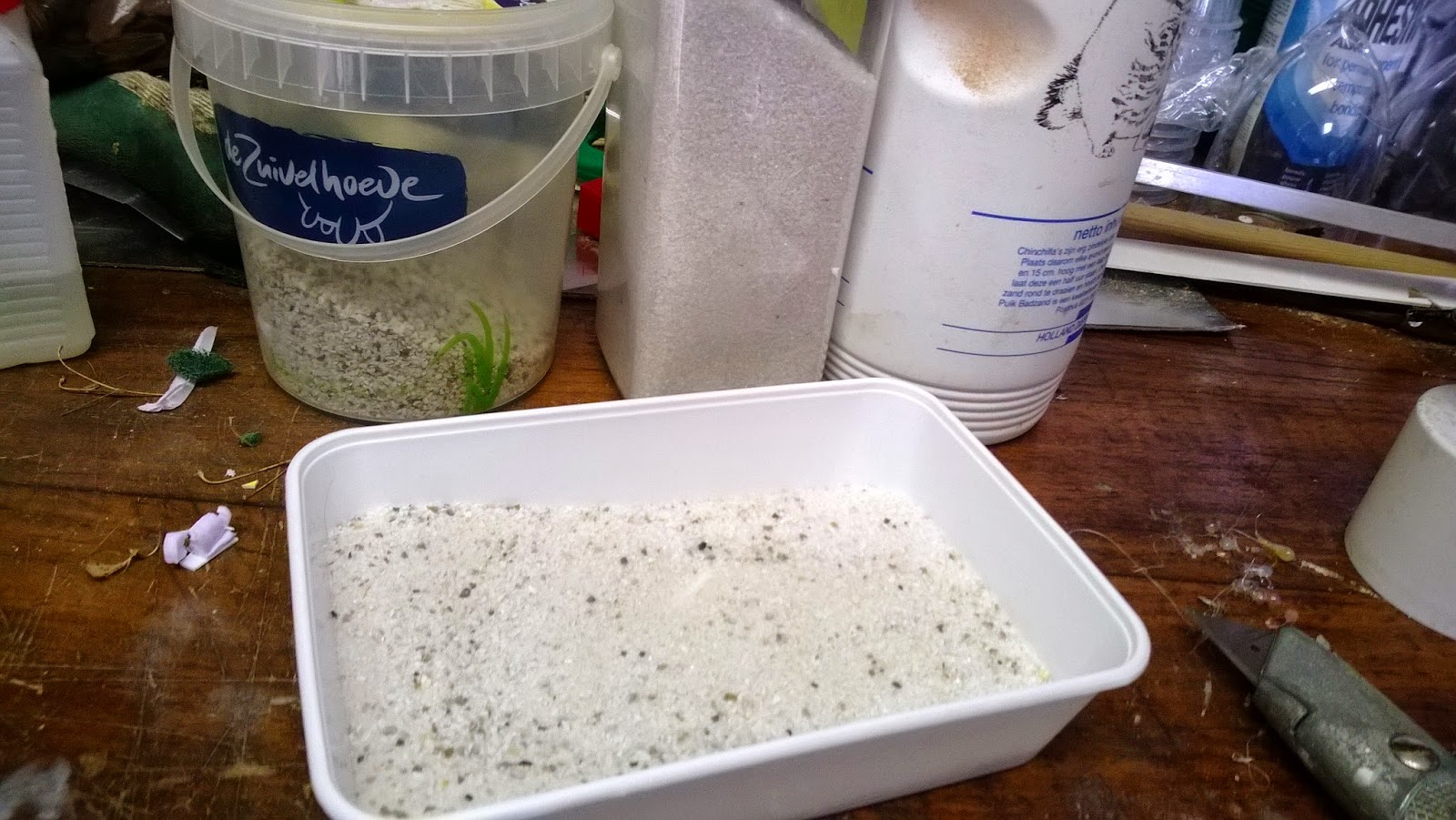 I covered the base thickly with glue (Heki flocking glue in this case) so the sand would stick well and would protect the styrofoam from the spray paint I planned to paint them with. Just drag the piece through the sand a few times and leave to dry. Left on the picture a finished example. 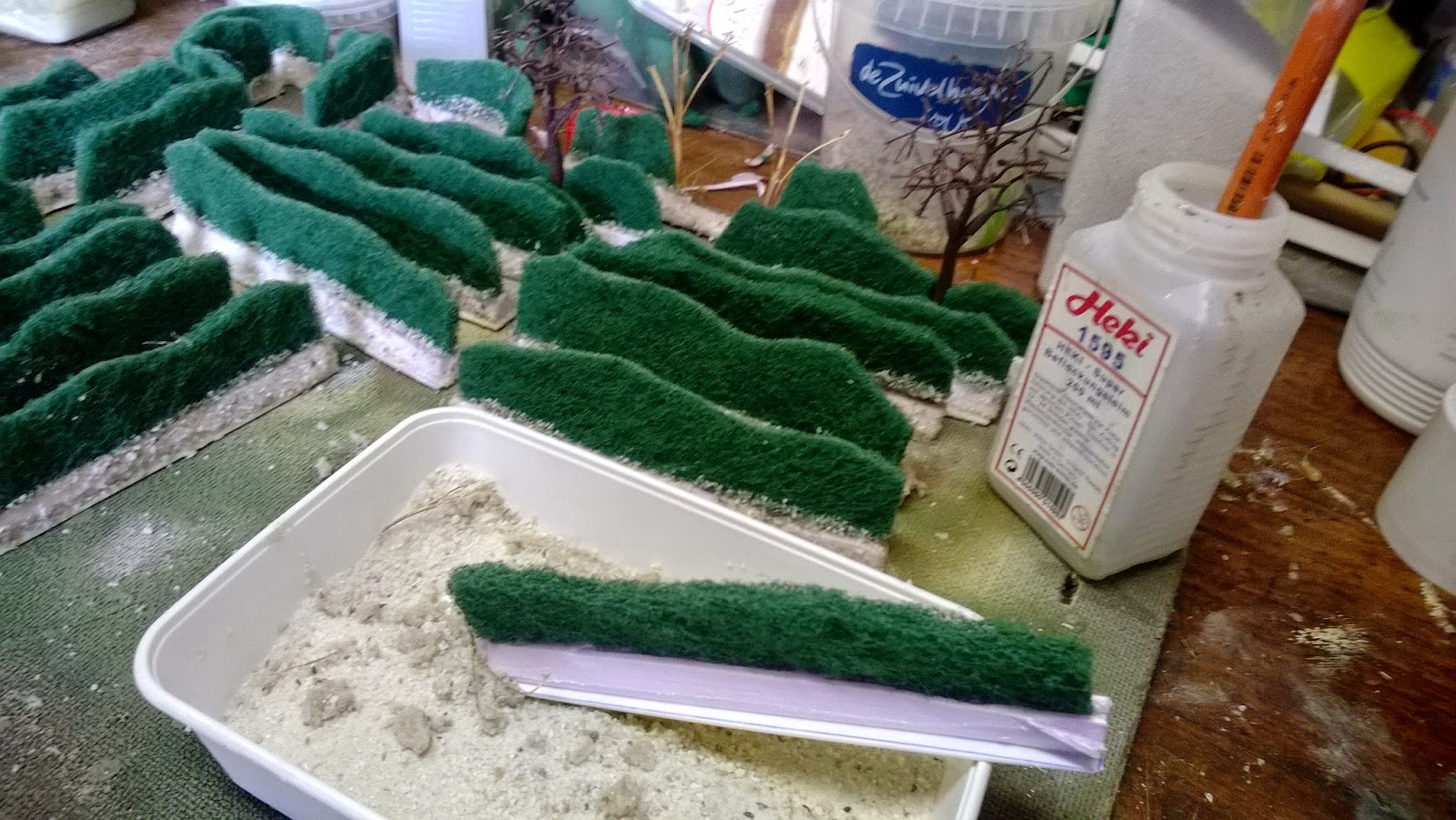 This step is essentially repeated with the flocking material. I dabbed big splotches of glue onto the cleaning pad hedges and just pushed them into the flocking stuff. This resulted in irregular sides that reinforced the wildly growing image of the tops. Once dry, I spray-painted the hedges olive camo green to get a uniform green color. 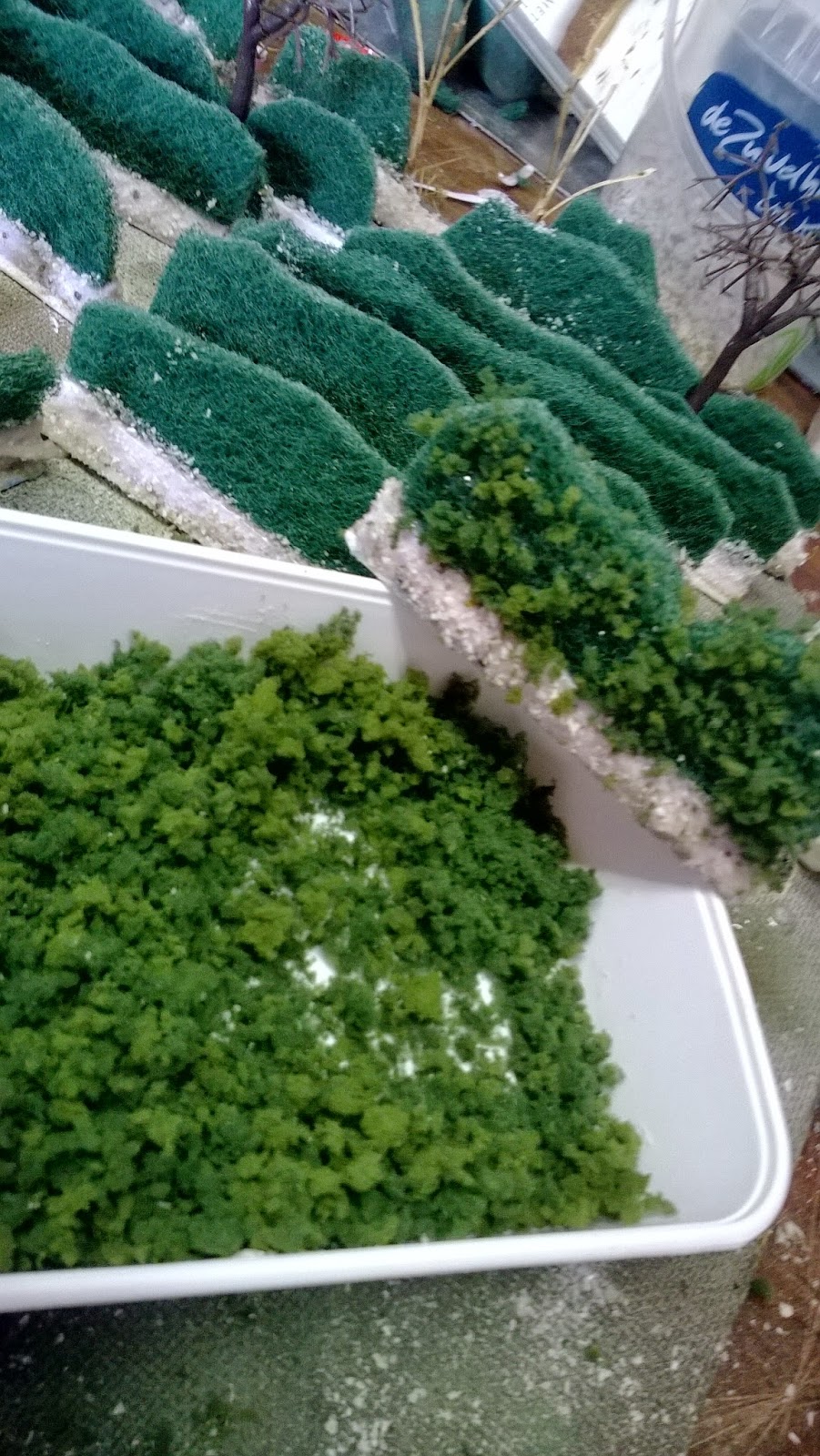 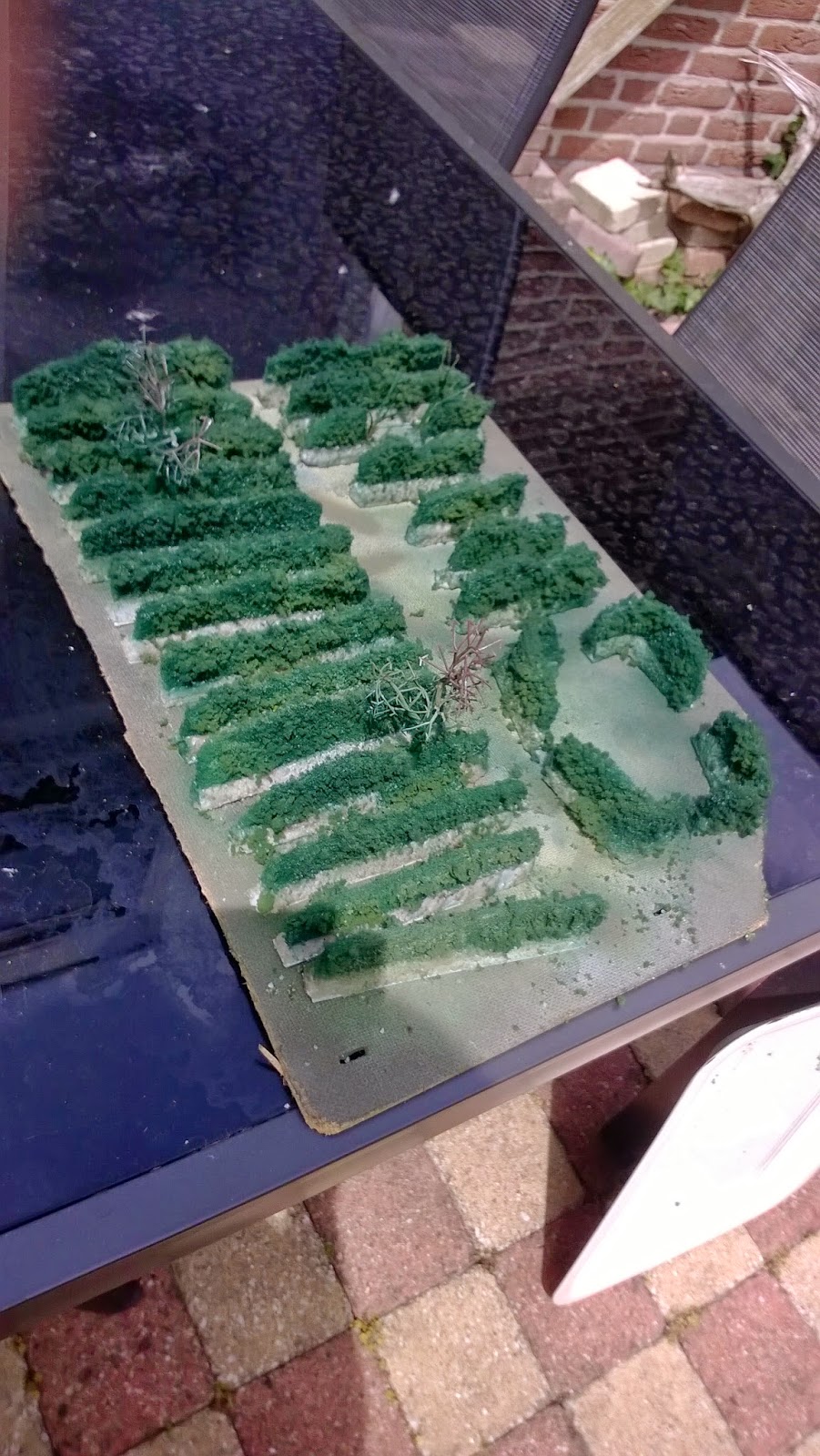 The I painted the earthen base drab brown (cheap acrylic hobby stuff) and added highlight and some grass flock to blend the hedge parts in with the Battlemat I usually use for a playing surface. A acrylic matt varnish spray to finish and fixate everything and it was done!

Below some pictures of the final result, shown next to some Foundry Home Guard and a Warlord Matilda II. 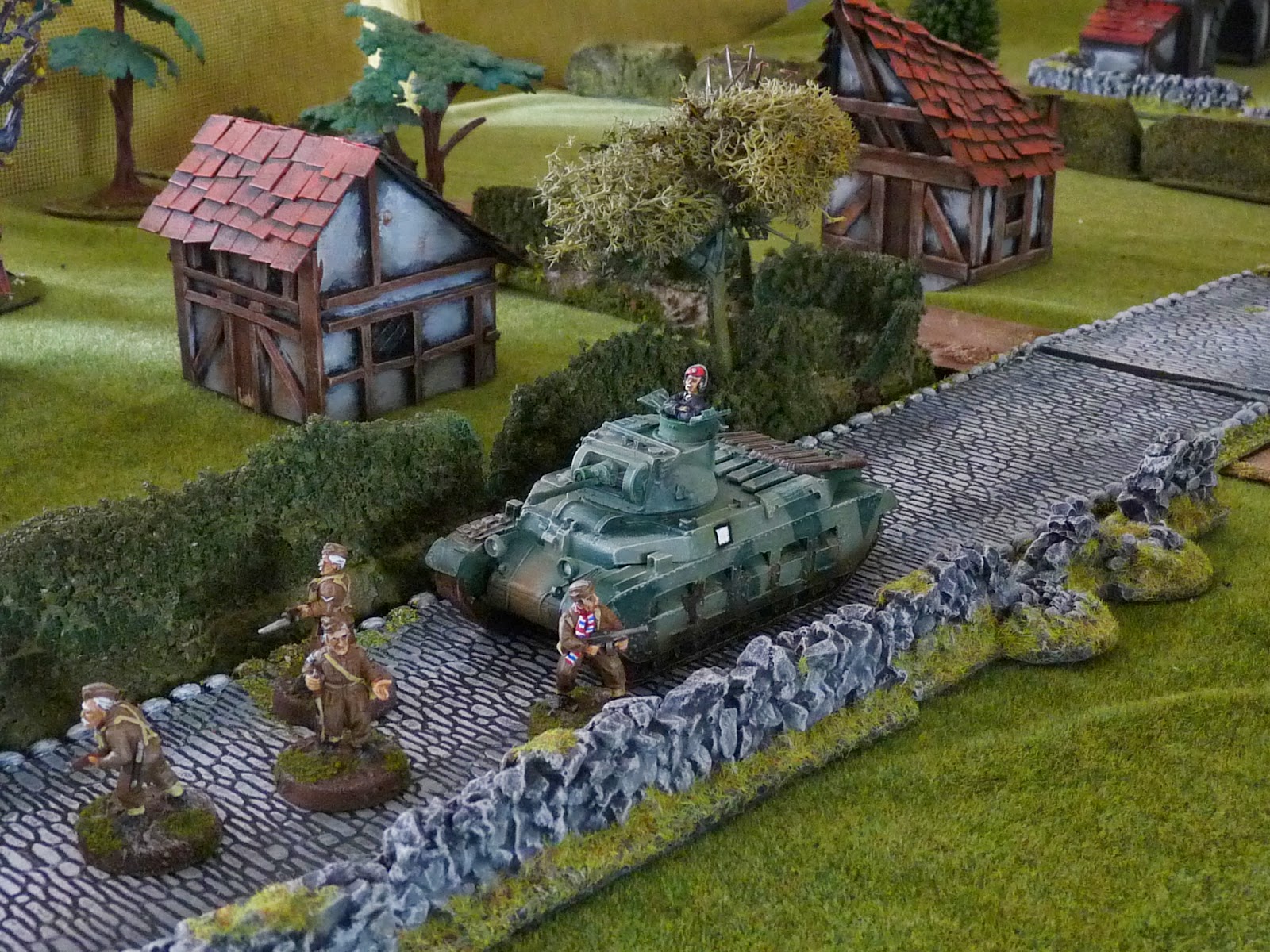 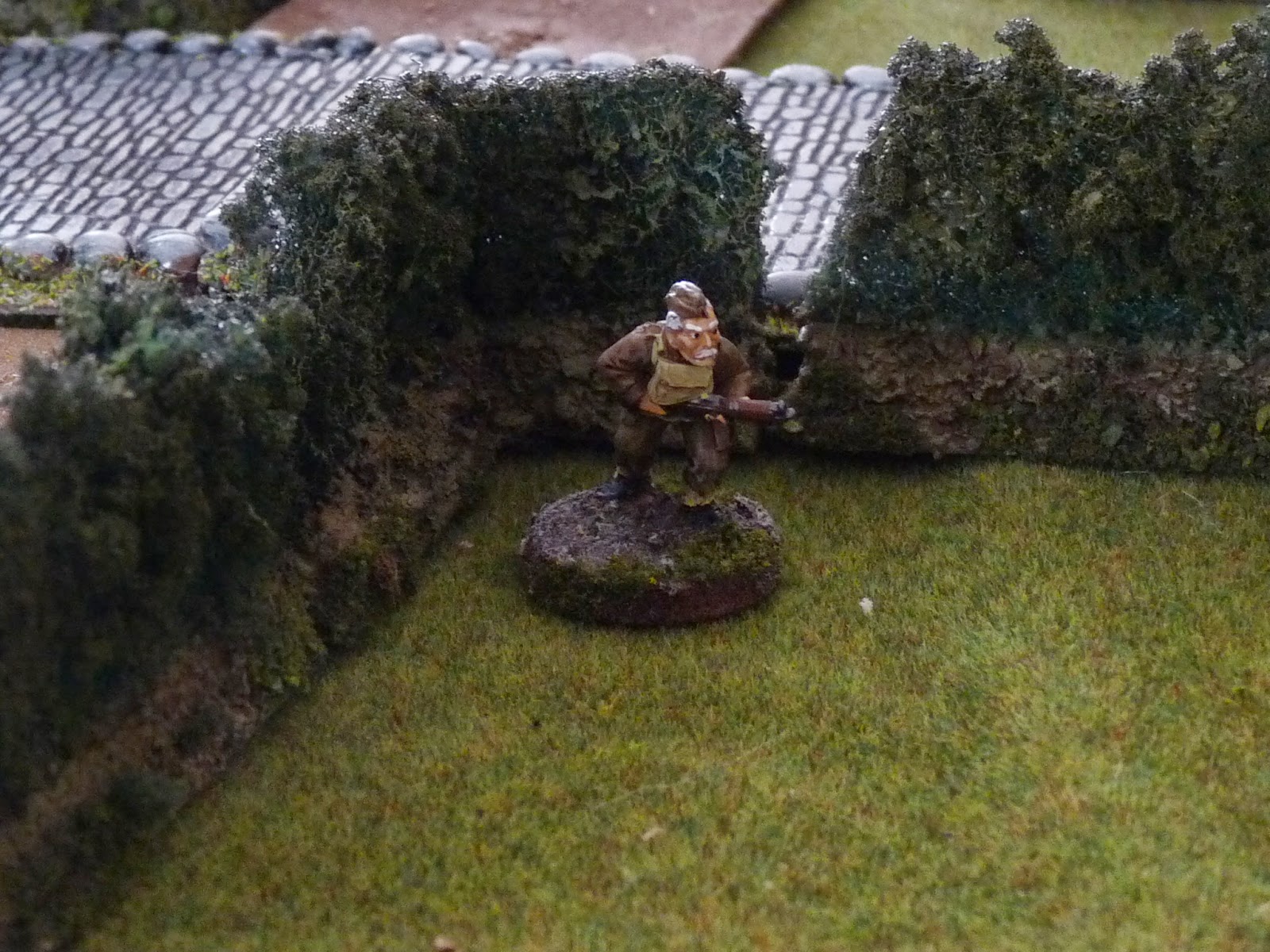 Design a wargame in an afternoon!

Over the last years I made quite a few demo games based in some way on a thrilling scene from a movie or a book. These make great participation games because they are very recognizable and even players without any wargaming experience easily connect to them.

Urged by some friends I finally decided to try my hands on a workshop aimed at designing such a game. So on a scorching hot Saturday we gathered in my FLGS Subcultures (whose subterranean abodes were pleasantly cool!) to see if we could create a playable wargame in just one afternoon.

I had decided on a scene from the -much maligned but nevertheless quite entertaining- movie King Arthur. The movie had a lot of "historical" pretensions most of which are quite silly but does have a few memorable scenes , the best of which is arguable the battle on the frozen lake below.

I picked the scene primarily because I liked it and always wanted to play it on a tabletop, but also because I owned suitable figures and the terrain was extremely simple. Just a frozen lake hemmed in between shorelines and cliffs. That way we could concentrate on designing the game without having to spend much time on building an elaborate table. 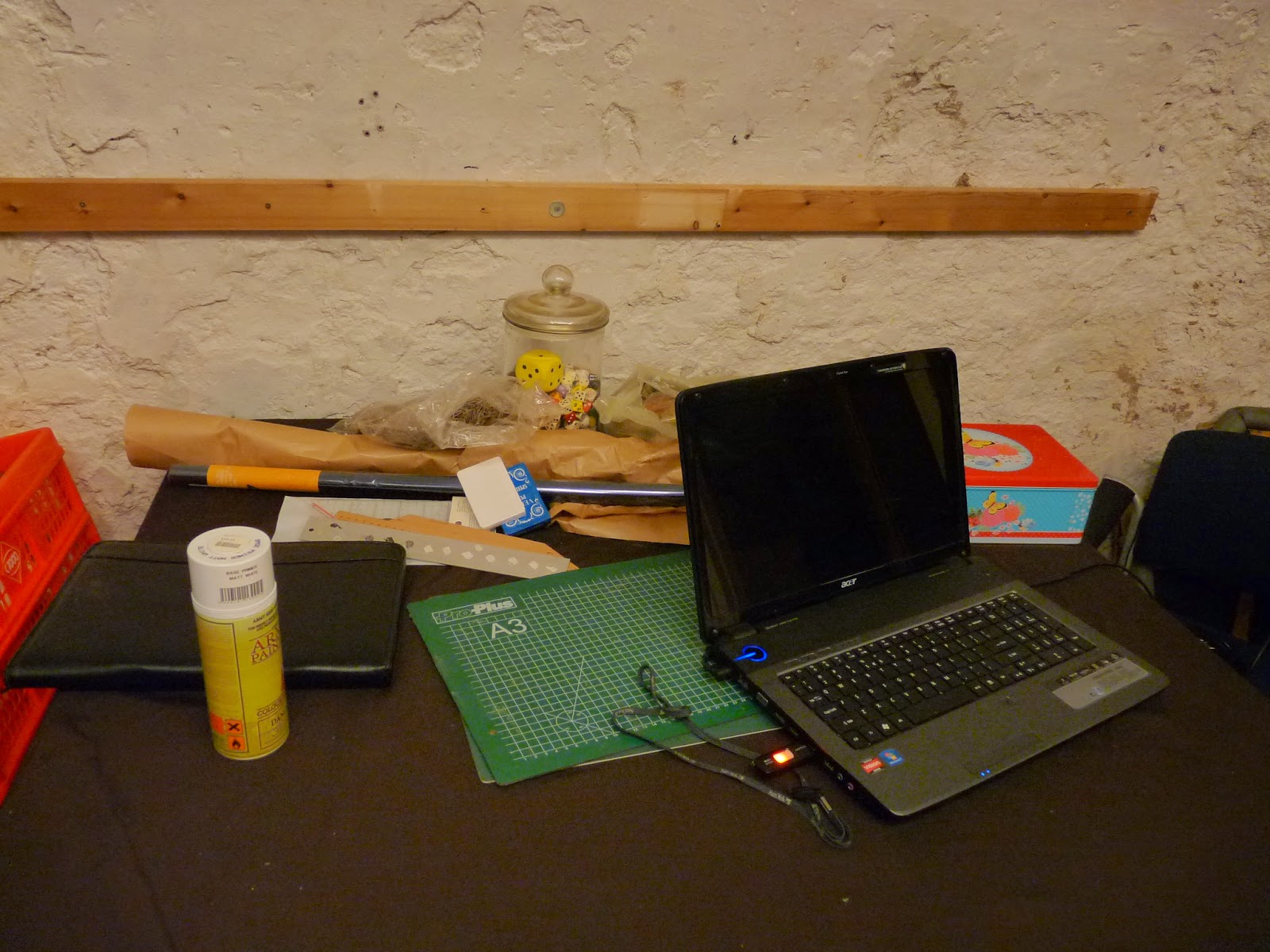 So we started out at 12:00 with some cardboard and other odds and ends to build the table and no idea whether or not this would work.

We started with watching the scene on a laptop and recording all the things that made the scene thrilling and exiting. Was it the suspense of the cracking ice, or the shooting? Or actually the great horde of Saxons so clearly outnumbering Arthur and Guinevere and his knights? Whatever the case, the things that struck us most would have to be incorporated in the rules.

Finally we agreed on a number of aspects that the game would have to have. The ice would have to be untrustworthy. The more people were on it, the more likely it would be that it collapsed. Arthur and his crew would have to be deadly shots just like in the movie. Saxons hit by arrows would cause their neighboring figures to cringe away from them, thus making it possible for the Arthur player to bunch them together on the ice. Saxons would have archers too. Ice could be damaged with axes and weakened in this way. Movement, shooting, fighting and command were all very straightforward. Knights hit on a 3+, Saxons on a 5+. Moves were 6+d6 and you had to move all the way because of the slippery ice. We decided on d6s for everything just to keep things simple. Limited command range would oblige the Saxon to keep his force together somewhat.

We divided the ice first in 20x20 (too big!) then in 15x15cm squares and gave them values. The more to the middle you moved, the weaker the ice became. The weakest ice square was 25. When figures stood on it, you had to roll below the difference of Ice value minus number of troops with 3d6. So 20 Saxons standing on a 30 point ice square would require a 9 or less to keep standing. 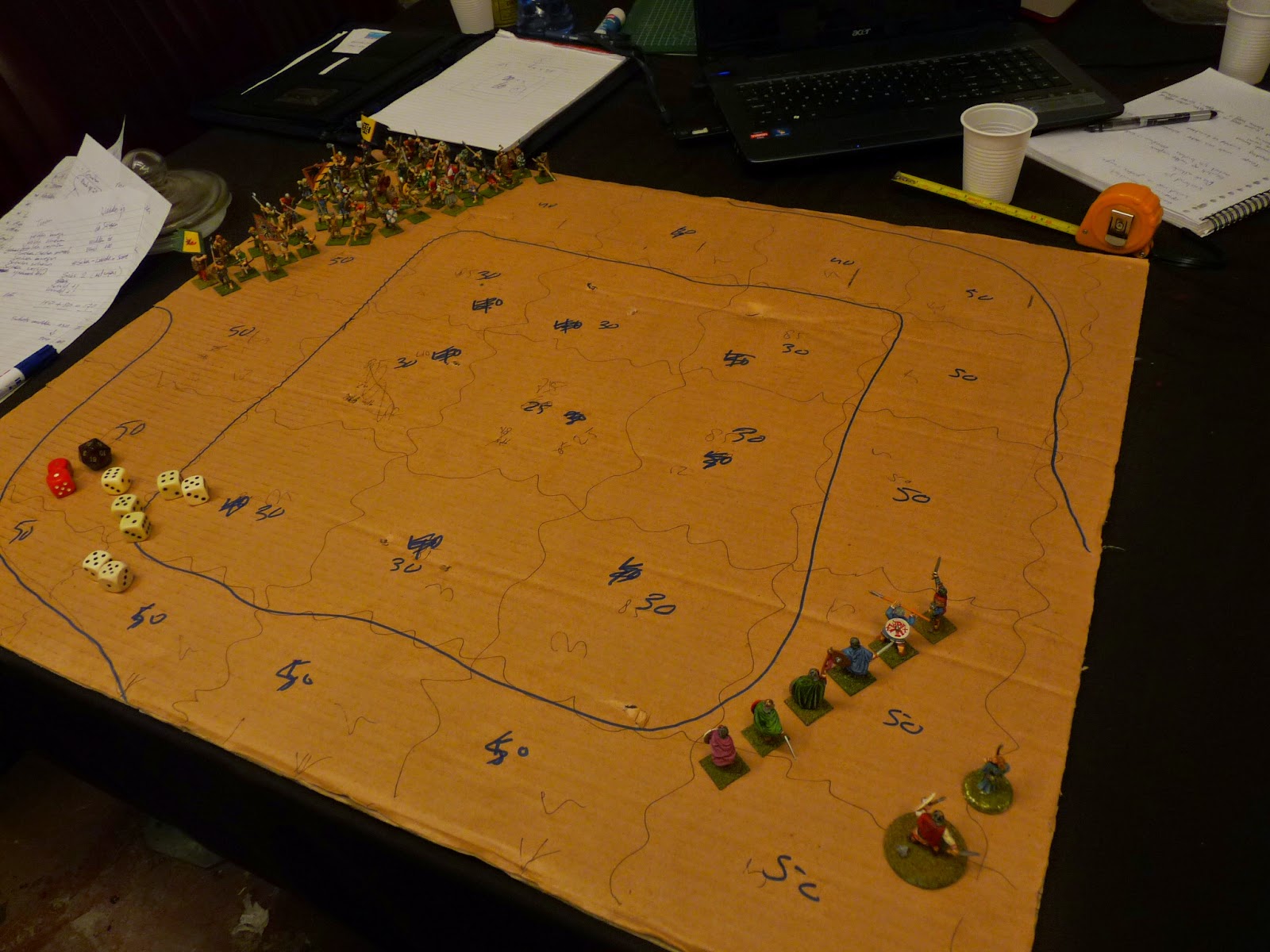 At this point, around 13:30, we built a first prototype of the table and played the first test. It was time to kill our darlings, as this is the time when you discover which of your fancy ideas actually work! If it doesn't, it will have to go! Here we changed the playing sequence to: 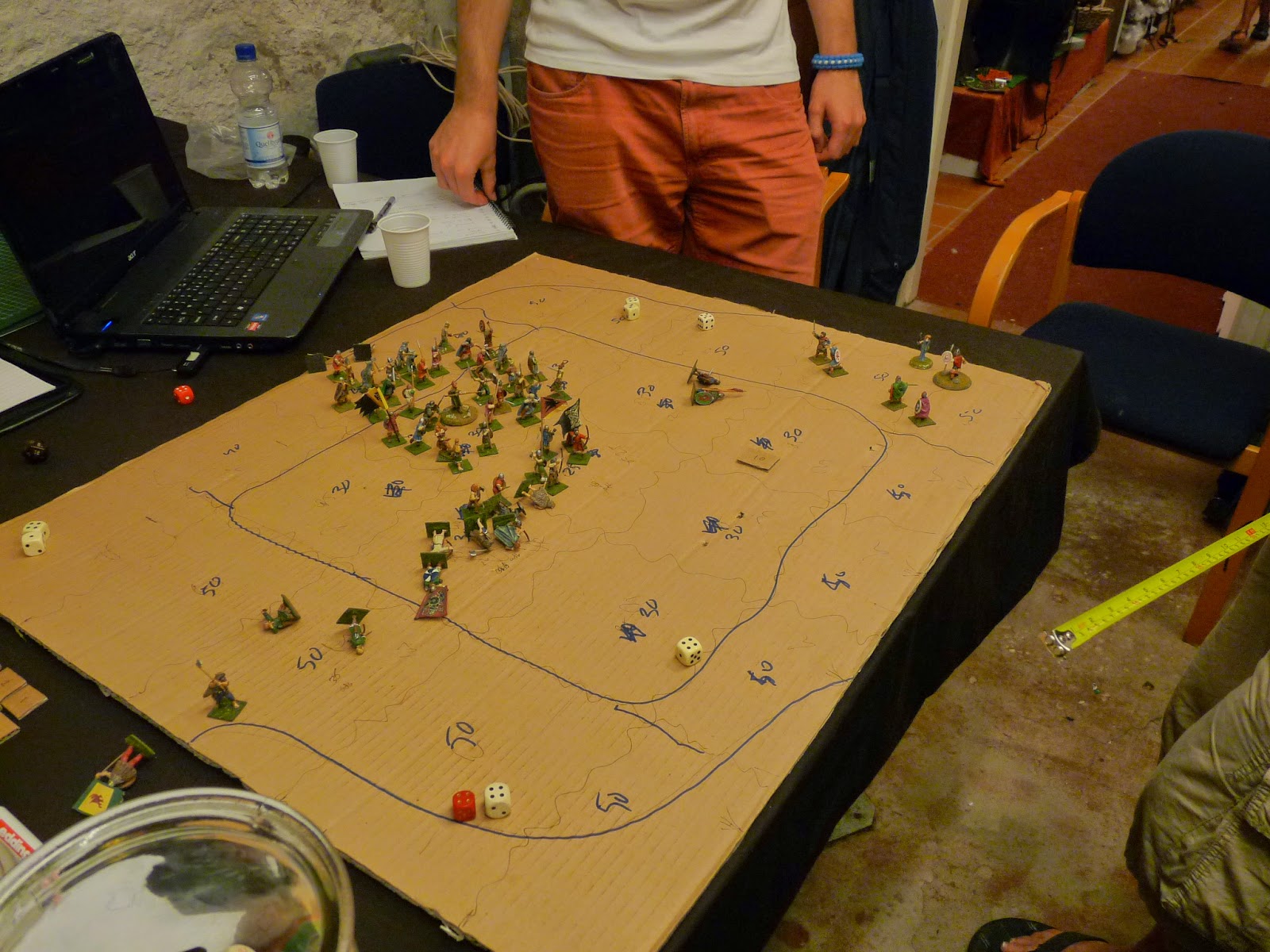 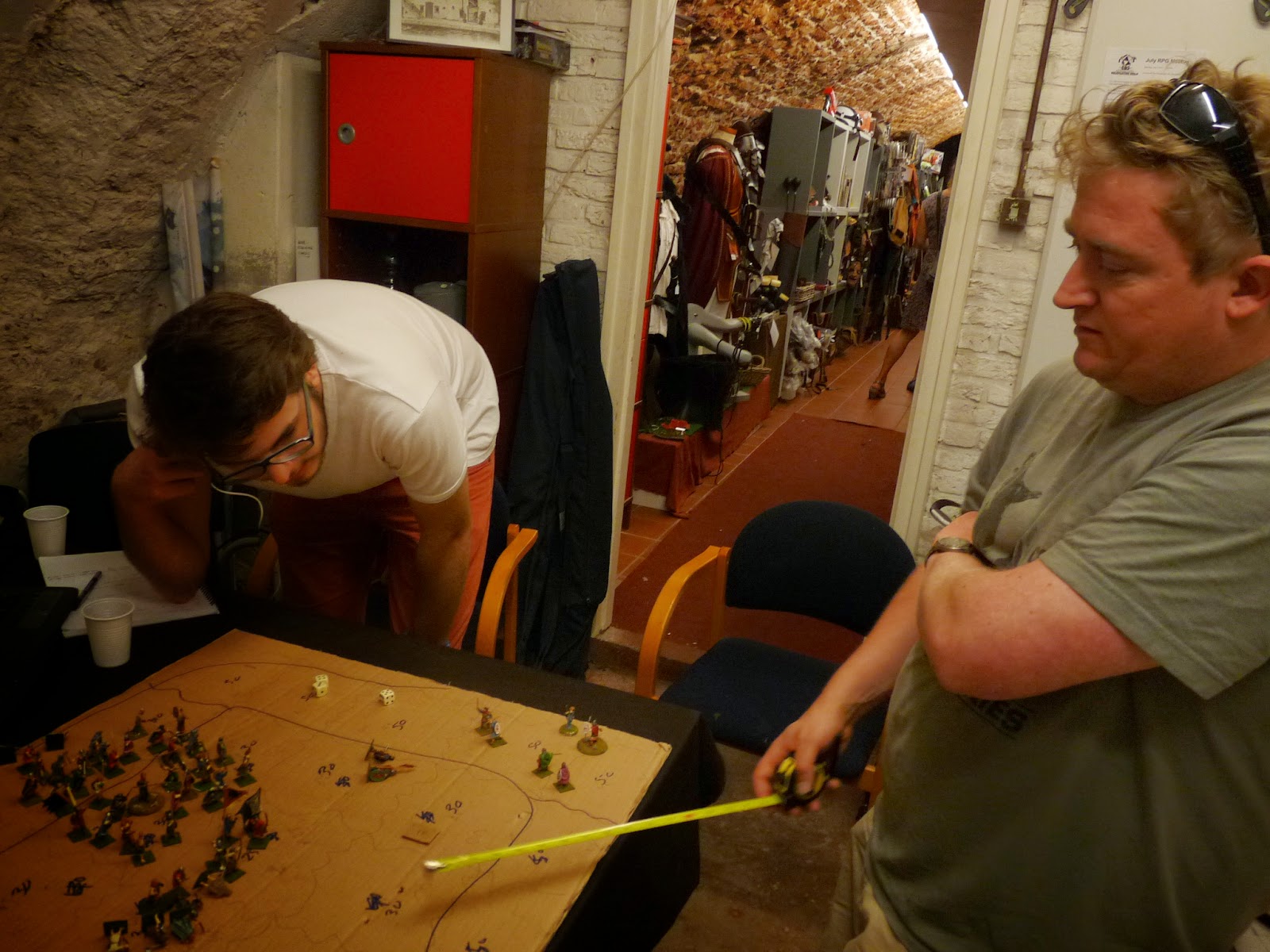 Other minor adaptations were made. For example, we originally used different weights for heavily and less heavily armed troops, but it was too cumbersome and required too much counting and calculating. Out it went! 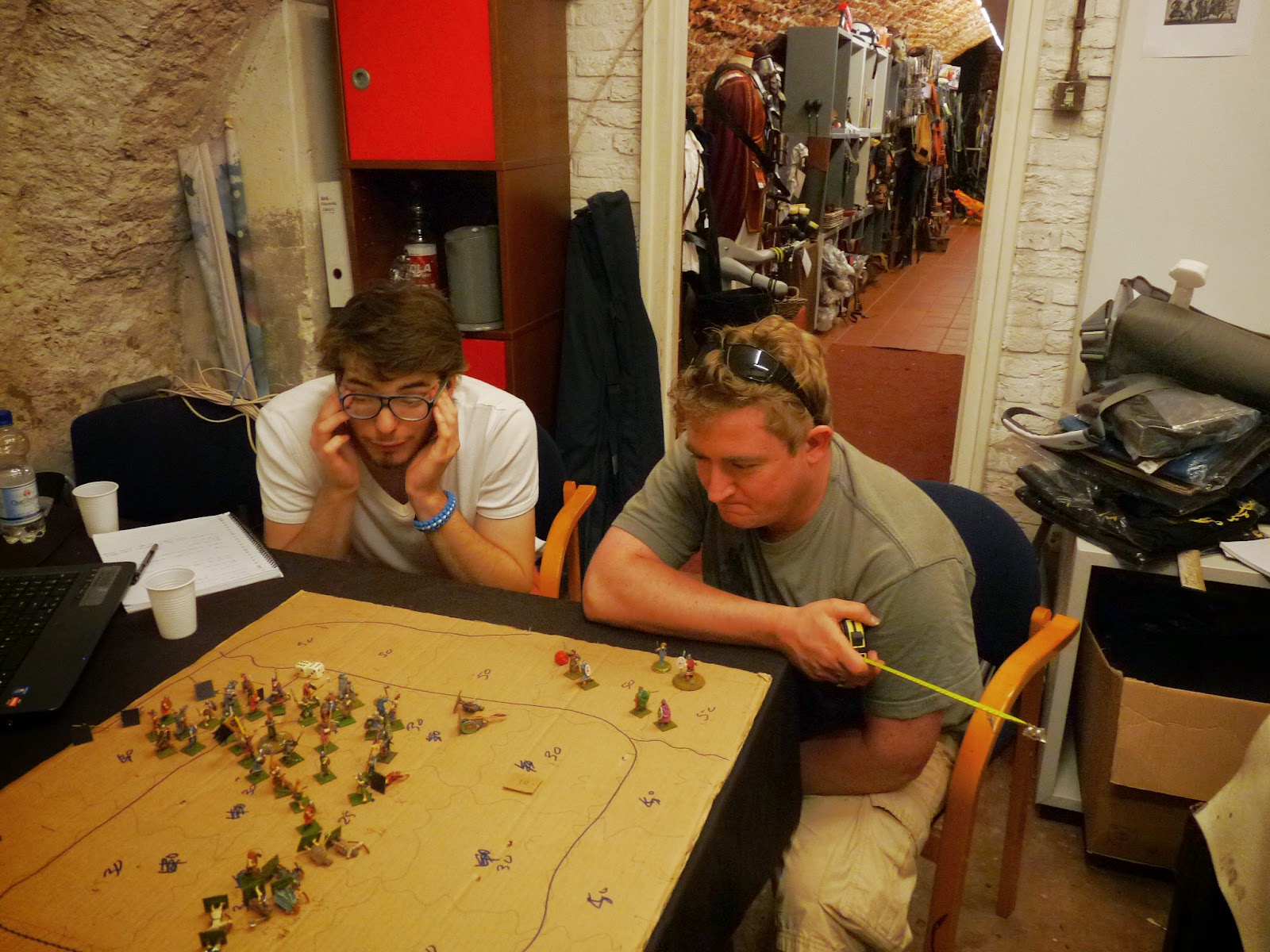 There was much pondering and discussion and we quickly started a second test to try out the innovations. Now the game ran much better, more fluent and with great suspense. We discovered that hacking on the ice to weaken it was a viable, but dangerous tactic for Arthur.

There was discussion whether the ice was too strong or not, but with Arthur going at it with axes, the chance to break it was still quite real.

Playing time was about an hour, so that was good.

So after the second test we decided to Beta-test it! We built a new table that looked a bit better and invited two people from the shop to play. So at 16:00 hours we had our first real game! 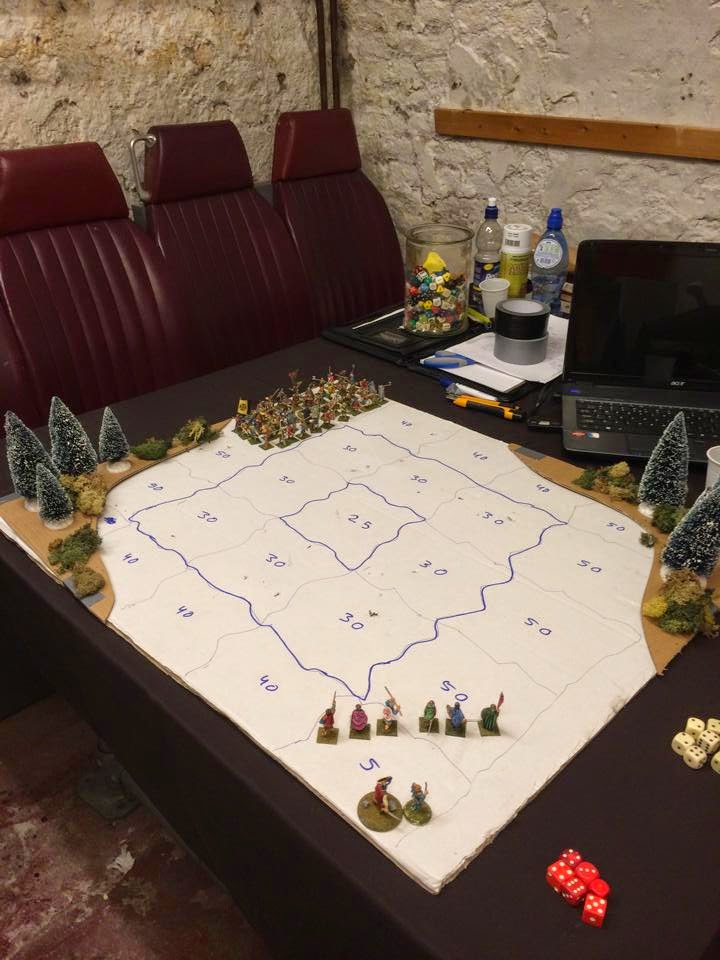 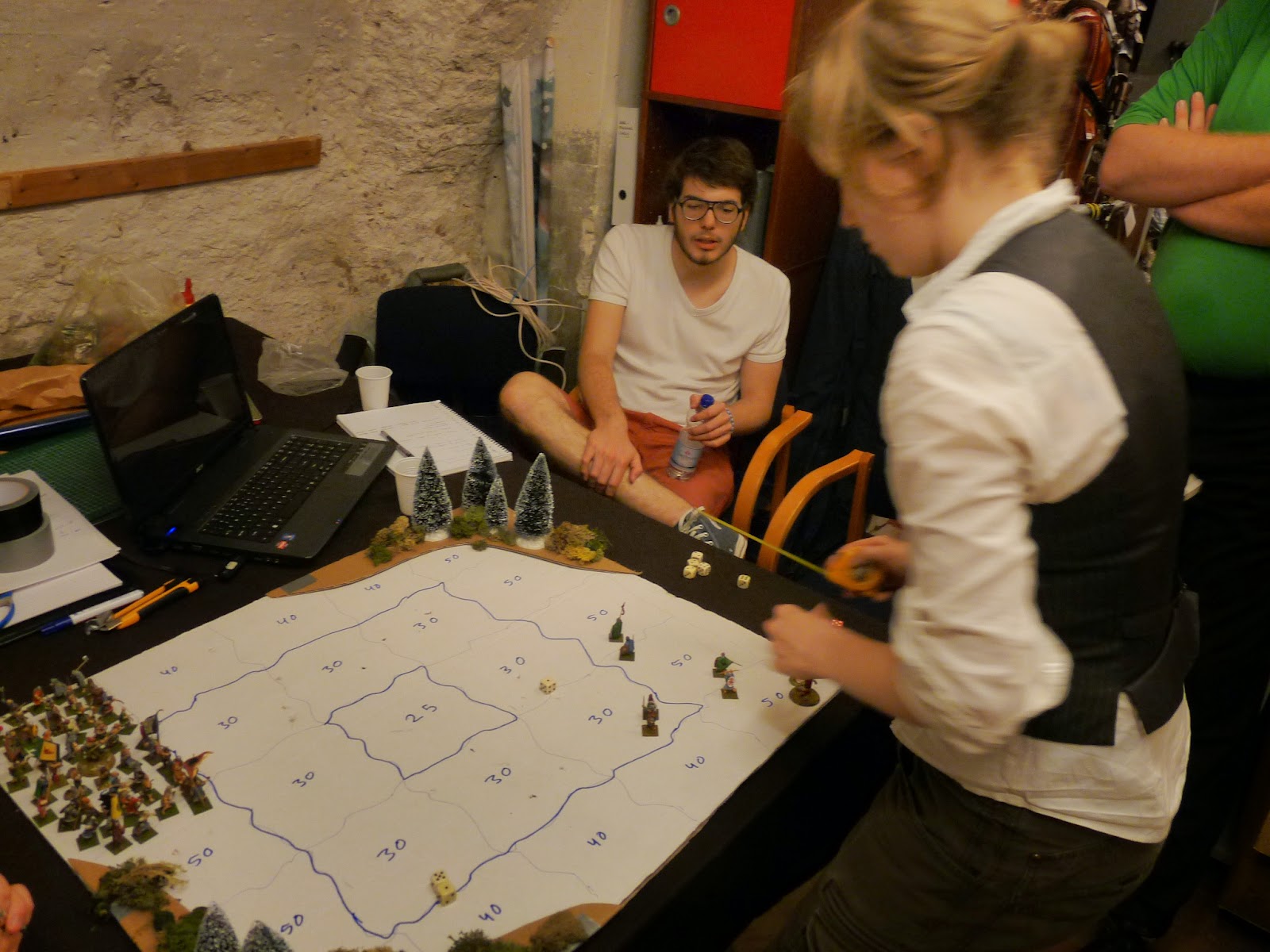 The players went at it with a vengeance. The Saxon player decided to split her force to reduce pressure on the ice and trusted on the dice to get her troops forward.

The Arthurian player adopted the tactic of shooting the Saxon archers as much as possible with her two long-range bows and using her other knights to weaken the ice. 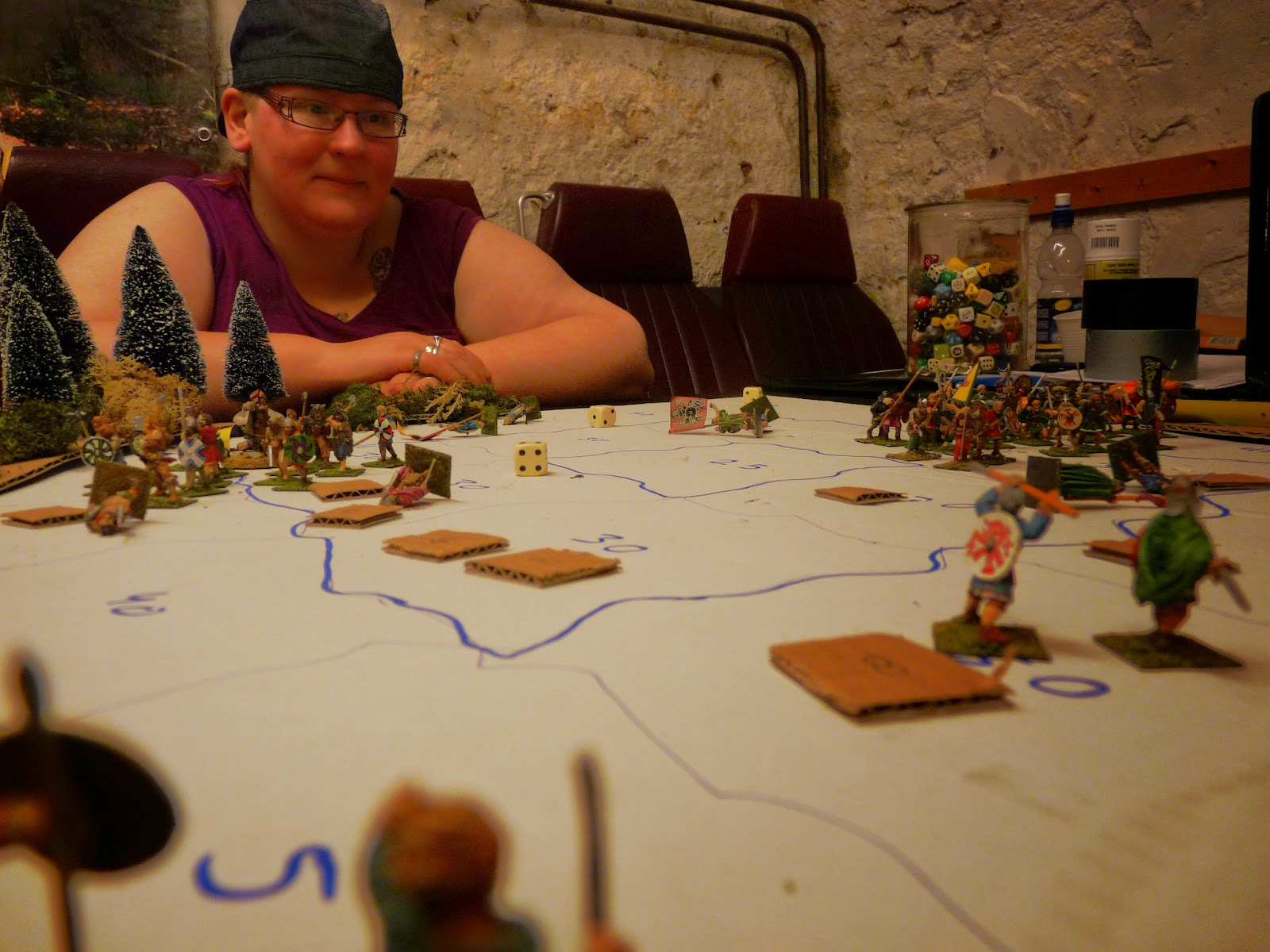 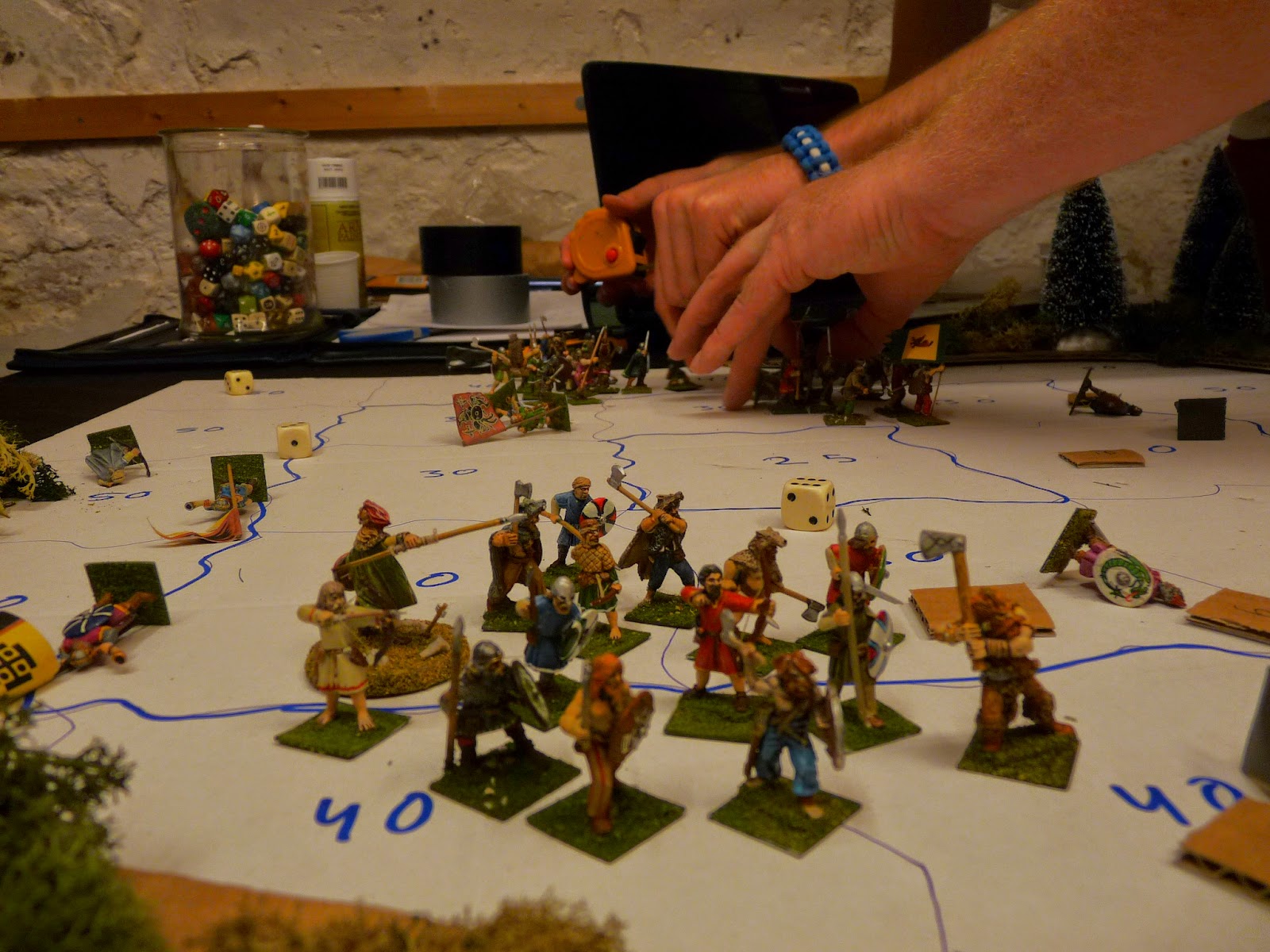 It turned out to be a surprising and still exiting game! The Saxon player rolled incredible command rolls so her troops managed to cross the ice even while split up. Arthur severely weakened the ice en-route but lost most of his men to Saxon arrows. Mid-game 10 Saxons went through the ice and died, but the rest managed to get through.

In the end even Guinevere succumbed to Saxon arrows and Arthur decided on a final gamble. He threw himself forward and attacked the ice square on which the Saxon leader was standing. With a mighty blow from Excalibur the ice cracked and Arthur, the Saxon leader and all Saxons on the square went into the deep!

Just one, leaderless group of Saxons remained. Would they -hesitant and unsure as they were- be able to overtake the refugees? Who knows? Maybe this was the time to invent a rule about a draw?

It was great to do this. Producing a playable game in an afternoon was a great ambition and it was marvelous to see it succeeding!

Of course this isn't a full wargame and was only made possible by the limited scope we adopted but  it was a fine achievement nonetheless! Even the final game yielded suggestions for improvement: less sturdy ice, random ice strengths and ice strengths hidden below overturned counters that only reveal the true strength of the ice when you have to test it for breaking.

We could also really go on a roll in making the table. Plastic ice squares that can be lifted off the table, revealing black water below, cliffs and shoreline lining the lake, winter style basing for the figures et cetera all make this table much better looking and would actually make a great participation game! Who knows? One of us might still build it one day....

Many, many thanks to Tim, Niels, and Edwin without whose enthusiastic and open-minded involvement this would never have been possible, to Edwin's Lady and Nicky for playtesting and of course to Subcultures for hosting us in the first place!
Geplaatst door Pijlie op 8:39 AM 3 comments: