The most Ancient period of wargaming: Pre-historic! part 1

Every once in a while I get the itch to try out something new, something Original that I haven't seen around much. After watching an excellent 2-part documentary about the Neanterthal Man I decided to go for Pre-historic wargaming, if the term wargaming can be used in that context. 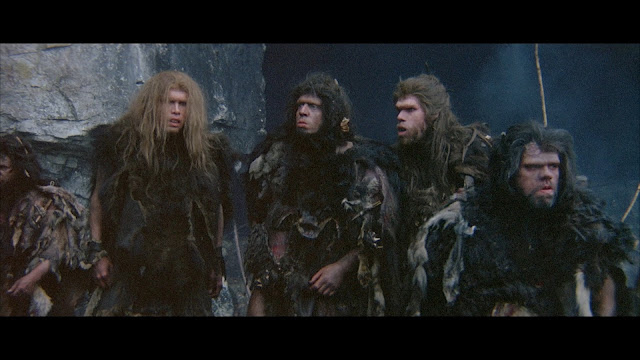 Because of course during the bigger part of the existence of prehistoric Man there were no such things as wars. Defining the period as starting at about 400.000 BC when Homo Neanderthalensis entered Europe and Asia from out of Africa until about 10.000 BC when Homo Sapiens had firmly eshtablished himself as the dominant species across most of the planet, most of Man's societies were small groups of nomadic hunter-gatherers that propably only met at seasonal meetings or at the off-chance coincidental meeting while roving their hunting grounds.

This might have led to armed conflict as often as not, but it feels a bit of a stretch to call these small skirmishes "wars".

So encounters in this period that can be played as a conflict should mostly be hunts and coincidental scuffles between small groups of hunters for the posession of a prey or cave or something.

Da Moddelz
It does take some searching, but there appear to be quite a large number of miniatures available, if only from a rather wide number of manufacturers. No one makes a omplete range of prehistoric figures. This should not surprise anyone, since PH is a very small niche in an already niche hobby.

Nevertheless the ranges are quite complete. Generic prehistoric people, branded as "cavemen", "prehistoric people", Cro-magnon or Neanderthal are and were made and sold by several companies.

First worth mentioning is DeeZee which has some Neanderthals and a lot of contemporary animals, which of course make up the larger part of PH figures. I bought most of my animals here.

Lucid Eye has lovely Neanderthals and Cro Magnon (modern Homo Sapiens) that were my eventual choice for the humans.

Steve Barber Models has prehistoric people as well as animals and produces the ruleset Prehistoric Settlement for which they make figure packs. Their Smilodon and Megaloceros were added to my collection.

Acheson Creations has quite a range of animals. But since they are transatlantic for me, the shipping costs stopped me there. They have lovely figures though.

Rattrap Miniatures has a few animals in their Pulp range.

Toy brands Schleich, Safari and Papo make plastic prepainted prehistoric animals. Most are too large to use with 28mm but the giant sloth from Safari came in several sizes in real life and may pass for the biggest species. The Papo Komodo dragon is way too large for 28mm but perfect for prehistoric monitor lizard Megalania.

I aimed for contemporary animals that were actrually encountered by prehistoric Man. So I skipped any dinosaurs or Terror birds however tempting it was to add them to the game. I might succumb yet....

More pictures of painted figures and games are to follow.

Da Rulez
Completely a secondary priority in my book, I only started researching rulesets after purchasing the miniatures. Several sets came along and I purchased three: Tusk, Paleo Diet and Adventures in the Lost Land. I borrowed Prehistoric Settlement from a friend.

In the coming months all sets will be tested and reviewed. Paleo Diet looks the most promising at first glance, but the proof of the Mammoth is in the eating :)