The making of The Raid: how a scenario is born.. Part 3: The Building

On with the show. Now the scenario and rules have taken shape, further building can continue!

Roofs will be detachable. Doors and gates must be able to open and close. The buildings must allow for a lot of cover, given the lethality of missiles in the Ronin rules. And where would a ninja sneak if there is nothing to hide behind? 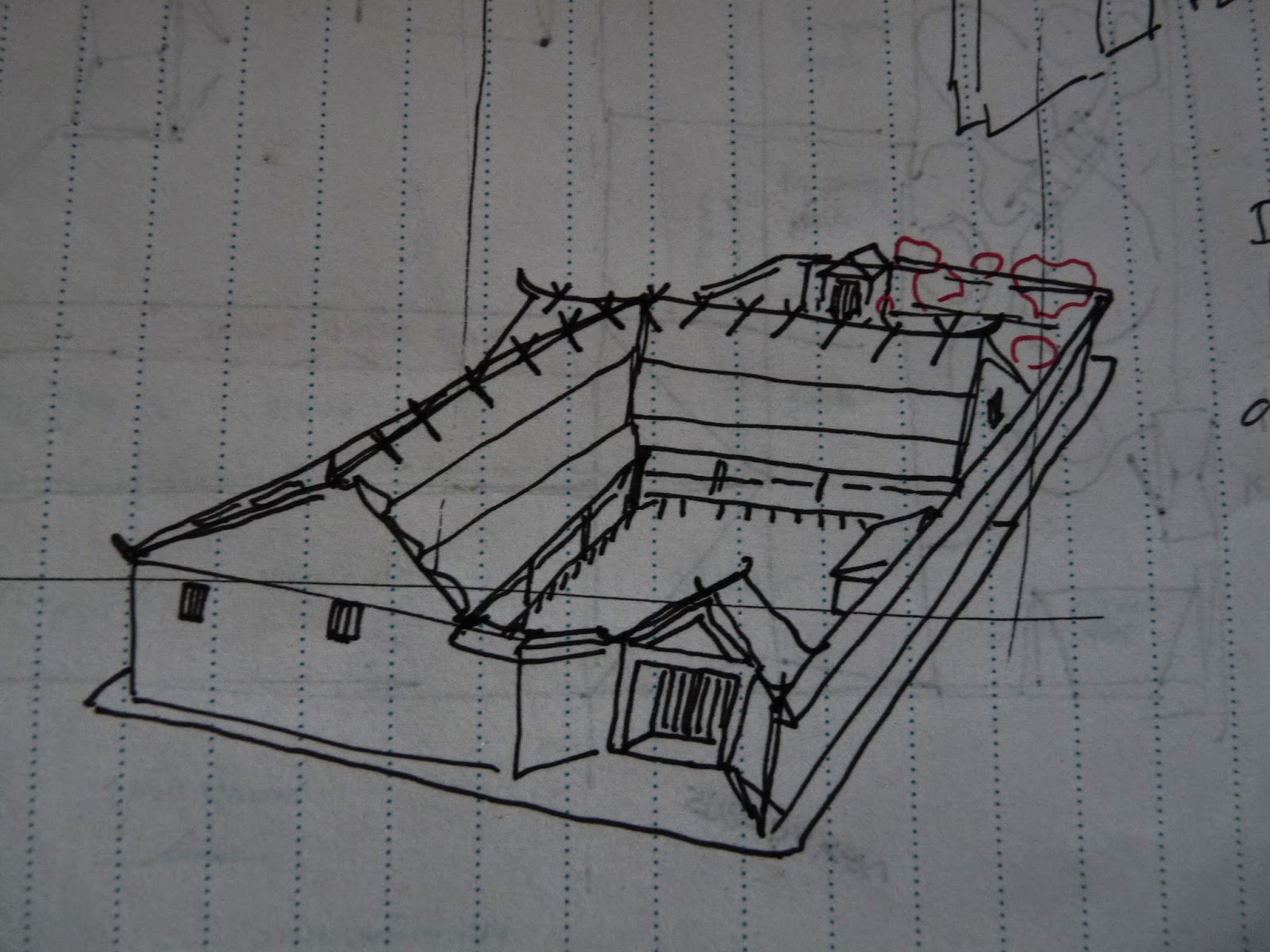 As usual I made some sketches for the design. No blueprints, just an impression to guide me during the building process. 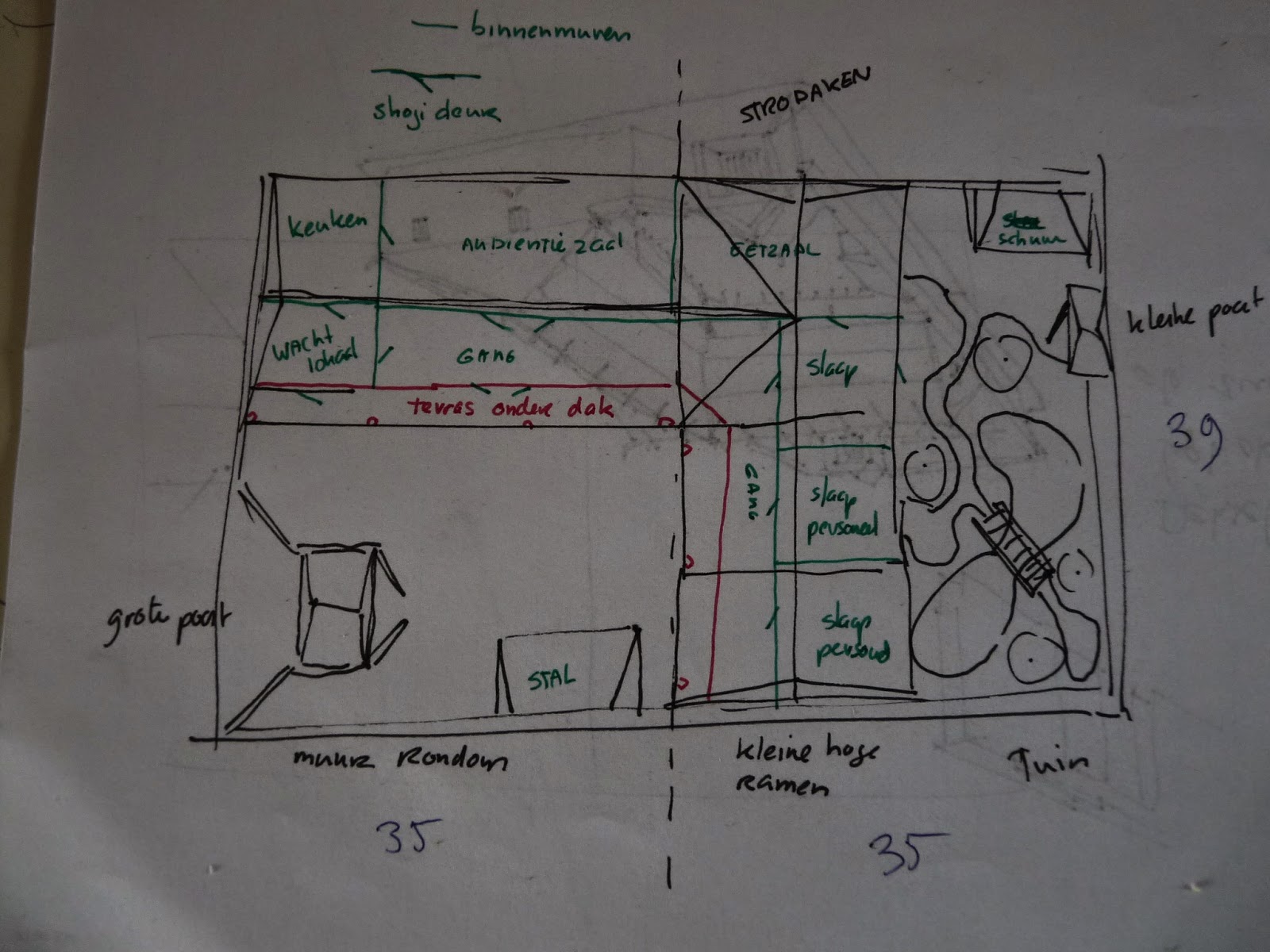 The building should look distinctly Japanese. This calls for a maximum of clichés and the watching of some samurai movies while making a list: shoji doors, tatami floor coverings, cherry blossom trees in a Zen garden, a little arched bridge, curved roof ornaments and Buddha statues in some of the rooms. A Chinese food-and-novelty shop proved a treasure trove!

The building was undertaken in my proven fashion. Sturdy foamboard outer walls with small windows detailed with balsa and basewood timber would hold the roof made of cardboard. 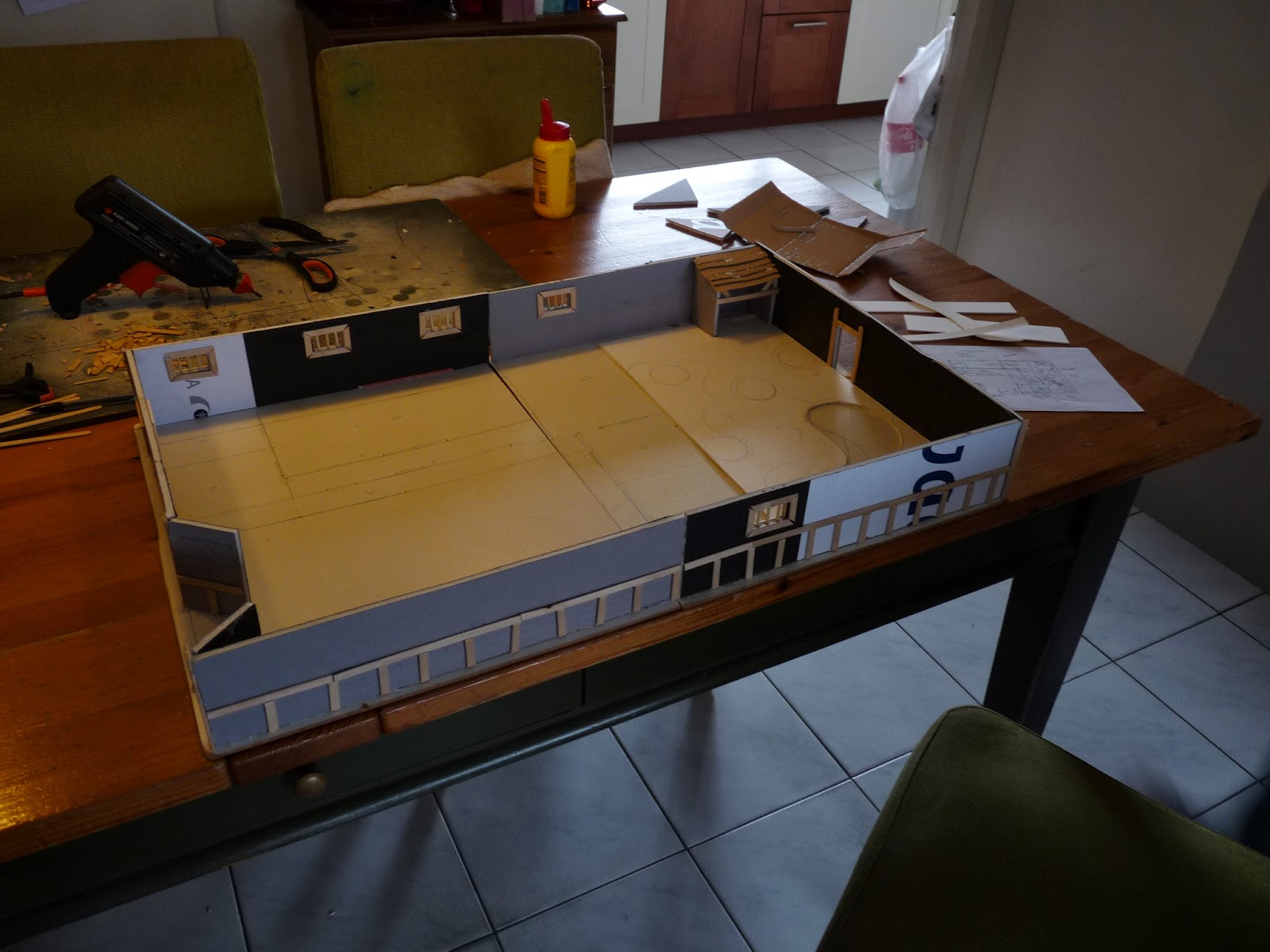 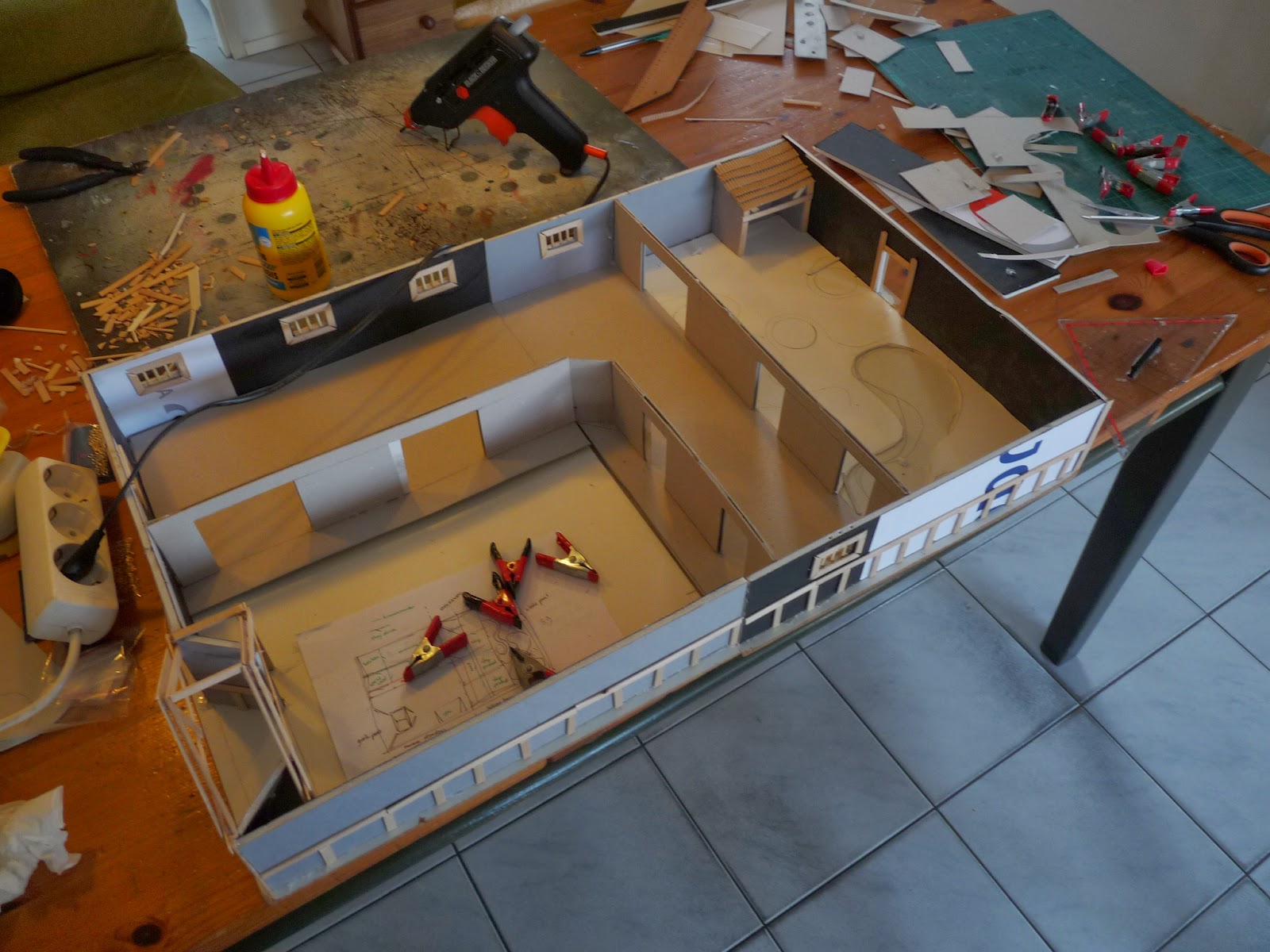 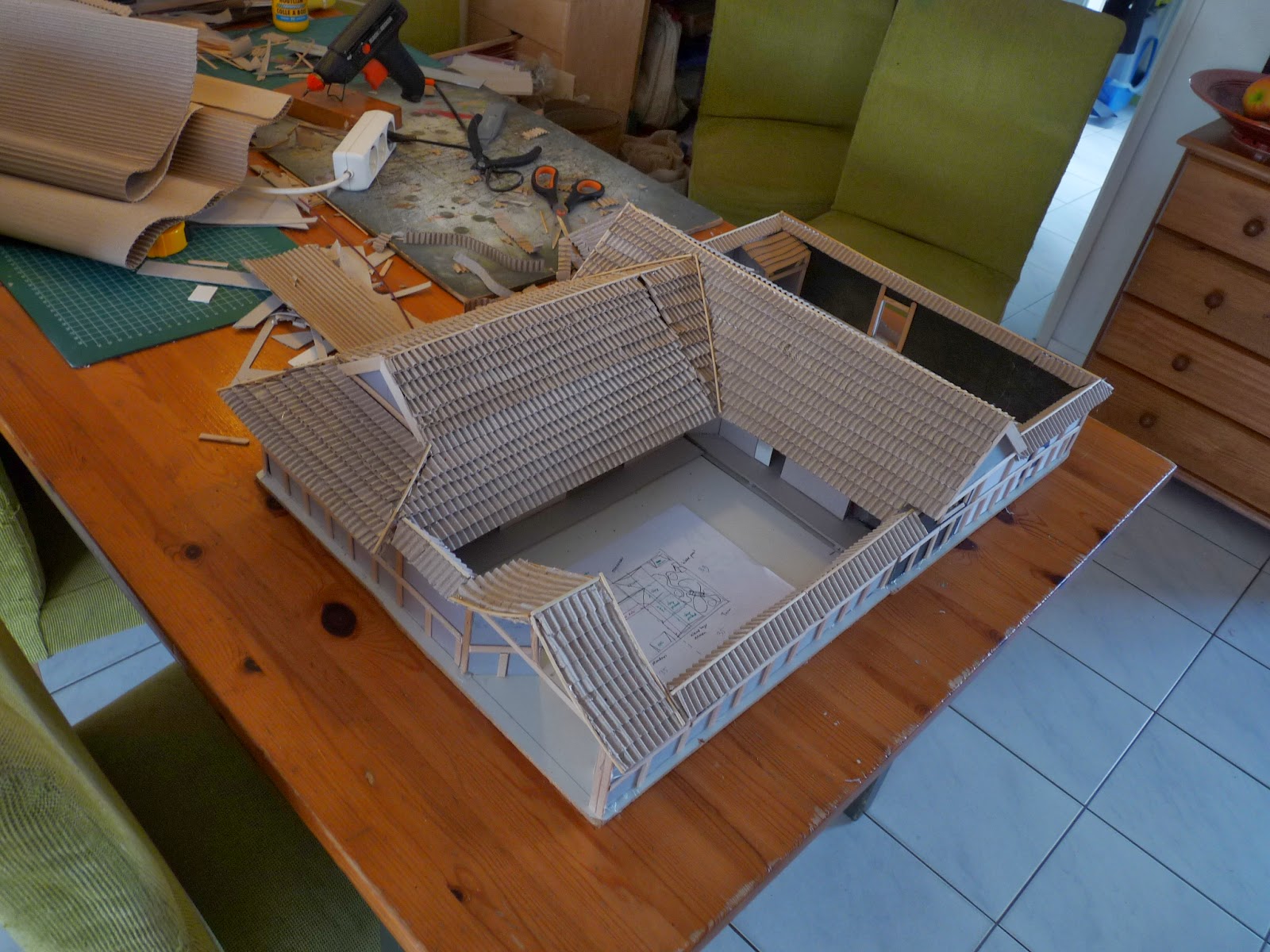 I decided on rooftiles instead of thatch: the owner of the manor is supposed to be rich and powerful enough to warrant assassination after all! There are lots of expensive and laborious ways to make rooftiles but being a stingy and lazy peasant I chose corrugated cardboard, cut in strips and glued in layers overlapping each other. Once painted this is remarkably effective. The top of the outer wall would be likewise tiled. 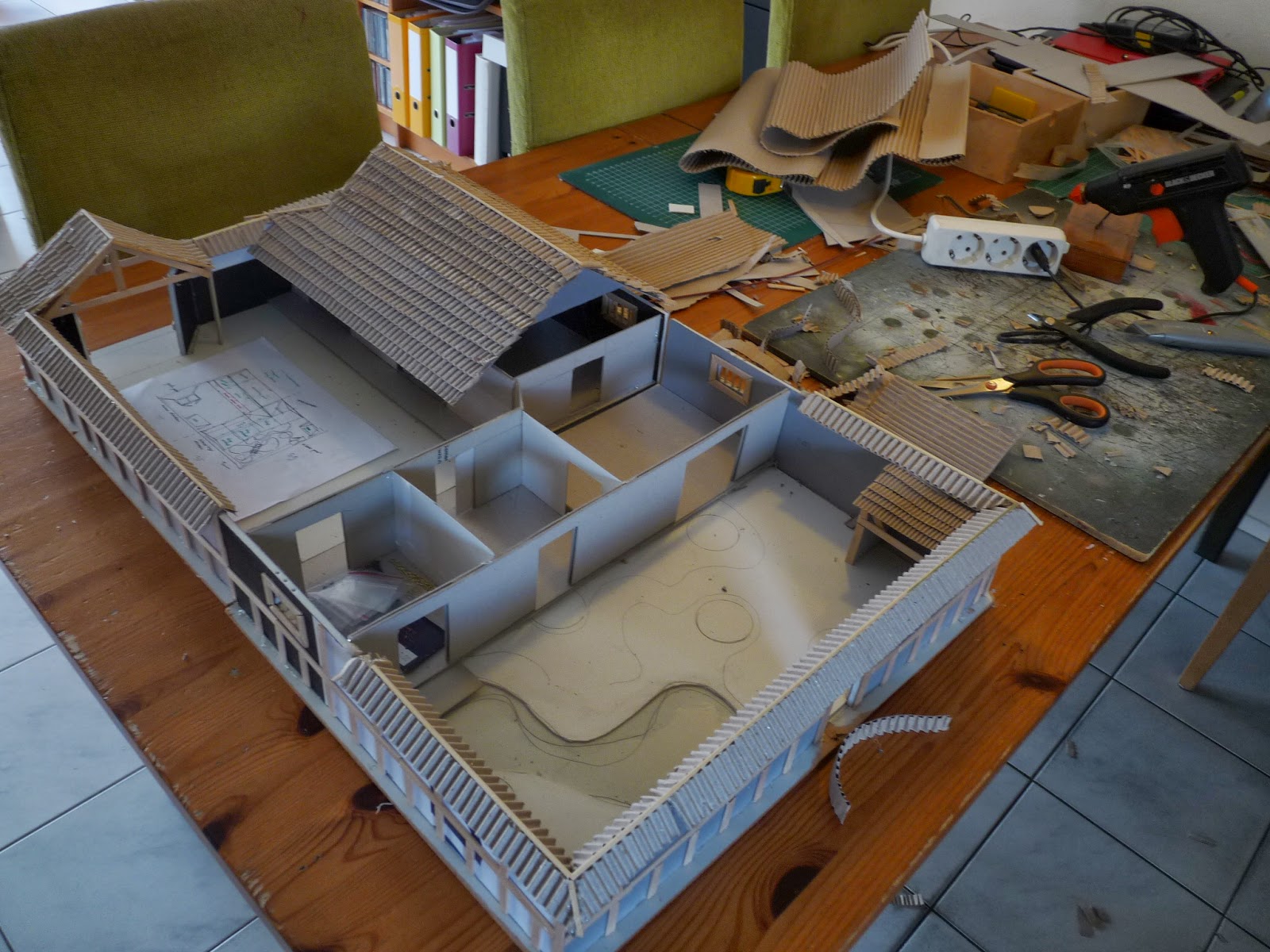 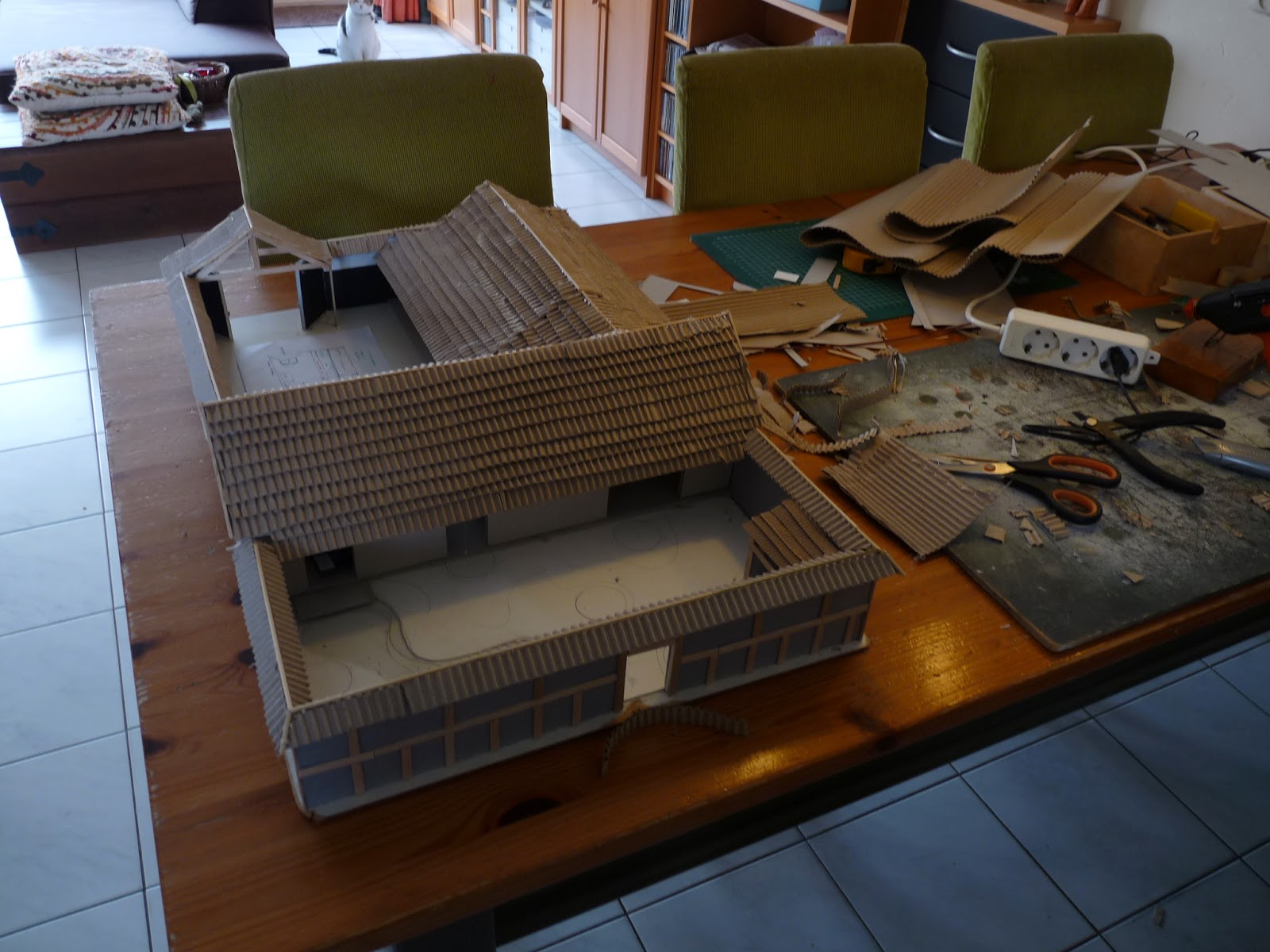 Interior walls will have to be double-walled to enable the sliding shoji doors to move into the walls. All interior doors and doors opening into the courtyard and garden have to follow this pattern. As shoji doors are relatively easy to break through, opening them would signify a broken or opened door, needed to either look or walk into a room. The doors are made from plasticard, as they would have to be moved around a lot and need to be resistant to friction and sliding. 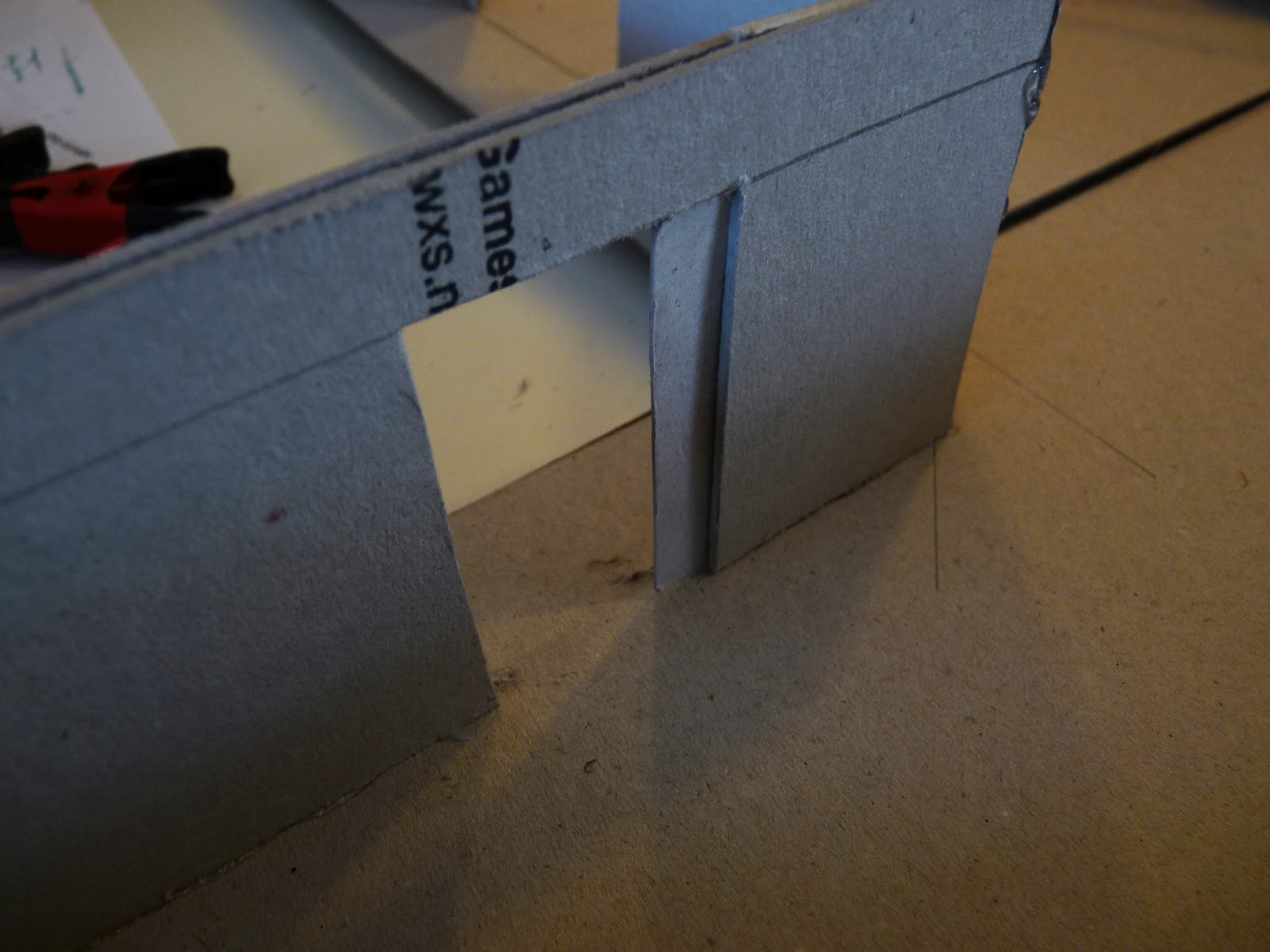 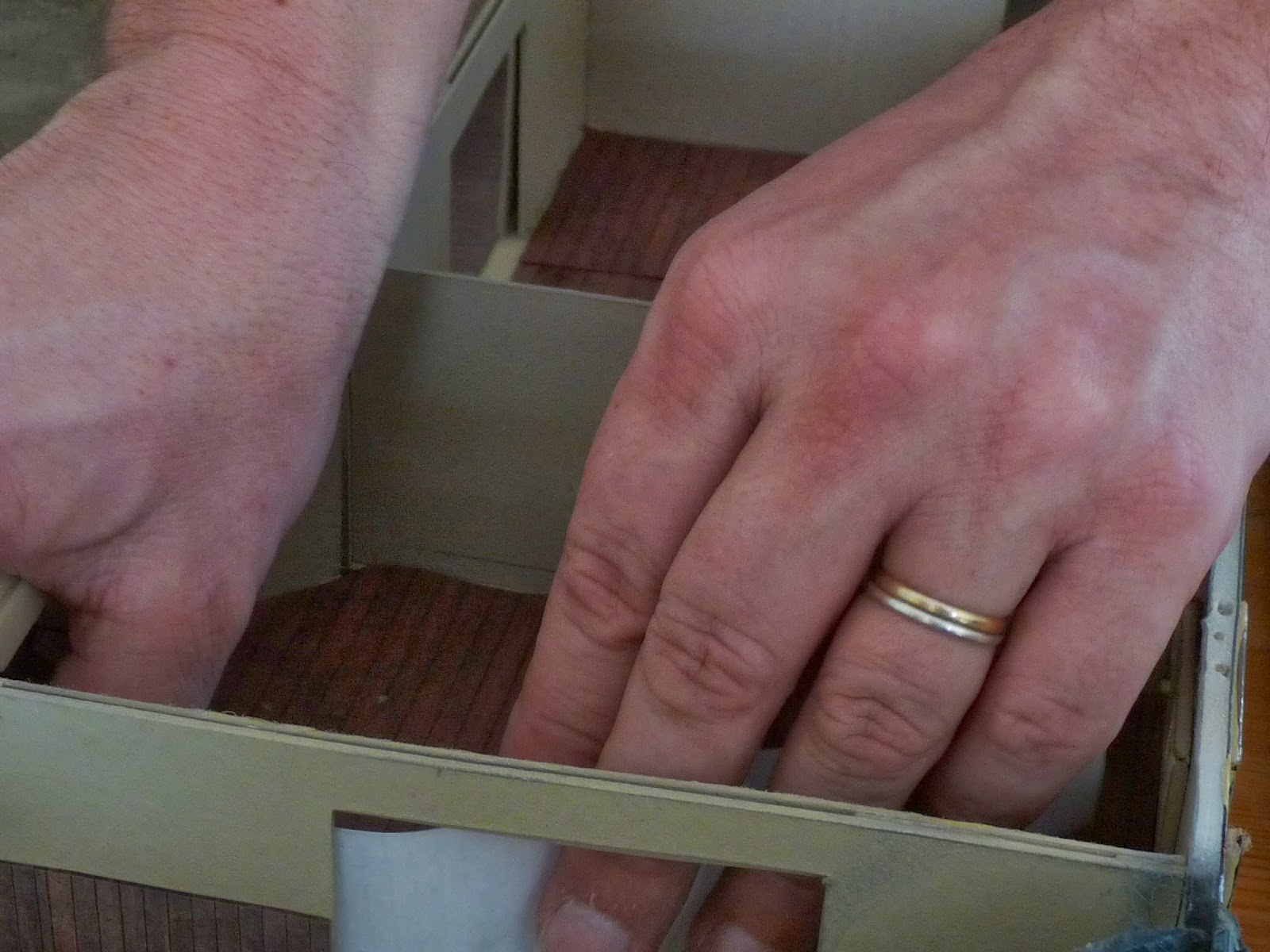 I make extensive use of printed paper to decorate the rooms and walls. Wall panneling, floor planks and stuff like paintings and screens are all googled, printed and glued. Be aware that the usual printer paper is too thin to take glue well (see the regrettable result on the floor in the picture below) so take thick paper to print on when you have to glue large surfaces like floors. 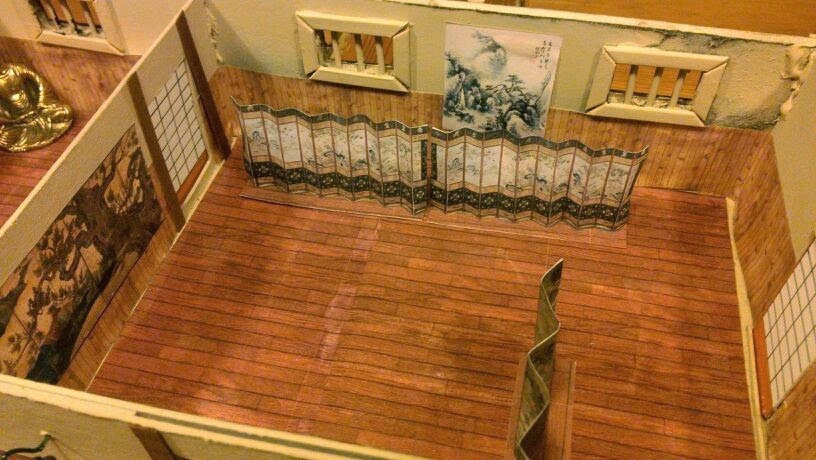 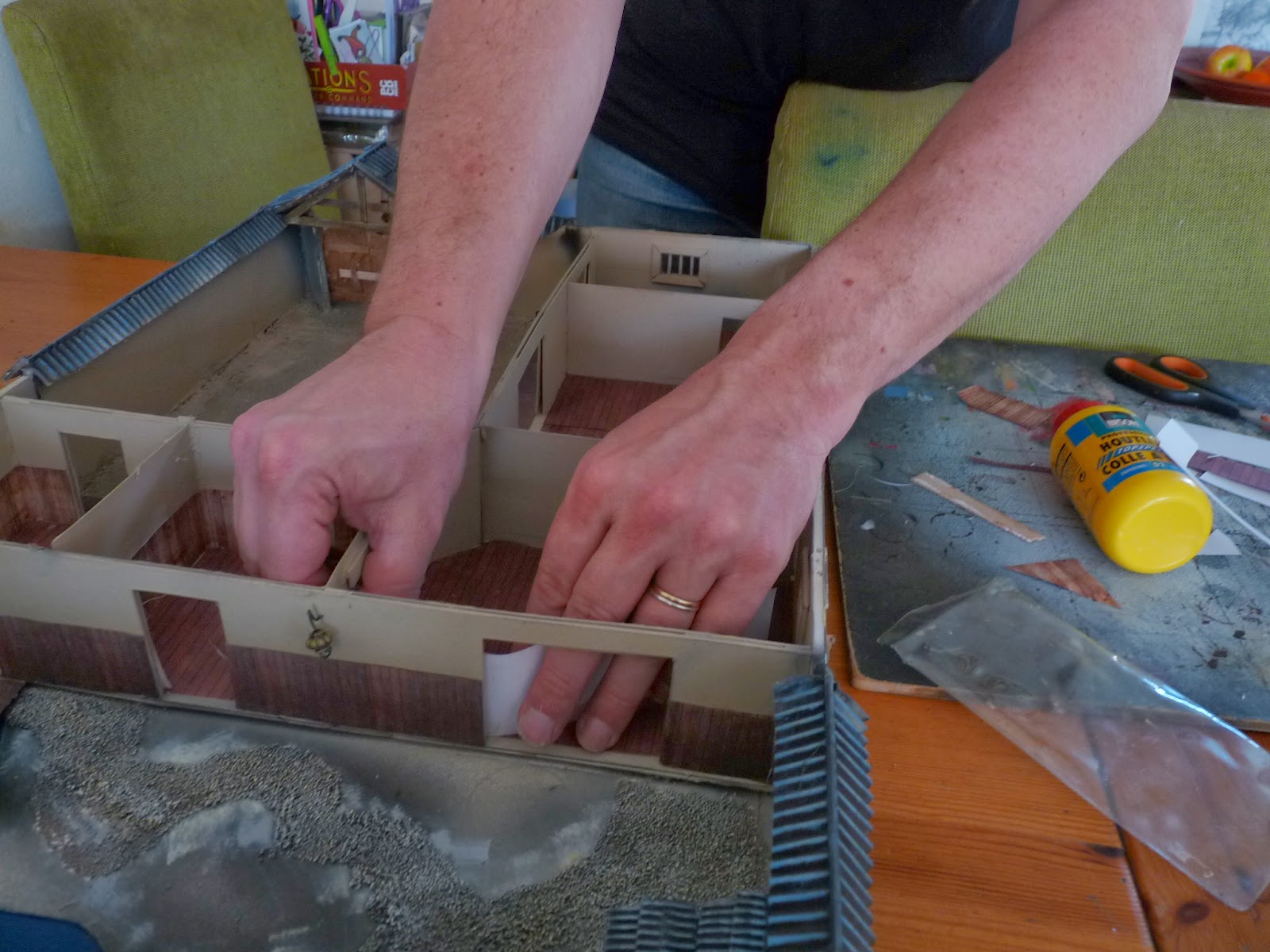 Rooms get foamboard lids resting on the interior walls to prevent the attacker (and up to a point the defender) from finding out what is in them too soon.

Wooden gates and exterior doors, reinforced to enhance the fortified nature of the manor, are made of glued basewood (praise the Heavens for coffee stirrers!) and move on dollhouse hinges.The same technique is applied to the double front gate and the rear garden door.

The garden presented me with a challenge in that it would need a pond. So different ground levels were built using thick cardboard and construction paste. The garden would then lay higher than the courtyard, but as these two spaces are separated by one wing of the manor this is not disturbing. Grass would be flocked around the pond, cherry trees fit into the garden (and can be replaced with bare winter trees) and fine gravel is glued onto the paths in (hopefully very Zen-like) patterns. The roof gets some simple ornaments. The building is then painted. I try to use as much cheap acryls as possible. 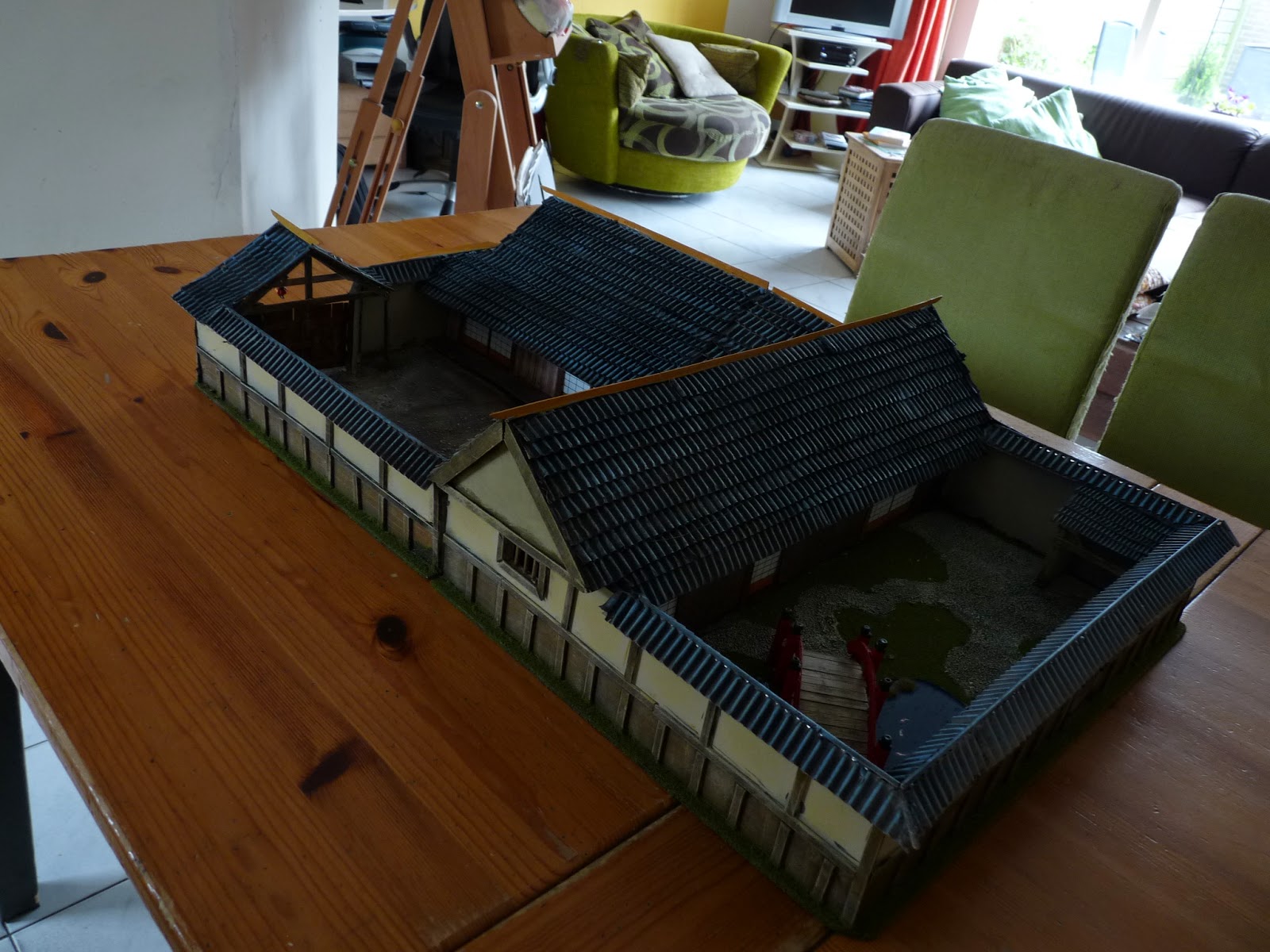 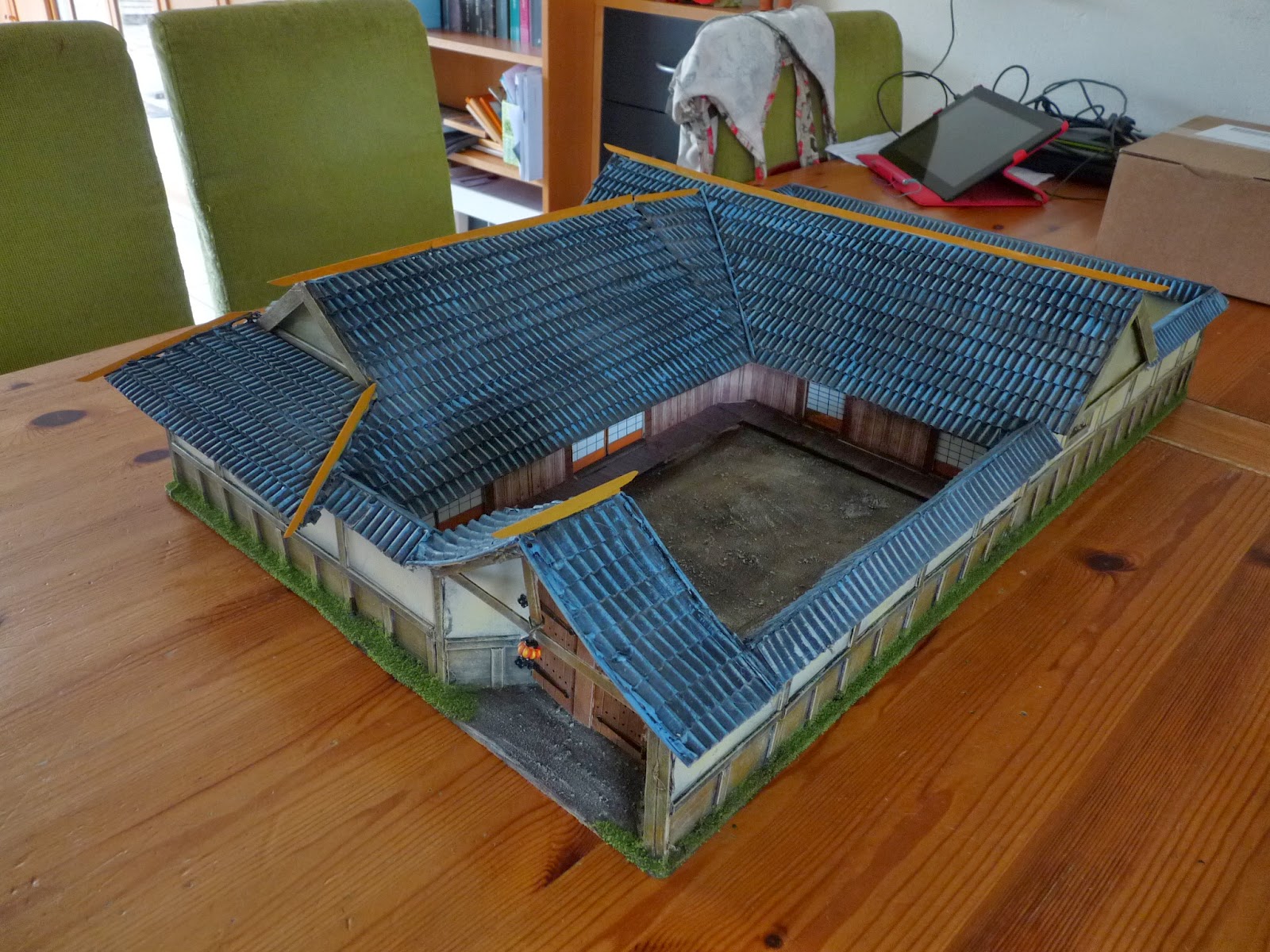 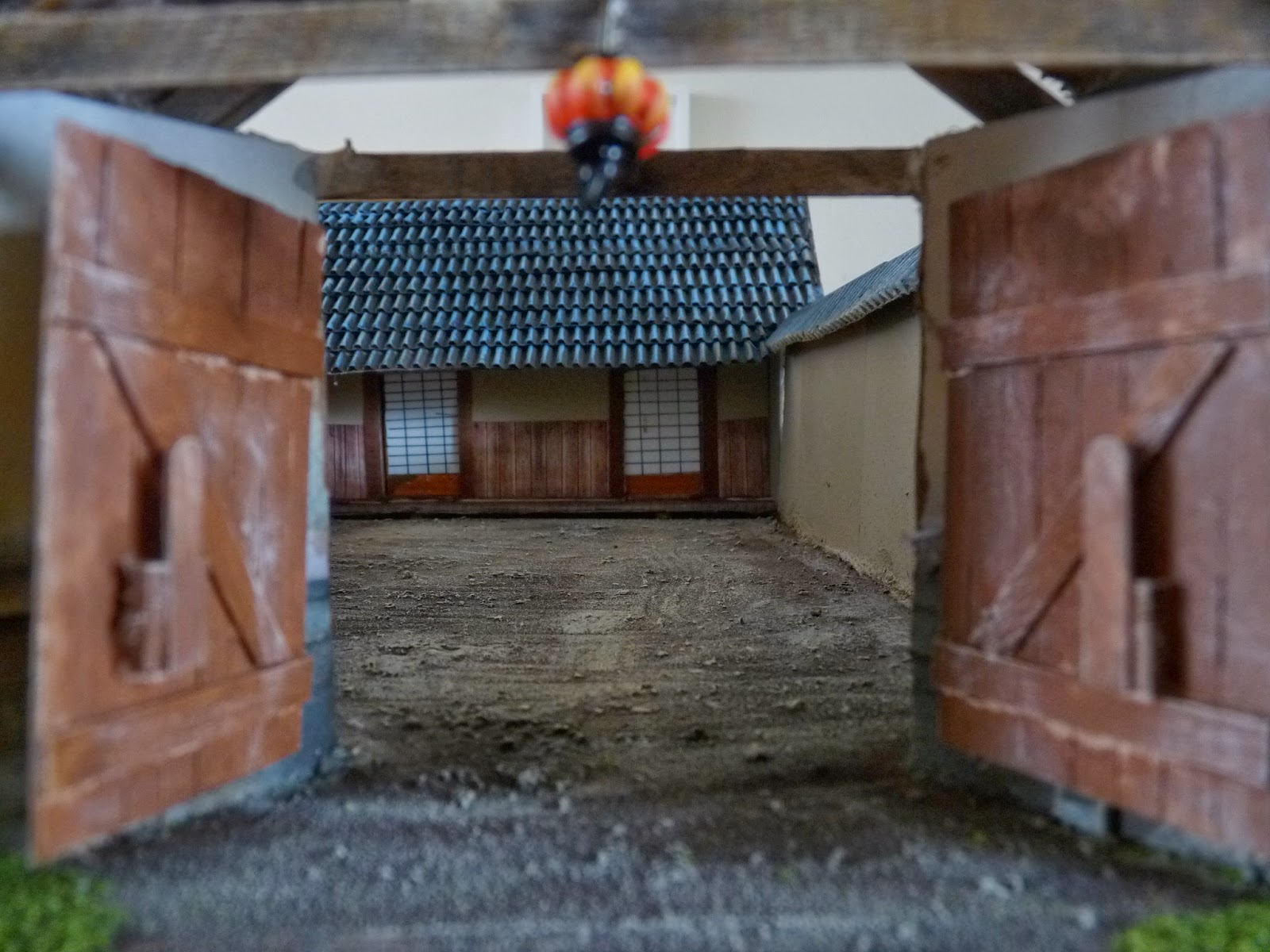 The lanterns are beads from a huge box with all kind of beads I bought years ago.

All that remains is the interior detailing. I always add a lot of prints for interior and exterior decoration. All are found on the Internet. Used are several different wood patterns, Japanese art and such. Japanese rooms were sparsely furnished in any case and as this is essentially a wargaming table enough room should be available for moving figures around. So tatami floor coverings and some ornaments (Buddhas, a wire Bonsai on a plasticard table or a vase made of a large bead) made up the furniture.  Added to these was a scratchbuilt rack of bows and arrows and some wooden boxes, some of which could contain an arquebus, powder and shot. 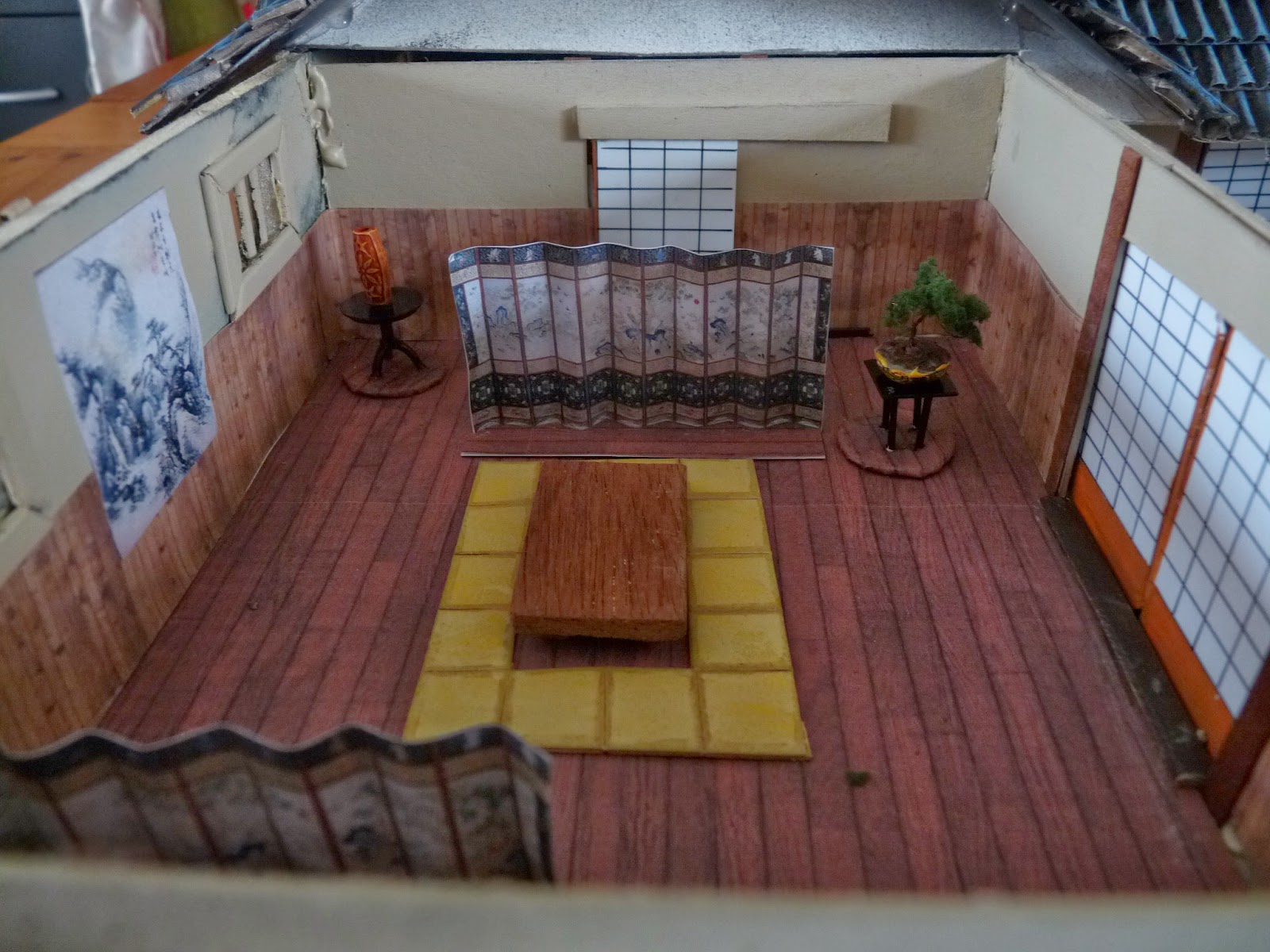 I also made modern furniture so I can use the manor for modern games as well. Below is the Oyabun's office. Mind the aquarium! All items are largely made from plasticard (old gift cards and credit cards) and plastic sprue or tubing. 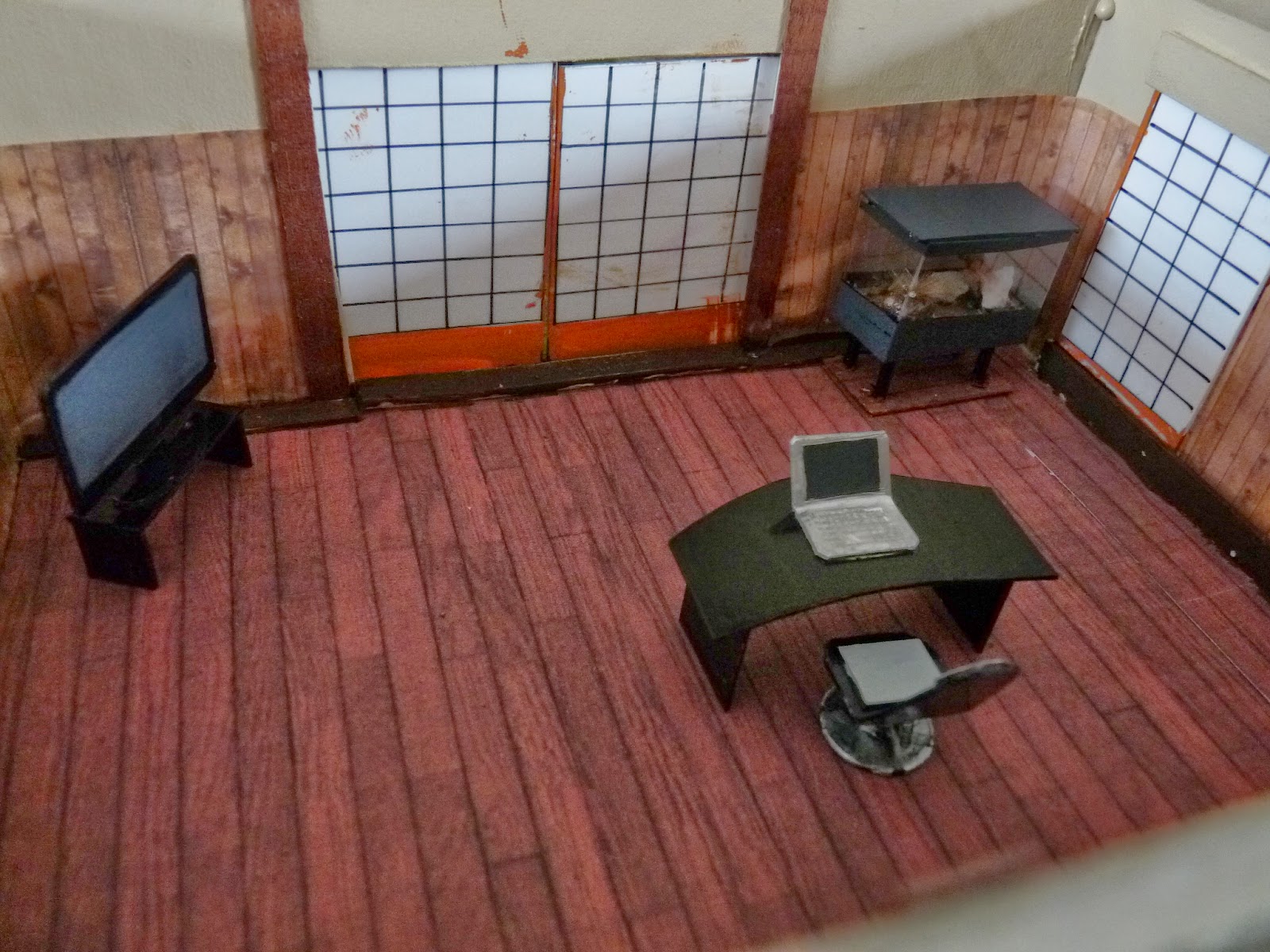 The local Chinese store also produced a lot of useful stuff. The screens are again prints. 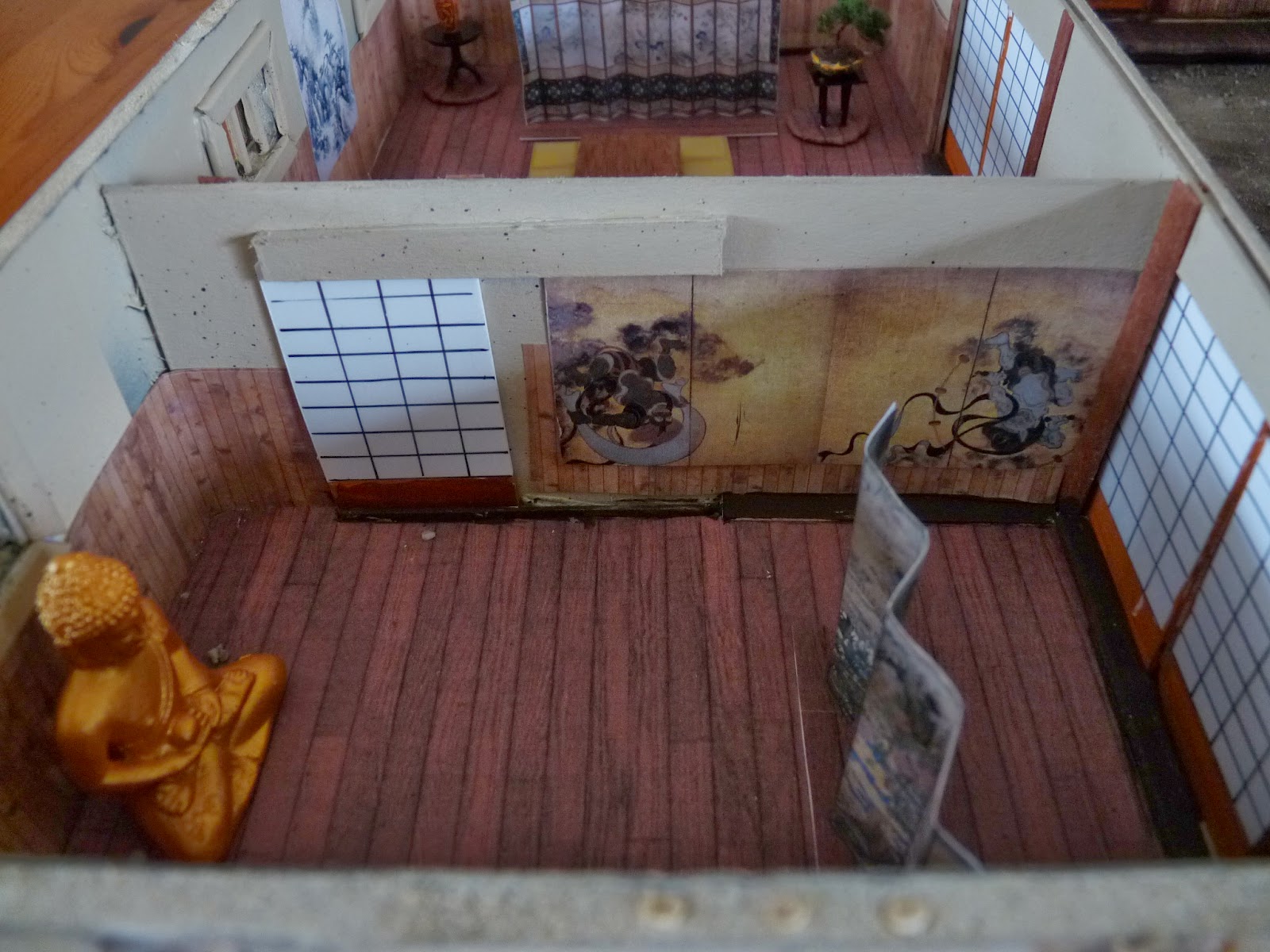 A rack of bows from the bit box and some balsa wood. 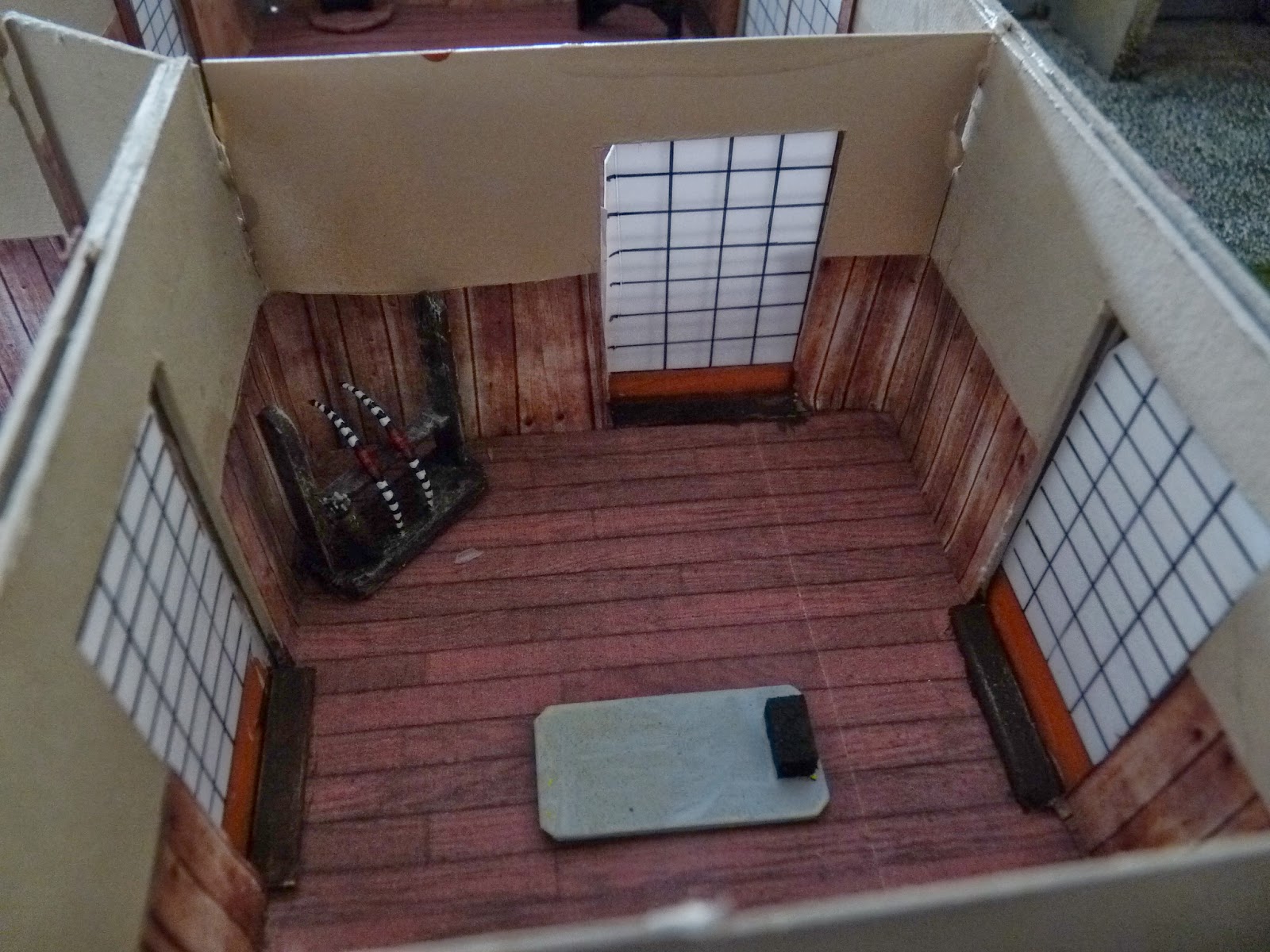 The garden. Mind the loose cherry trees. They can be replaced by bare winter trees for winter games. 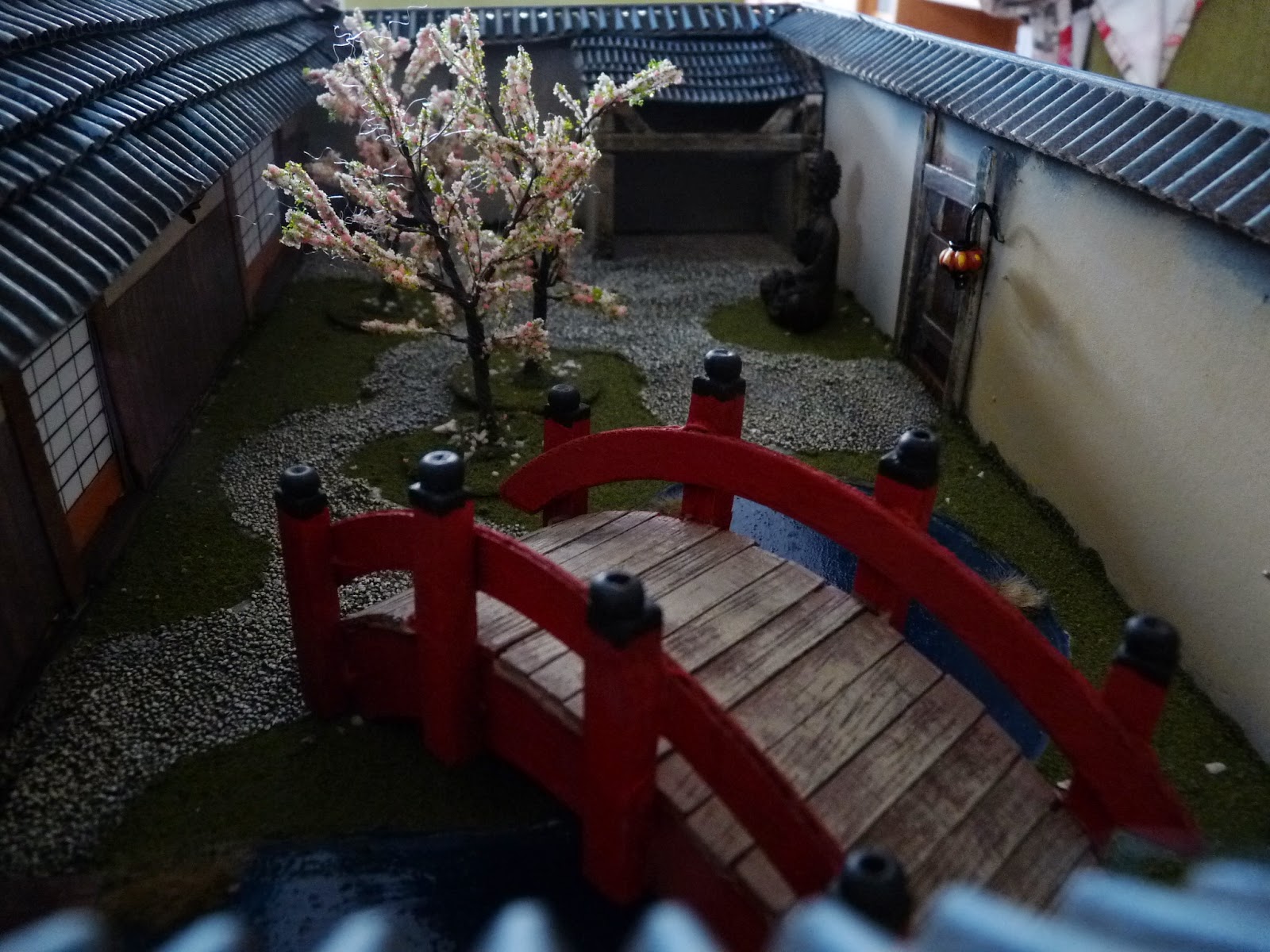 And the courtyard. Park your horse or BMW here (depending on the game played). I need to add a sword rack because it looks so darn Japanese and for any players that like a less bloody scenario in which the ninja steal something instead of kill someone. Whether they do so with or without violence, I am not able to predict. But I have my suspicions….

Thanks to Peter's generous donation I was able to add this Ancestral Sword Rack and Offspringly Firearms Locker! 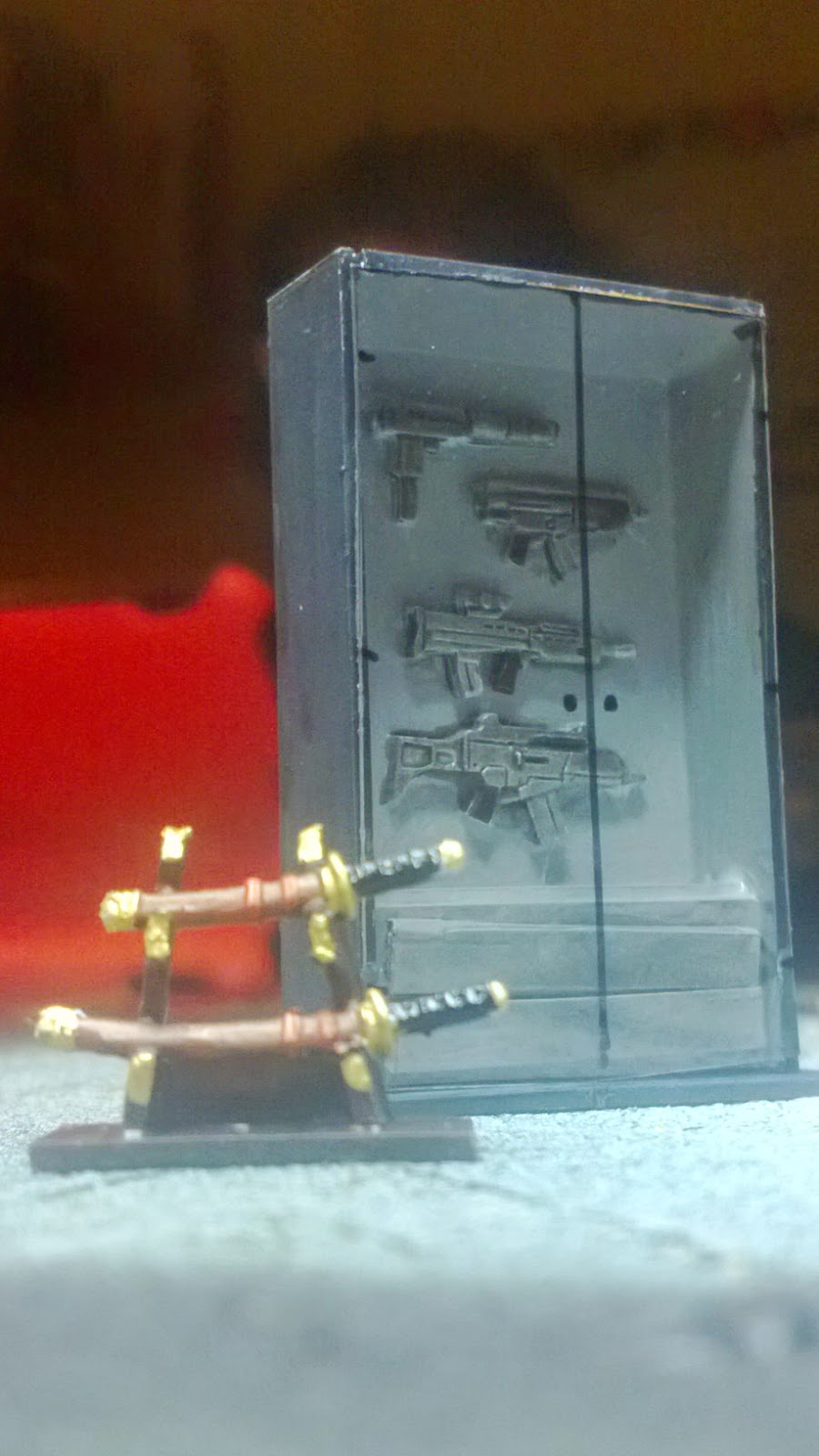