Cthulhu: Death may die: A review

The past few months I have been painting the miniatures from CoolMiniOrNot's new Cthulhu: Death may die boardgame and finally managed to get a few games in. Time to share my views on this game. 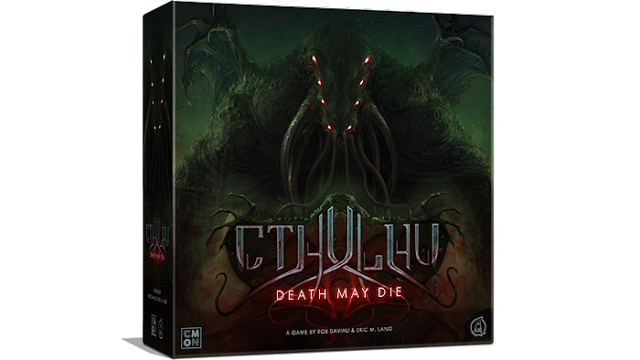 CDMD was released through Kickstarter in the summer of 2018. I went fully in and got it all, being a lifelong Lovecraft fan and completely persuaded by the miniature previews. No matter what the rules were, I had to have these minis for my other games.

The hardware
CDMD is completely up to the CMON standards I am used to by now. The game is packed in three boxes: Core game, Season 2 and the Kickstarter Exclusives "Unspeakable" Box. The first two boxes will be available in retail or already are. 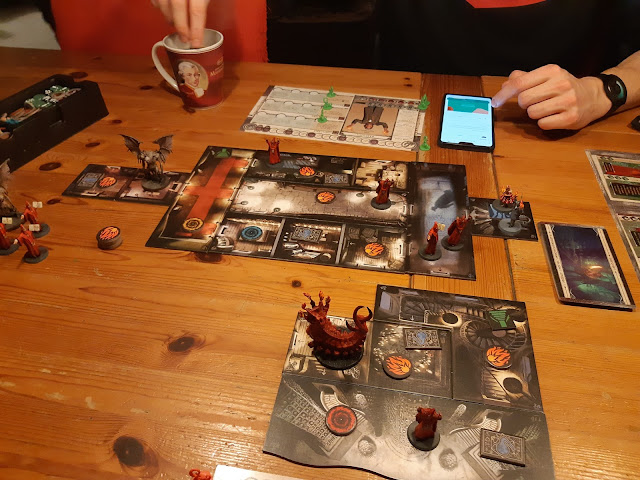 All components are high quality. The game board is modular and made up of thick cardboard two-sided full colour printed map tiles in all shapes and sizes. Halls, corridors and small rooms combine into a multitude of different game boards, depending on the scenarios to be played. Counters are the same durable cardboard or plastic miniatures (see below). The game includes stat cards for all enemies (Elder Gods, Monsters and Cultists) as well as all Investigators. There are plastic dashboards that will hold the stat card as well as the counters used to track Health and Sanity and such. 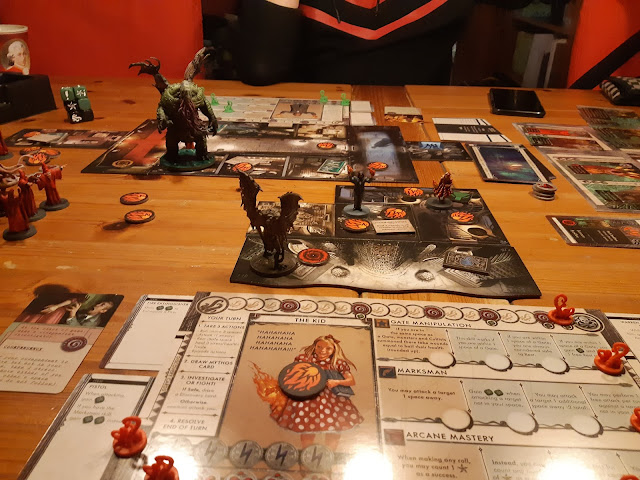 This game will fit back into the box even after being played. A major advantage in my opinion.


The miniatures were my reason for backing the KS. They are fabulous. Sculpting is excellent and all miniatures come already assembled, as many are multi part castings. The miniatures are large 28mm or 30mm scale (a rather fluid scale system in any case) which makes them useable in 28mm wargames for example. A definite bonus for me. They are made from hard plastic and paint well. As I speed-painted my way through them I spent little time cleaning flash and such but this was rarely a problem.


Miniatures include 5 Elder Gods: Cthulhu, Hastur (The King In Yellow), Dagon, Yog-Sothoth and The Black Goat Of The Woods, a number of  iconic Monsters, Cultists and 39 Investigators with a wide plethora of skills. Each Elder God comes with its own minions, so for example Cthulhu brings a Star Spawn and Dagon some Deep Ones. 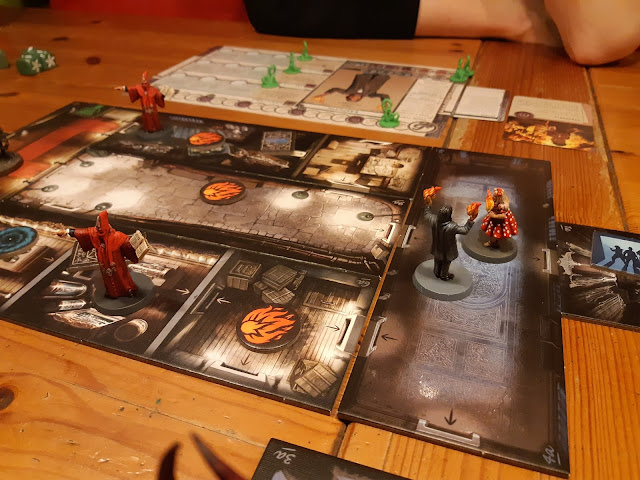 The rulebook is a full colour booklet with many how-to illustrations and comprehensive explanations of the rules, which aren't that voluminous to begin with.

Investigators activate in succession, take three actions of choice, draw a Mythos card (eldritch misery ensues and certain combinations of Mythos cards drawn in sequence will advance the timeline of the game) and either discover Goodies or are attacked by Baddies. Actions are usually made by a roll of the special dice, sometimes enhanced by bonus dice.

Dice rolls bring either successes, failures or Insanity for the Investigator. Investigators can buy a reroll by taking Stress, but the range of Stress is limited and exceeding it will lead to Wounds. Exceeding the Wound limit will kill the Investigator, as will exceeding the Sanity Limit. And while Wounds and Stress can be Healed by resting, Insanity usually advances unstoppable until the limit is reached and the Investigator is carted off to the Looneybin. In the meantime however mounting Insanity will give your Investigator extra skills and bonus dice.

All this means that you have to manage your stress, wounds and skill advances carefully and there are many, many choices to make. In that respect CDMD seems deceptively simple at first glance but turns out to be quite complex. Especially considering you will lose the game if an Investigator dies before the Elder God is on the board. Gods only arrive when the Ritual is disturbed or when the Mythos cards make the game enter the second red half of the game track. Gods can only be harmed after the Ritual is disturbed, so you REALLY want to do that before the God appears or you will have an invulnerable Elder God on your hands. You quickly find out that when you underestimate this game, your Investigators tend to die quickly!

The game can be played with 1-4 Investigators. The more Investigators there are, the faster the game track advances since every Activated Investigator will trigger a Mythos card and Mythos Cards will advance the game track. So the game has a cleverly built-in speed/brake system.

The scenarios
There are a number of scenarios available, set up like a TV series in seasons and episodes. Season 1 and 2 both have 6 episodes/scenarios and the Unspeakable Box has three more.

Each scenario comes with its own Ritual and its own specific way to disturb that. Each scenario brings specific Monsters to the game and there are always Cultists. Each scenario also brings its own half of Mythos cards and Goodies to be discovered.


The Elder God to be battled can be chosen by the players for each game. Some people pick it at random. Since each Elder God has its own specific powers and effects, brings its own half of the Mythos cards as well as specific minions, playing the same scenario with another Elder God gives a completely different game. Since Investigators can be varied also each scenario not only is completely different from the others but also extremely replayable.


What is good?
CDMD is a beautiful and interesting game that plays quickly (under an hour) and is very replayable due to the large number of variations that can be achieved by choosing scenario, Elder God and Investigator.


What could be better?
Two Elder Gods (Dagon and Yog-Sothoth) were KS Exclusives and will probably not be available in retail. While this is no showstopper it does limit the variability.

Some cards were stuck together during packing and damaged a bit when unpacking and during use. But then I am too lazy to use card sleeves which might have prevented that.

Conclusion
Absolutely recommended! And I sincerely hope that the Exclusive Elder Gods and the other minis will be released in retail as well.