I made some more progress in my Barsoom project. Inspired by the magnificent models by Tre Games I decided to build my own. The TG models are 15mm scale (except for one, heftily priced and sport a LOT of deck buildings that severely restrict the playing space on the decks.

As usual I started with some sketches. 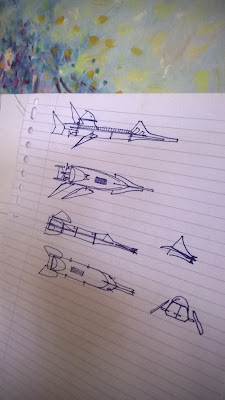 Based on my experience with the Aphid class gunboat I would build the entire hull and wings out of MDF.

The outer hull would be made out of thinner MDF or foamcore to save weight without sacrificing the sturdiness of the hull. This mainly because the paper outer hullskin of the Aphid obliges you to think before you pick it up to prevent crushing the hull.

I proceeded with many sketches, struggling particularly with the wings and the bridge.

I wanted as much deck surface as possible to move figures around, but still enough detail to look impressive. And of course there would have to be guns on the deck, railings and other fittings that you would expect on a ship's deck.

Then I drew all the parts on MDF plates and started sawing away with the electric saw.

That provided me with A LOT of parts.... 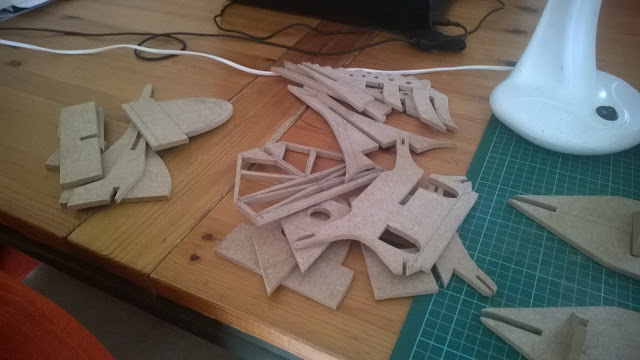 After sawing and sanding the fitting and glueing could start. Here the underside of the decks is shown with the ribs for the outer hull sticking upwards. 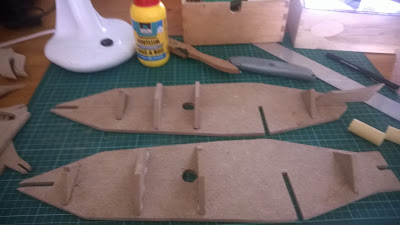 The tailpieces as well as the bows were supposed to be able to come off. This would greatly shorten the model's length and would ease storage (and painting). Below is one of the two tailpieces I made showing the fit. 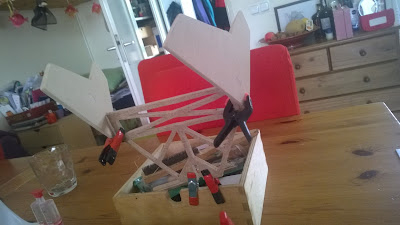 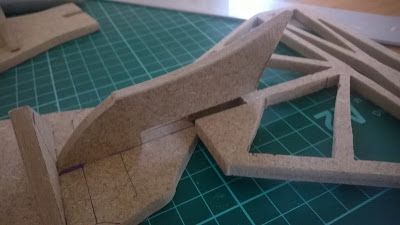 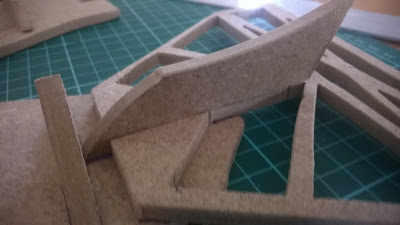 Below is the other tailpiece, which also slots into the rear hull. 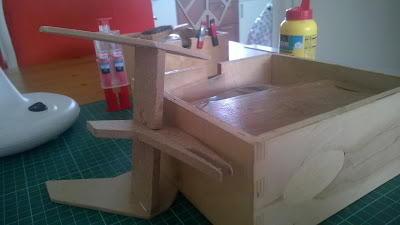 Below is the pipe that will eventually hold the entire ship suspended on the steel rod of the standard. This way, the model can "fly" over the tabletop and easily adjust height as per my skyship rules. 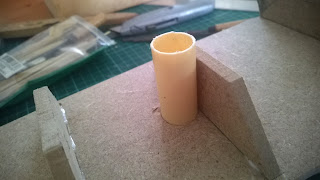 Here are the two hulls, clearly showing most of the wooden parts in place and showing the hole in the hull to fit the standard. 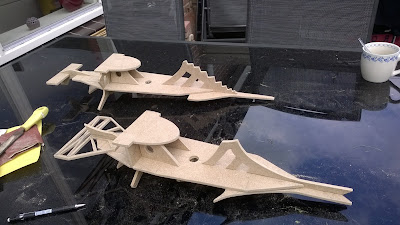 The first fit after glueing however showed a serious flaw in my designs. You can clearly see the ships tilt backwards, because the weight of the wings, bridge and tail drags the rear part down. Not only put this great strain on the standard fitting in the hull, but also permantenly tilted the deck. Darn..... 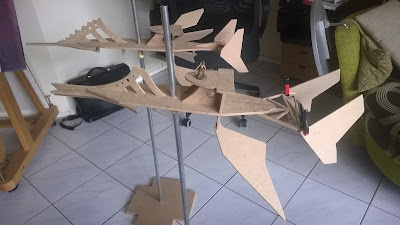 So a re-design was in order. The bridge was removed, the standard hole moved some 10cms to the rear (after carefully figuring out where the balance actually was, like I should have done in the first place....) and everything was glued in place again. Leaving me with a great big hole sitting in the middle of the deck....

What to do about that? Time would tell. But as you can see the balance was greatly improved! 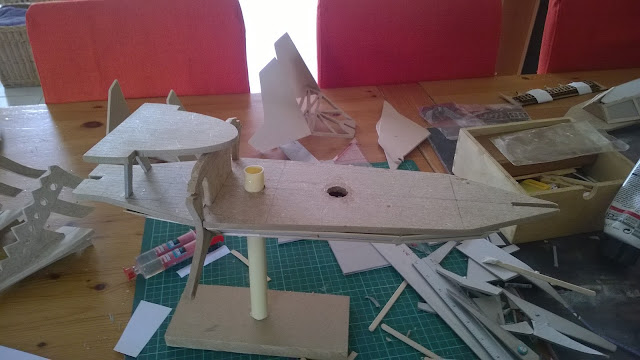 Below the hull is covered with foamcore parts and bits of ye olde coffeestirrer. 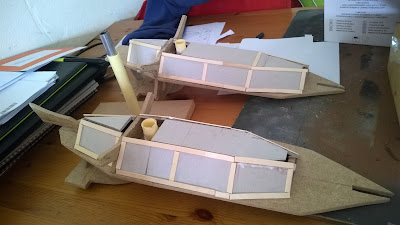 The railings were made by Pat's Laser Cuttings, as no electric saw can rival a fine detail laser cutter. Ordered to length they fit perfectly! 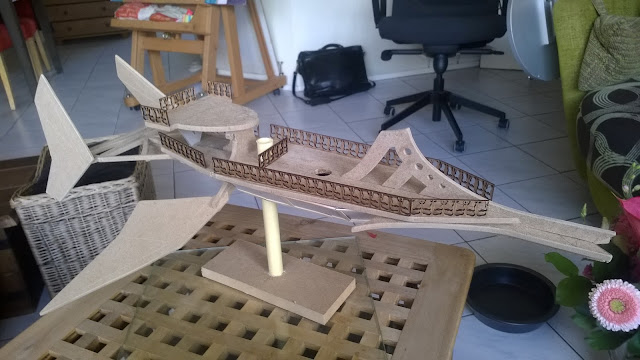 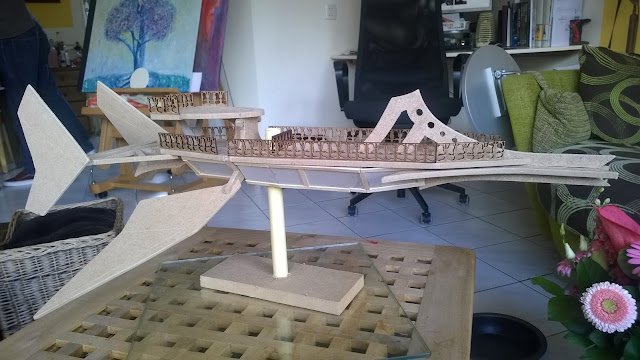 The bridge will be covered by a dome made of unbreakable Barsoomian sun-crystal (blablabla) which started its existence as the transparent part of a big plastic Easter egg. The 28mm figure is showed for scale. 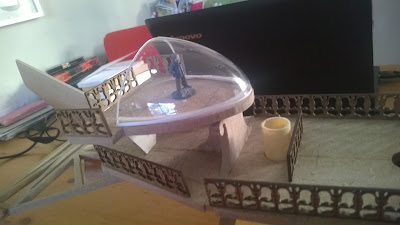 The model so far scored approving looks of my better half 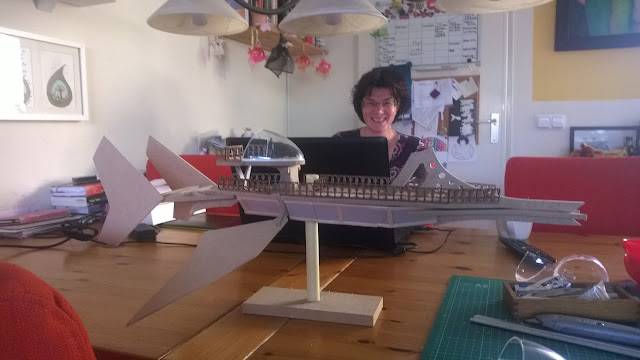 Then I started on the many details that were to cover the decks. The bit box yielded more than enough futuristic stuff to make some convincing cannon. Can you already guess what I will do with that surpluss hole in the deck? Here are the heavy Shock Cannon. Each ship will carry one. 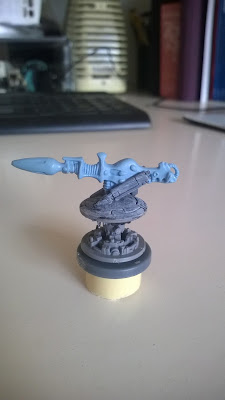 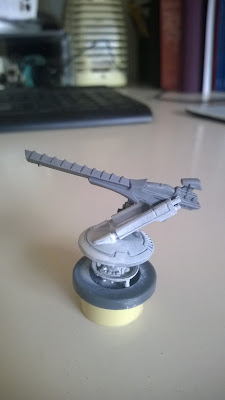 Something that is apparently a Dark Eldar Star Cannon (who ever knew?) provided the lighter Pulse Guns of which each ship will carry four. 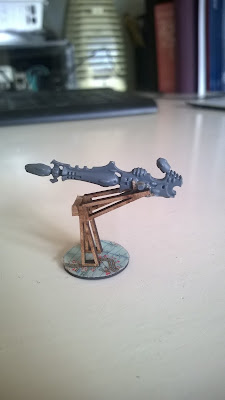 The gun mount was made from those little triangles that came in abundance with the railings and were meant to prop those up for sturdiness. There were so many however, that I just had to put them to some more use.

That's all so far folks. Keep posted for part 2!!