Some impressions of our game from the Tomorrow's War rulebook where Neo Sovjets battle Prince Zenchikovs power armoured elite troops in the streets of Novolgograd.

It is an intriguing scenario that offers a wide variety of strategic choices. We played it two times in the course of an evening, changing sides.

My buddy Gerco took the first turn as Neosoviet and started a cautious advance. Tsarist militia sheltering in the ruins laid down a very effective covering fire. He nevertheless managed to score a devastating hit on the center power armour squad but the other ones made it off the table quickly and safely, resulting in a Tsarist win.

We then changed sides and my Neosoviets, most likely properly indoctrinated by Kommisars and cyanide pills boldly stormed into the streets ignoring the militia and aiming for the PA units instead. Reaction fire then decimated the militia resulting in either a draw or a narrow Neosoviet victory. I made some spectacularly good armour Saves! 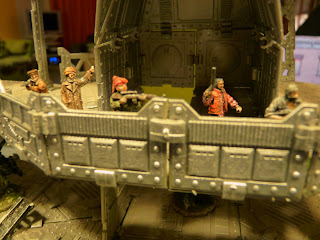 Militia hiding in a building. 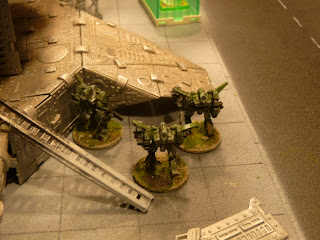 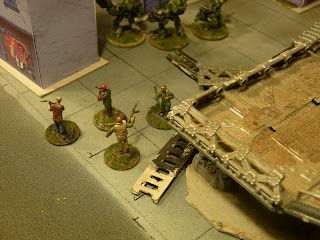 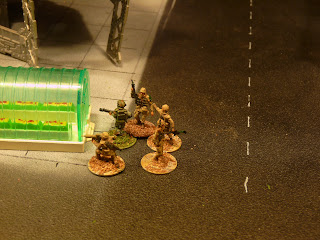 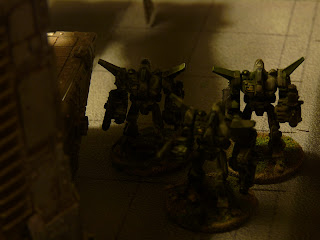 An athmosphere picture of PA troopers hiding in the shadows. As it happens, it didn't help them one bit...
Geplaatst door Pijlie op 11:25 AM 1 comment: