Once more Osprey has released one of their little gems in the Osprey Wargames series. A Rennaissance successor to Ronin called En Garde is the latest addition. 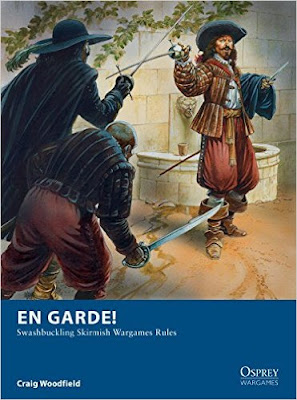 En Garde is a tabletop skirmish wargame based on the Ronin rules "engine" en set in the Rennaissance period. Meant to be played with some 5-20 figures per side it covers the historical period from around 1550 to 1750. That means fans of the Three Musketeers, Alatriste, the Border Reivers and all kinds of small actions in the English Civil-, Thirty Years- and Eighty Years War have finally found their ruleset!

It is written in the standard Osprey format: A5 booklet in full colour across 64 pages providing a complete ruleset. Apart from the rules the book offers special rules, army lists as diverse as Conquistadores and Aztecs, Musketeers and Turkish Janissaries, scenarios and some tips on making your own army lists and reading. 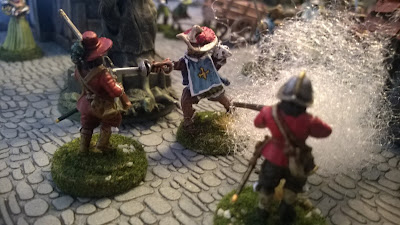 Just like in Ronin a turn has a Priority (Initiative + Morale) , Movement, Combat and End (Combat results) phase. The Action Phase however has been dismissed.

Also like Ronin the game has an alternate turn sequence. Players move their figures alternately starting with the player with highest Priority moving one first, then the other player moves one et cetera until all figures have been moved.


This achieves the same tactical depth in the game, as figures strive to maneuver into the best positions one by one. Unlike Ronin, En Garde enables group Activations by ordering groups around a Commander (an Attribute for high-ranking figures) to execute the same action all at once. Deadly musket volleys ensue!

Missile weapons only fire once per turn in En Garde and usually must be reloaded, which also takes a turn. As the Action Phase has been removed, firing and reloading missile weapons now happens in the Move Phase instead of Moving or (modified) after a Short Move. Miscellaneous actions happen in this Phase as well, instead of or alongside a Move.

The terrific Combat system from Ronin has been transplanted and improved. While in Ronin combatants could use chits from their Combat Pool to simply enhance attacks or defences, in En Garde opponents may choose from a number of specific enhancements. Parries, Feints, Ripostes and Mighty Blows all cost Combat chits but deliver different benefits and penalties. Selecting your Combat Pool is now only the beginning.

In practice this results in a tense and quick game wherein a skilled Musketeer can hold his own against a horde of knife-wielding ruffians, may play for time by Feinting but may still be overwhelmed by their numbers before reinforcements show up.

The black powder firearms are slow to reload, but have range and are especially lethal at short range. Interestingly, pistols may play a part in close combat.

The book includes 8 scenarios and a simple campaign system. Inspiration for more scenarios is not hard to find in movies and books of the period. There are even tips for adding Fantasy elements like witches, werewolves and Revenants and a certain duo of large Barbarian and wiry Thief.
As yet untried is a simplified Attack procedure also included in the book to facilitate larger group actions. 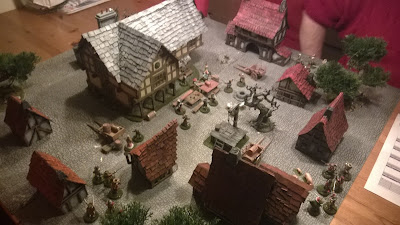 Conclusion: like its predecessor Ronin En Garde is an interesting, quick playing game with lots of athmosphere for the period it is placed in. Recommended!

I already have a Dutch Revolt table in mind.......