Last saturday night we played our latest game for Tomorrow's War. We used an historical WW2 scenario (originally written for FOW if I am not mistaken) and adapted this to TW.

Below you see the table. Left center is the village of Maisoncelles, for TW purposes situated in the Republic of Arden on the planet Glory but originally placed in France in 1944. From the lower left corner DPRG troops and armour (originally British with Sherman tanks) advances on and past the village. They will encounter entrenched elements of the United States Marine Corps (originally SS Panzer Grenadiers with two Panthers and an 88mm FLAK gun) that  have taken position in the woods and fields top left and center and are reinforced with a heavy AT gun (right top center) on the hill on the right and two Perkins Grav Tanks. The USMC armour is somewhat surprised by the DPRG advance since they are performing maintenance and neither tank is ready for action. They will be operational on a roll of 5-6 on a D6. 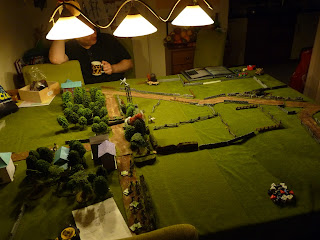 Below you see US Marines taking cover in the woods in the center of the table. Two squads formed up the vanguard, one defended the AT gun and one was held in reserve on the right flank. 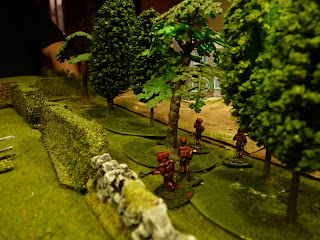 Here the AT gun is placed behind cover and defended by Marines. Placed on a hill it occupied the ideal defensive firebase and used this to devastating effect. 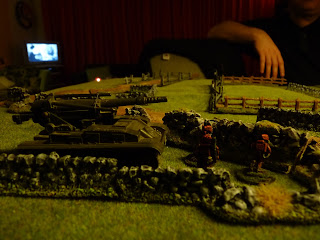 The DPRG opted to advance their infantry on the right flank and center and intended to follow up with a punch throught the woods in the center, taking cover from the woods up until the last possible moment before engaging the AT gun. 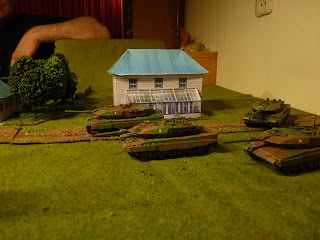 Here DPRG tanks cross the road into the last remaining woods that separate them from the AT gun. In the meantime one of my Perkins tanks managed to start and advanced at top speed to outflank the DPRG armour. In the foreground one of my front squads just before they gave way and retreated before the DPRG tanks. 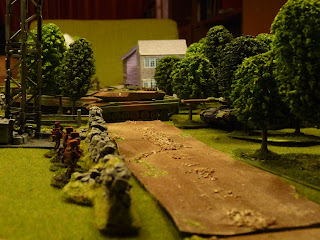 Here DPRG troops advance beyond the woods and village. They took heavy casualties from my front squads and HE rounds from the AT gun. One of my front squads dallied too long and got wiped out by the advancing DPRG armour. Lacking AT weapons, they should have stayed out of harm's way anyhow, but taking potshots at the DPRG infantry proved too tempting... 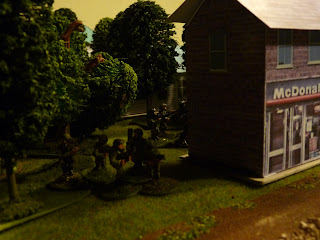 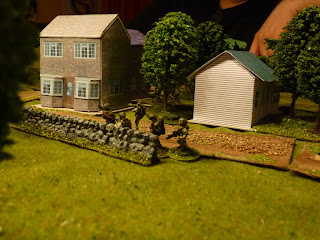 Here the DPRG tanks met their Nemesis. The AT gun started firing as soon as they cleared the woods, resulting in heavily damaged and knocked-out tanks. I don't think the gun lost a single Reaction test or missed a single shot. 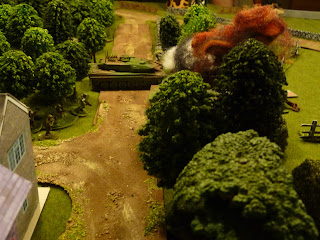 Burning DPRG tanks at the edge of the fields. DPRG infantry had been stopped dead in their tracks by now. 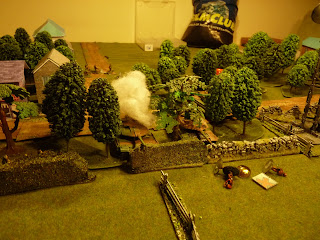 I didn't get it all my way however. My one functional tank got hit by a lucky shot from a DPRG tanker without getting off a single shot (mainly due to me completely forgetting to make reaction tests for it as soon as the DPRG tanks cleared the woods....) 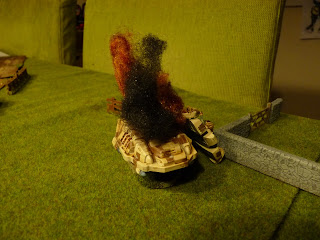 The final stage. Burning DPRG tanks in the center, an invincible USMC AT gun still firing away and DPRG troops decimated and retreating. I lost one squad and one tank. The second tank sat out the battle still having its gearbox re-assembled or something. 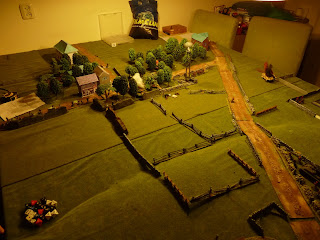 The translation from a 1944 scenario to a Sci-fi one worked flawlessly. Having the USMC at quality 10 was perhaps a bit too much, but the rest worked as it should. We used Tech Level 2 tanks for the Shermans and TL 3 tanks for the Panthers that originally fought at Maisoncelles. The 88mm gun was just a Heavy AT gun with HE rounds for anti-personnel fire.  7 DPRG squads against 4 USMC squads made for the right superiority in manpower that was orginally the British advantage.

In 1944, the British Guards eventually took the village with heavy losses. Here however, things turned out differently.
Geplaatst door Pijlie op 9:45 AM 5 comments: