The Making of the Raid Pt 2: The scenario

A scenario for Ronin

Objective:
The assassination of the chief occupant of a large fortified manor or, if you are feeling less bloodthirsty, the stealing of a precious object like an ancestral sword or idol.

The house should be large, full of separate interior and exterior spaces that –in case of the interior ones- can be blinded to one or both players. 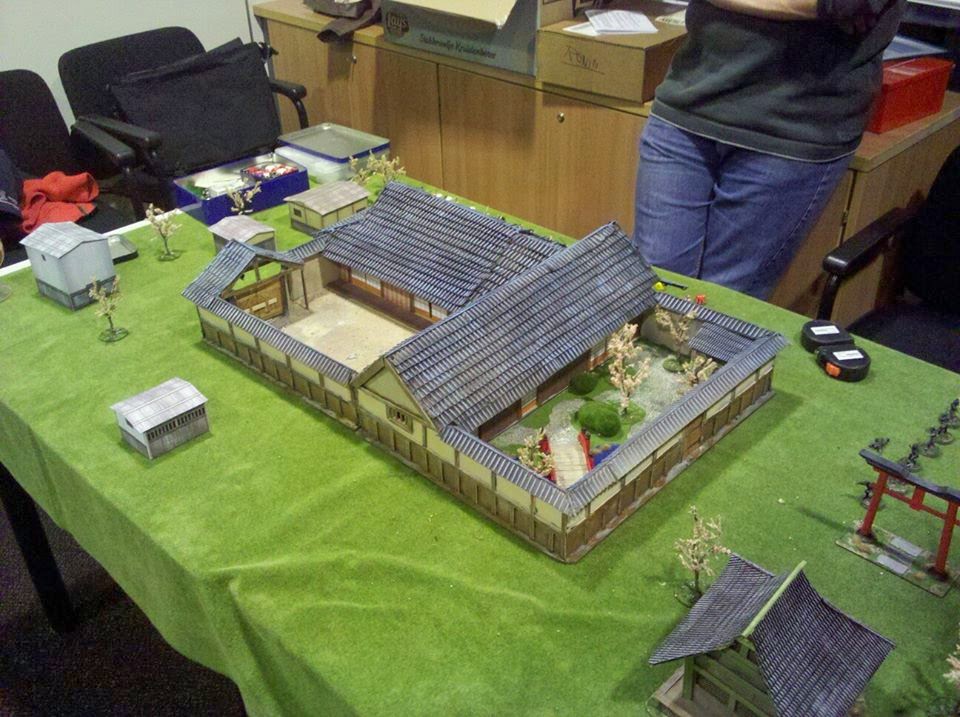 Forces:
Attacker: six rank 3 ninjas, armed with katana and shuriken. They may share among them 2 rope-and-grapplehooks, 3 smoke grenades and 1 blowpipe with poisoned darts.

Defender: 1 rank 3 Daimyo (the target) with katana, 10 unarmoured samurai with katana, (9 rank 3, 1 rank 4) and about six to ten rank 1 civilians: servants and the Daimyo’s family, with no or improvised weapons.

Circumstances:
The raid may be executed in night or in daytime (attackers choice). 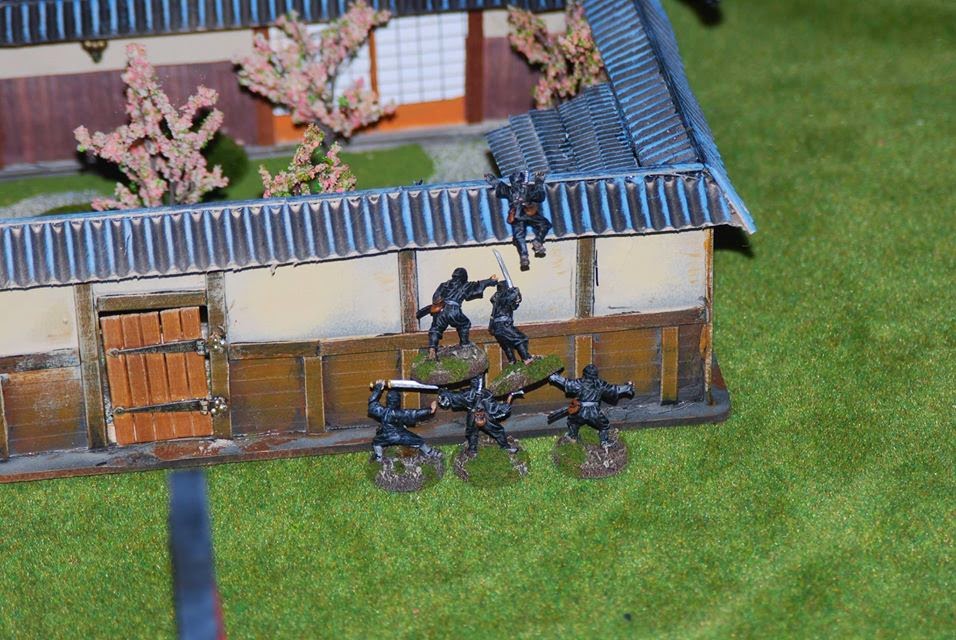 At the start of the game the defender allocates all figures to spaces of the manor, represented by dice. He does this by throwing a die for each figure into a room that he wants the figure to be in and blinding the room. The Daimyo has a green die, his samurai red ones (yellow for the rank 4) and the civilians white ones. He may distribute his figures as he sees fit during daytime, but at nighttime he is limited to rooms inside the house, apart from two sentries that he may post near the main gate, the rear (garden) gate and in the square at the front of the house.

The daimyo and his wife get a room for themselves. The samurai must occupy at least two other rooms. Every room containing samurai must contain at least one civilian.

When entering an interior space, the attacker may remove the blind. Figures will then be substituted for the dice. The Defender may remove blinds at any time. The dice scores tell him the state of awareness of its inhabitants:

Awake inhabitants will immediately notice the entering ninja. Sleeping inhabitants will only do so on a roll of 6 and will then awake. Awakening figures may use an Attack chip or an Action to sound the alarm.  Awake rolls will be made by each sleeping figure for each turn ninja(s) move into, through or in the same space. Running ninjas add a +1 to an Awake roll. Ninjas doing nothing will not trigger awake rolls. Awake rolls MAY be made by the defender every time noise occurs for every figure in the manor.

The attacker then chooses one or more directions of attack. He may attack from one or several sides, starting at least one normal move outside the manor’s walls. The game then begins. 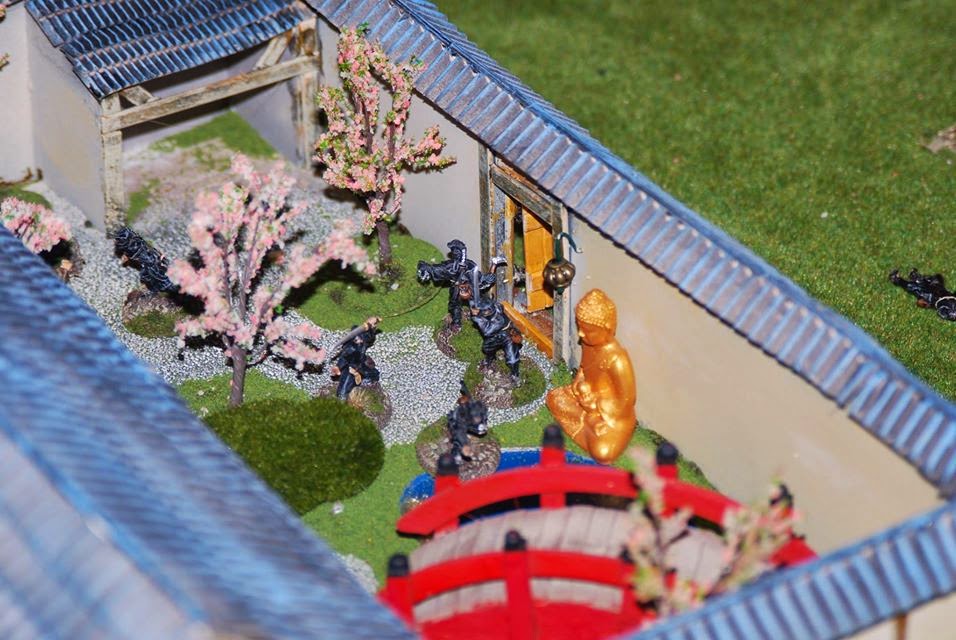 Noise and Confusion:
Ninja will usually be able to move silently. However, using grenades, forcing walls or shoji doors, shouts of alarm, falling off a roof or wall and sounds of combat will make a lot of noise and trigger Awake rolls. Using grappling hooks to climb walls or roofs may result in a noisy fumble. Using a grappling requires a ranged attack. Any result of 1 is a fumble and is classified as noise.

All these awake rolls will receive a +4 modifier within one space, +3 within 2, +2 within 3 etcetera. Any result of 6 is always an Awakening. Awake inhabitants will always hear the noise and may act accordingly.

Due to the mazelike nature of the manor, mere noise will not tell the inhabitants exactly what is going on. However, the defender may unblind spaces and start activating and moving awake inhabitants either toward (samurai) or away (civilians) from the noise, via the shortest route.  This will of course alert the attacker to their actions and vicinity and perhaps the location of the target.

Guards
These are the awake guardians of the garden and the courtyard. A sentry makes a daytime awake roll at the start of the game as soon as the defender may want to activate him (and therefore may be asleep on a roll of 6).

As long as they do not hear Noise, they move randomly on a scatter die + D6 inches, They may not move inside the building or outside the walls but "deflect" against the walls. A guard always faces in the direction he walks in and has a 90 degrees field of vision.

Sneak attacks
Sneaking up on a guard from behind and killing him gives the attacker one freely enhanced attack (for one Attack chip only) against a target that may not enhance his defence. A grievous wound or better results in a soundless subdue and the guard is out for the game. A light wound or less causes noise and enables the guard to raise the alarm.

Killing sleeping inhabitants works the same. However it makes a little noise. All surviving sleepers in the same space will get another Awake roll +1. Effects are invoked instantly.

Smoke grenade:
A ninja may drop or throw a smoke grenade while moving (max 6") at any point of his move. Throwing requires a ranged attack of at least 7. Place a 5" smoke cloud over the area. Ninja may move freely through this cloud. Samurai may move as desired, but in a random direction. Bumping into each other ends the move for both figures for this turn. The cloud dissipates at the end of the turn.

Blow pipe
One ninja wields a blowpipe with poisoned darts. Range 12",  -3 against all armoured opponents. Any result of a wound is a Critical Wound. May not move and fire. May only fire once per turn.

Victory conditions
Succeeding in the mission yields victory to the Attacker. Failing does so to the Defender. Play the scenario twice, switching sides the second time, to determine who wins the game.

Variations
Victory conditions:
A succesfull assassination (or theft) yields the Attacker 6 points. A killed ninja yields the Defender 1 point. This enables a draw.

Weapon caskets:
The Defender may place a weapon casket in two rooms. These caskets contain one yumi with arrows or one teppo with powder and shot. Emptying a casket takes a turn. The teppo needs to be loaded as well.

Infiltrator:
Only 5 ninja attack the building from outside. One samurai is in reality an infiltrator and may  reveal himself as a ninja. He is controlled by the Defender as long as he is "asleep" and until the ninja player takes over once he is awakened and activated by the Defender.


Thanks go to Ivo and Gerco for playtesting and improving the rules.
Geplaatst door Pijlie op 8:41 AM 4 comments: