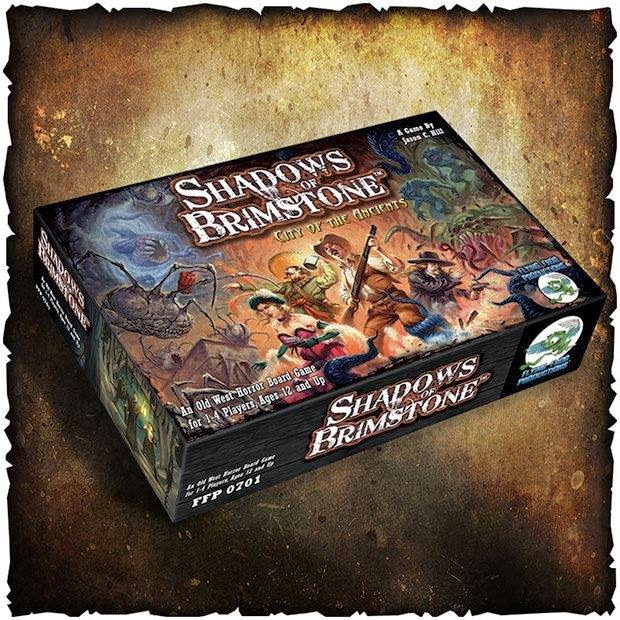 I have been a long time fan and reader of H.P. Lovecraft and his weird and creepy tales. Whenever possible I try to collect his creations for the wargaming table so when I came upon some flying three-tongued snakes I was of course very interested. Some tracking revealed they were part of a new boardgame and thus I fell for the creepy charms of Flying Frog's Shadows of Brimstone game.

SoB was originally a Kickstarter in 2014 but I  missed it completely. This was very fortunate for my financial health, since I would doubtlessly have spent a fortune on it.

SoB has several unique features. First, it is a horror boardgame set in the Old Wild West. The game's fluff recounts that a strange mineral was found in the second half of the 19th century: Darkstone. Darkstone proved very valuable and very dangerous. Eventually the hoards of Darkstone tore rips in the fabric of reality and Earth became connected to other worlds, from which monsters enter ours and destroy at will. Here the players start: Heroes every one of them they fight the Darkness wherever they can! 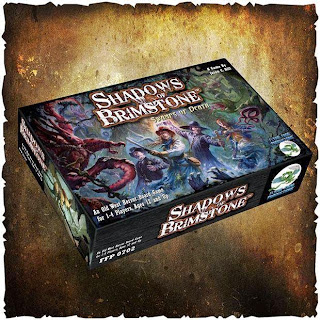 Another feature is that the game is set in several alternate worlds. Games usually start in the Darkstone Mines set in the Old West, but may spill over into any of the alternate worlds connected to Earth by way of Gates. So far Flying Frog has released two boxed sets, each holding the Mine/Earth world and one other one; the sweltering Swamps of Jargono and the frozen Targa Plateau and its ancient city. Each world brings specific threats and advantages.

Flying Frog's release schedule promises at least three more Other worlds in the coming years, the first of which; the Caverns of Cynder to come out in September 2015.

The board is another, if not unique then at least creative, feature. It is entirely built up from puzzle tiles. You can play on either a pre-made board or pull Map cards during play and discover the board while playing. Each tile has a "Mines" side and an "Other World" side. So even during a game you can hop into another world!

Chambers yield randomized encounters and events, mostly card driven. Falling rocks, growing fear and attacking monsters will try to defeat you while you and your fellow Heroes try to beat the game.

The game comes with its own plastic monsters and heroes and a multitude of counters. The miniatures require some/a lot of modelling skills, depending on how nice you want them to look on the board. With some skill and paint they can be made to look excellent in my opinion. 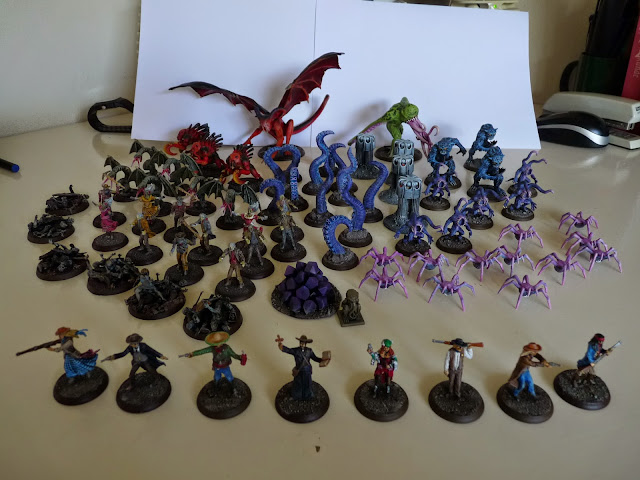 Each boxed set comes with four Heroes so will harbour four players. Buying a second boxed set gets you four more Heroes, another Other World, new Mine tiles and a new set of monsters and threats. The game can be played with six players at that stage, this being the maximum number the designers have envisioned.

The Heroes are Old West archetypes: the Gunslinger, Law Man, Saloon Girl and Indian Scout being examples. Each has different strengths and weaknesses so there are combat machines, long distance fighters, fast hitters and special types, like the "magic" wielding Priest and the dynamite slinging Bandido (my favourite!).

There is no Game Master, since the game itself is the opponent. This works very fluently even to the point of creating an unpredictable deadline for each game which you will have to beat. The game is therefore cooperative: the players compete with the game, not with each other. The aim of each game is to collect a given number of clues (found through the encounters in the chambers) and then play the Endgame: a true computergame-style endboss-defeating Endgame full of threats and mayhem. On the road to the endgame you are plagued by sanity-wrecking monsters, mutating Darkstone, cracking ceilings and other nastiness.

The game can be played stand-alone as well as a campaign. In between games, you can play the mini-boardgame Travelling Into Town where you travel to the nearest frontier settlement to replenish your supplies, buy weapons, trade and heal and you can even have deceased Heroes ressurected (if you have the money to pay for it!). During the game you collect Experience Points (blast from the past!) and when a given treshold is reached your Hero levels up and can do more/shoot straighter/drink harder or whatever benefit the new level brings. Heroes may develop along several routes, so here too is the option to add versatility to the game.

There is room for scratchbuilding fun. The cardboard Corpse Pile counters (one of the most annoying monsters in the game) fell short of my expectations so I made my own from zombie leftovers I hads lying around. Likewise the pile of Darkstone the Void Spiders below are crawling over is homemade.

Long ago in the 80ies I begun my gaming life with Fantasy Roleplaying. My first miniatures were bought with this in mind. Gradually I moved to miniature wargaming until I rarely played any boardgame anymore. However SoB has made me come back full circle: horror war/roleplaying on a board with miniatures!

It's a great game. I am looking forward to its expansions in the coming years.