Pijlie's summer holidays this year had a lot of firsts; three weeks in a row for the first time in years, the first walking holiday, the first trip to the Border in Northern England, the first gut-wrenching drive in the UK (EVERYONE drives at the wrong side of the road! ALL the time!) and a first visit to Hadrian's Wall.

We started our trips with a two-day stay in Brampton, some 10 miles east of Carlisle and in the middle of Reiver Country. Stopping for coffee in the market square the first shop we ran into (completely unintentional, I swear!) was Hadrian's Hobbies. A wargaming and modelling emporium open fridays and saturdays. Of course we arrived on monday. Rats. But the collection looked nice and I even spotted some Skeleton troopers in the coffee bar next door. So the hobby is spreading in Brampton.... 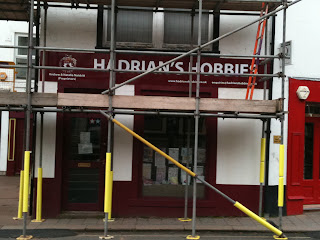 That afternoon we decided to break in the walking muscles and ran into to this beautiful 18th century church and graveyard, Ye Olde Churche outside of Brampton. If looking for inspiration to build this kind of terrain you could do no better. 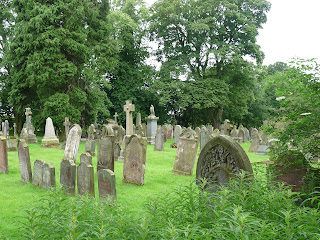 On the third day, after much hiking, we decided on a resting day and visited Carlisle. There was much to see. Second hand book store Bookends in Castle Street provided me with The Border Ballads by James Reed, Tullie House gave me a beautiful map of the Border with the great riding surnames' turfs and last but not least the chance to wear a morion! And of course we tried to read the Great Curse uttered in 1525 by the then Archbishop of Glasgow, Gavin Dunbar who put a curse on all the reivers of the borderlands. But we fell over before we managed.... 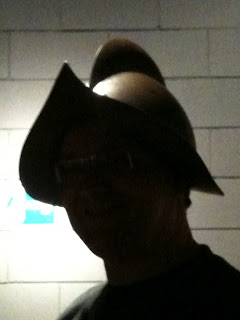 While reading the Steel Bonnets (again) by the late George MacDonald Fraser I rediscovered a sizeable but little known battle in the vicinity of Brampton (The Battle of the Gelt in 1570) which should warrant some more research and a game or two to be played with my new Pike & Shotte army!
Finally we visited Carlisle Castle, easily the grimmest castle I have ever seen. No soaring turrets and flags here, but just an all-business massive defensive work built to resist any and all that could be thrown against it. Reputed to be the most-besieged castle in Britain, one can only wonder why you would want to throw yourself at something like this... 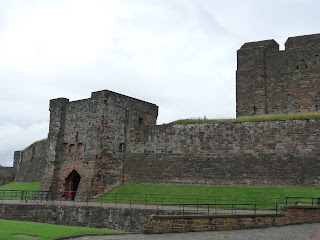 The castle also houses an army museum. There is a lot to be seen there, but everything is packed into a very tiny space (the museum is trying to build itself up) which results in a strangely depressing and eclectic jumble of militaria. When you can handle the athmosphere and are prepared to invest some time, there is a lot to be seen about Britain's military history. 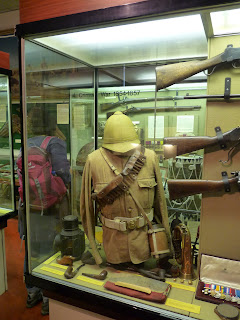 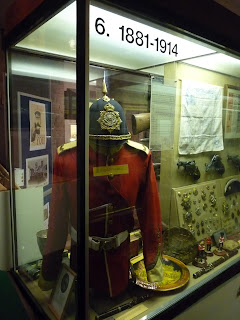 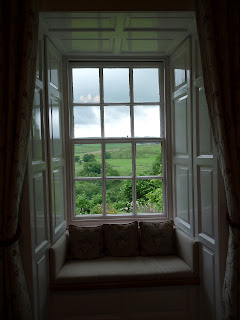 After Carlisle we drove up to Gilsland to stay in The Hill On The Wall, a renovated and modernised bastle house overlooking the Wall itself. The stoney ridge running through the second line of windows from below is actually The Wall!

The wooden panels by the way are not shutters. They are the lining of the outer wall of the old house. Here you look through the window made into the wall in later times, where you can easily see that the wall is almost a meter thick! 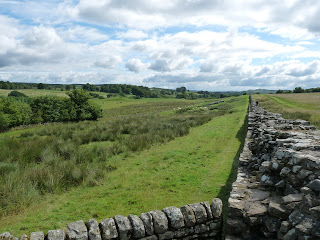 We made quite some mileage along the wall itself. Here it stretches as far as the eye can see to the east as seen from the fortress Birdoswald. Having been drawn to the area by an interest for its history as well as its natural beauty and the walking, I was amazed that most people who "walk the Wall" are seeing it as a sports event. But then, when you aim to walk 20 miles a day in this rough terrain, I suppose there is no time for musea. 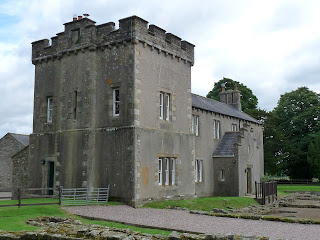 At Birdoswald, which has been occupied by people without interruption for nearly 2000 years, this mint condition Pele (or Peel) tower can be seen. 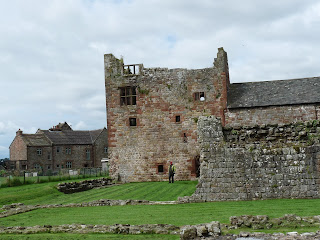 Another one (considerably less mint....) stands in Lanercost. No remains of the wall are found here, since every single stone has been used to build Lanercost Priory and its superseding buildings. Persistent raiding by Scottish Reivers resulted in the destruction and subsequent strengthening of the buildings. Traces of attempts to burn the doors can still be seen inside the ruin.

It gave me much insight in the way these strongholds were built (the one I built is completely wrong and has to be done again...) and what it was like to live in them.

The church still existing in the nave of the old Cathedral holds a touching memorial plaque for two brothers, both of which fell in the Great War within a week of each other, the youngest on the first day of the Somme offensive. 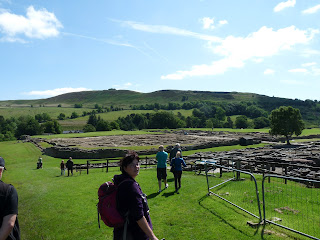 Here we visited Vindolanda, a large Roman frontier fort situated about a mile or two behind the original Wall. Extensive diggings have been done here in the past 40 years and it is reckoned that these diggings will be going onb for at least 200 (!) years before this magnificent site has yielded all its secrets. Visiting the Vindolanda site, the Museum and the Roman Army Museum a few miles West is an absolute must for anyone interested in the period. Fascinating details have been found there, for example the wooden "postcards" the soldiers and civilians living here received from other parts of the Empire. 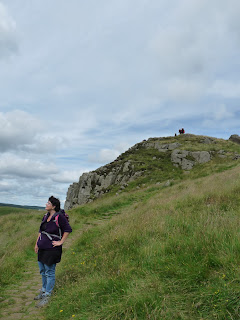 What it must have been to stand at watch on the Wall in these remote areas can only be imagined, but in spots like these one comes close. The stoney ridge in the upper right is actually the Wall, here photographed at the Sycamore Gap and perched high upon a bare crag overlooking what must have been desolate moors and peat bogs as far as the eye could see in those days. 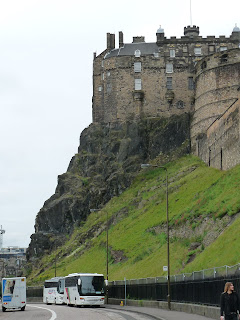 We finished our trip with a two-day stay in Edinburgh. Above Edinburgh Castle presents it southern outcrop. Taking pictures of the Castle was neigh to impossible due to the hideous steel construction meant to house spectators of the 2012 Military Tattoo build over the square in front of the castle. As the place was crawling with (other) tourists, we quickly took to our heels. 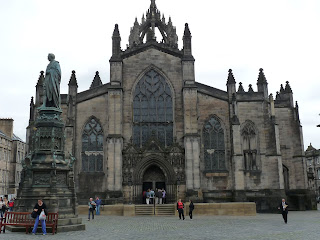 We visited St Giles Cathedral as well. Beautiful music﻿ and windows as well as the tomb of the Marquis of Montrose and memorial plaques for a great number of battles and campaigns; the Atbara, Khartum, Jutland, Ypres, The Somme and various colonial campaigns in India and the Northwest Frontier. 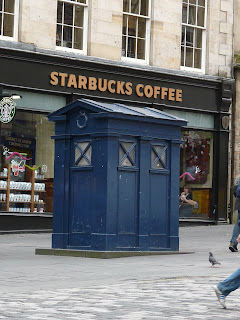 When sitting for some coffee in the Old town I spotted this conspicuous contraption standing semi-innocently in the middle of the street. Passers-by ignored it, but then they would, wouldn't they...?

It was time to head home before anything weird happened.....

But I came away with quite some loot: The Reivers by Alistair Moffat and a very prettily illustrated edition of "Reivers" by Keith Durham and the late Angus McBride. And finally a DVD with the documentary The Debateable Lands! Yum yum....
Geplaatst door Pijlie op 8:38 PM 2 comments: