No more Pijlie on TMP

After a public discussion on The Miniatures Page about moderating between the TMP Editor and myself he felt compelled, for reasons unknown to me, to lock my account. That means I can no longer post on TMP and am no longer able to contribute to the forum and post links there myself. It is unfortunate, but I can't change it.

All readers from TMP remain welcome here of course. I did not, after all, leave.
Geplaatst door Pijlie op 11:28 PM 5 comments:

In memoriam: Aart and Hans

The past 15 months of my life have brought some particular highs and lows. Among the latter were, alas,  the deaths of two old and dear friends.

Such events point things out to you. When you don't give them their due attention because you are busy with your  job and all kinds of practical and urgent matters these things tend to catch up on you eventually. And when they do this, you should make some room for them and take some time and space to do what you should have done in the first place: put it in perspective and give it a place.

On June 2nd 2013 my friend Aart died of heart failure. We had been friends for over 25 years. Peculiarly enough we met around 1986 over a wargame, a big Wooden Ships & Iron Men game representing the Raid on in 1667. He was a driven reporter and historian but only a lackluster gamer. His enthusiasm for the game stemmed from the history, not the other way around. For some reason, for we were very different, we stayed in contact for a few other games and  then, when his interest in games waned, just because of our mutual personal interest in each other.

This contact was not always very frequent. Sometimes we didn’t see each other for a year. He was passionate to a fault about his profession and sacrificed a lot for it, including a regular lifestyle. But we always kept running into each other one way or another. For example, sometime in the early 90ies I bought a few second hand books, only to discover at home that two of them had his Ex Libris in them. Too many pictures, not enough substance, so he sold them off for something better. Me, I like pictures.

Our mutual interest in history led to a trip along the West Front of the Great War in 2000. We travelled from to , visiting cities, graveyards, memorials and musea along the way. I wil never forget how he got us into an excellent hotel in Ypres (after our booked hotel had given our room to a group of British tourists) and managed to get the curator of Flanders Fields Museum to drive us around in the countryside for an impressive afternoon. At the graveyard at Warlencourt we read the visitors book and both got something in our eye at about the same time. The cold wind, you know…

Despite his often tumultuous lifestyle we never lost contact over the years. Our differences in outlook just seemed to reinforce our mutual interest. Eventually his life calmed down somewhat and somewhere in 2010 I managed to get him and his sons to play a war game at my home. His sons probably thought it an OK, if somewhat nerdy pastime but he must have been struck with a yearning for a hobby I never would have thought him capable of. In 2011 he invited me and a couple of friends to a game at his place (did he even have armies?) and completely flabbergasted all of us by presenting a fantastic Kursk table, completely, up to and including the tanks and vehicles, built with a talent for scratch building I never knew he had!

From then on we shared our hobby as well. He seemed to have arrived in a phase of his life where he was happy in his new marriage and nevertheless had room for trivial passtimes like wargaming. We made big plans, tried out rulesets, painted armies and, despite his declining health, played some great games together. Knowing his health was bad, his passing away still came as a shock. For some time after his death packages kept arriving, containing figures he had ordered. He had obviously hoped for more time. One of the last was, ironically enough, a pack of 17th century warships. Apparently he was contemplating again. Life had come full circle indeed.

The aftermath of his death took up much of my energy and attention but when I was doing something related to his death, it was usually to arrange something or dispensing some advice to someone. The emotional side somehow got parked somewhere in the back.

Then, May 22nd of this year my friend Hans unexpectedly died from complicated pneumonia. We had known each other since 1992 and met to play Battletech, a new game then! In the 22 years that followed we became friends and, unlike Aart, we met very regularly. For years he would visit on a weekly basis, usually on a Tuesday, to have dinner at our place and play games afterwards. So regularly in fact, that even now, when I put out the trash bin on Tuesday night, which I usually did on game nights after he left, it still reminds me of the games we played.
We too, were very different. He, a long-time bachelor and freelance contractor living in the City and me, married with children and a steady job living in Suburbia still found plenty to amiably disagree about.

He watched our children grow up and became a member of our family in a fashion. It was not always an easy friendship, for he was not always an easy man, either for himself or for others. He always had to be at least as good as anyone else, while competitiveness for me is a professional trait, not a personal one. But there was enough to unite us, as we played our games, discussed movies and books, got drunk together and stepped in the wrong train together because we were distracted by that beautiful blonde that just got out…

Having always considered him a quite conventional man, he completely surprised us by meeting and marrying his wife and completely surprised us again by becoming a father. Especially the latter brought up new sides of him I never suspected were there. He might not have found it easy to be a father, but he evidently found love and joy in it. We had vague plans to restart a Necromunda campaign when he was admitted into hospital with a rather bad flue. We simply decided to postpone our date. As it turned out, he never left the hospital and we never got to play again.

I wasn’t able to attend his funeral. But despite this he left me a very special gift. By making me mourn  him, he made me realize I never really mourned that other friend. Mourning is a genuinely selfish thing to do and it does take up time. I am no altruist, but I do tend to get action-oriented when the need arises and this tends in turn to neglect the emotional side of things, always more complex then just doing stuff.

I will have to find my way around it, I learned. Writing this piece is one way to do that. Telling you, reader, that you should cherish your friends is also a way to do that. The things you share with your friends are too common to really appreciate while everybody is still around, but they are precious nonetheless and for the most part irreplaceable once either one of you is gone.

“Understand that friends come and go, but for the precious few you should hold on. Work hard to bridge the gaps in geography and lifestyle because the older you get, the more you need the people you knew when you were young.” Mary Schmich wrote this and it is very, very true.

Guys, it was great to know you. I miss you. I thank the both of you for the times, joys and wisdoms we shared and wish friends like you on everyone.

I am in no hurry to join you but save me a spot, wherever you are. 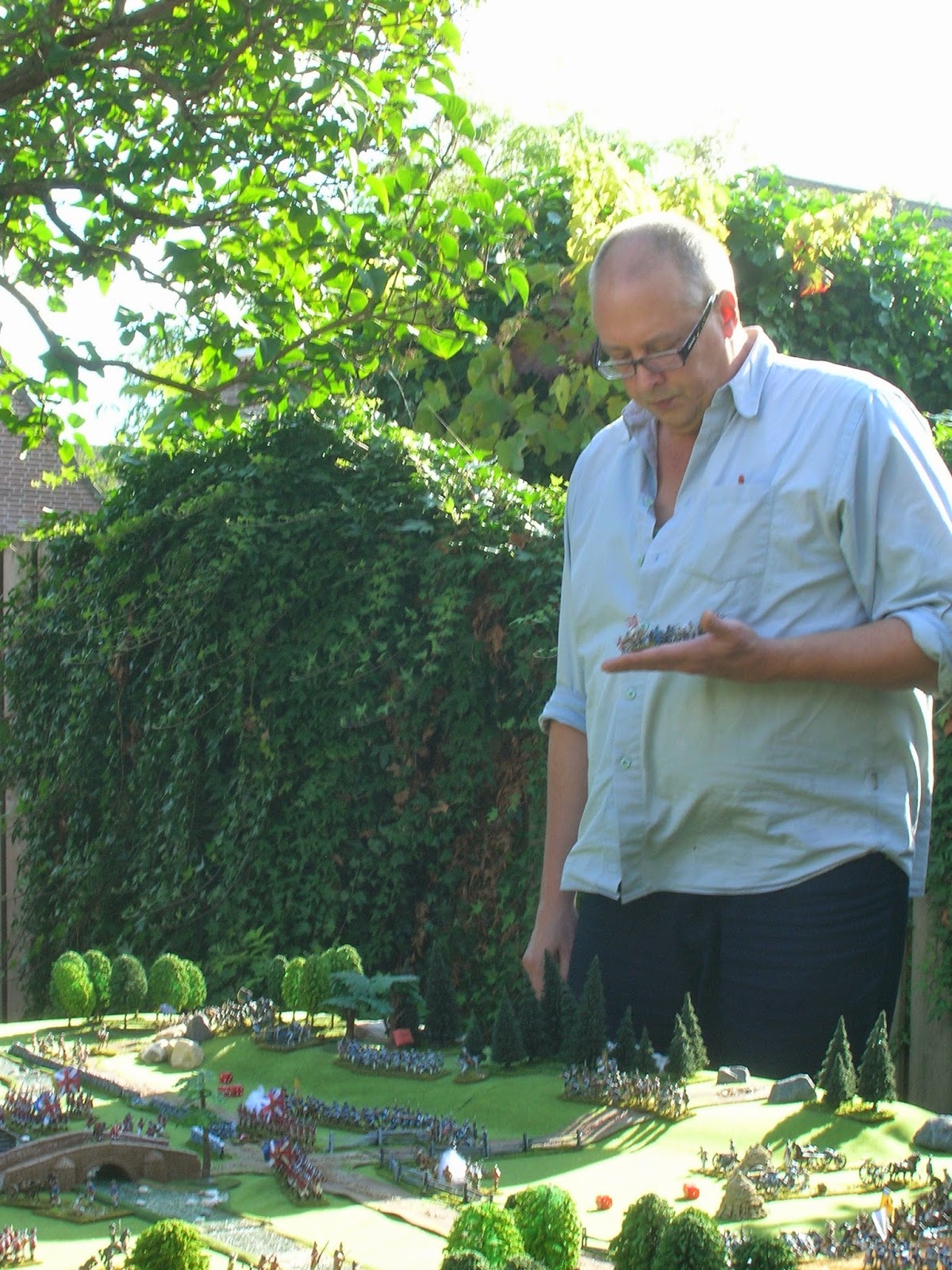 Email ThisBlogThis!Share to TwitterShare to FacebookShare to Pinterest
Labels: In memoriam

Shortly we will start the Chain of Command Black Gold Campaign from the Too Fat Lardies summer special and I am looking forward to it! Of course some stuff still needs to be painted for it and I am working hard t o get it all finished in time. This blog will get added to in time as more stuff becomes finished. 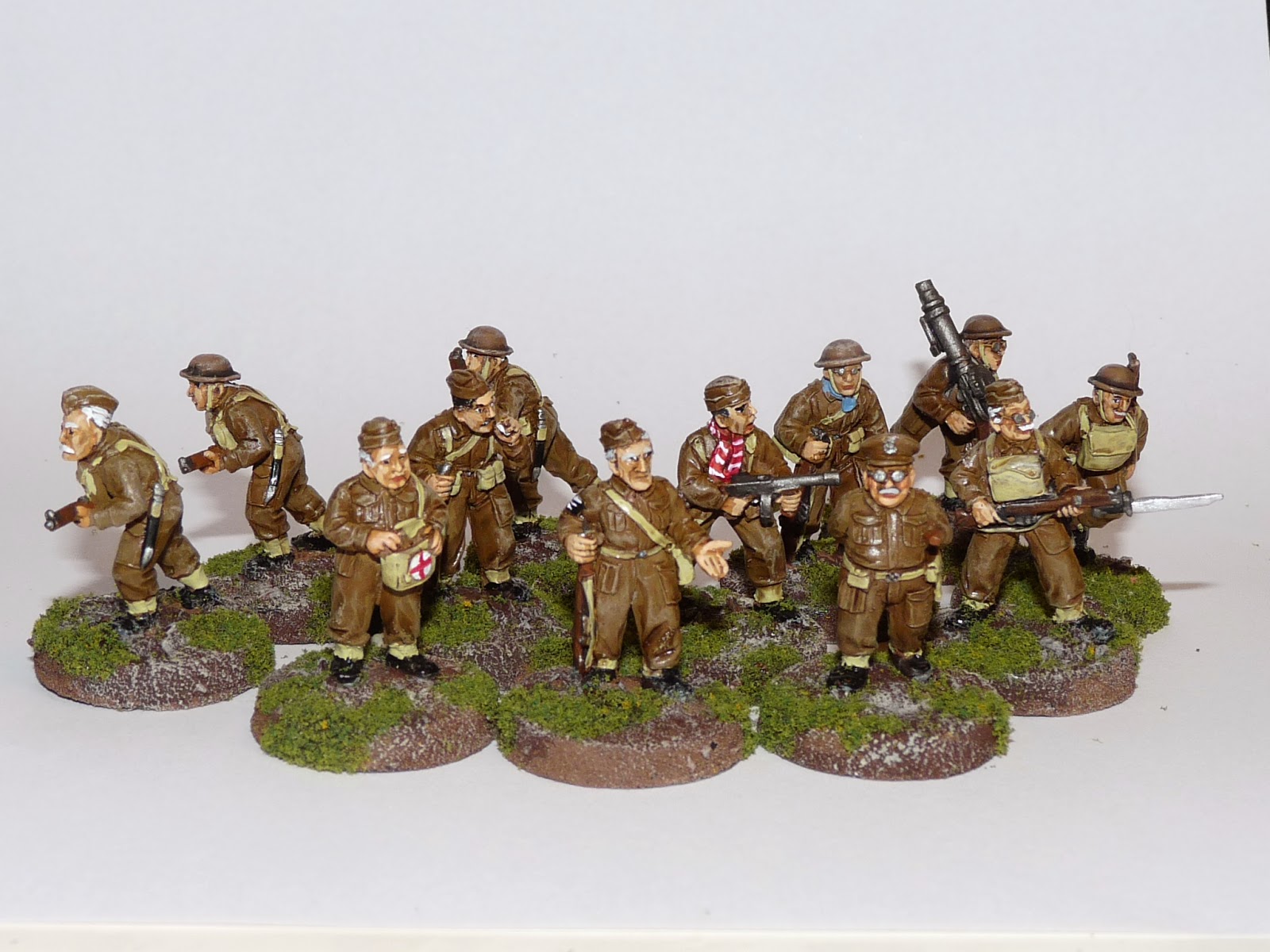 First of course are the Home Guard and their Elite opponents, the German Fallschirmjaeger. Home Guard are mostly Foundry figures with some Crusader thrown in for the support weapons. Lovely figures all around. 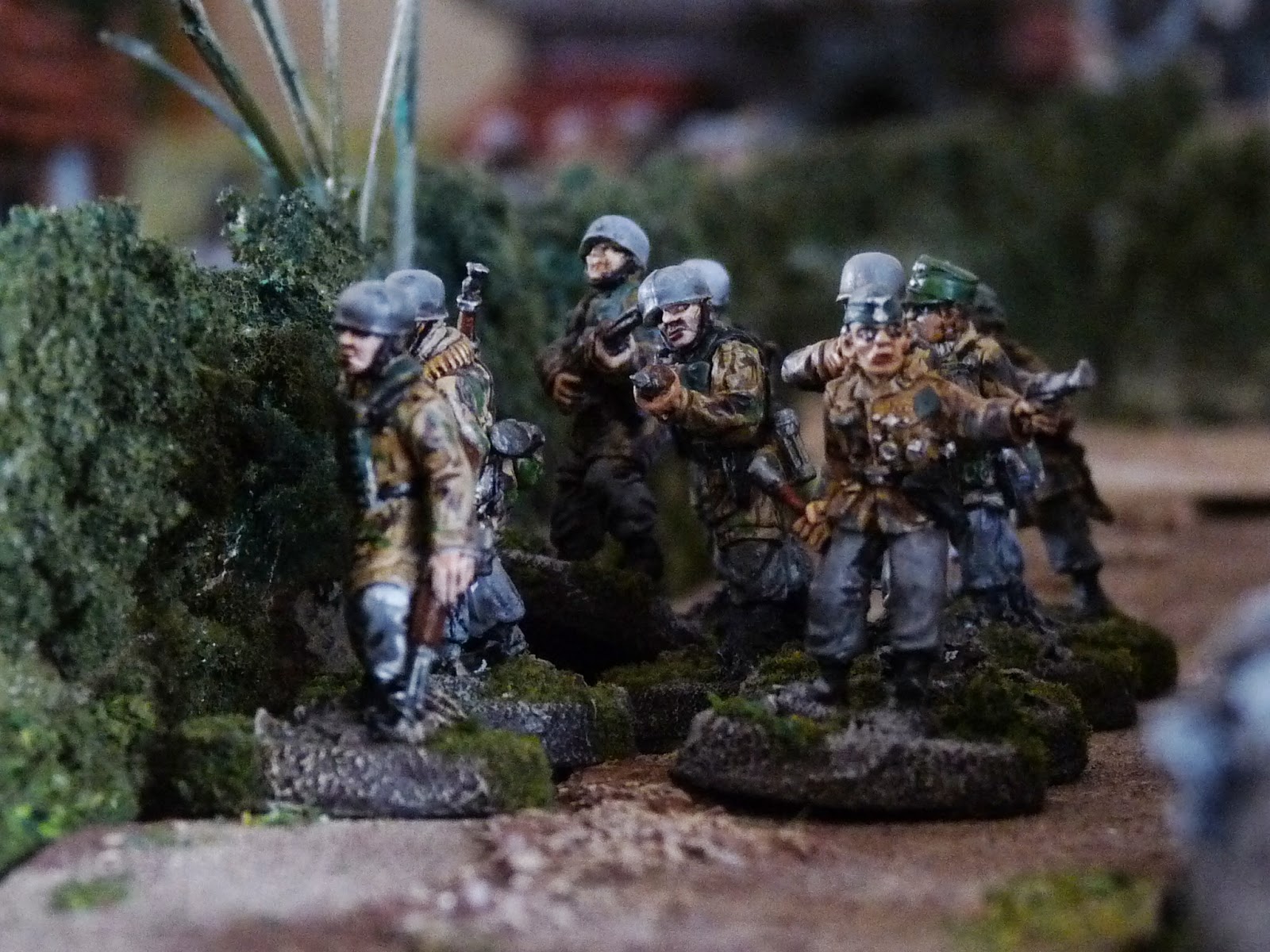 The FSJ are from Black Tree Design and Warlord Games. While the BTD will not win any sculpting prizes, they are crisp and clean. The same cannot be said of Warlord Games. There was flash all over the place and I had to hack, cut and file for ages to get it all reasonably clean. Some displaced mold lines were beyond saving, but I hope the painting will mask it enough to pass for tabletop quality. 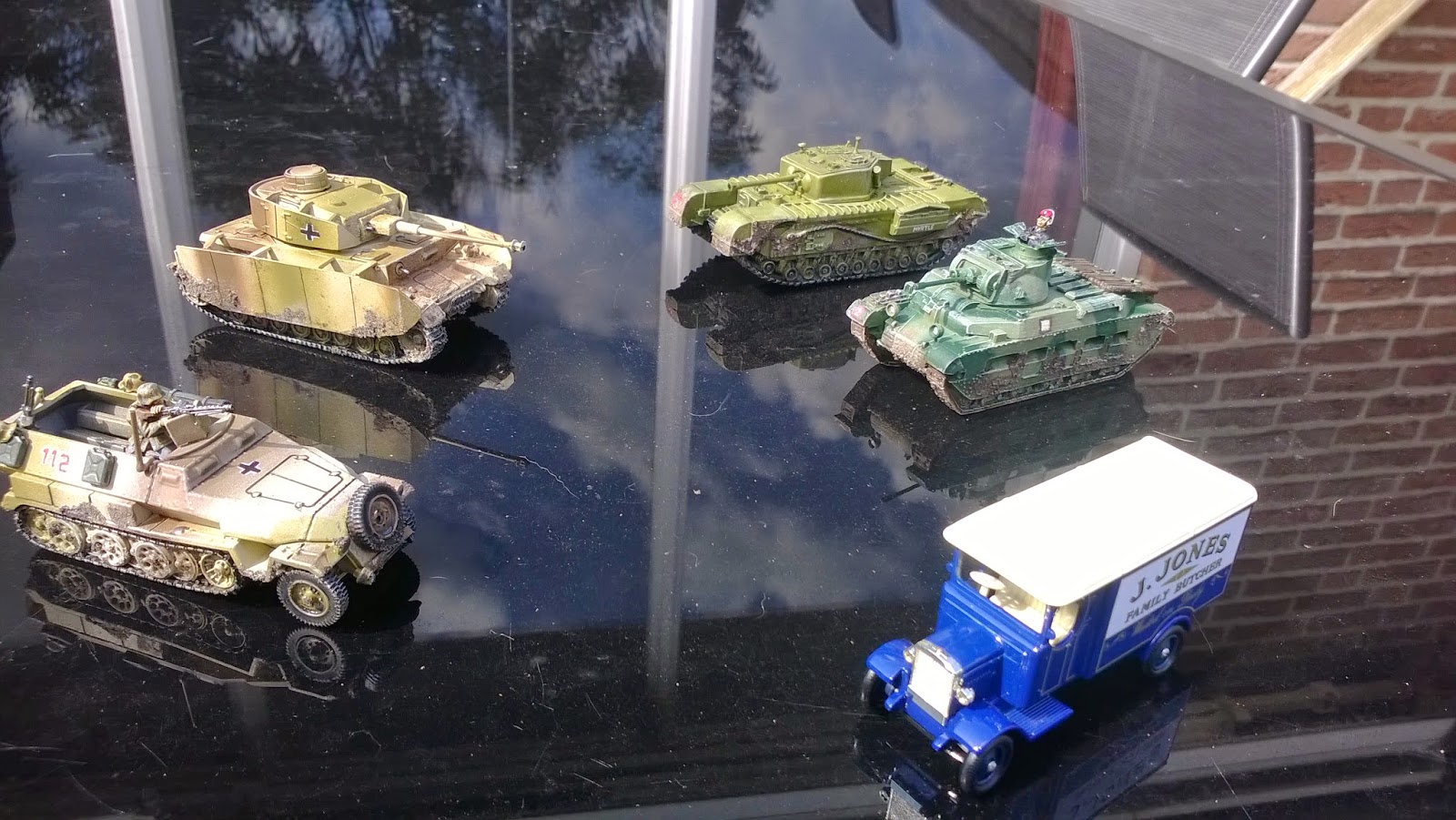 The rolling materiel.  All vehicles are by Warlord Games except the British "APC" that is made by Lledo. 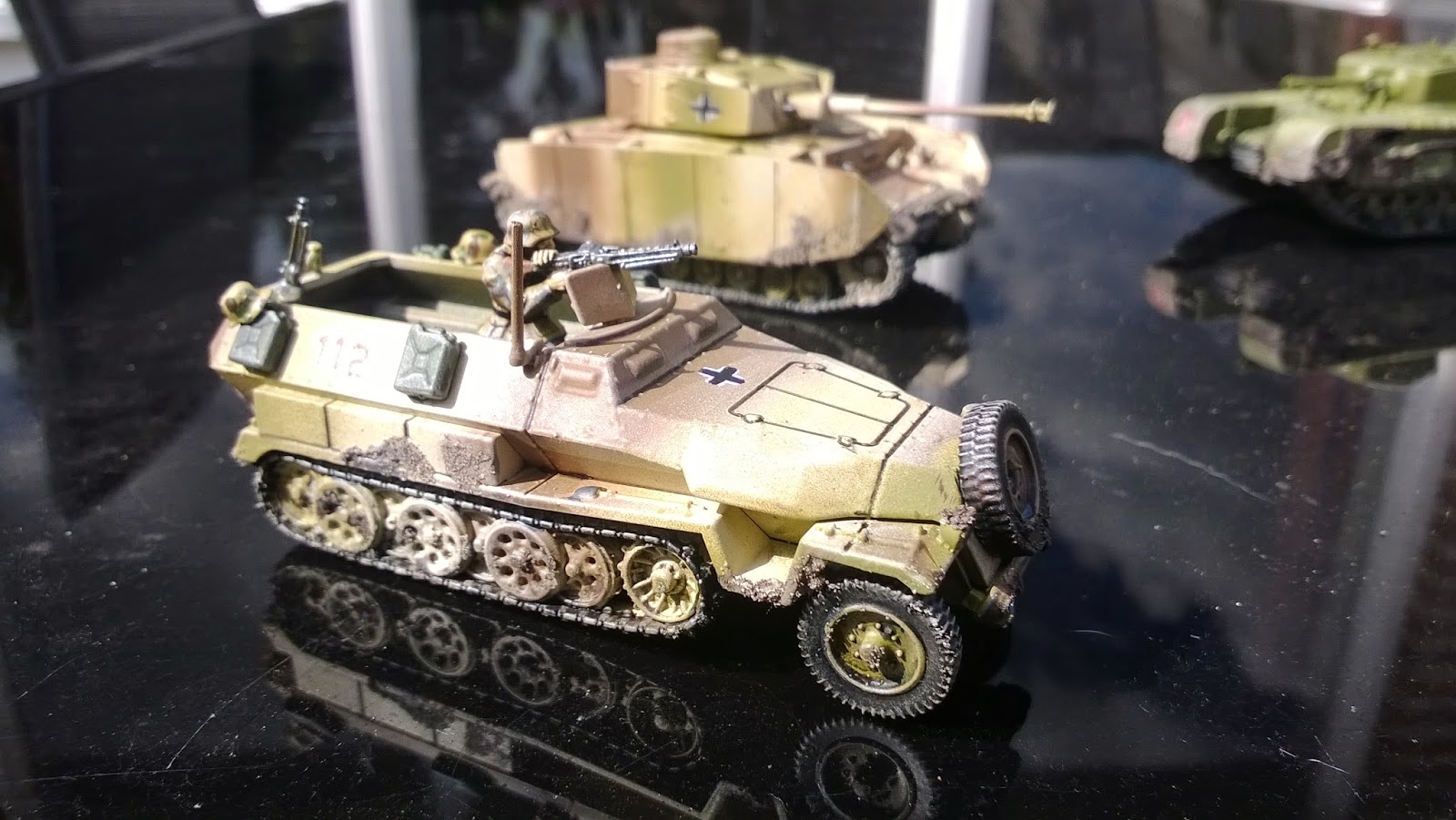 The Warlord SdKfz 251. It is a plastic kit that buildis easily and fits perfectly/ Detail is a bit shallow in places (the rivets in the armor for example) but it comnes with a lot of extras like a MG42 firing crew member (that will do handily as a "Crewed" counter, jerrycans and blanket rolls. 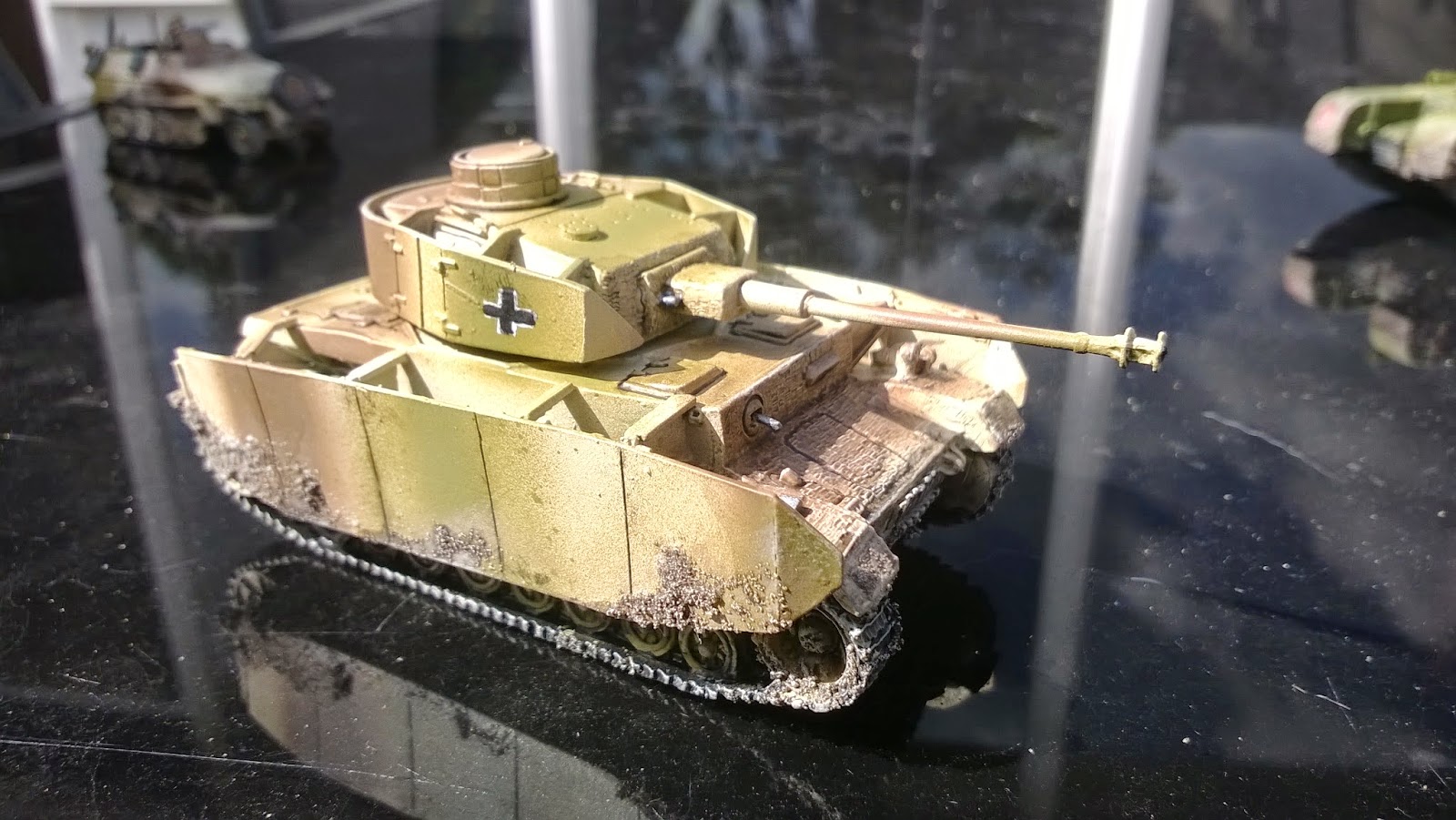 Warlords Panzer IV was a bit of a disappointment. It came with Schurzen that were rather fiddly to assemble and didn't fit very well. There was a diminutive and very ugly tank commander with a loose and ill-fitting head that I simply ditched out of despair and the gun barrel was slightly bent. It's very rigid metal and I did not dare try and bend it so I chose not to attempt it. 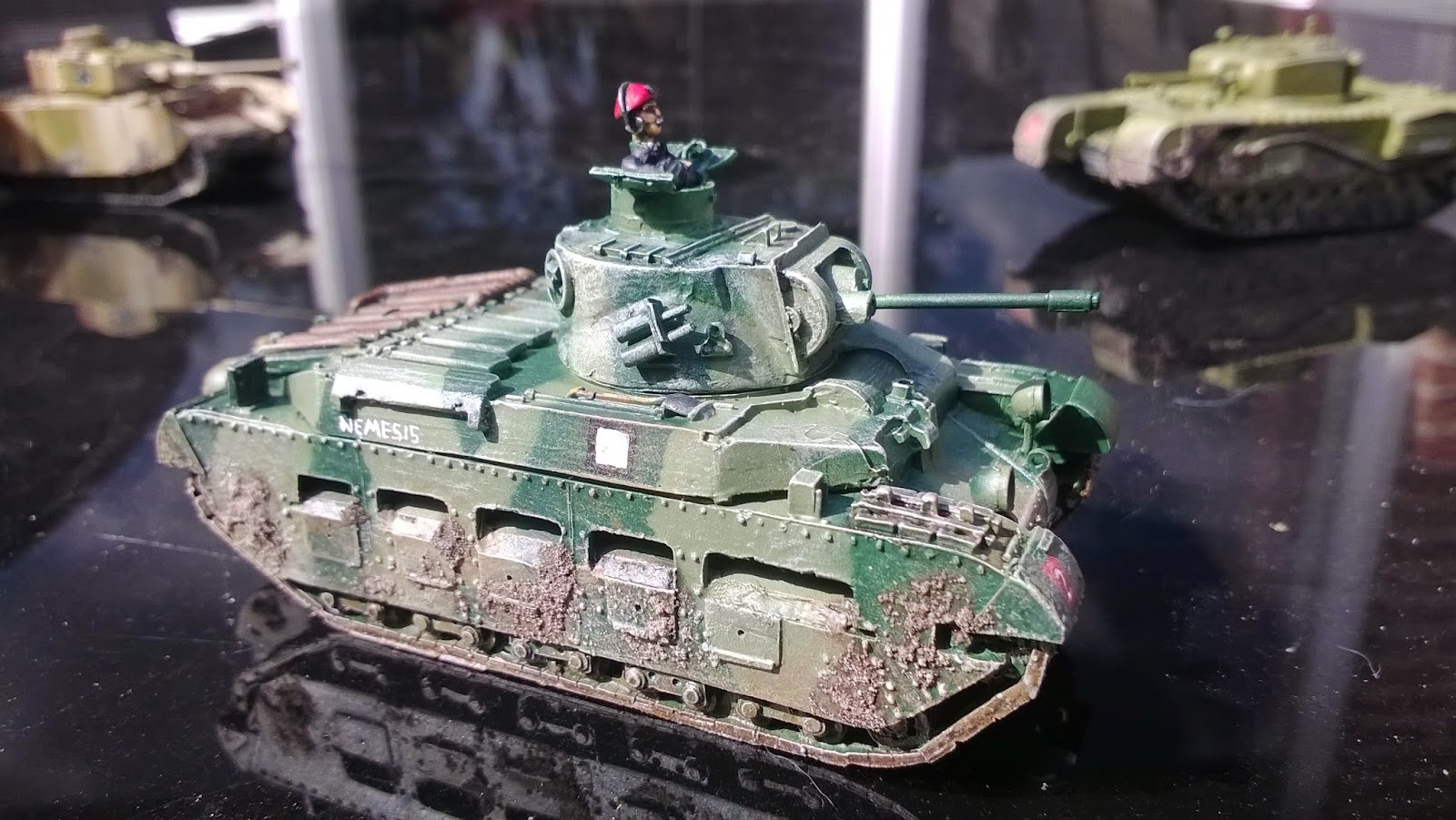 If there was one tank that I had to have for my Home Guard it was the Matilda II. It's lovely archaic looking, endearingly badly equipped with its puny gun and it can survive for a while nonetheless because of its armour. Here too the fit was dodgy in places and I had to conjecture the assembly from historical photos and use a lot of green stuff to get it reasonably in shape. The fit between side armour and tracks is still off, but it was either that or destroy the rivet detail. Still I am happy with the end result . 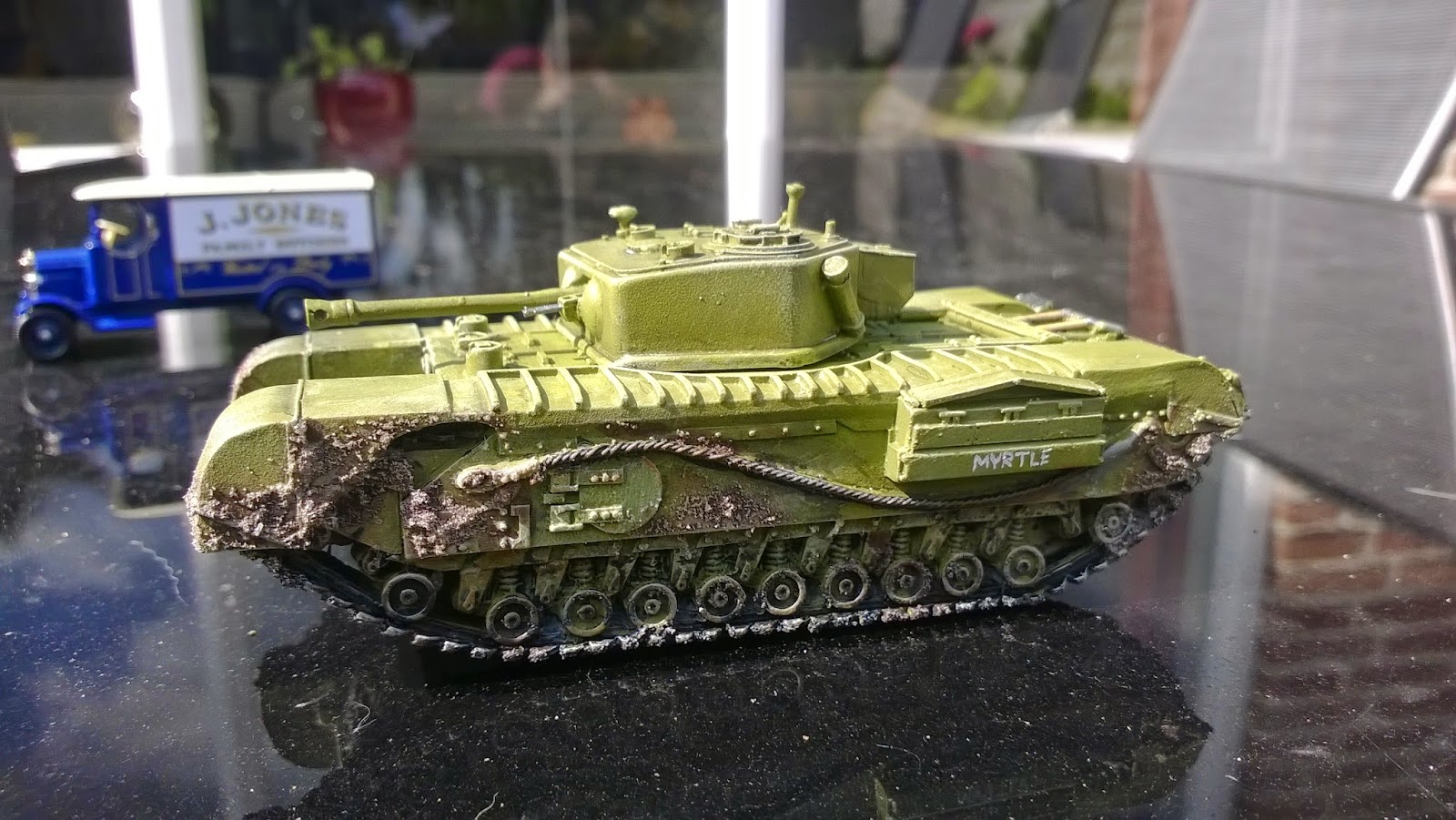 The next is a British Churchill infantry tank. No regrets there. A nice model with crisp detail and good fit. 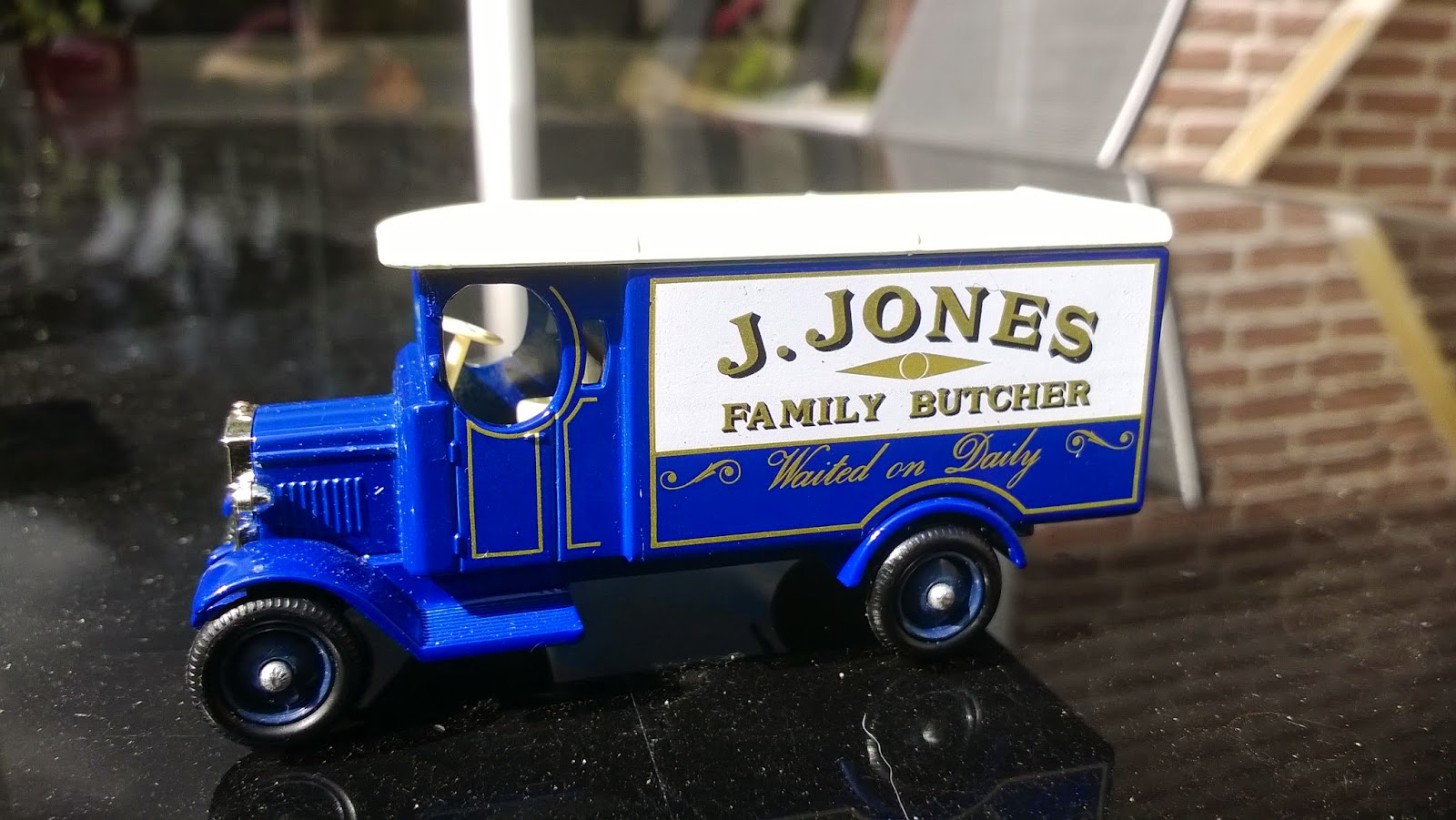 I chose the Lledo butcher van for a British "APC". It was a must really. These trucks can be had for varying prices on Ebay. Mine was 6 GBP, so not too bad. At 1/48 it is a bit too big but not disturbingly so. I chose not to paint it as it looks just fine, straight from the box.


I had to scratch -built some of the more exotic Home Guard support weapons. Below are some historical photos of a Blacker Bombard (left) , a kind of anti-tank grenade lobber, and its smaller cousing the Northover Projector (right) 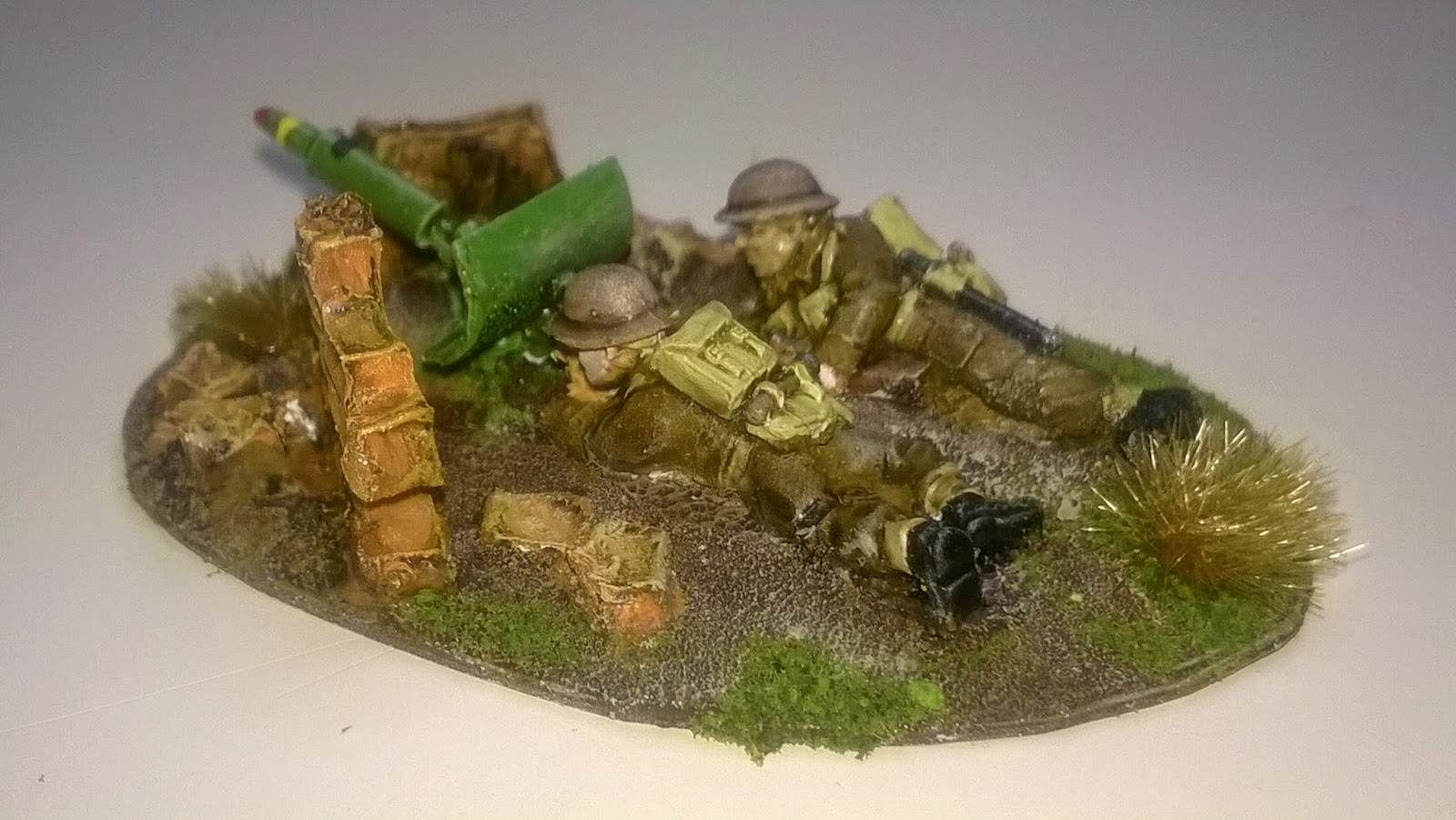 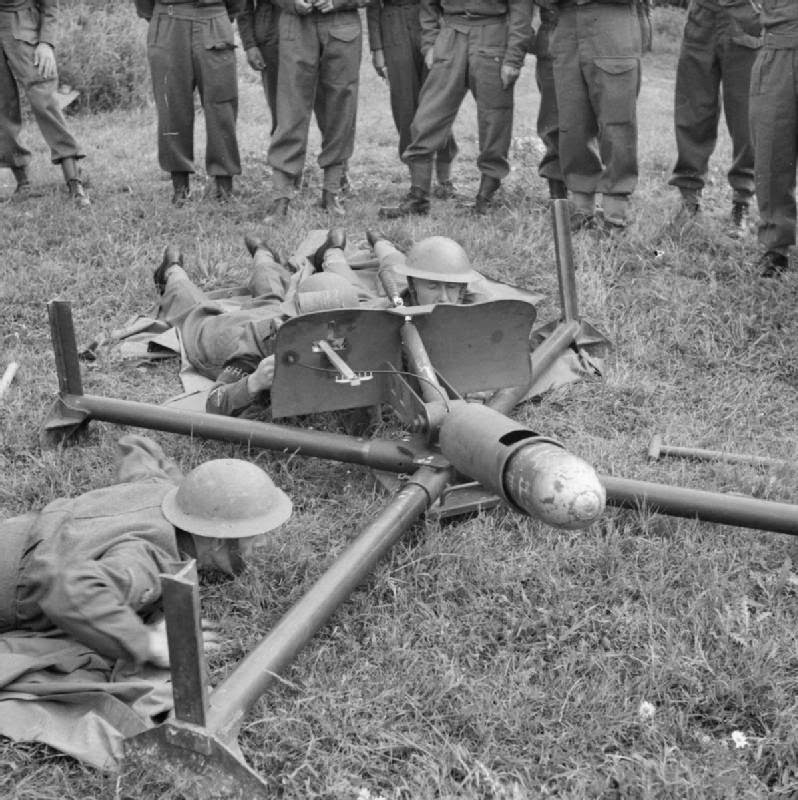 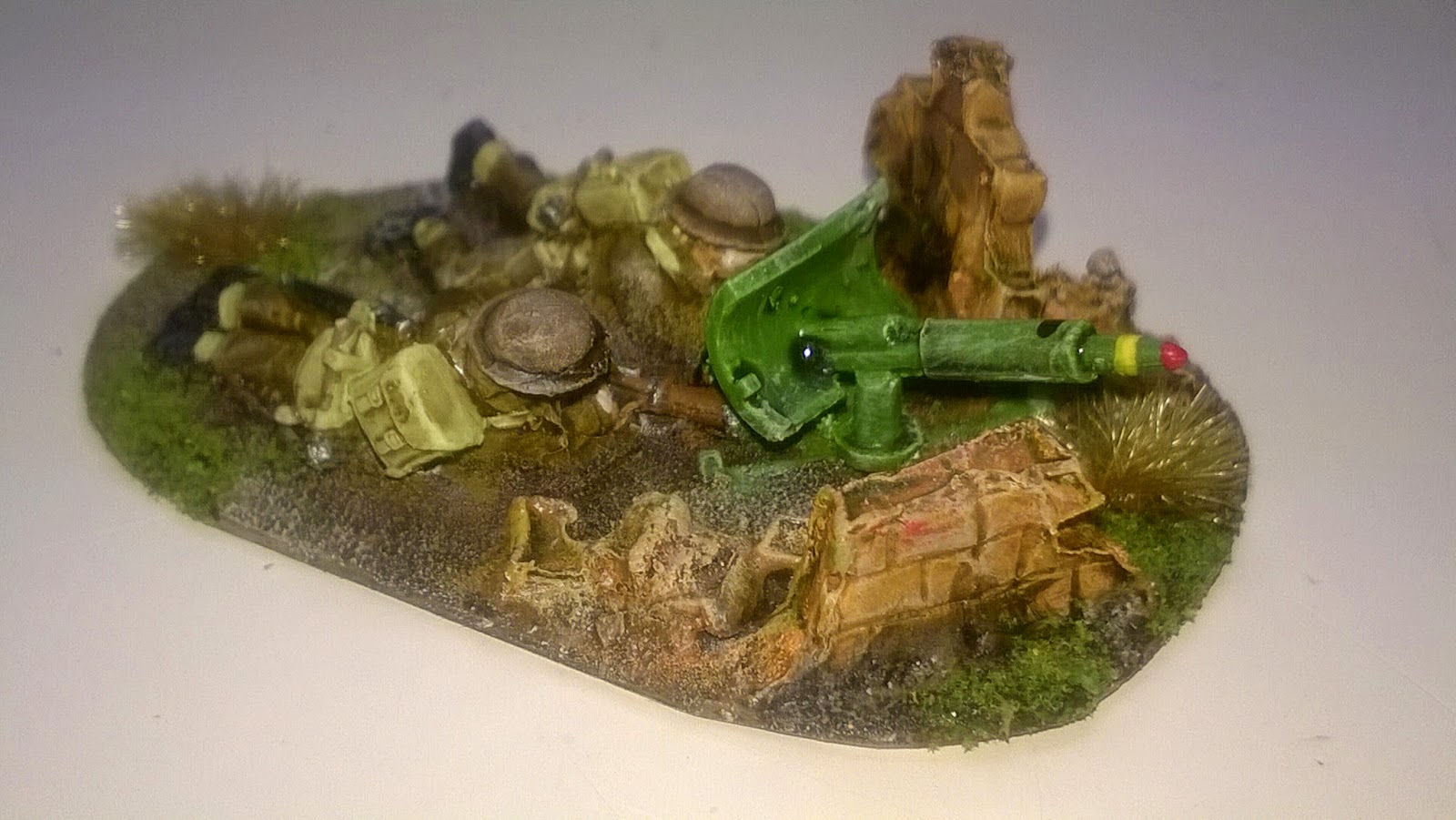 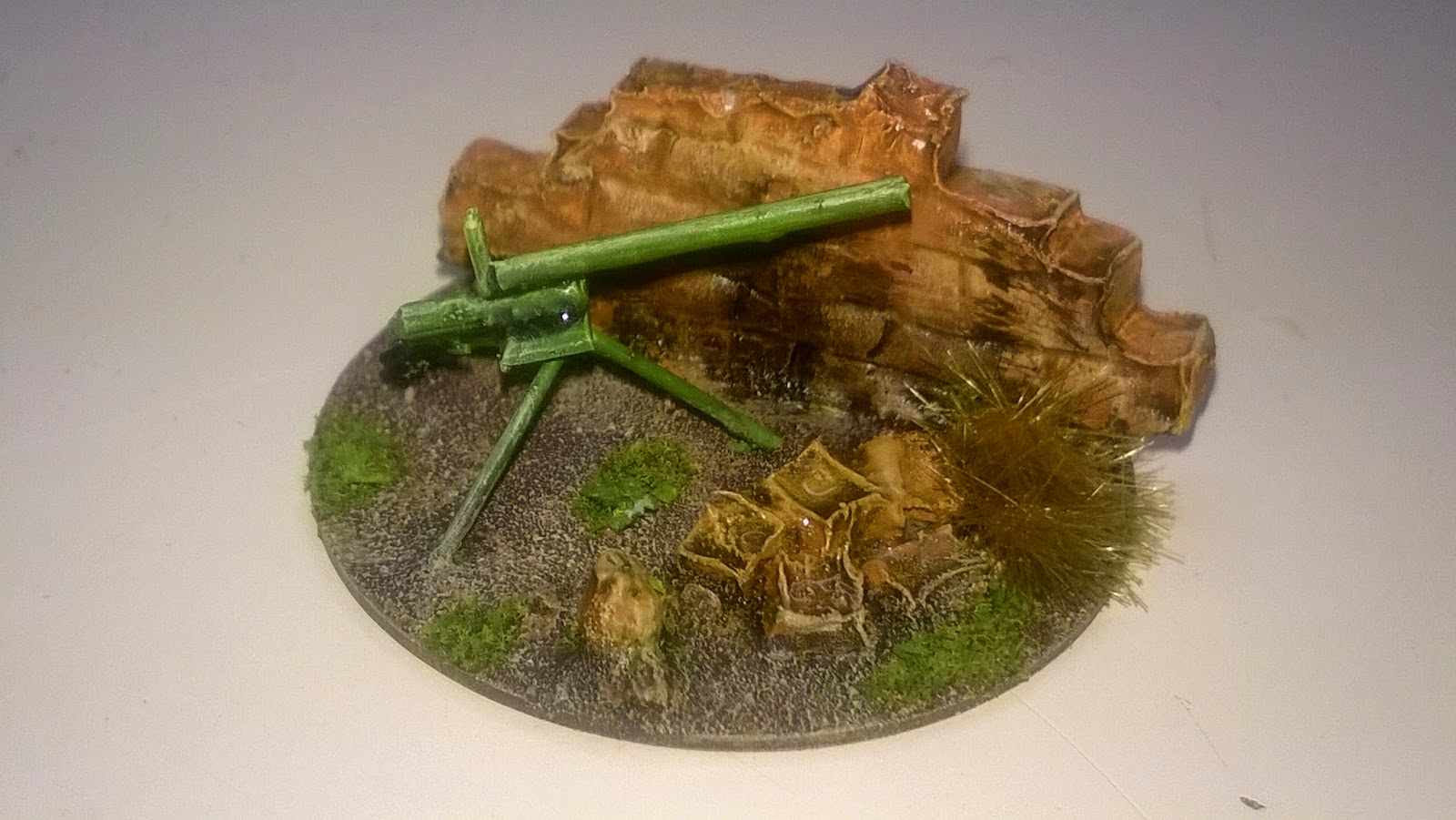 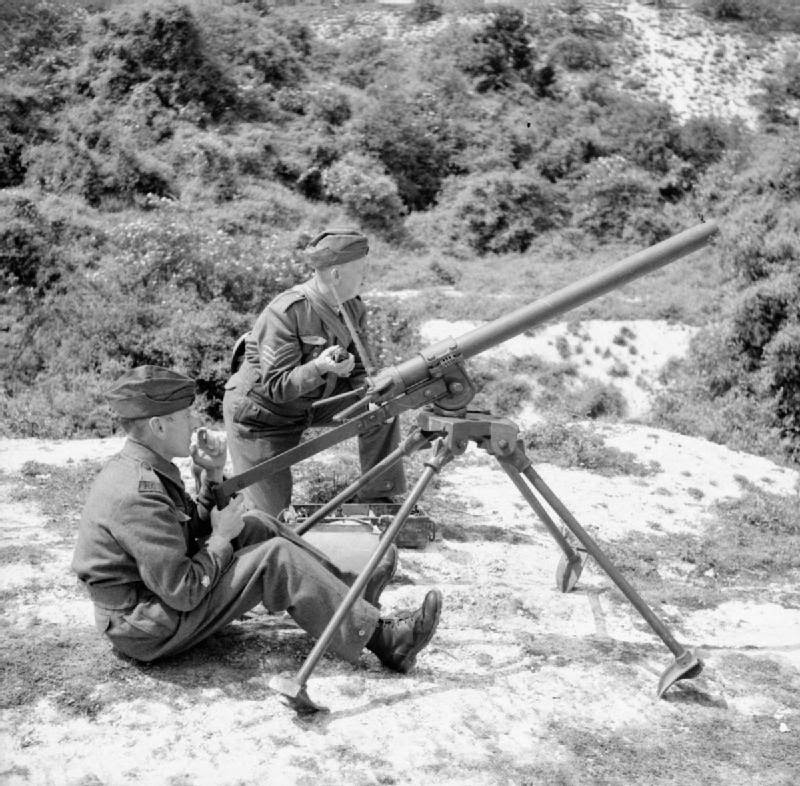 Added are pictures of the scratch-built Blacker Bombard (figures were a Boys ATR team by Crusader miniatures) and a Northover projector below.
Geplaatst door Pijlie op 9:45 AM 1 comment: