The mission
Six commandos and a CIA operative must rescue 2 captured diplomats. The diplomats are held in a remote jungle facility. They must be secured if possible. The commandos must then retreat to the LZ and evacuate. 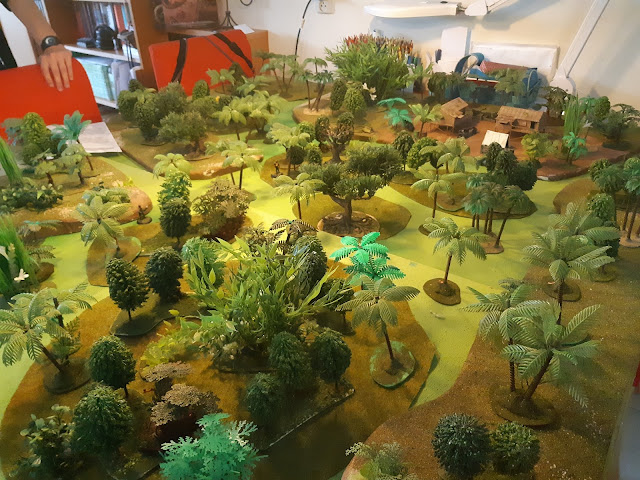 Deployment
Guerillas deploy first in the base. Commandos deploy for assault and have Initiative in the first round. Alien deploys after the assault is finished anywhere on the table between the commandos and the LZ. 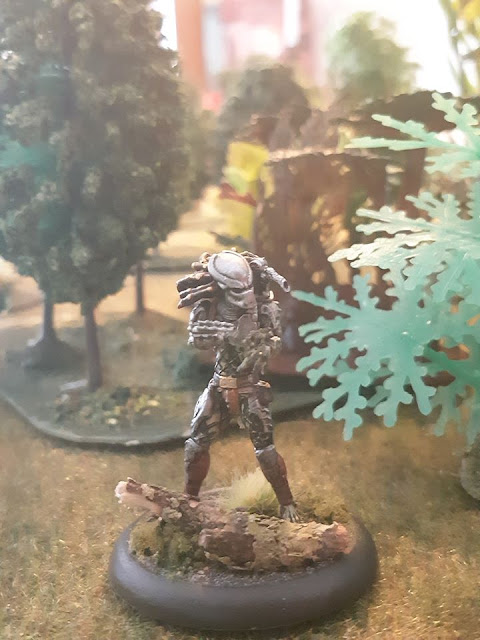 Victory Conditions
The commandos need to reach the LZ with as much men as possible. The Alien must prevent this.

The Alien wears a Shimmer Field. This means it is Hidden until Revealed (even when moving or in plain sight). 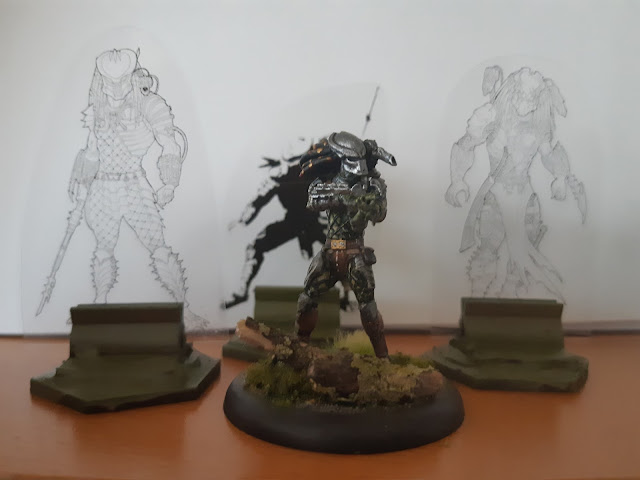 Because the Field resembles the background so much, it is represented with three Decoy counters. I used three identical drawings of the alien printed on transparent sheet and based upright to represent an alien in a Shimmer Field. 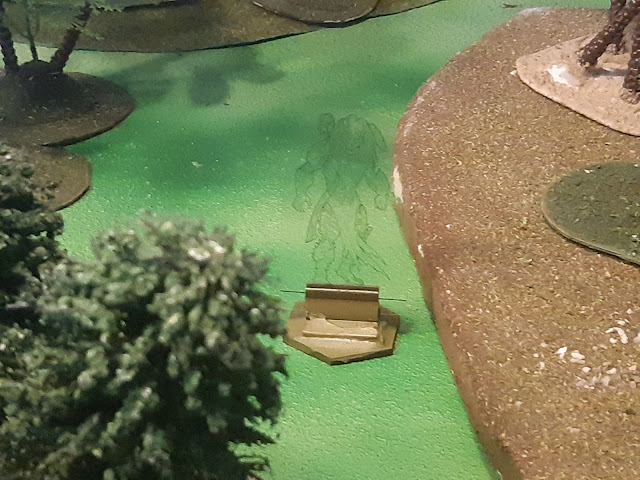 The Alien moves all three counters when moving. The Alien player notes which counter is the real Alien. When playing with Decoy counters the Alien always wins Initiative. Successfully Scanning a Decoy counter will reveal it for what it is. The decoy counter is then removed from the table if a fake or revealed as the real alien. In the latter case the other decoys are removed.

If a Revealed alien manages to move out of LOS at the end of a turn, it will regain the three decoy counters at the start of the next turn in the spot where it vanished from LOS. It is then Hidden again.

The Alien will be Revealed by a successful Scan, Detection, by shooting, throwing spear or net or attacking in Close combat. When Revealed the Shimmer Field counts as a Ghillie suit with a +2 DC.

When the Alien is hit while wearing a Shimmer suit roll a D6. On a 4+ the Shimmer suit is damaged and will not work for D3 turns. The alien loses the decoy counters and the DC bonus for the duration.  When damaged for a second time while inoperable the Field is destroyed.

Alien Toughness
The Alien is a very hardy creature. It will ignore the effects of Stuns and Light Wounds (but they will count for the Wound Total) and only suffers an automatic kill after three wounds.

It has a Medkit that functions as a Medic, stopping the effect of Bleeding and lowering the Wound effect by one level.

The Alien may not attack unarmed civilians. The commandos never count as unarmed.

Advances sensory mask
The Predator is equipped with a multi-spectrum vision enhancement mask, counting as both a Night Vision and Thermal Image Device.

Self-destruct (Alpha only)
If suffering fatal injury, the Predator will initiate an automatic self-destruct mechanism with the following profile: LTY: 1+, Incendiary 10”, destroys all equipment and personnel in the 10” blast radius, vehicle are hit on a roll of 2+ and roll on the Vehicle Armour Penetration table with a +2 modifier. Burns for D3 turns.

How it played for us
To be honest we skipped the part of attacking the guerilla base. We spent too much time chatting. So we started the game with the hike back to the LZ. The Alien (i.e. my son...) ambushed me in turn 2 and fried Hawkins. In the turns that followed I took several shots at the thing but missed. It kept disappearing an re-appearing and killed Poncho, Blaine and Dillan before Dutch managed to hit it with  his underslung grenade launcher and killed it outright. Unfortunately everybody but Dutch was too close and got killed in the autodestruct blast. He got to the choppa....

Many thanks to Ivan Nylander who created the original Predator profile, to be found on the Spectre Operations Facebook page. I took the liberty of altering it somewhat to better meet my image of the Yautja predator hunters and their weapons.
Geplaatst door Pijlie op 8:47 PM 4 comments: