In an attempt to design search-and-capture crowd pursuit rules I reworked my original Mob Rules.

Comments and test results are welcome (as soon as social distancing distances itself of course...) 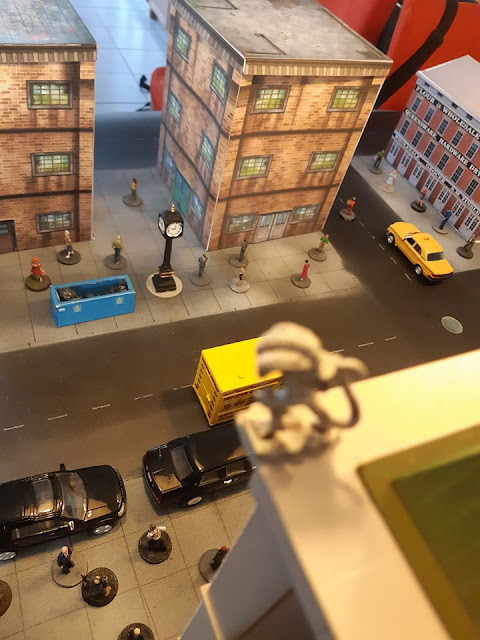 The aim of these rules is to use mobs of people as moving terrain where one can hide in and that can obscure Targets. At least 30 Civilian models for a 3x3 feet table are needed and more will work better.

Before play, the Hiding player secretly nominates 1 civilian miniature per hiding figure (which should be individually identifiable by appearance or number written on the figure somewhere) and secretly links each specific civilian figure to a specific player figure under his control. The Hiding player may also secretly nominate flight cars, which include a driver. Flight cars may be parked or driving around.

All civilian figures and cars are then placed on the table by the Pursuing player, evenly spaced. Cars are placed on roads and parking places, pedestrians on sidewalks, crossings and/or in public buildings and spaces.

At the start of each turn the Pursuing player may move any number of civilians and/or cars a maximum distance of 4 inches in any direction. Cars stay on the street. Pedestrians follow the normal routes i.e. sidewalks, street crossings etc.

Then the Hiding player may move up to 5 civilians and/or cars per Hiding figure a maximum distance of 4 inches in any direction, with a minimum of 10 figures. Figures and cars that leave the table return the next turn on that spot moving in the opposite direction.

All hiding figures still successfully posing as civilians automatically win Initiative (and may use this to reveal themselves). A hiding figure may reveal himself in any phase. As soon as a hiding figure has been revealed (by an action, detection or a Scan) roll for Initiative for the following phases and turns. Normal Initiative rules apply to that figure from then onwards. NB: Initiative is rolled for AFTER the revealing action has been completed.

The Pursuing player may try to Scan hiding figures before they are revealed. Use the normal Scan rules. However, for any civilian figure in the LOS between the scanner and the scan area apply a -1 modifier for Command. This represents the difficulty of finding someone in a crowd.

The Pursuing player may also attack and capture any civilian figures they deem suspicious.

A successful attack will reveal whether the figure is a hiding figure or not. However this will cause some panic among the civilians. The turn following such an attack the Hiding player may move up to 15 civilians 6”in any direction to represent the panic. An unsuccessful attack will not reveal the hiding figure (unless he wants to) and result in a continuing scuffle of the agent and the civilian. It will still cause panic.

Any exchange of gunfire will also cause panic. Civilians may never run towards gunfire. Hiding figures (revealed or otherwise) of course are under no such obligation.

Hiding figures and Pursuers are usually Alert unless the scenario states otherwise.