Some readers of this blog may remember my review of Conan the Barbarian, a boardgameby Monolith that came out as a Kickstarter a few years ago. Since then Monolith has brought out the Mythic Battles: Pantheon game and has now revisited the Conan game engine in spectacular fashion with a board game called Batman Gotham City Chronicles. 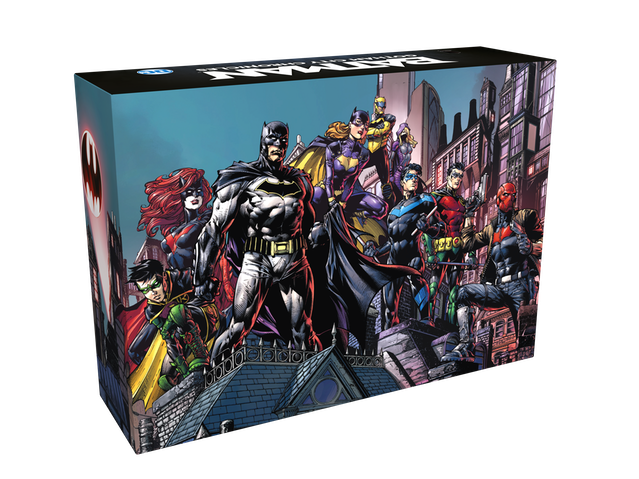 Over 19.000 backers funded a licensed boardgame of Gotham's much needed (but not deserved) hero, the Dark knight, the Caped Crusader or whatever you may want to call him. Since this game will be available again from June 4th onwards, alongside the eagerly awaited Season 2 of the Batman Kickstarter I thought it only proper I'd write a review to make everyone who hasn't already bought into Season 1 reconsider. Mwuhahaha! 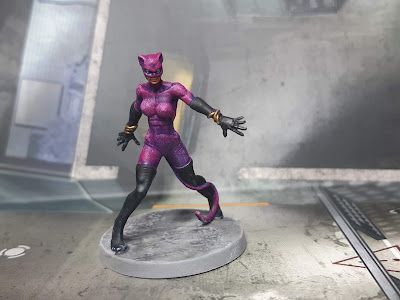 Learning curve
In the release of Batman, Monolith has shown to have learned much since Conan, not least in logistics and organisation. One may recall Conan was delayed for more than a year but Batman arrived exactly in the period that was promised. And, coincidentally, in time for my birthday. 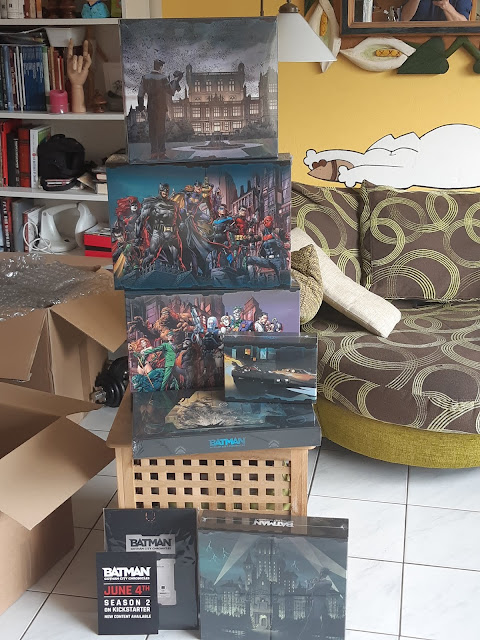 Also, Batman offered an all-in-one buy deal that included all stretch goals (free Kickstarter "rewards" that become available as the funded amount rises above certain thresholds) as well as all available add-ons. This avoided the Conan KS problem of people not being able to afford all add-ons in the KS and hoping to buy them later only to discover some sets would never be released in retail (bye bye Black Ones…)

But the game itself showed many improvements as well. Let's visit them below.

Game context
Batman is a semi-cooperative board game for 2-4 players. One player plays the Villain, one to three other players play the Heroes. The game is, of course, set in Gotham City and features the endless crime fighting war of Batman and his allies against the arch-villains and their many henchmen that infest Gotham like rats. The Hero players cooperate against the Villain in mission-based scenarios. 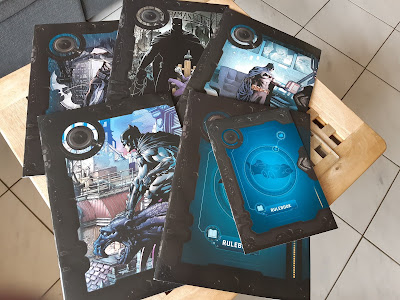 The game offers locations in Gotham to play in as well as Wayne Manor and Arkham Asylum. The Batmobile is included as a game piece, there is a Campaign included and a Versus box through which two players can play against each other in the Villain skirmish mode. But I get ahead of myself. Let's explain more of the mechanics.

Game mechanics
The Hero players control individual characters (and the occasional ally) that must combat criminals and complete missions. They use Character cards that hold all Hero information as well as item cards for weapons, Bat gadgets and such. Skills and equipment enable you to do special things or roll extra dice. An improvement over Conan is that Batman included dashboards that will hold all character cards as well as Energy cubes (see below) conveniently together.
There are many Heroes available in the game and their skills and possibilities vary wildly. Combining Heroes is a skill all on its own. The scenarios usually offer a choice out of a few Heroes per player as a suggestion (which is also an improvement over Conan).

Each Hero has a limited amount of Energy (plastic gems) that enable the hero to take actions. A Hero may take any action he wants in any sequence and as often as the Hero's stats will allow. However, each action costs Energy and when a  Hero's energy is exhausted, the Hero is as well and no more actions are possible. Reclaiming Energy by resting takes time and to keep things interesting Heroes spend Energy a lot faster than they reclaim it! This prompts interesting choices. While a Hero can take a breather instead of a turn full of action, this will still not give him back all his Energy, so energy management is a crucial element of this game. 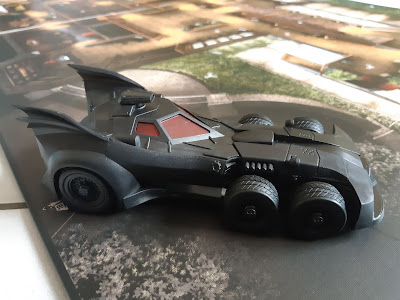 After the Hero turn is done the Villain may direct his Legions of Crime. He has about the same amount of Energy at his disposal as a Hero, but reclaims it faster. This is no luxury at all, since his Energy must power ALL adversaries. This may run up to 10-15 figures, some of which may be reinforced during the game. There are even more Villains to choose from than there are Heroes. Scenarios offer suggestion for Villain forces as a rule.
The Villain uses a Command Board, that is his version of the Character dashboard. The main feature is "The River" where he keeps his character cards. The more to the left a card is placed, the cheaper it is to activate. Once activated. the card moves to the right and can only be activated against a bigger Energy cost. The entire "River" then flows to the left. So the Villain can (twice per turn) activate every card he wants but the Energy costs may vary enormously. Here, too, energy management is the key. 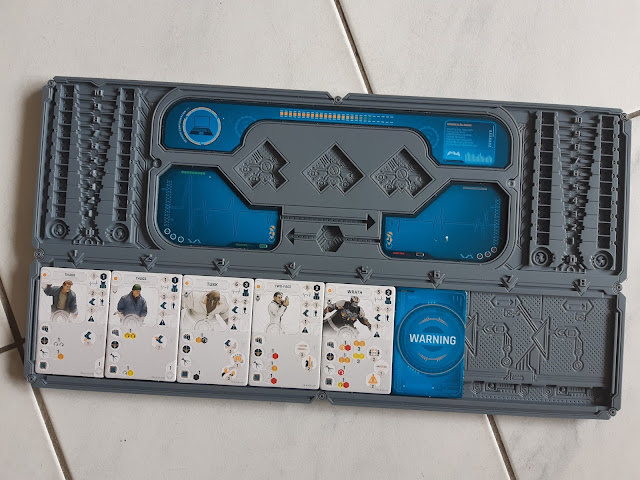 The skill and combat system has cleverly and completely done away with modifiers by using special coloured dice. These come in four colours and some colours are more effective than others. No math is required, just pick the right number of dice of the right colour and roll them!

All this makes for a game full of well-pondered decisions while still flowing fast enough to get that action-packed feel that perfectly fits the rainy streets of Gotham. 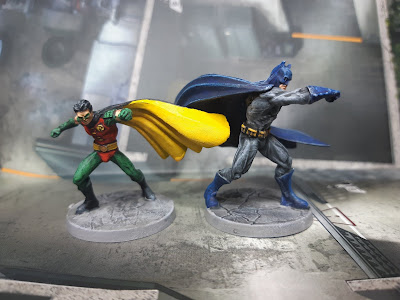 The Versus box, by the way, offers a second Command Board and the possibility for the players to play against each other using a Command Board each (so a unit of characters instead of individual ones) or reversing the game and playing individual Villains against units of Heroes. This too is a big improvement over Conan where one has to buy a second Base Game to acquire a second board.

Game components
The game comes in six boxes that contain all boards, miniatures and game components. Actually it is possible to store everything in the boxes even after punching all the counters (a somewhat rare affair and way better than Conan) but for convenience sake I use a separate counter box that can be passed around the table more easily. 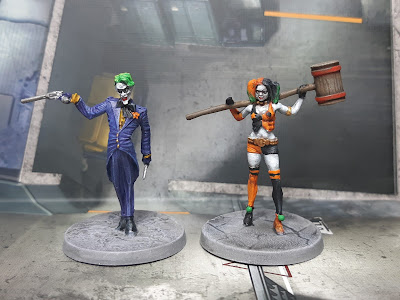 Boxes, boards, booklets and counters are all quality stuff. There is a separate cassette to store the rule booklets in. Playing boards are large foldup affairs that are printed on both sides, providing maximum variation with a minimum of material. The several booklets contain a bunch of scenarios, much more than there were initially included in Conan.

The rulebooks are IMO a great improvement over the Conan books. The initial Conan rulebook was dreadful, badly translated from French and very much incomplete. Monolith actually reissued a new ruebook for free for all backers.

The Batman rulebooks are much better. They are complete, much better translated and contain lots of examples of play. The internal artwork and layout are not to everyone's taste and to be honest the pages can be so busy with pics and colours it takes some effort to find the information at some points. But apart from that the rulebooks are comprehensive, complete and set up with logic behind them.

The game comes with its specialized dice and even the extra dice were included in the All-in. Point of critique for the genuine Batnerds: there was no Batman dice bag in the Kickstarter. I had to buy one from a separate source of course. I am sure this will be amended in Season 2……

The miniatures
… are excellent! Let the pictures speak for themselves. They come assembled and ready to play with and take paint very well after a few hours in some dishwasher liquid and a good scrub with a toothbrush. The tough plastic they are made from does not break easily. There were some warped parts (a problem caused right after casting by the still-warm plastic cooling off too quickly) but this can be easily remedied by dipping the miniature into hot (near-boiling) water for a few seconds, bending it in the right shape and cooling it off under a cold tap. Preferably before painting, by the way…. 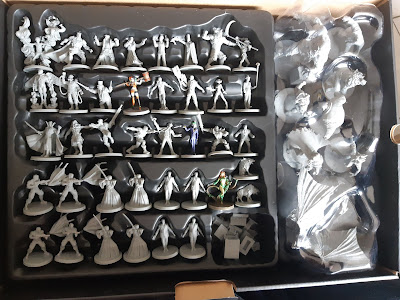 You will meet Joker and Harley, Pinguin and Riddler, Batman and Robin and all the major Heroes and Villains, as well as the more (or even extremely) obscure characters like Batcow and the Animatronic T-Rex, the biggest figure in the game. Although Clayface is not to be trifled with either. The Batmobile is superb and hails from the Fears comic if I am not mistaken.

Season 2 and The Second Chance
On June 4th Season 2 of the Batman Kickstarter will go live. This will include a second chance to buy Season 1 as well as -of course- the first chance to buy Season 2. The contents of Season 2 are still clouded in mystery as I write this, but more Heroes and Villains from the sheer inexhaustable stock of the Batman Universe can be expected. Me, I have set my hopes on a Tumbler Batmobile and/or a Batpod motorbike as well. 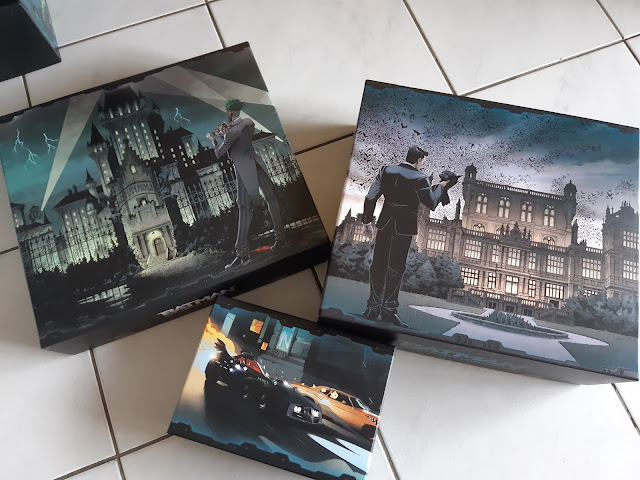