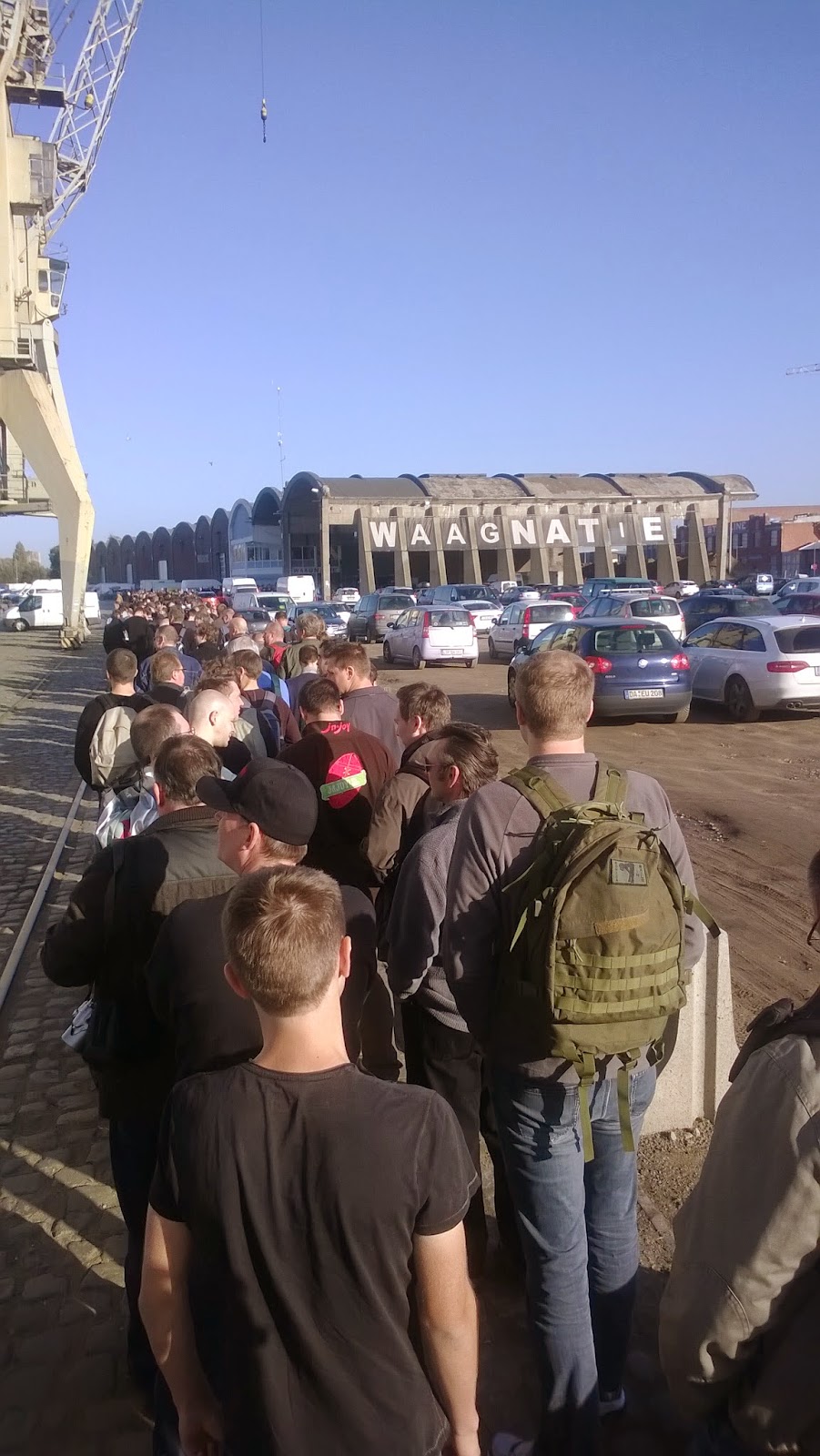 ...and lived to tell about it!

Once more we, my son and his girl and yours truly, visited the largest and most enjoyable of all continental wargame shows, hosted by the Tin Soldiers of Antwerp: Crisis!

Under a clear blue sky in  most un-November like weather we waited in line until we could plunk down our entry fee in exchange for the traditional goodie bag, the free figure and a day of games and chat (and some minor shopping, of course). 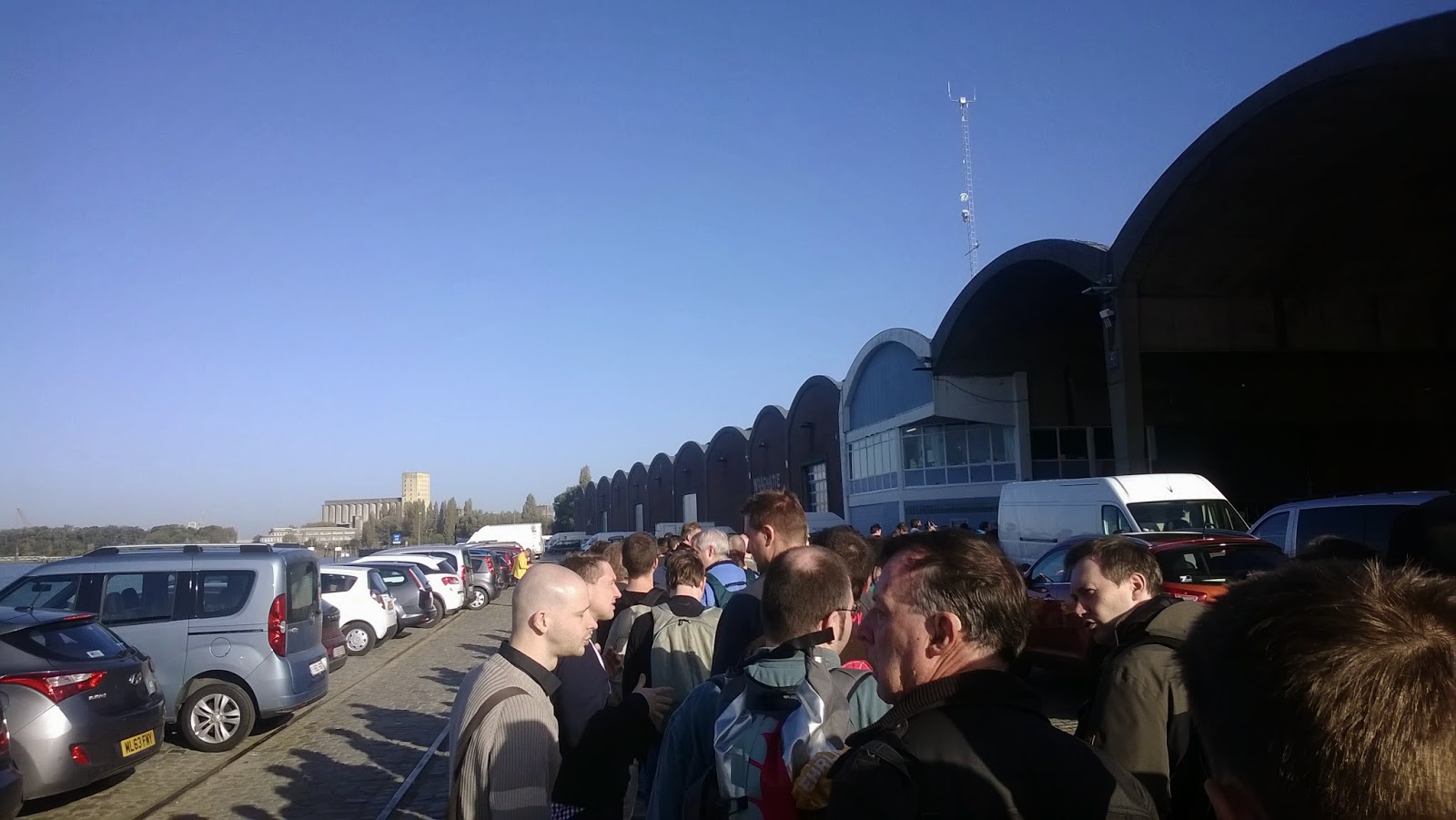 Usually the goodie bag is emptied of the free figure (a rifle-wielding king Albert I this time) and discarded, since it is usually filled with well-meant but useless commercial advice. This year however the bag contained a veritable treasure of 5 plastic figures, a field-of-fire template, six laser-cut bases and a bag of crisps! And the Crisis Gazette, which I only viewed once back home to discover that it had held a most comprehensive map of the event. If only I'd known.... 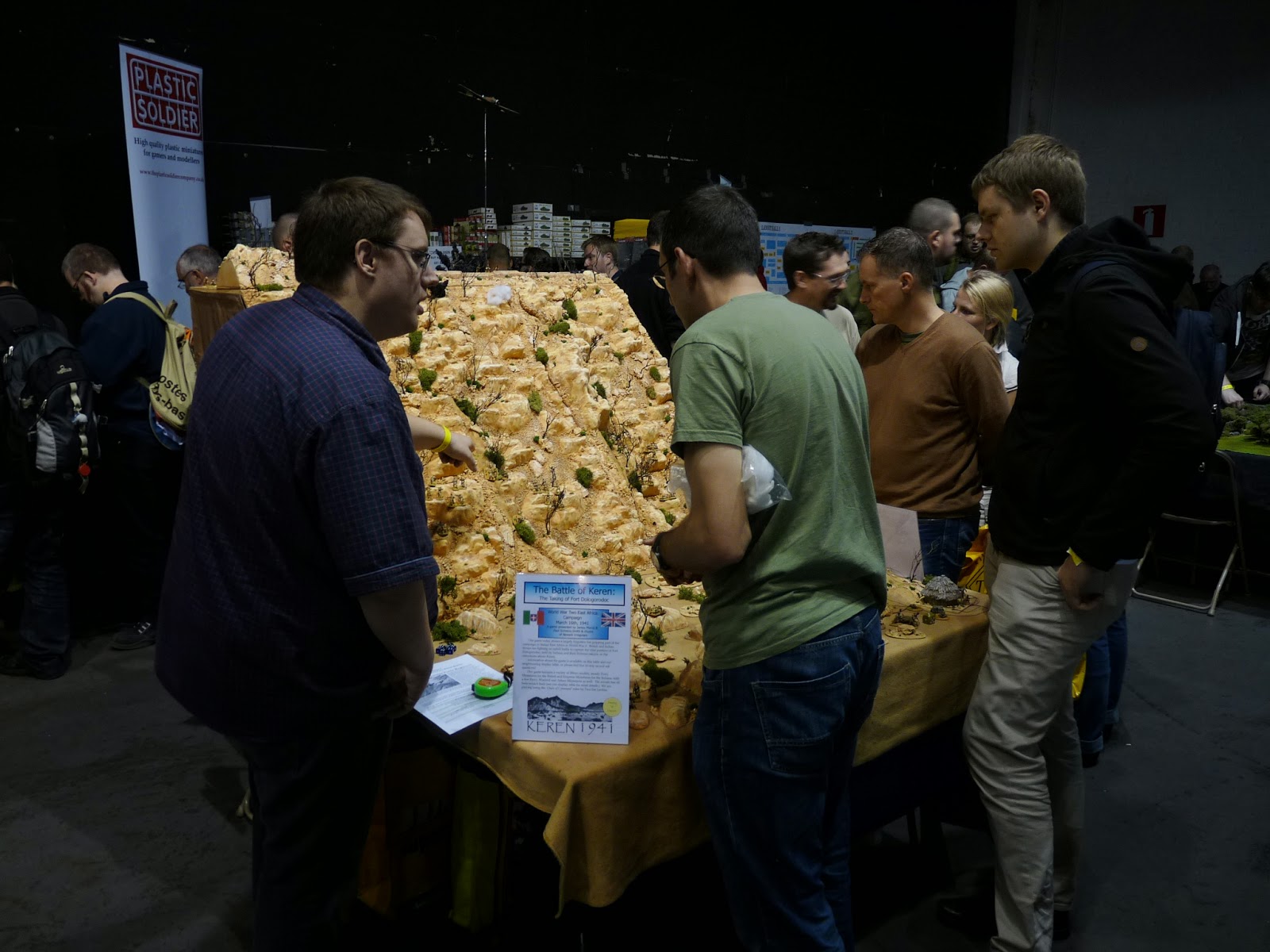 I had subscribed to the Battle of Keren Game by the Newark Irregulars. Having seen pictures from Salute of this game, I was very much looking forward to it. The table surpassed my greatest expectations! It was an absolutely smashing table, beautifully painted and about 1.80 meters high and filled with lovely figures.

The game featured a climactic phase in the Battle of Keren, the fall of Fort Dologorodoc, taken by storm by British and Indian troops after a prolonged bombardment. We used the Chain of Command rules and the British launched a susprise attack up the hill while the Italian and Colonial troops were supposed to hold as long as possible. 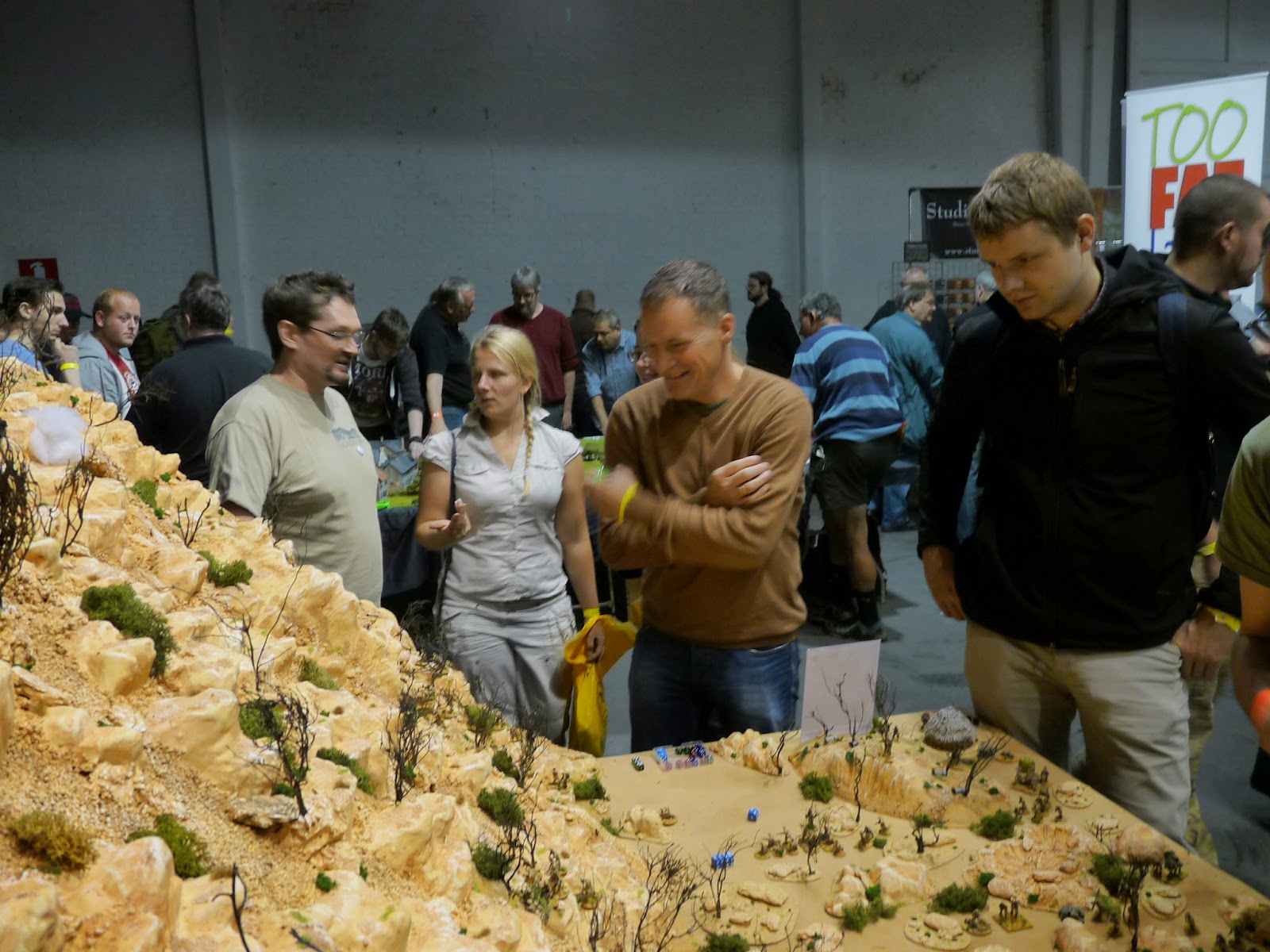 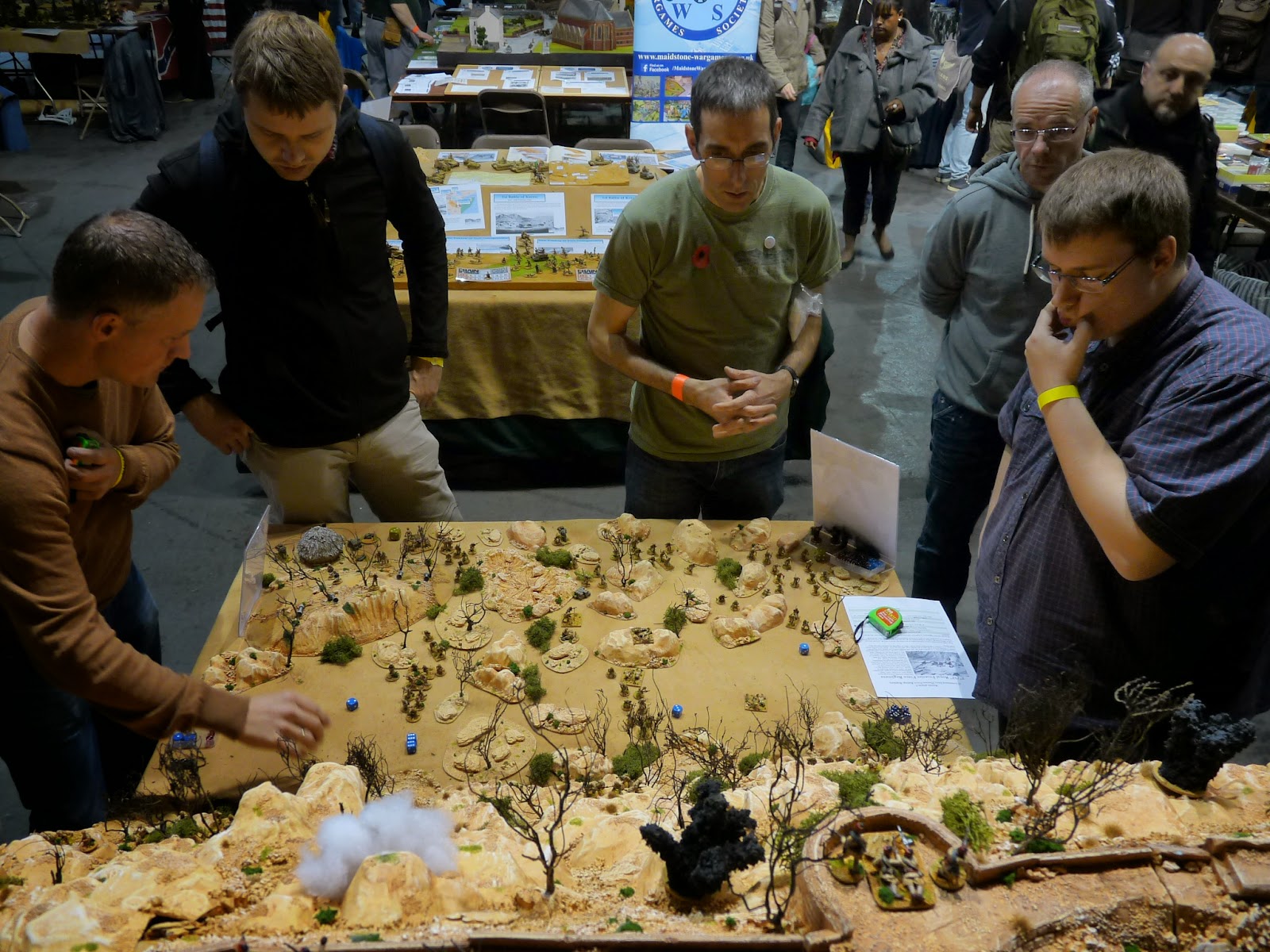 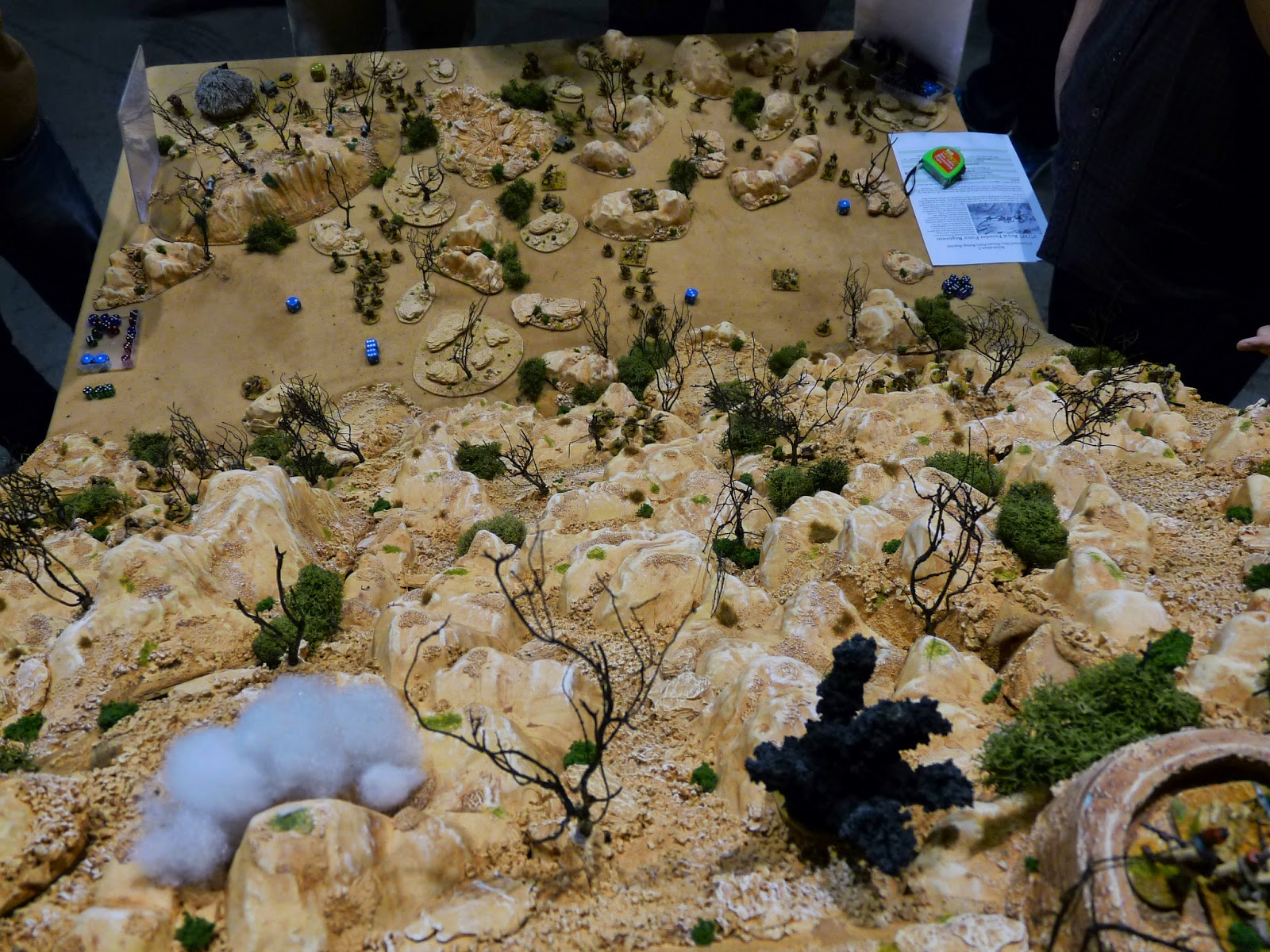 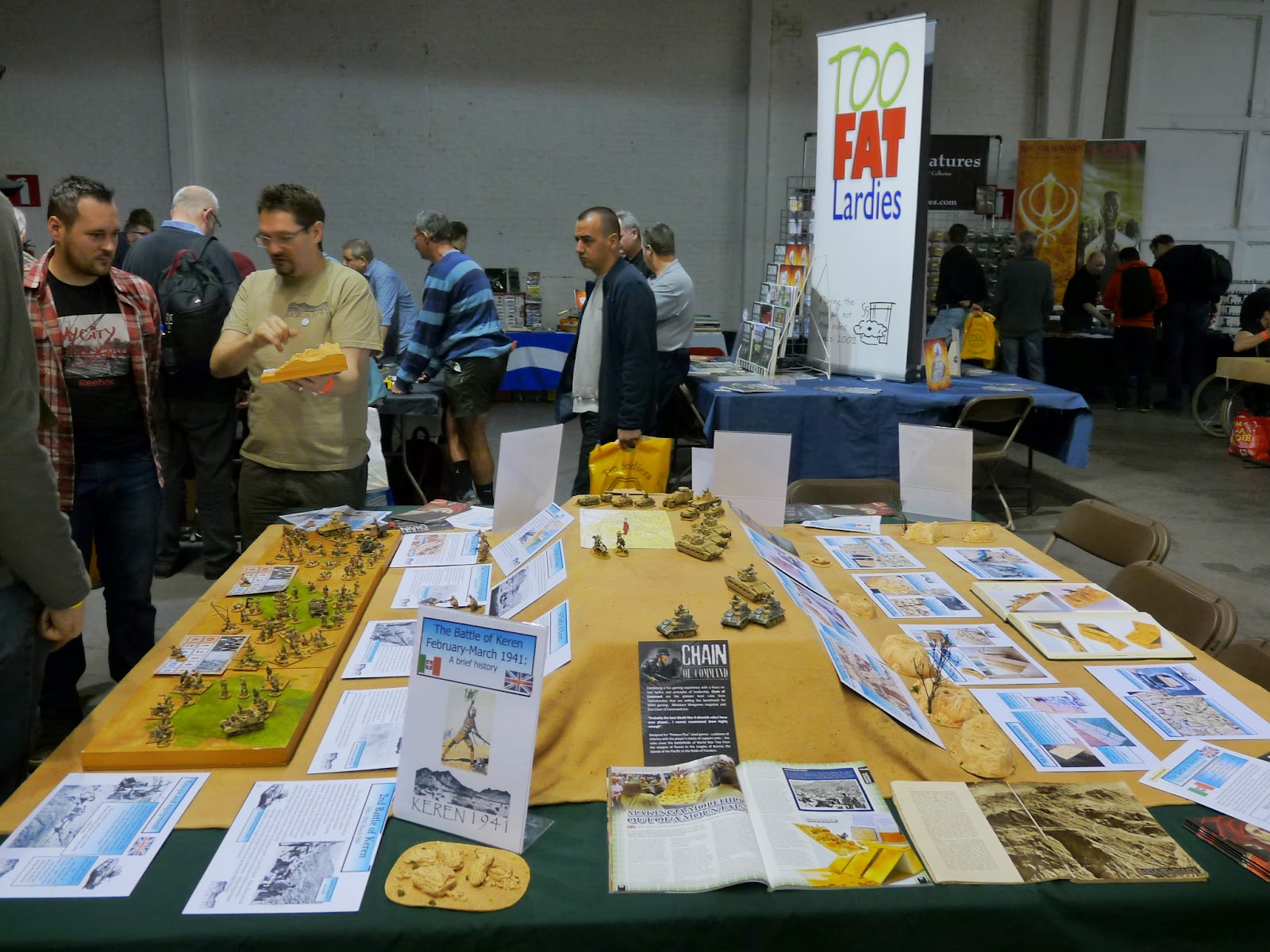 Above you see Scrivs tirelessly explaining how this game came to be.

Below you see the view uphill. 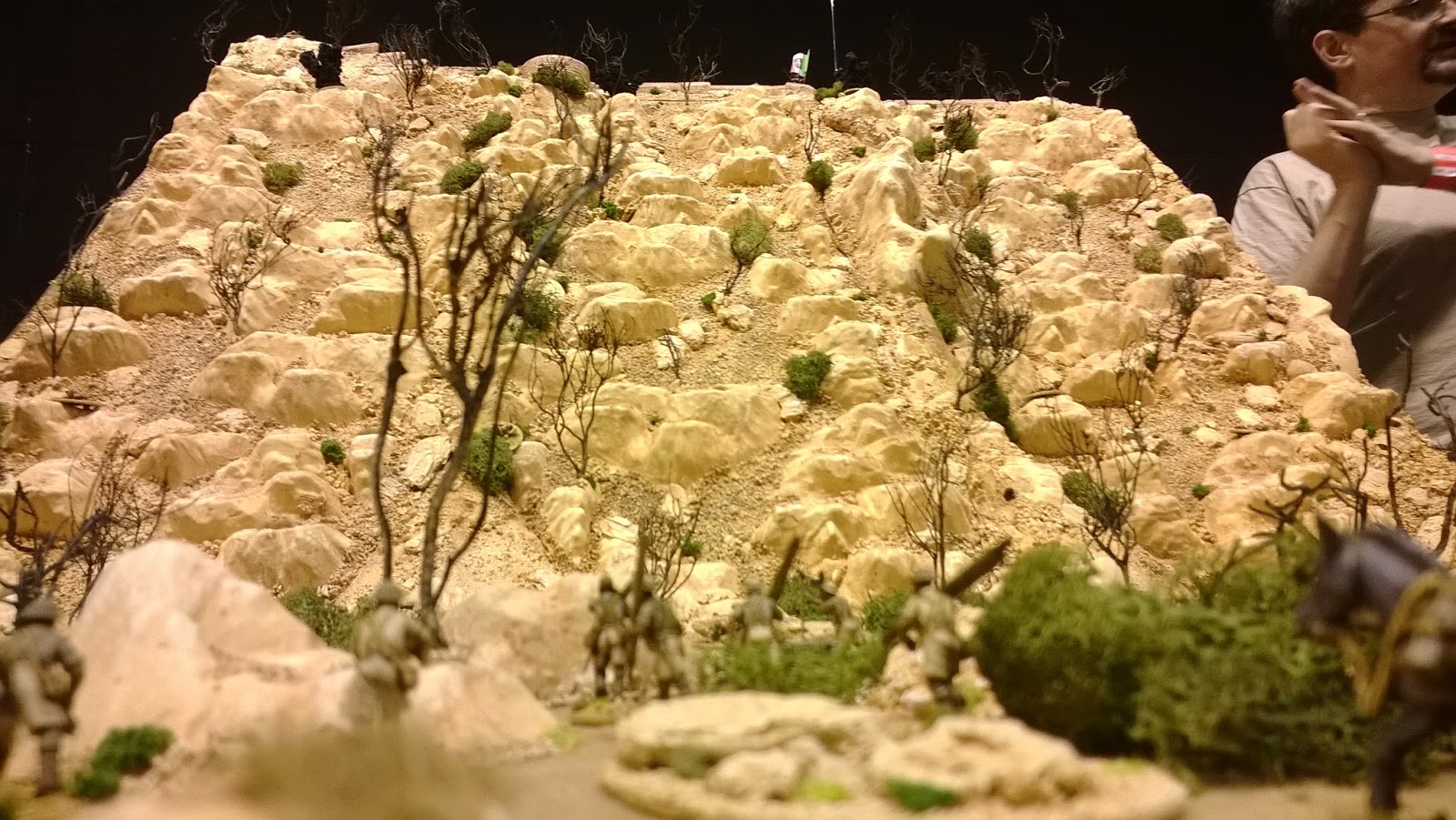 A tremendous amount of research and ingenuity went into building the Keren game. Everything you see here folds up so neatly it fits in the back of a Mini! 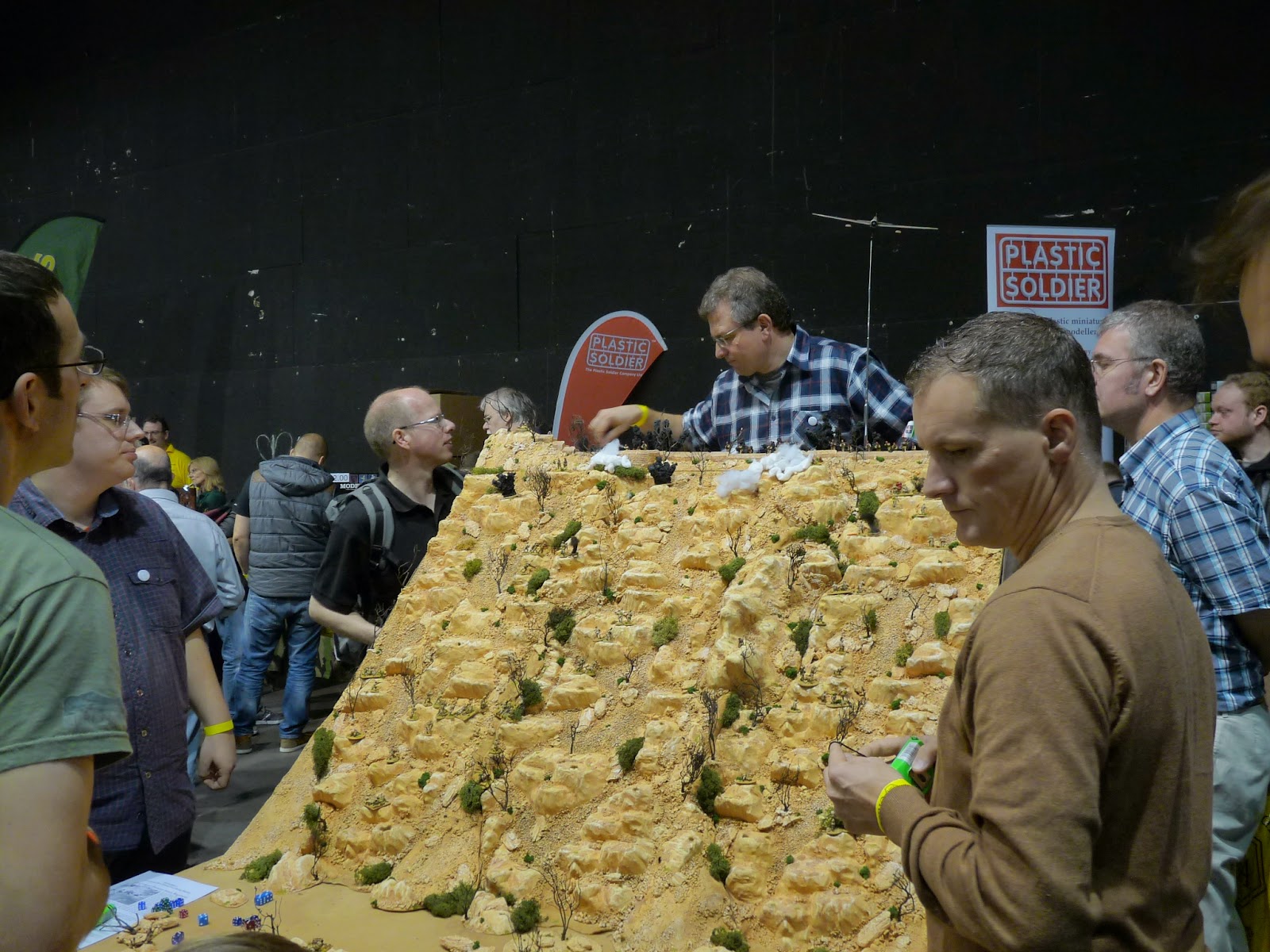 Here you see me on top of the mountain (the Italian player actually has to stand on a stool to be able to see his troops) directing my ever-dwindling Italian troops. 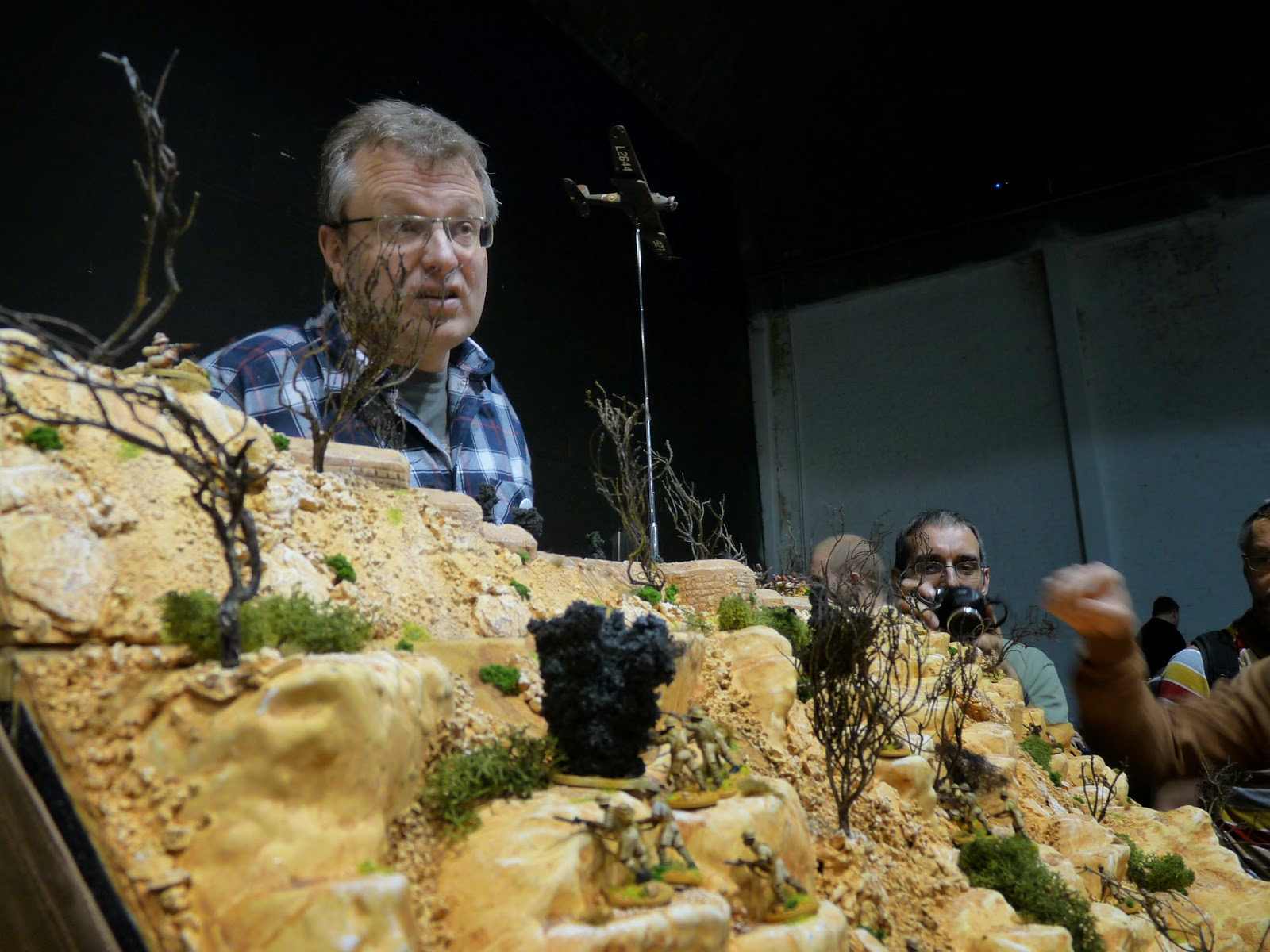 HOW many casualties you say you just scored? 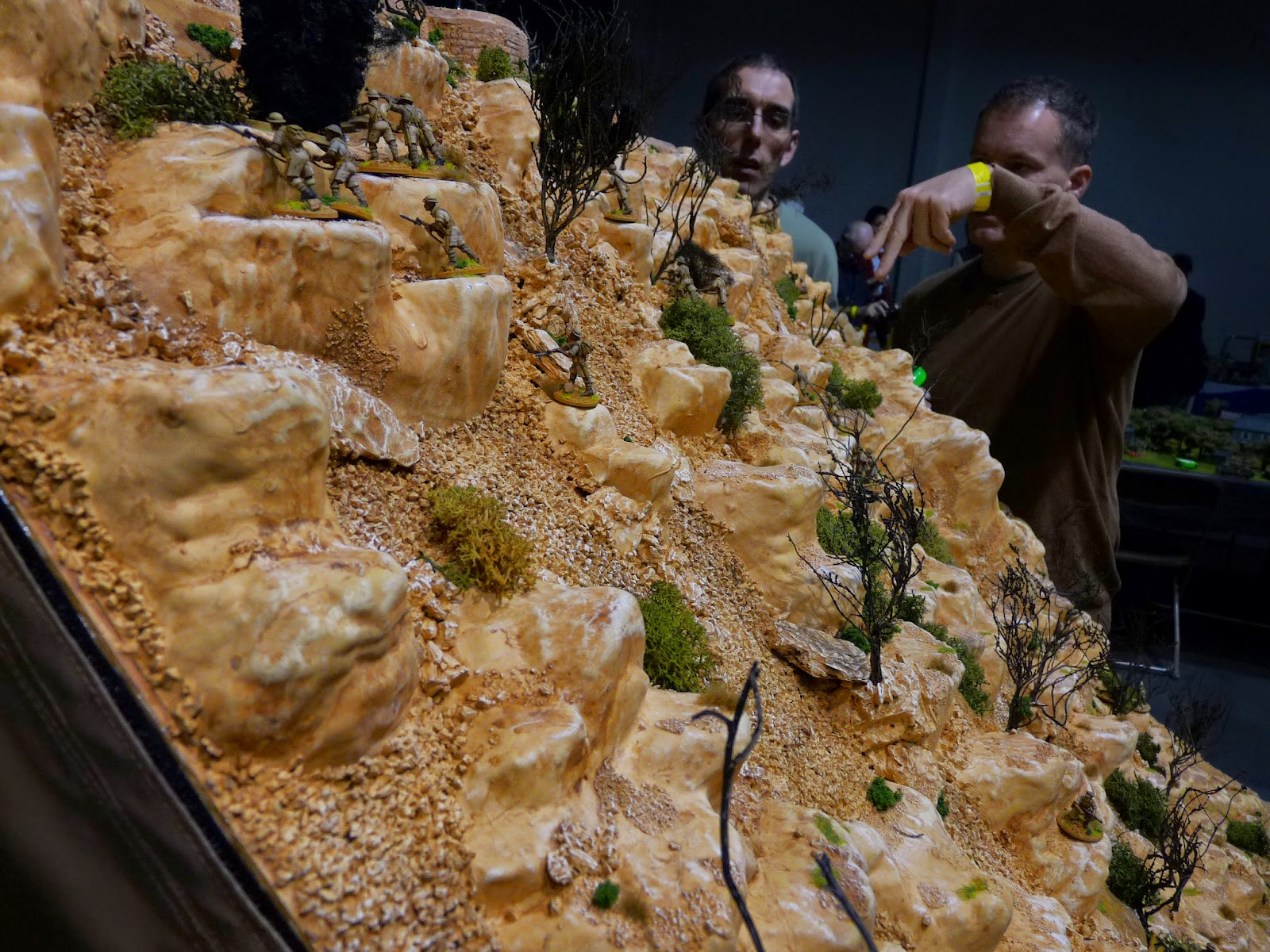 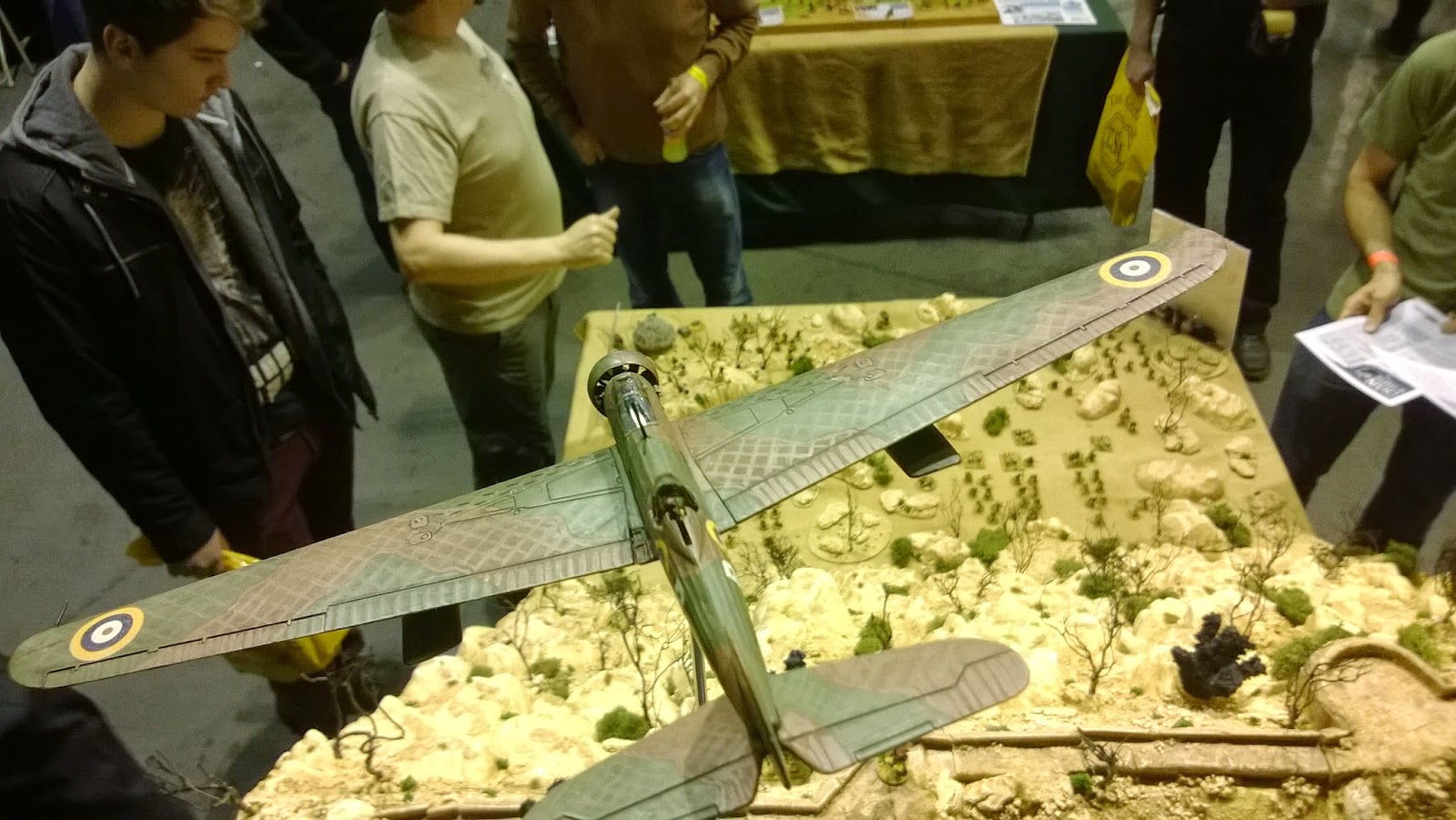 And finally the British troops reached the summit, ending the game with my Italians still unbroken and fighting (if largely killed)! My sincere thanks to James and Scrivs for the privilege to play this magnificent game, that not only looks amazing, but delivers a thrilling game as well! 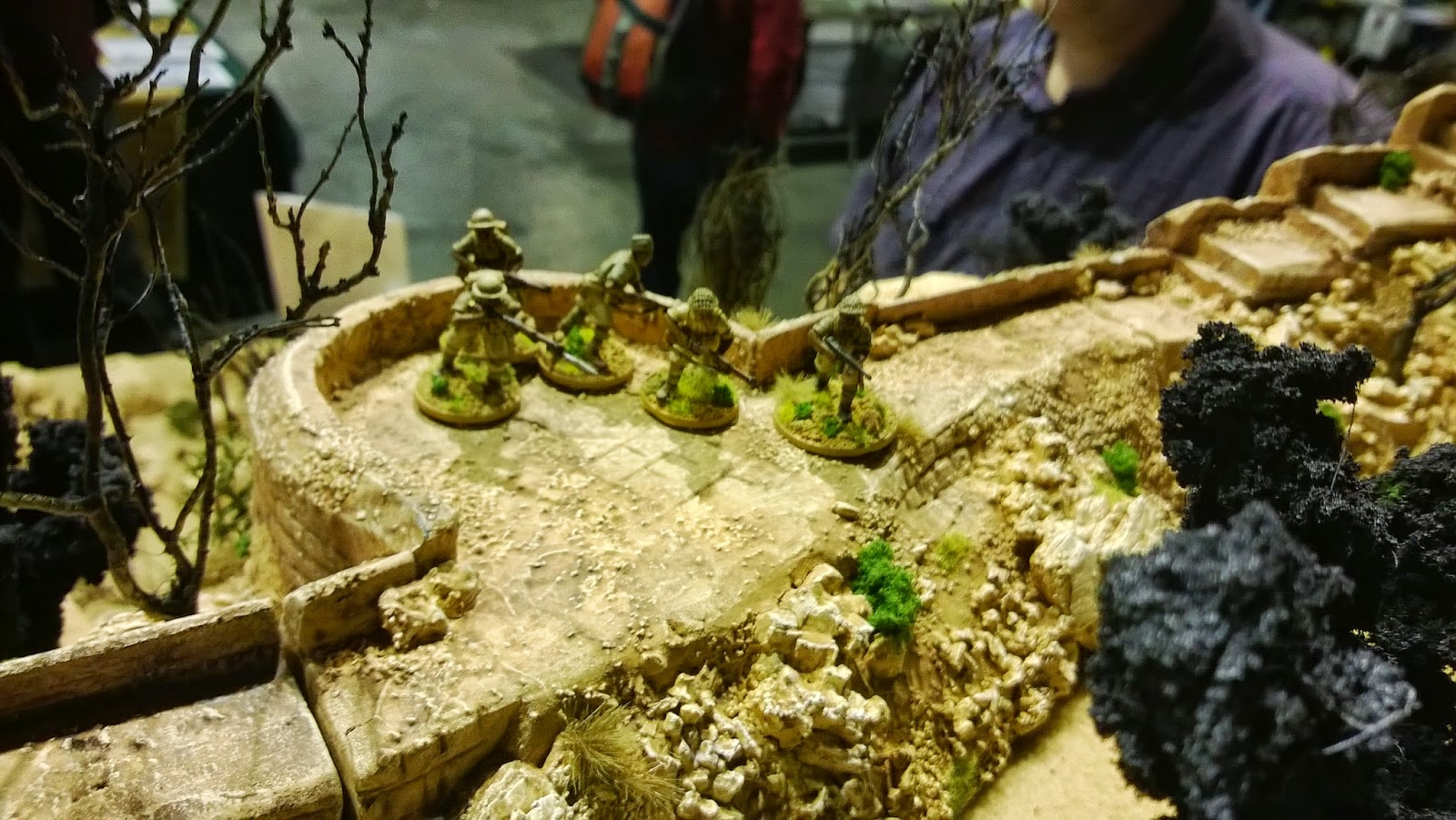 After the Keren game I immersed myself in the chatting. gaming and shopping crowd. I met a fantastic array of tables, paintwork. 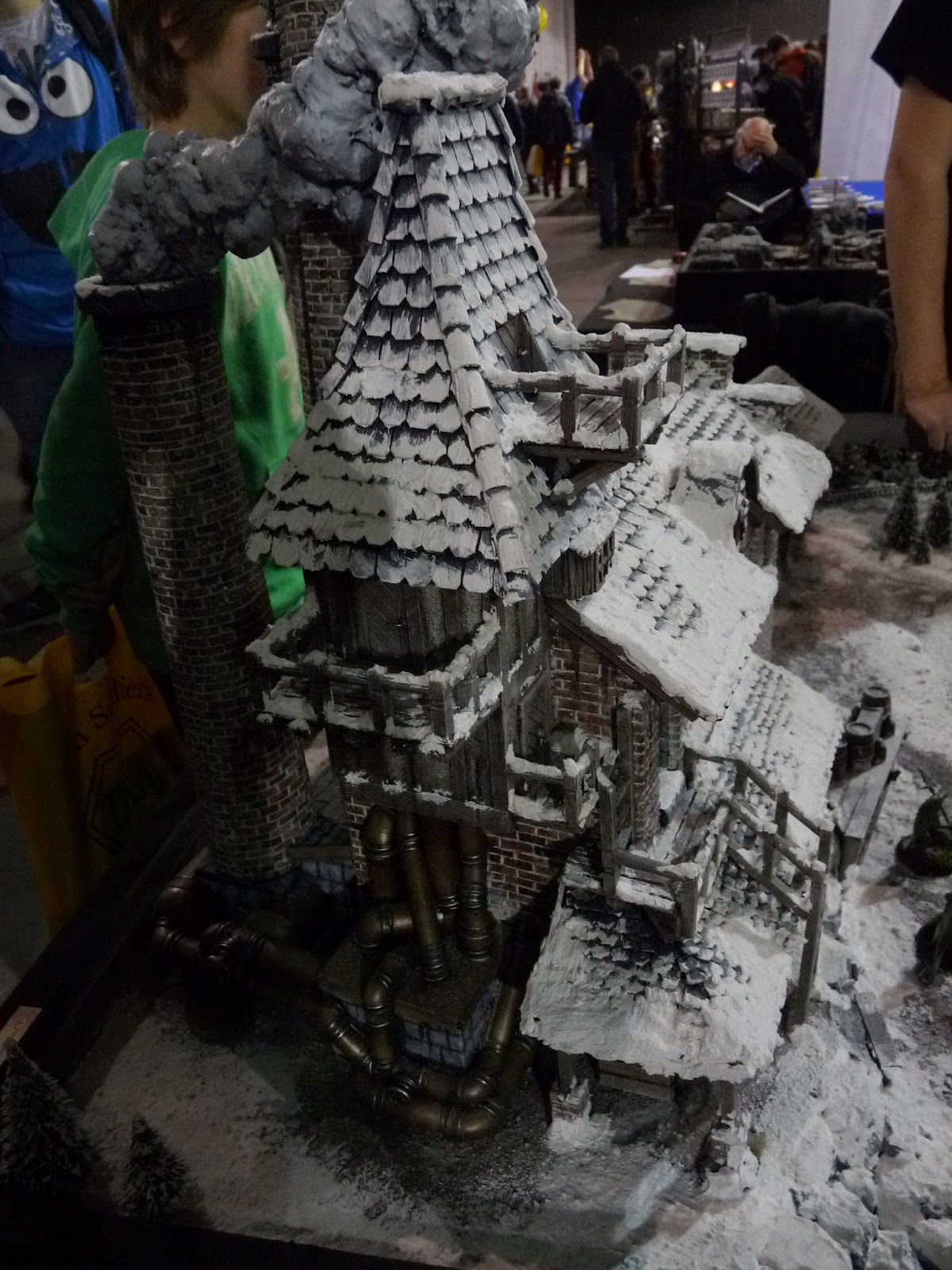 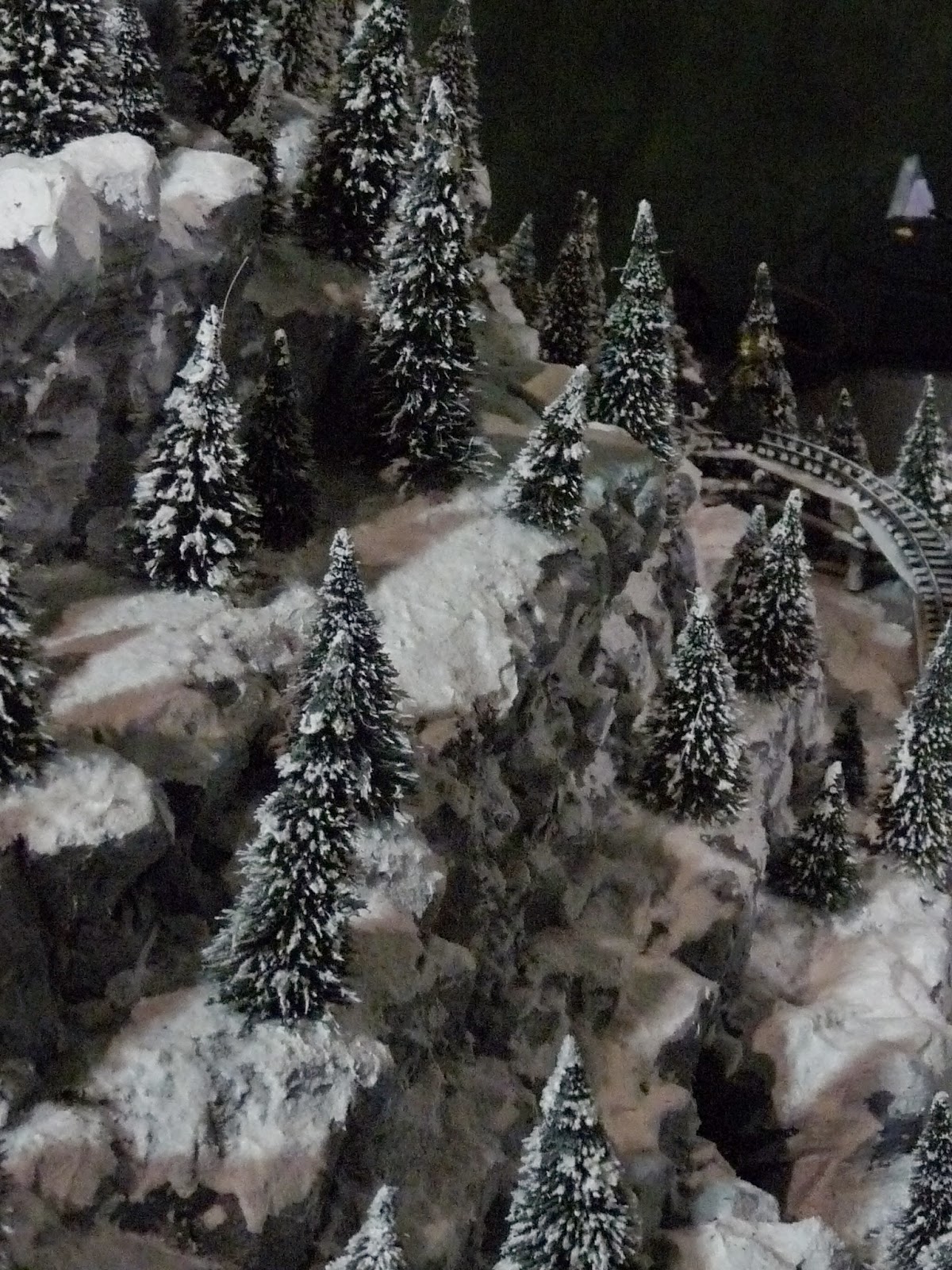 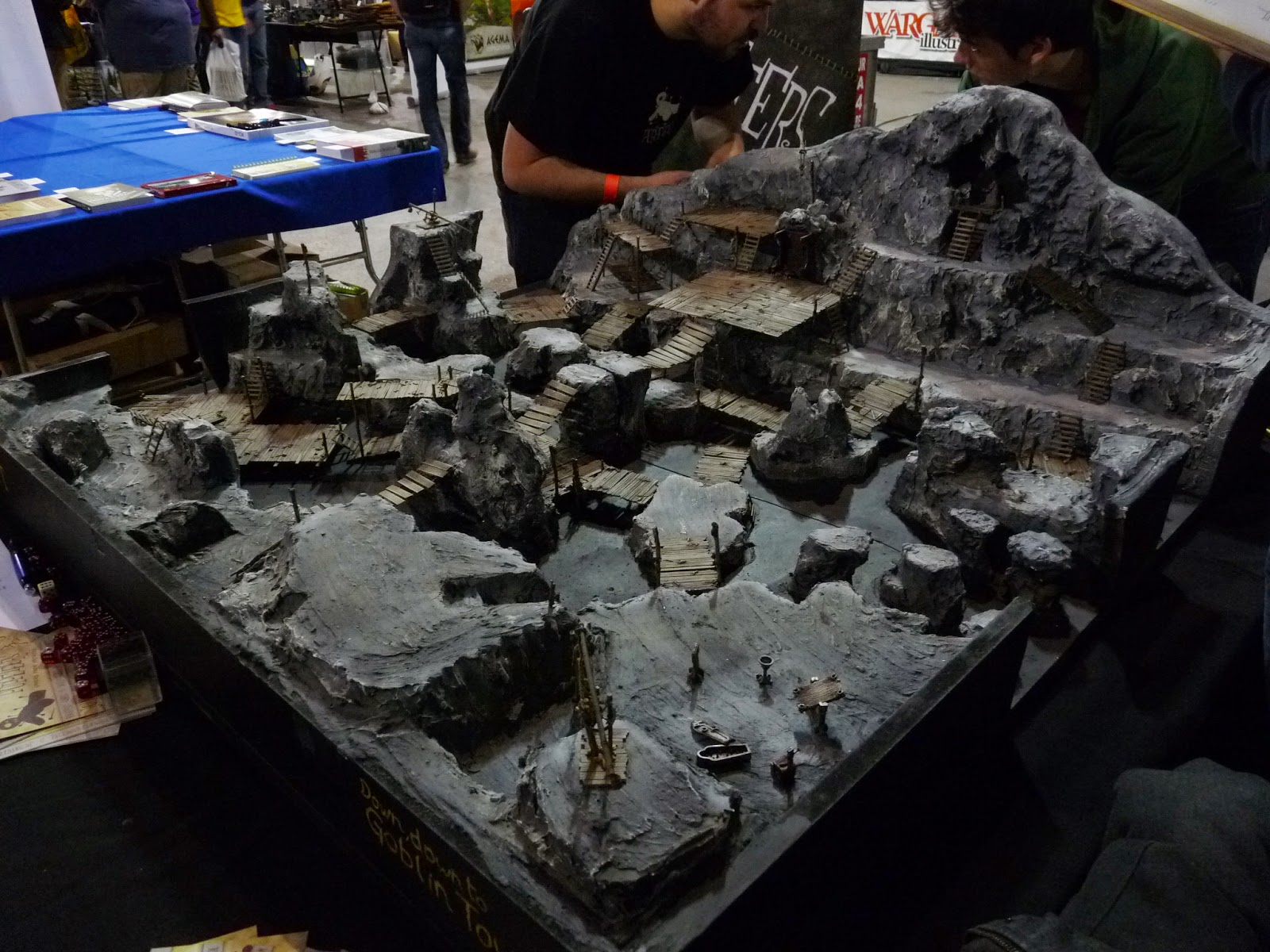 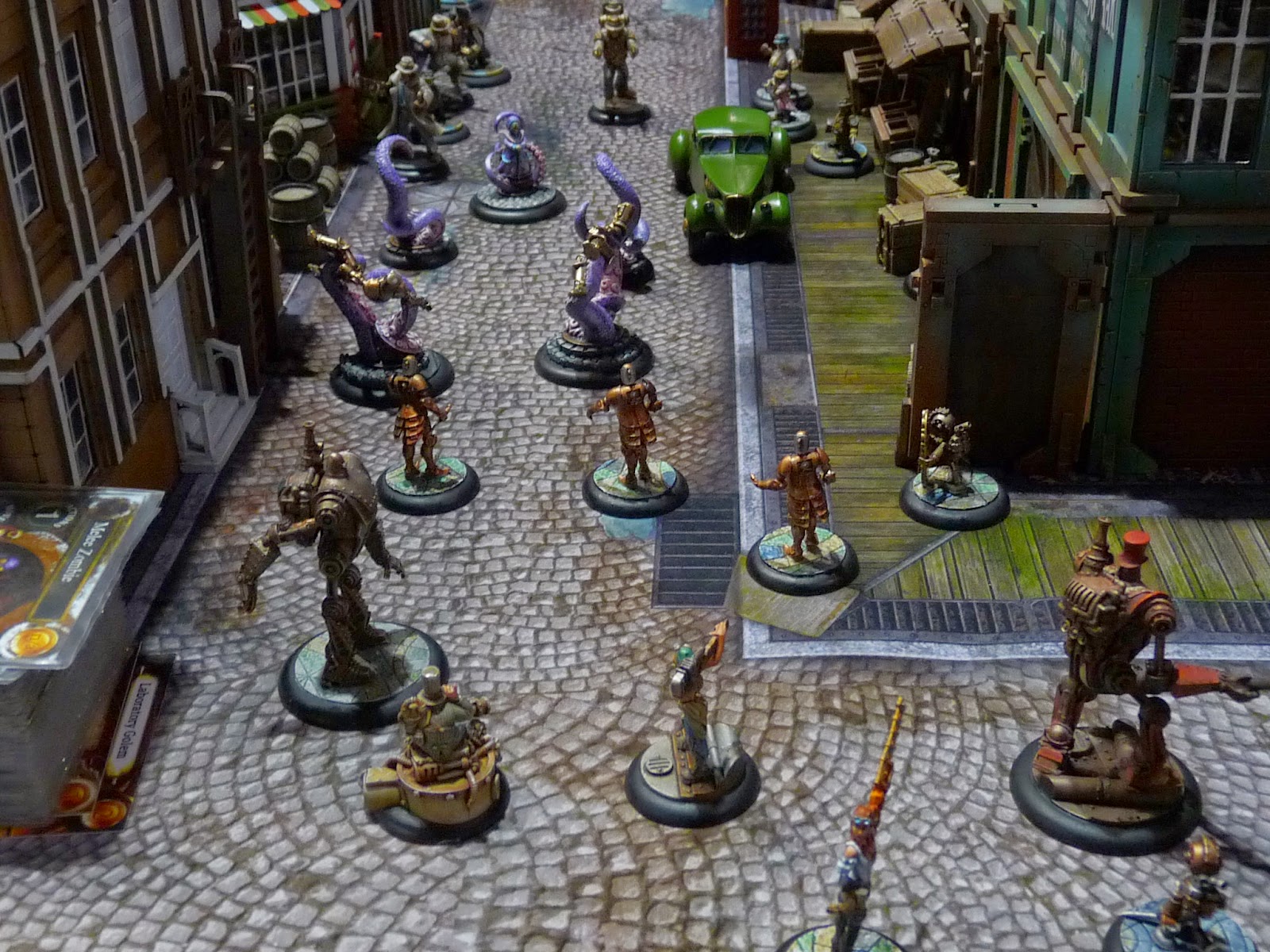 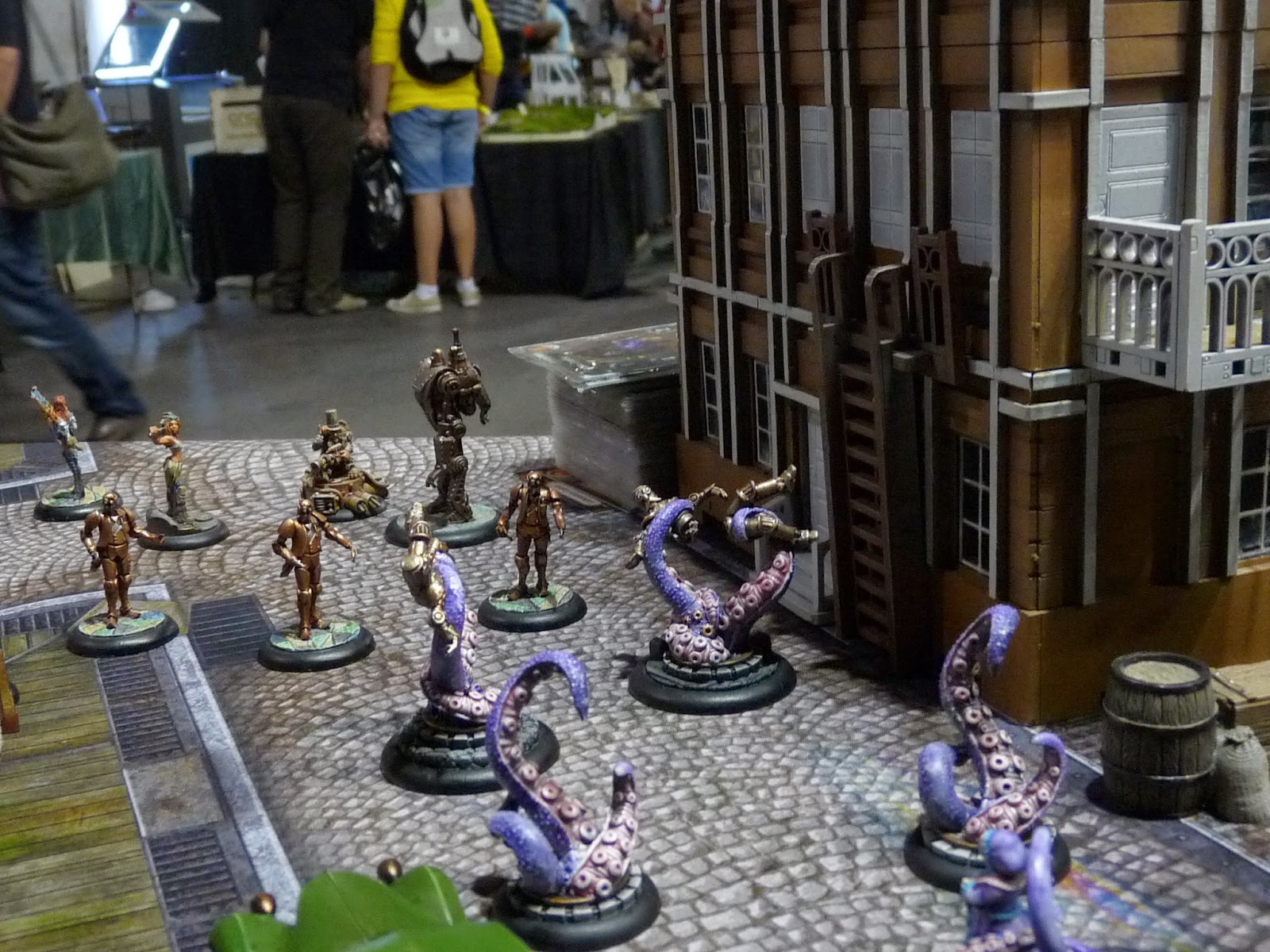 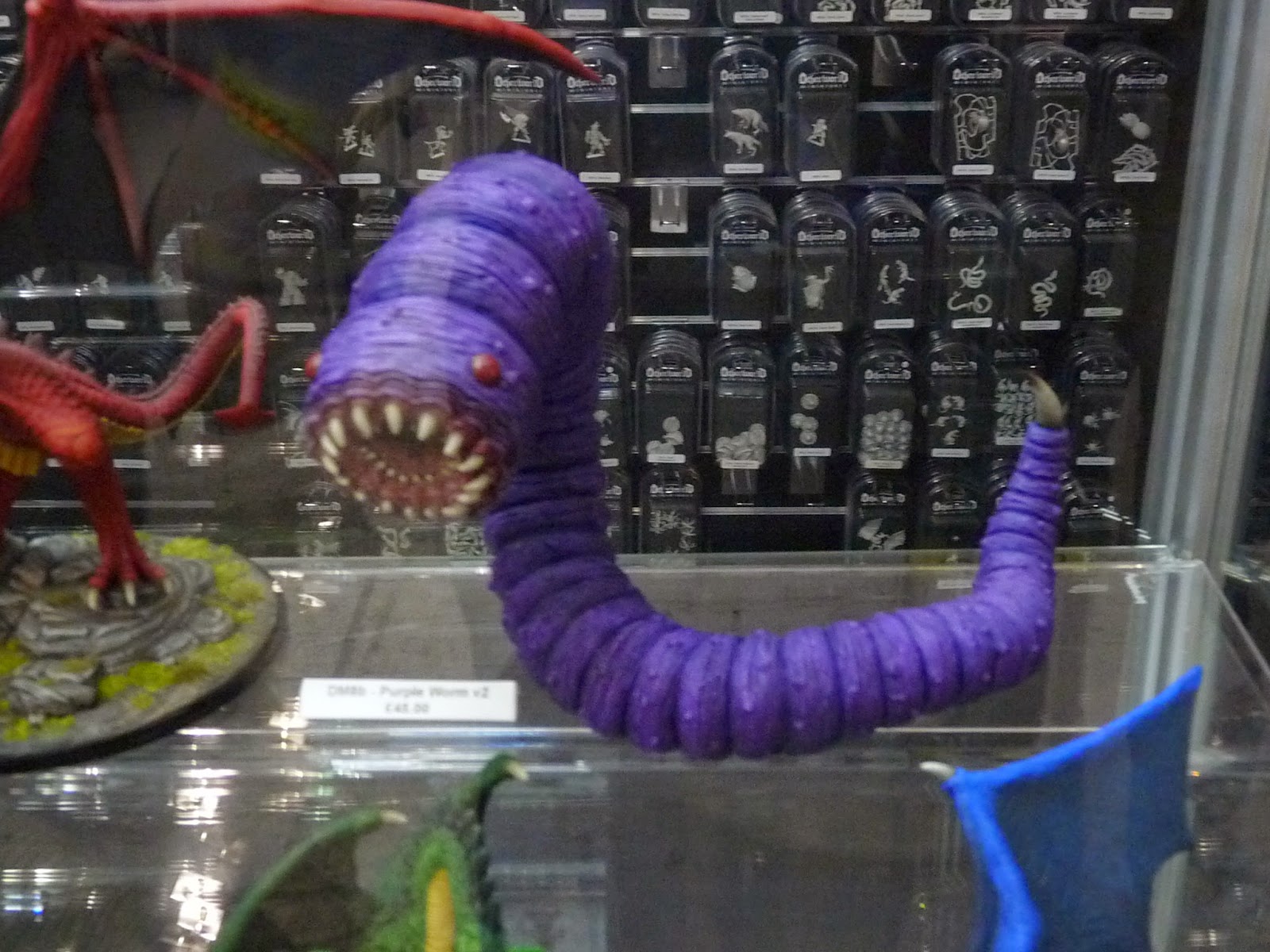 Most of these pictures were taken by Annemarie and everyone who knows her, knows she loves her purple.... 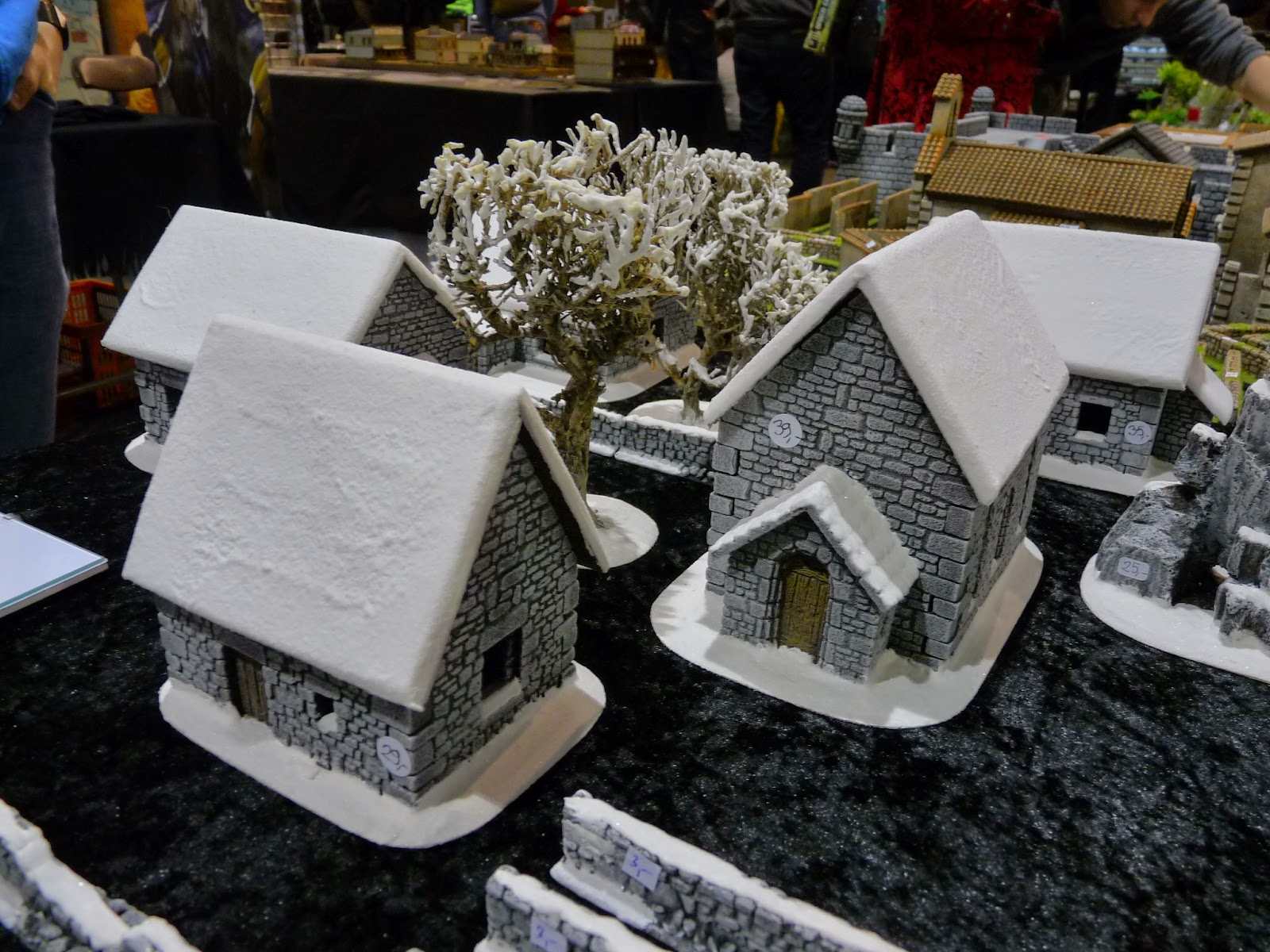 Next year I will built ten houses, sit in the Bring and Buy for an hour and sell them for insane prices. Then I will have more to spend than any other year before.... 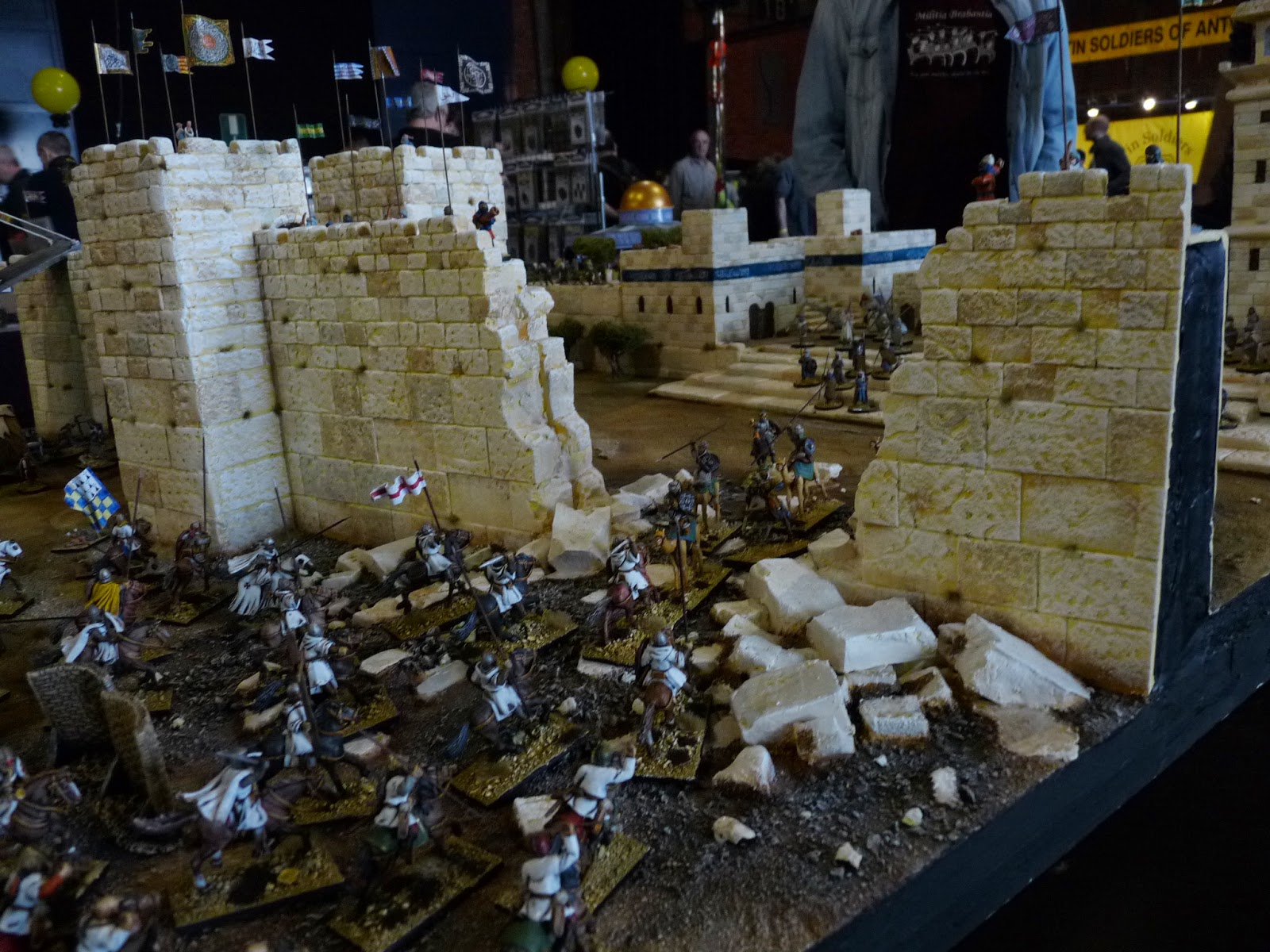 An impressive breach in Jerusalem's walls.. 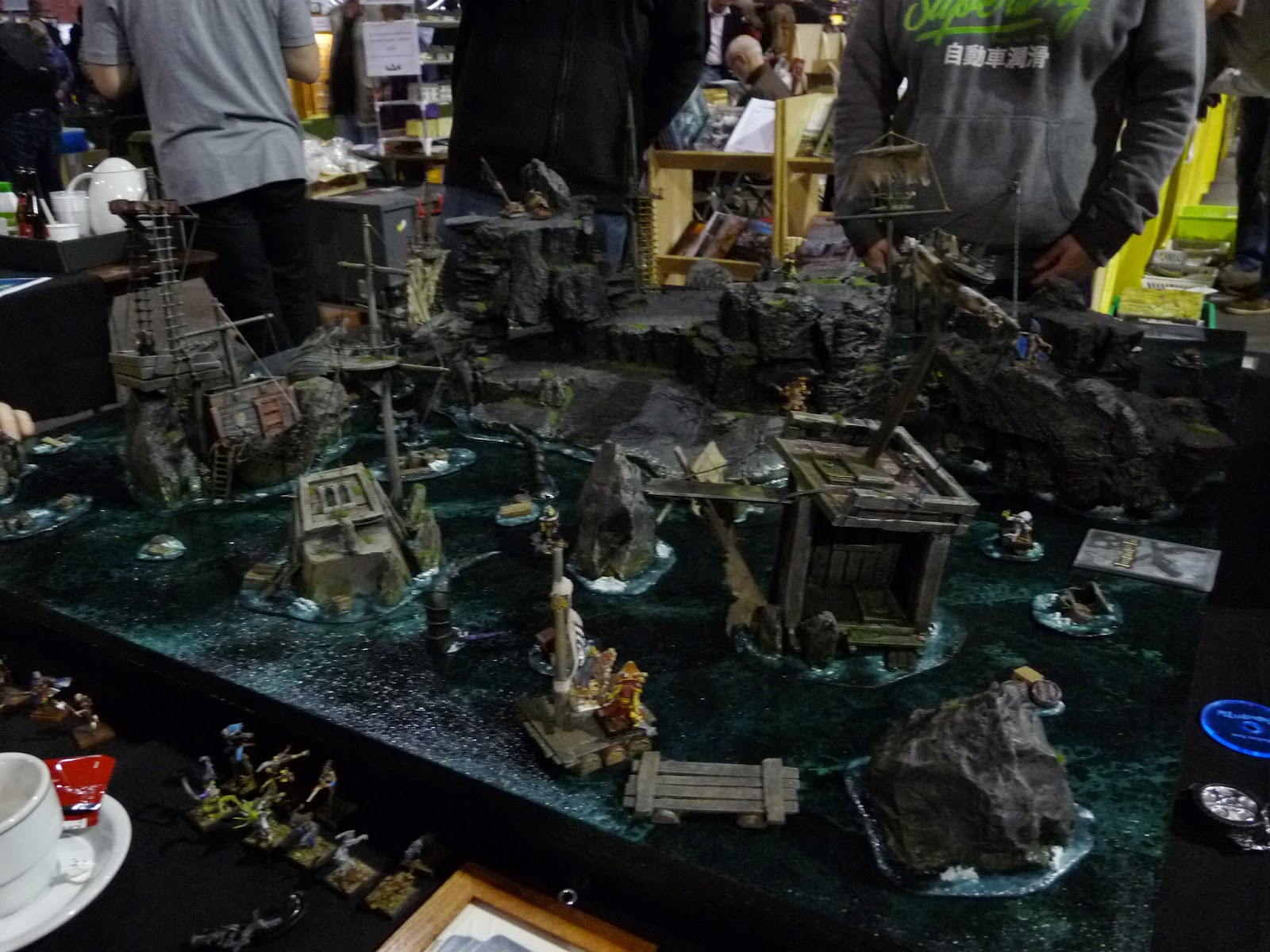 Freebooter once again made a great entry with this pirate table full of shipwrecks. It was unplayed at the time, a view I saw quite a lot actually. A lot of games either weren't particiation games or lacked players and/or hosts. Too bad, since there was a lot to be enjoyed playing the games. 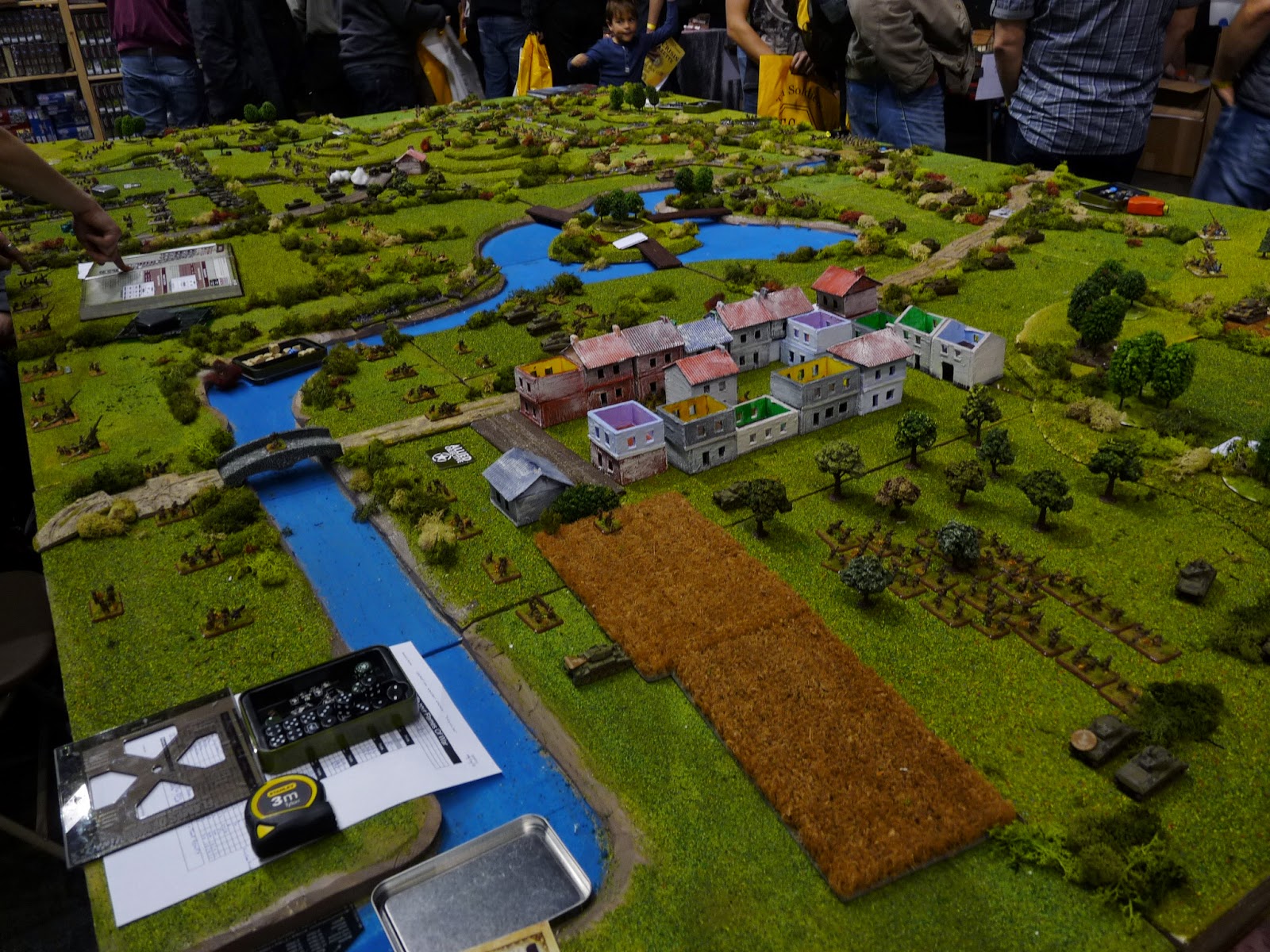 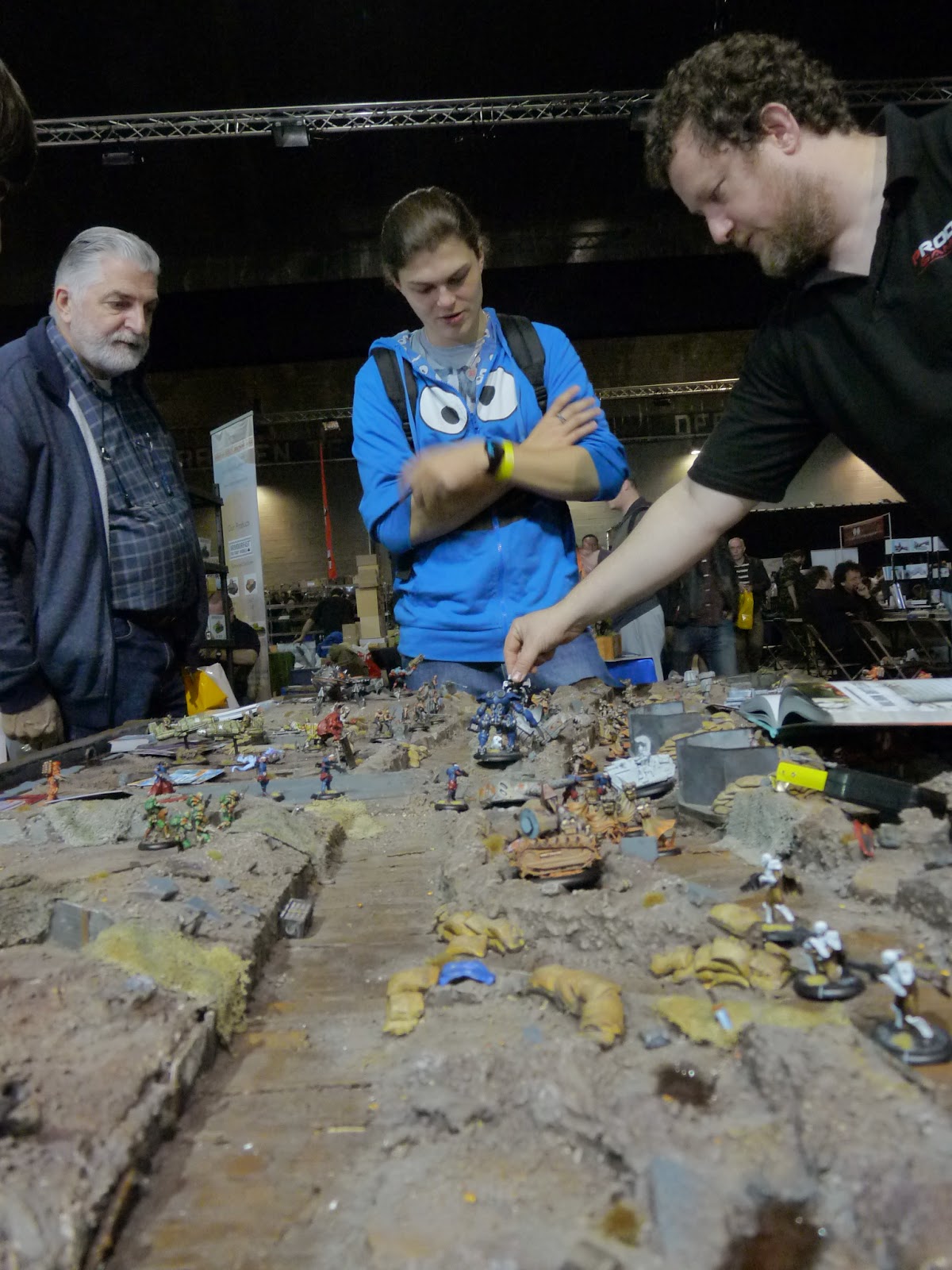 Above to the right you can see what wide expanses you can build when you play small scales like 10 or 6mm.


Above my son makes eyes at the impressive Deadzone table. 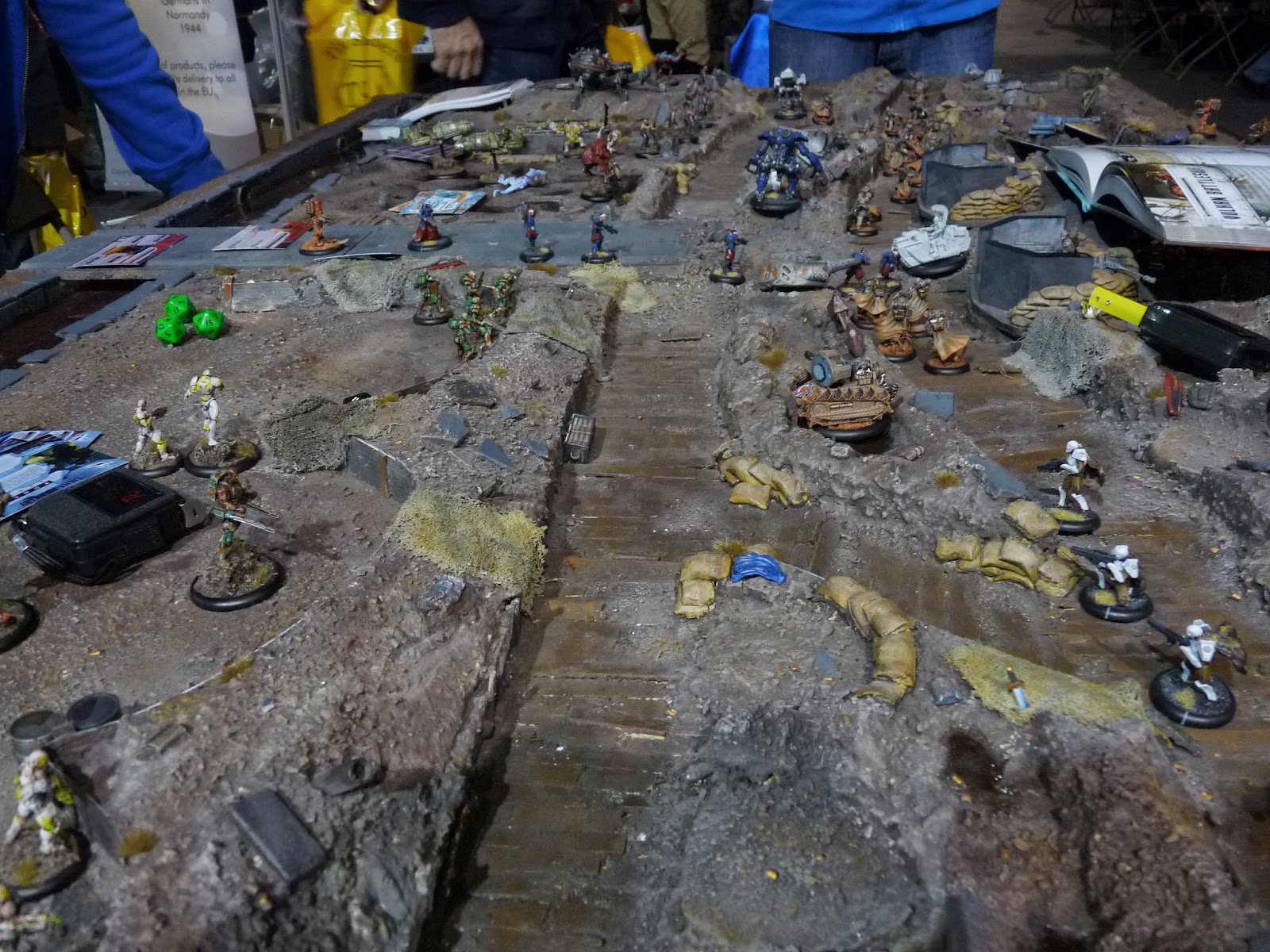 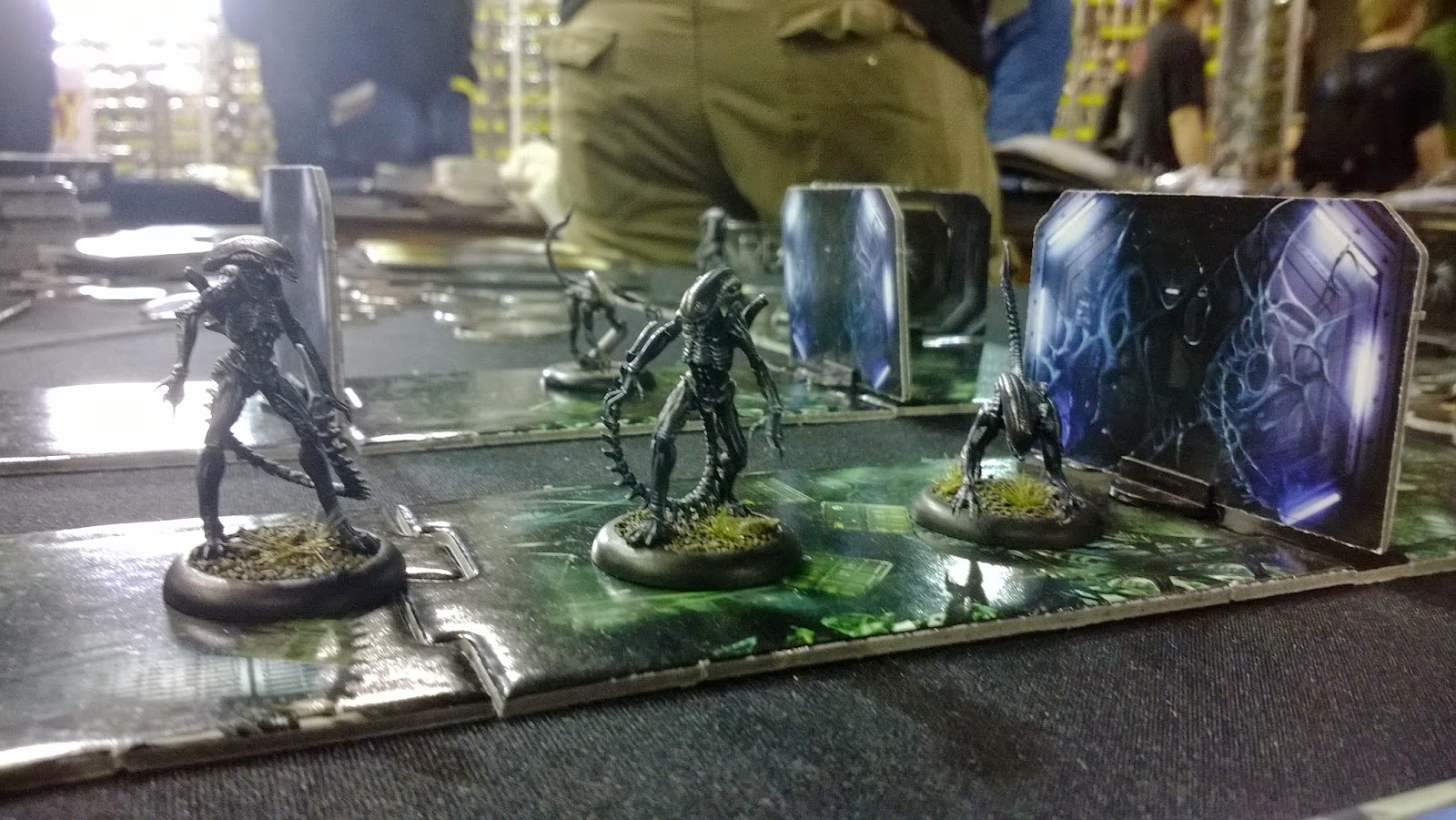 Prodos also presented the prototype  of their Alien vs Predator game.

I am keeping my fingers crossed that they will release the figures separately.... 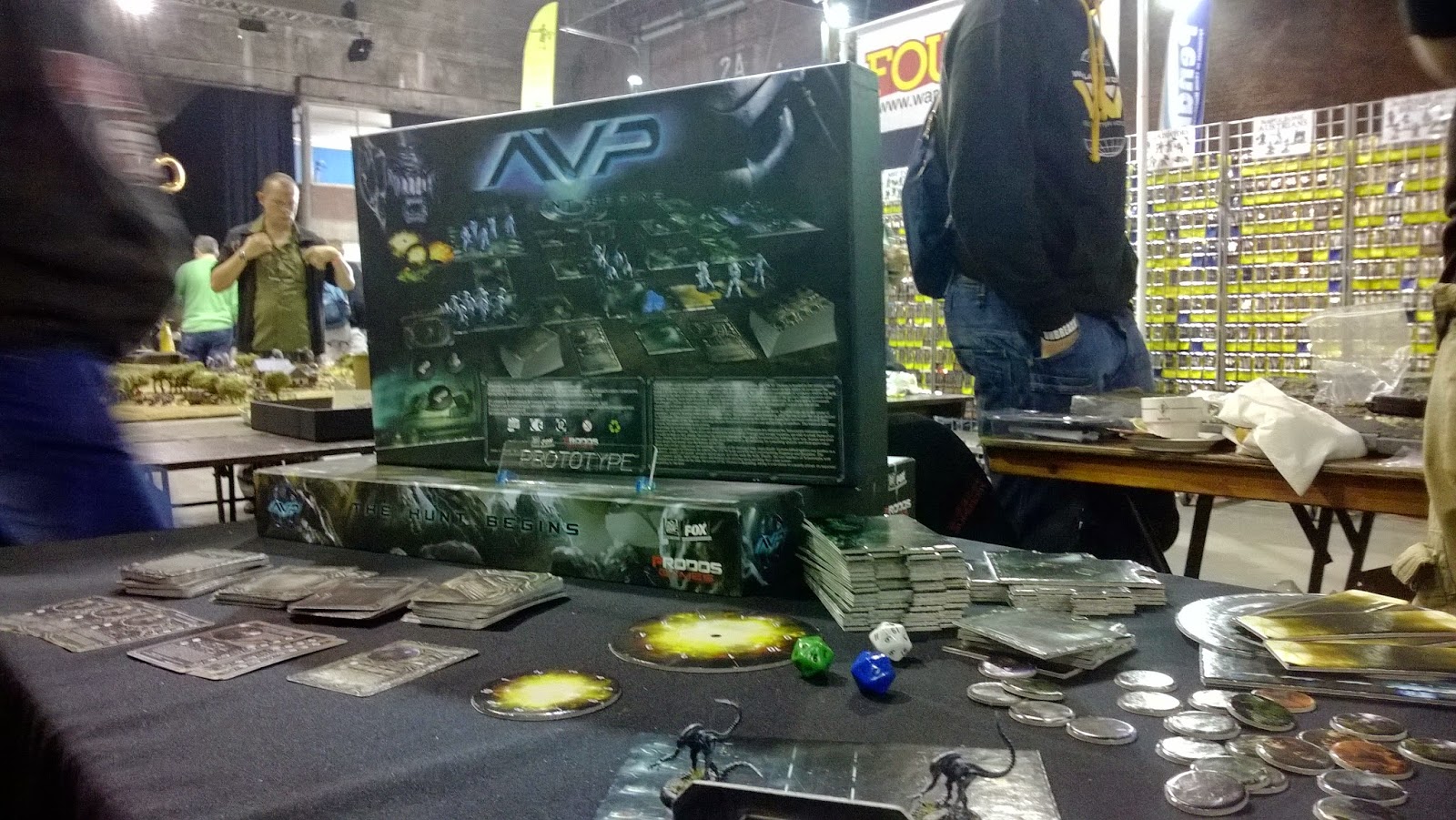 PS:
My son informed with the Prodos people whether they were planning to release the figures separately and it turns out they are!!! 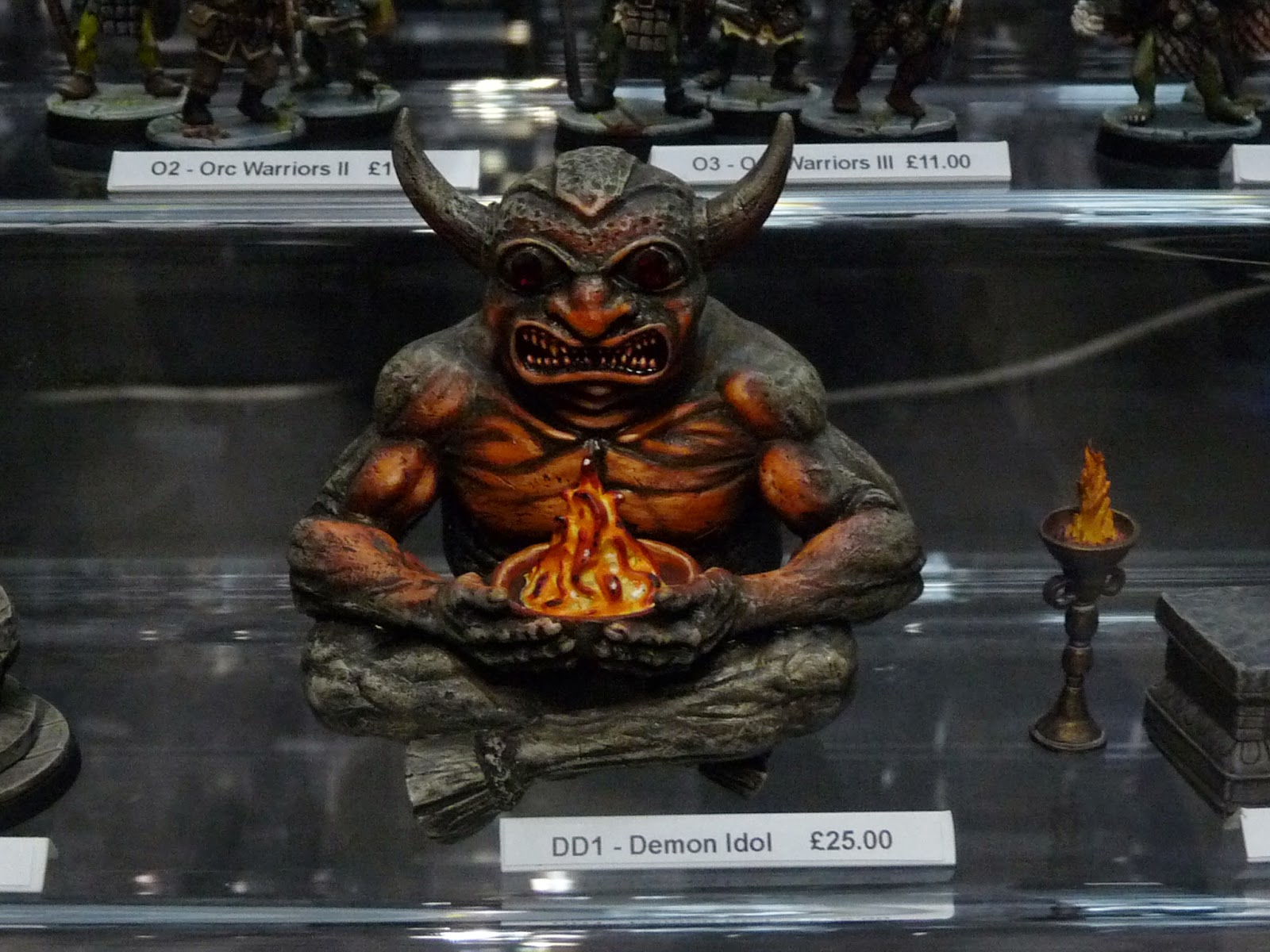 Some paintwork defied belief, so well was it done.

The illuminated demon idol and the Amazonian dragon below were just a few examples. 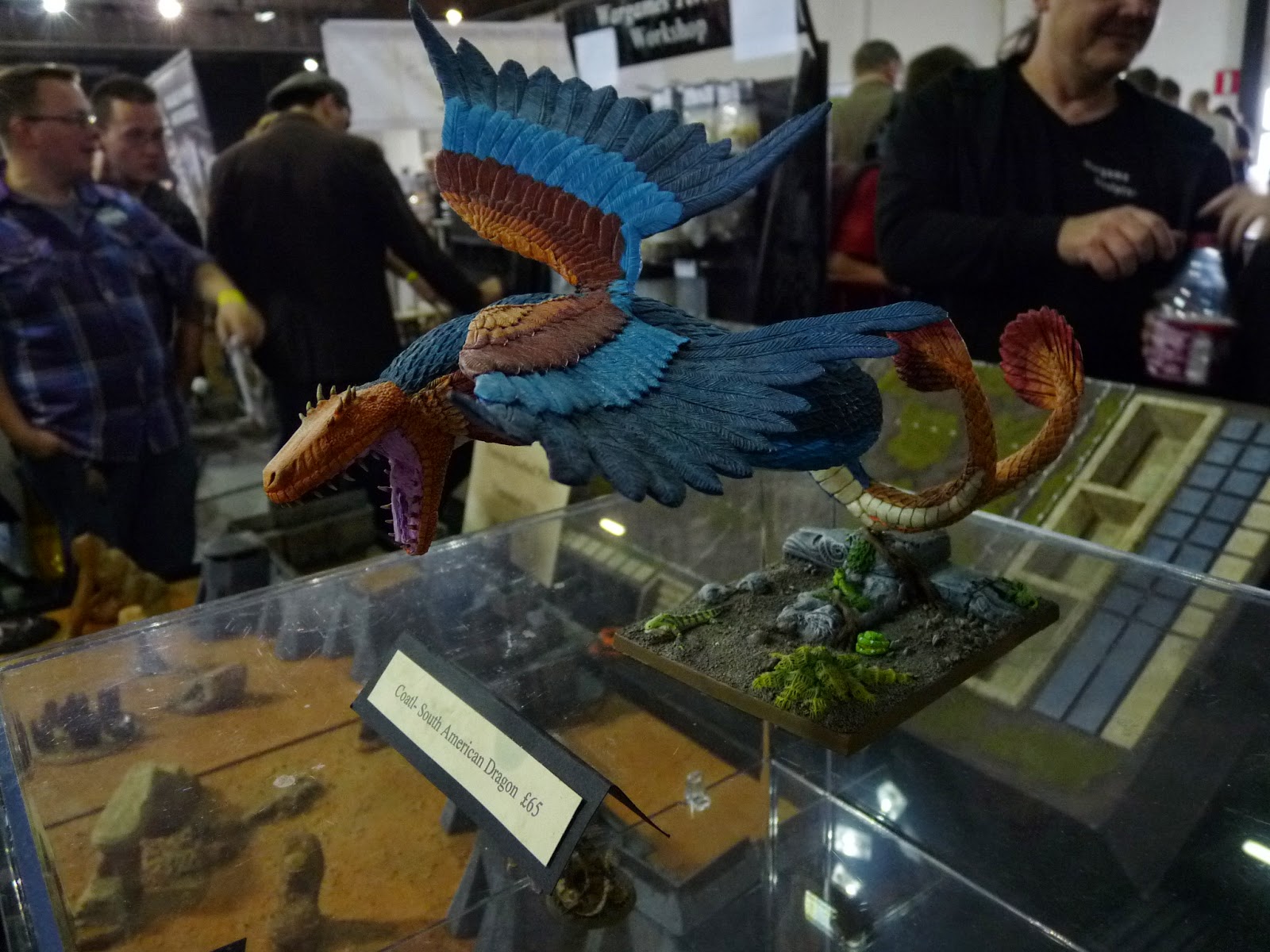 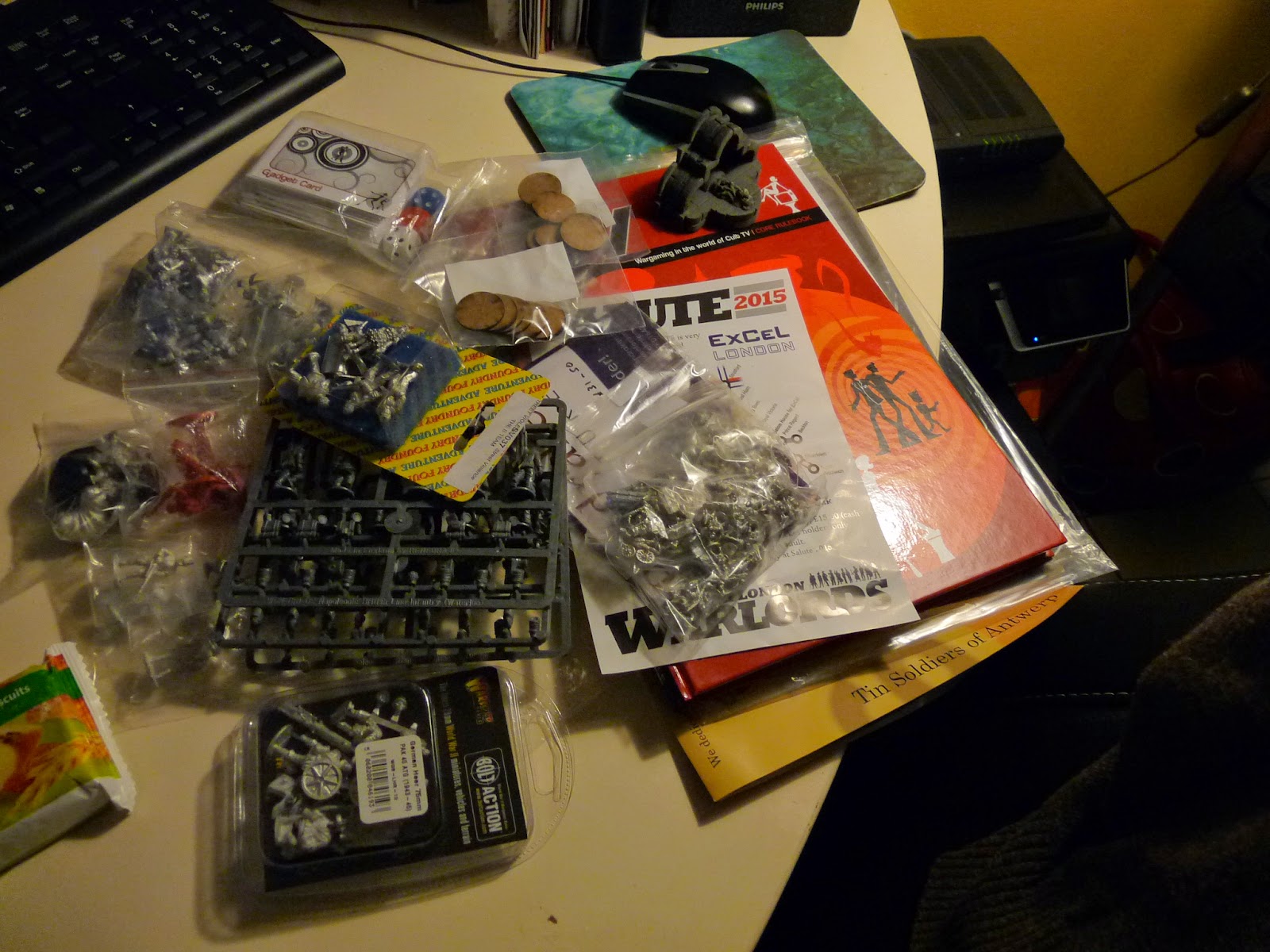 I came away with the barest necessities this year: the 7TV ruleset with cards, dice and counters and the paranormal exterminators by Crooked Dice, Indians by Redoubt for my Roanoke Witchfinder General project, 10mm musketeers and swordsmen by Pendraken to fill out my TYW army, the B-Team by Foundry just for the heck of it and a Warlord German anti-tank gun to better kill Jasper's tanks next time.

Many thanks to the boys and girls of the Tin Soldiers, who made this a fantastic day!!!
Geplaatst door Pijlie op 9:24 PM 10 comments: