Vehicular pursuit rules for A Fistful of Kung Fu 1.2 (EDIT May 8th)

The magnificent little ruleset that is A Fistful of Kung Fu has very few flaws, but vehicle pursuit rules are unfortunately not included. Allthough Andrea Sfiligoi is working on an expansion that also includes these rules, I became impatient and wrote my own. These are currently being playtested and will be edited in the future. In the meantime, feel free to try them yourself! 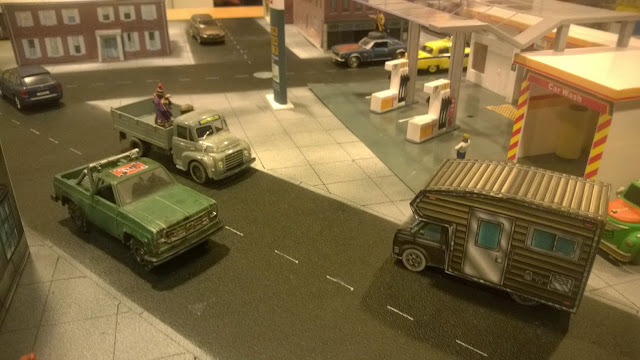 Pictures of a test game

Vehicles activate the same way and at the same moment as the driver. The driver rolls 1-3 Activation Dice. A Driving Activation may either be a Move, a Stunt or Hands-off-the-Wheel (HotW). These may be combined in any order.

Stats
Vehicles have a Combat and a Speed stat and a Turn Stat. Vehicles offer 2 points of cover unless stated otherwise.

Movement
Moves:
·         The vehicle may execute a Turn (any Move deviating from a straight- and along a curved line), an Emergency stop, a Start or a move of a maximum of Speed inches in a straight line for 1 Activation.

A turn is any deviation from a straight line up to a total of 90 degrees. Cars may only turn once per activation. Bikes may turn twice. 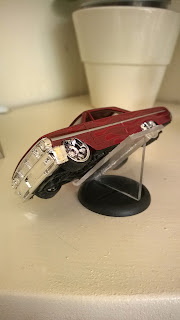 HotW:
while driving (which will still cost him at least 1 Activation) the driver may execute one Action for 1 other Activation like shooting out of the window, grabbing a passer-by or opening/closing a door.

Lose Control
Failing a Quality Test by the driver or rolling three Failures means the driver Loses Control of the vehicle. The vehicle will immediately move 1 x Speed in a random direction in its forward 180 degrees and then stop. The engine will falter in any case and needs to be re-started. 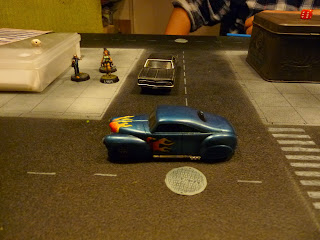 A ramming attack in progress

Shooting at the passengers of a vehicle works as normal. All covered vehicles except bikes offer -2 Cover unless stated otherwise.

Shooting at a vehicle works as normal. Both the shooter and the vehicle roll 1d6, add Combat and modifiers and consult Shooting At Vehicles Table.


Moving across the table:
Playing a pursuit demands a large table with terrain that enables a pursuit (i.e. lots of roads, curves and avoidable stuff). When the pursuit moves off table, simply continue play on the opposite (appropriate) side of the table.

Traffic
The rules assume a certain quantity of other Traffic on the table. All Traffic on the table will usually -for practical purposes- be static unless moving because of the Obstacle table. All Moving traffic will move 1 Medium per turn (drive safely!) in a straight line before any player Moves. Traffic will never actively collide (these are decent drivers, you know) and always stop before colliding when moving. The same might not be true about players....

Figures in cars
So as to present a good visual spectacle, figures should not be placed on top of or next to driving vehicles. Use an off-table template representing the seats in the vehicle.