Finally, with PolderCon 2017 on the (far) horizon I decided to re-animate the John Carter Project. With almnost all figures painted the few things left to build were the famous skyships and some impressive terrain.

I decided to start small with a 28mm version of the diminiutive Aphid class gunboat from the Space 1889 game. Not canon as far as John Carter concerns, but not too hard to start with and well suited to try out some thing I had found and thought up in the meantime.

As a basis I use a half-finished papercraft kit made by Wayne Peters that I found on this link.

While not finished, the thread provided me with templates for decks and hull, gear box and rear engine cowling and more than enough inspiration to finish it myself.

The basis for the hull is a sawed out deck shape based on the templates. 10mm MDF was at hand and very sturdy, but for future ships I think I will get some thinner stuff. 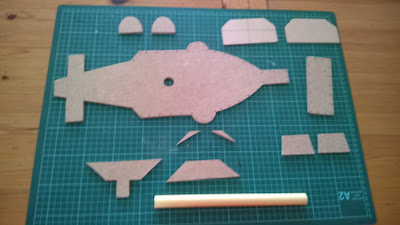 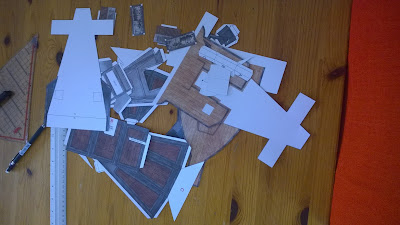 The templates were printed, cut and glued to the deck, reinforced with some MDF "ribs" to enable the ship to stand on the ground without pushing in the paper outer hull. 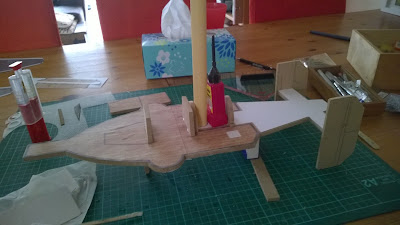 Since the skyship rules I wrote for this project require models to be able to gain and lose altitude, I needed to build a standard as well. I used 20mm MDF and 15mm steel pipe for the standard and 20mm PVC pipe for the funnel. 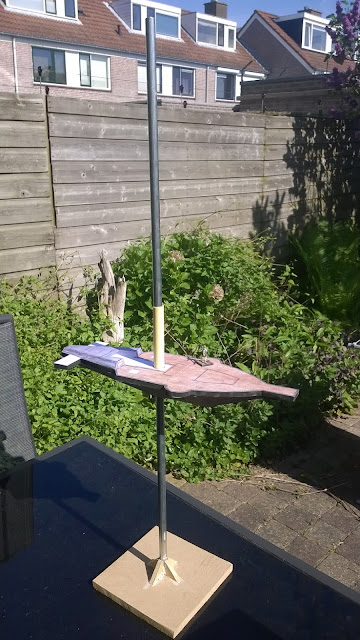 The PVC pipe is attached to the hull and fits over/slides along the steel pipe. Pins hold the ship in place at the desired altitude.  The ship is able to rise some 90cm above the tabletop. More than enough.

The rest of the papercraft kit was missing but plans for Aphid class ships are available in abundance so devising the upper hull works and such was no problem. 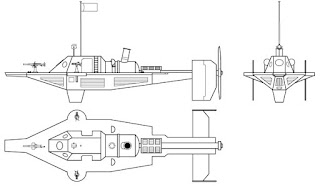 The rest was straightforward scratchbuilding. Boiler and deck house were made of cardstock, reinforced with foamboard -and in case of the second ship (I built two) MDF ribs.

Thick cardboard provided the material for the tail fins and nails-and-string produced an adequate railing. Sinbce the ship rests on the tail fins while standing on the table I will use MDF in future builds. 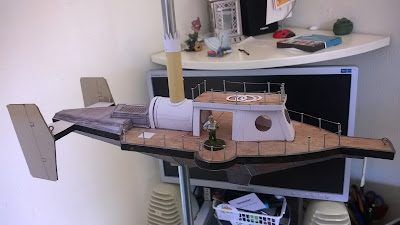 A plastic wineglass sacrificed its base for the greater good and voila! HMS Scarab had a screw! 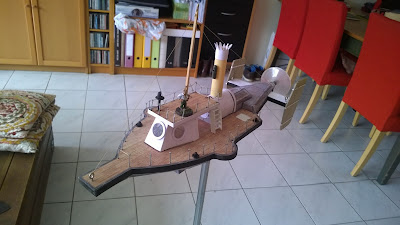 Stairs were made from plasticard and some bits and pieces from the bitbox became bolders, mast and a compass house on the bridge. 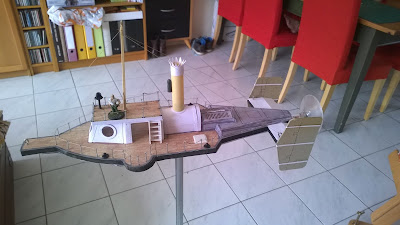 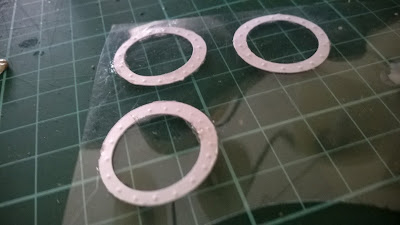 The portholes were punched out cardboard using a 25mm and a 20mm punch with some clear packaging material glued to the back. The "rivets" are punched in from the back with a pointy tool. 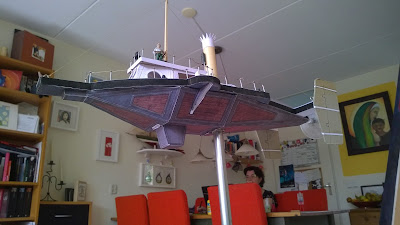 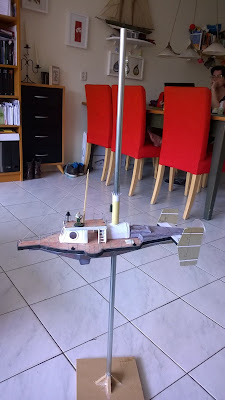 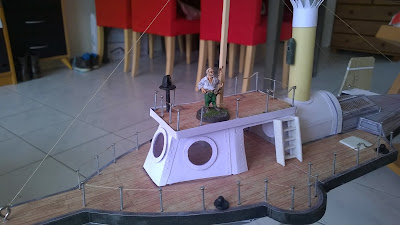 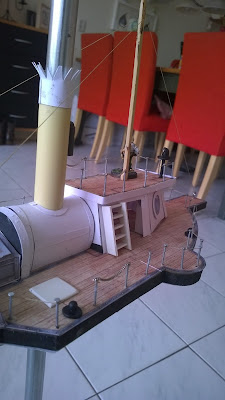 And here she is painted. After painting I added some more details like decals on the fins, a manufacturer's plate on the boiler (a shrunk picture found on the internet and printed) and of course a nameplate on the bridge. The naval ensign is of course a given! 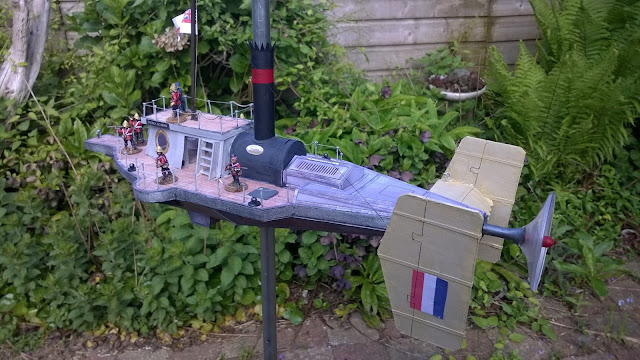 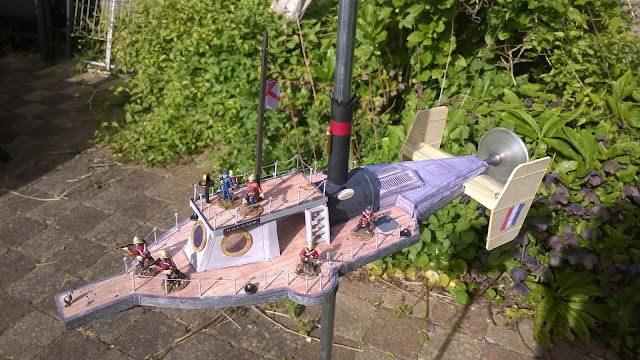 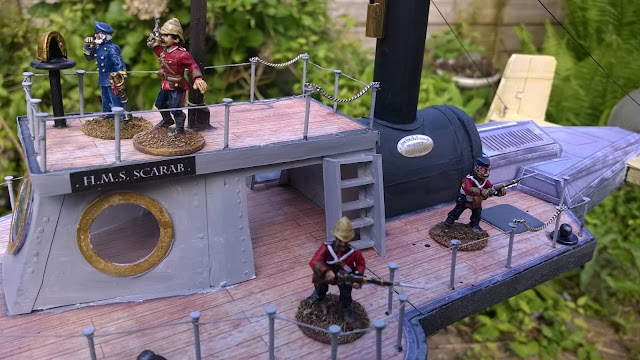 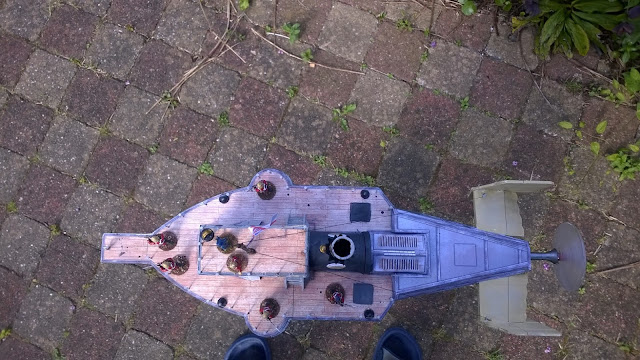 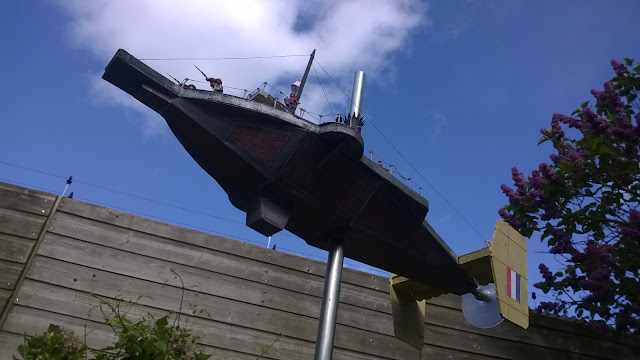