Last week we played Hail Caesar at the club and while it was not a particularly enjoyable game it did present me with the opportunity to field ALL my Carthaginian troops. And then some, since Evert brought his as well. 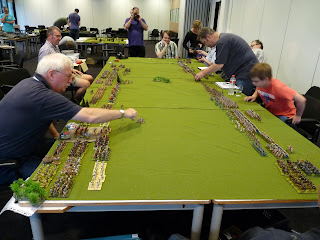 Here are the impressive battle lines. 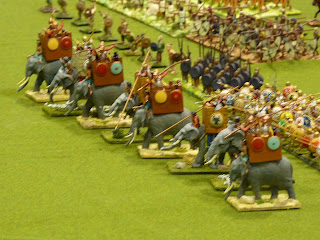 It did also make me realize that Hail Caesar is either not for me or must be played with a significantly lower number of players. It took us over 2 hours of playing time to just get into some serious contact with the enemy.

Noteably a Carthaginian army under the Hail Caesar rules, like in WAB, is also an army not to play against out-of-period opponents. It did not stand a single chance against the outnumbering EIR army consisting of heavy infantry, archers, artillery and heavy and superheavy cavalry we encountered instead of the Republicans I more or less expected.