A few months ago I acquired the Hellboy board game by Mantic. I was lucky enough to get my hands on the Kickstarter version which included several expansions and some Kickstarter-limited edition stuff. As usual I fell for the miniatures but heard good things about the game. Once painting had commenced enough I tried my hand at a few games. Here is my view on the game.

The best word to describe the contents of the boxes is "abundant". There are lots of miniatures and 3D-miniaturized counters (especially in the Kickstarter edition). zillions of cards, large and small (which is actually a benefit as it helps to distinguish between them), loads of cardboard counters and the double-printed map tiles that make up the playing board. All this makes for a very good-looking game that needs an impressive amount of table surface. I will let the pictures speak for themselves. 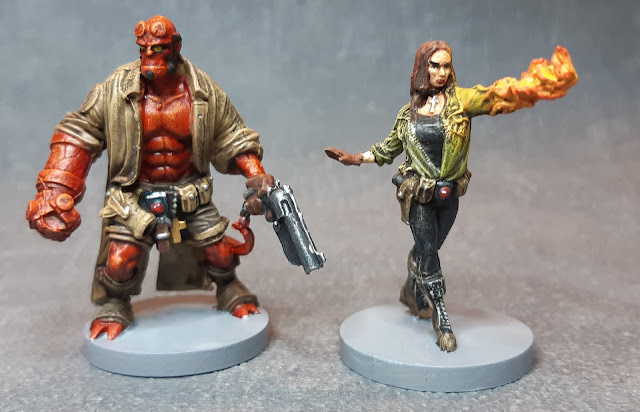 What is more, the game fits in the box, even after punching all the counters and tiles. A real quality in my book.

Players play Agents of the Bureau of Paranormal Defense and Research (BPRD) running missions for that Bureau. In that respect the games are mostly taken from the "Hellboy and the BPRD" line of comics. Readers of those comics will encounter many familiar things.

Players oppose the game and thus play cooperatively to defeat the game, not each other.

This game makes a point of the game narrative and has worked this into the rules used to setup the game in quite a novel way. Whether you like it is a matter of taste, but it definitely does keep you in suspense right up until the final Confrontation if you play it by the book. But let me expand on this below.

Players choose between 2 and 4 Agents to play the game with. Agents' stats are on a dashboard card and Agents come with their own starting equipment as well as some miscellaneous stuff that can be "bought" beforehand. This includes all kinds of weapons, magical aids and Backup Agents, additional figures that can aid you on the board as well as can provide distant backup during the game.

The basis for each game is a scenario, called a Case File, made up of decks of numbered cards.

Reading the first card is also the start of the game. The cards are read, flipped, read again and resolved in succession one by one, each one giving instructions on how to proceed and when to flip the next Case File card.

This way, the players gradually discover the mission, the layout of the game board made up from the cardboard tiles, their opponents and finally (really finally, because it is only revealed when reached) the final Confrontation; the End Boss.

This means that the board is laid out during play and the Encounter cards (that determine what you encounter on the board), the Enemy cards, the Doom cards (usually bad things that happen to you during play) and the End Boss and his Behaviour cards are sorted during play. The game has a large number of coded cards that each fit certain Case Files.

While it is on the one hand interesting to discover the mission and all its challenges during play, players should realize this can take up to 30 minutes before you actually roll any dice.

The game unfolds in phased turns. First, enemies act. These move and attack in combat or at range in a programmed way. Enemy attacks automatically succeed and the Agents defend against it.

Then the Agents act. Each Agent has 3 Activations that can be spent on Actions. These Actions can be general things, like moving on the board, shooting, or Special Actions tied to the Agent, like Liz's Fireballs and Hellboy's Right Hand of Doom Punch. Actions can be spent in any succession and can even serve to aid another Agent. 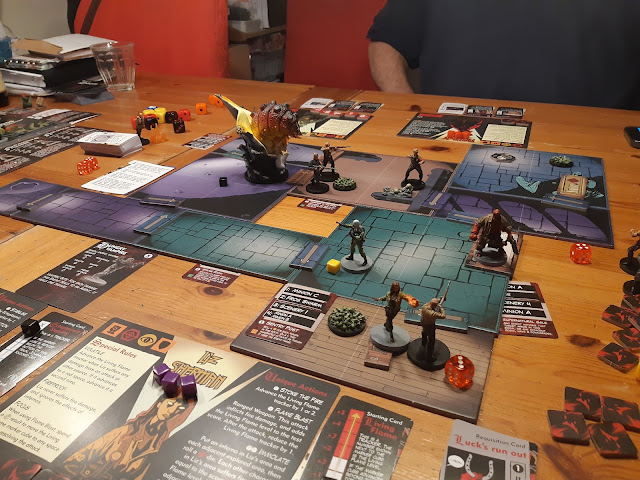 You roll tests with three coloured dice and an Effect die. The colours (yellow, orange, red and black) indicate increasing effectiveness and the Effect die adds one of 5 bonuses (Extra successes, roll again etc) and 1 penalty (Discard the highest die). 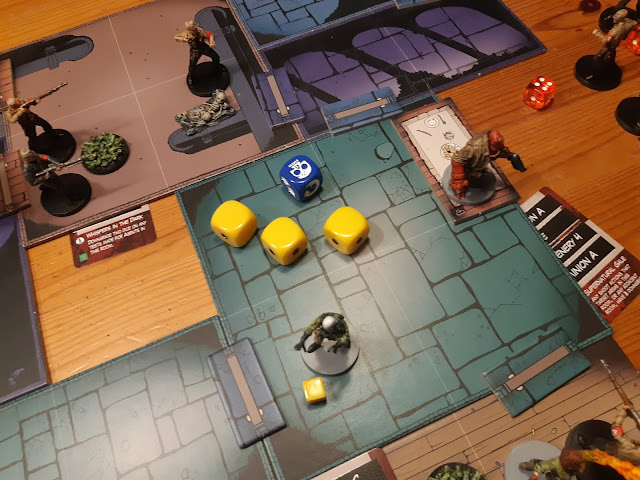 Through these Actions and tests the Agents interact with enemies and board elements. They can Explore new rooms, work out Encounters, attack enemies, put out fires or investigate Clues. Investigated Clues gives your team Insight Markers that will provide bonuses in the final Confrontation.

Agents can then rest (provided there are no enemies on the board) during which they can Heal, Investigate clues, take new positions etc. Resting and the Doom cards that you draw every turn may advance the Doom Track, the time limit on the scenario. As soon as the tracker reaches the point the scenario has indicated, the Final Confrontation begins, whether the Agents are ready or not! And with some wrapping up of the turn, working out some game effects like fires and Frog swarms (literally signs of Doom) the next turn begins.

When the Doom Tracker hits the End point, the Final Confrontation begins. The game then proceeds just like before, but without the chance to rest and without Doom cards. 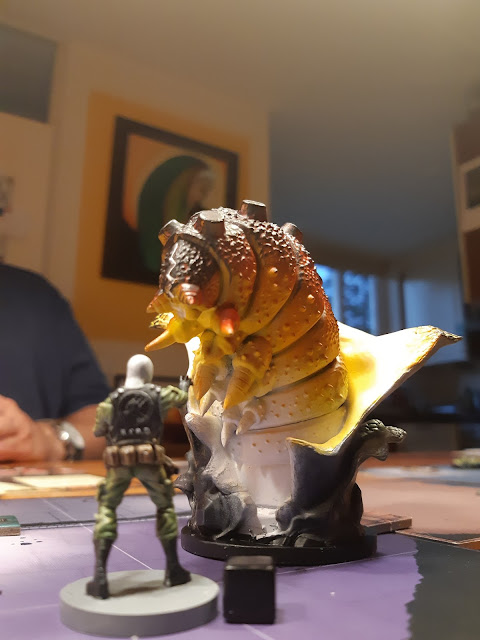 The last Case File cards now tell you what your final challenge will be, which Boss and Behaviour cards you have to sort out, as well as the Victory conditions the Agents have to meet in order to win. This usually includes killing monsters, saving people or blowing up stuff. Or all of those at the same time!

While all of the above sounds pretty complex when you write it out like that, once the dice start rolling game play is actually pretty quick and straightforward. Everyone is constantly involved since Agents can use their Actions in any sequence they like, so alternating actions and helping each other keeps drawing you into the game.

The Encounter-, Doom and Enemy cards provide you with all the information you need during the game, provided you are acquainted with the rules. To be honest, having one player that is rule-savvy should be enough. The rest of the game play let's you make your tactical decisions and take your Action even if you don't know all the rules.

Scenarios are tough. Preparation for the Final Confrontation takes some planning and can be done more ways than one. Endgames might catch you by surprise depending on the cards and Confrontations can be hard-fought and still lost. Even the ones labelled Medium can be close affairs and I haven't tried any "Hard" ones yet, so those must be real nail-biters. 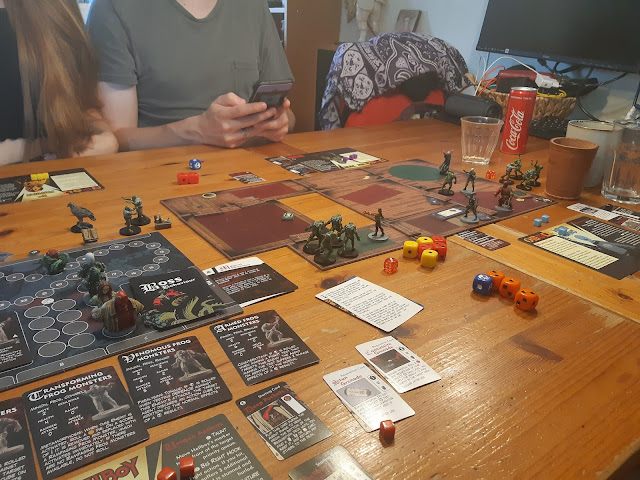 The game looks terrific (especially painted), plays quick and tense once the dice start rolling and is an excellent example of a cooperative miniature board game.

All Case files are based on Hellboy stories, so a fan like me can be content and can find a lot to recognize. It should even support solo play and can harbour up to four players. Regardless of the number of players I should not attempt a game with less than three Agents.

There is one entire Case File dedicated to be an introductory scenario and with a game as complex as this that is certainly a big help.

The most important thing is also a matter of taste and principle. Mantic has put a lot of work into the narrative of the game. Starting with the Case File card nr 1, the game literally unfolds during play while more and more information becomes available and reveals your mission, opponents and challenges.

However, this takes time. In out first game, having to look up things due to unfamiliarity with the rules, it took us 40 minutes before the first die roll. Even now that we have things sorted out better, it does not get much below half an hour.

When you need that much time to get into the story of the game, it is essential that everybody likes that. Or some people will be sitting there, waiting to get started while you get the game set up.

Perhaps it is different when you play with seasoned board gamers only that all love the Hellboy canon and can participate in setting up the game, but in my experience such parties are rare. We found the game setup took way too long to be interesting for everybody. So we took to flipping through the Case Files, sorting everything out in advance and get right into the playing part of the game.

There are no Case Files for 1 or 2 Agents. That would have been nice for smaller games. On the other hand, nothing stops you from attempting any scenario with just 2 Agents.

With the caveat mentioned above, this is a great game. Get into it.