Spectre Operations: a review of the 2nd edition

When playing a modern wargaming ruleset my impression always is that the bar for realism is raised just that much higher. After all, while we must always assume stuff when playing historical games (and the further back in time, the more assumptions we need) we can see and know modern warfare from the news, the Internet and, if we know such people, from conversations with veterans and active military personnel. So even when we have not served in active military duty, it just takes that bit more to “feel right” when playing a modern wargame. 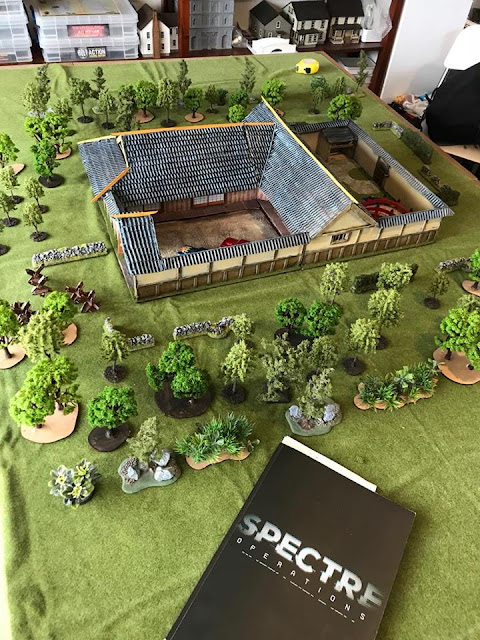 When trying to achieve this, the first pit fall for the game designer is to over-detail things and end up with a hyper-realistic but unplayable ruleset of daunting complexity and glacial playing speed. It takes quite some skill and creativity on the part of the designer to avoid this and still come up with a game that answers to our demands for realism and offers a great game at the same time. Spectre Operations is a skirmish ruleset that strives for this. Having reached its second edition recently, I thought it time for a more thorough review. 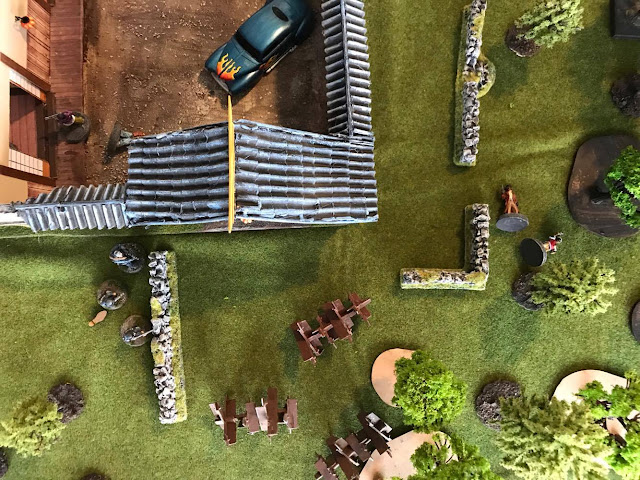 Spectre is a skirmish game on a 1-on-1 figure scale set in the present day (which means from the Cold War days onwards to the near future). So the game supports and features the most modern weapons, equipment, vehicles and tactics. Think mini-drones, heat-sensitive gunsights and realtime battlefield communications. All of this of course existing alongside older technology that should also function in the game.

It is obviously also meant to play current conflicts, some of them even going on at this moment. This, I know, is not for everyone, but this review will not address that aspect of the game. I will assume that everybody who wants to play –or plays- Spectre has no problem with that.

Spectre works best when playing scenarios with mission objectives. As it should, since the usual wargaming standard of “pitched battle to the death” rarely features on the real battlefield. 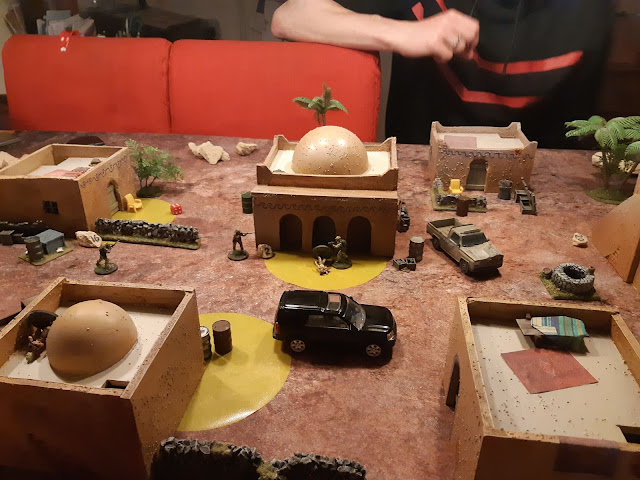 Spectre also assumes that the defining aspect of the modern warrior is his or her training and experience. Troops are divided in quality classes (Levels) ranging from untrained civilians to elite special forces troops. Troop level determines skills, but also generally available weapons and equipment, reactions to events and certain types of behavior. For example, Untrained troops have better morale when operating in units of 10 or more and Elite troops do not have to adhere to Unit Cohesion and may operate individually.

Finally, available actions are severely influenced by Commands given before the "real"action phases. Whether troops are Alert (aware of imminent action) or Unalert (aware of possible action, but not specifically) greatly influences possible commands and actions.

Mechanics
Spectre is turn based, each turn divided into phases that define a moment to make decisions, take actions or suffer the consequences of those actions. Turns are repeated until the victory conditions of the scenario played are met and the scenario ends. Phases include Initiative, Commands, Movement & Tactical actions and Combat (Ranged- and then Close-)

Actions and their success are determined by rolling a D6 against a skill number. Skills include things like shooting, agility and command. Environment and circumstances usually cause modifiers to be added or subtracted. 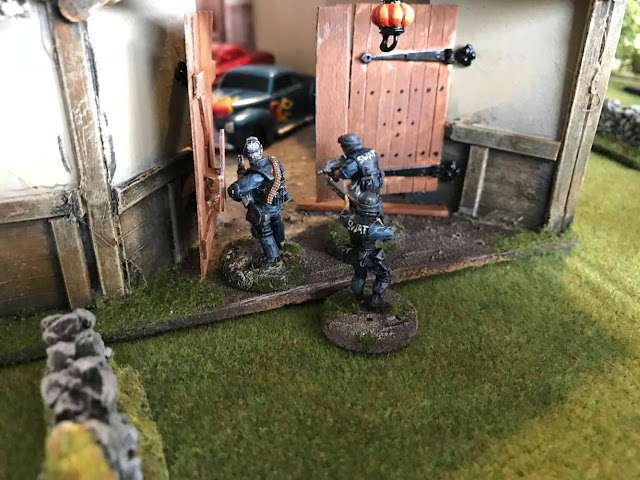 Turn phases
In the first phase Initiative is determined by a die roll plus the highest Command value in each force minus Suppression effects. The highest score starts each phase of that turn.

The role of commanders and/or highly trained troops comes into play through the second phase of the turn; the Command phase. In this phase Commanders may issue orders to troops they can communicate with if they can test successfully for Command. This enables larger numbers of troops to take special actions in the phases to come, like Overwatch fire (during the opponents movement phase), breaking up squads into smaller squads, Rallying or scanning for hidden stuff.

Players may move their troops in Initiative order and may perform Tactical actions before or after movement like running, sneaking, breaching doors or whatever seems fitting given the situation or scenario. And all these things might be interrupted or enhanced by Command driven actions.

Finally troops may combat by shooting, throwing grenades and fighting melee (in that order). The shoot system is an opposed die roll of Shooting skill plus die vs Defence plus die. Models can be killed instantly or become wounded and more or less incapacitated. This is determined by a roll on a table. 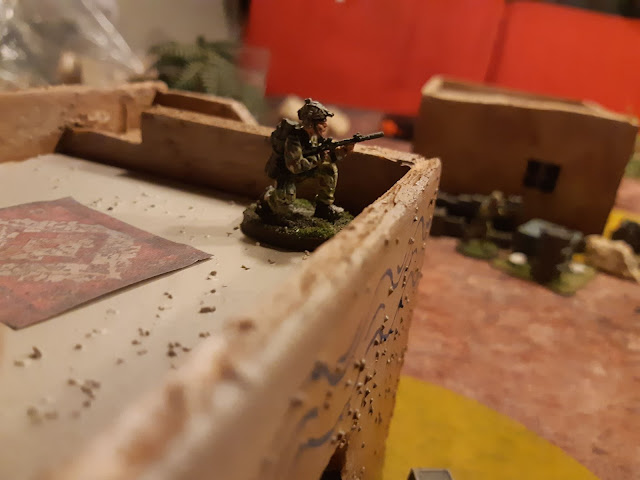 Virtually any kind of weapon used by Man can be handled by the weapon lists. However this is elegantly done by reducing any weapon to a small number of stats: range, lethality and one or two special rules like Rapid Fire (more shots per salvo) and such.

All kinds of actions can be tested by using the stats given to each figure. Command is used by tests of willpower for example, while Agility is used when performing physical tasks. This prevents the need for extensive skill tables and such and results in an elegantly simple mechanism that can tackle virtually anything.

Suppression
Units gain Suppression points when their members are being shot at. As soon as a Force's point total equals its commanders' Command skill the unit must test against that Command skill. Failure will result in a higher Suppression Level. This has an enormous influence on the game. First, the Level of your units' Suppression counts against your Initiative roll for the entire next turn. Second, Suppression levels severely limit the effectiveness of members of the suppressed unit, as they will lose skill points and movement when suppression levels mount.

While Suppression points start at zero each turn, Suppression levels stay and can only be lowered by Rally Commands. They must be managed carefully as otherwise they will slowly paralyze your force and make you lose all Initiative until units are pinned or routed.

Miscellaneous
The rules include the use of all kinds of vehicles and other equipment. Vehicles are equally simple to use, behaving like big models and having a few special rules to handle things like (un)boarding and armour.

The 1st edition provides a point value that has been omitted from the 2nd. This might not be to everyone's taste. I understand that Spectre's website will feature a points list in time. It is no problem in my eyes since I tend to write and play scenarios and the book supports that just fine.

The book offers scenarios and how to make them as well as a chapter on modern tactics to enable the less militaristically schooled player to emulate modern warfare in the way the rules are supposed to support them. Brief and enlightening, it is a very valuable addition to the book.

The 2nd edition offers a chapter on Campaign play as well, which is new compared to the 1st edition.

Both are sturdy paperbacks in full colour. The improvement in the 2nd edition however is MASSIVE.

It sports an extra 40 pages compared to its predecessor and when comparing them the numerous examples and diagrams of play immediately stand out. These were sorely missing in the first book and they are invaluable for making the game more accessible to new players and clarifying the rules. In my opinion the best of the improvements, but not the only one. 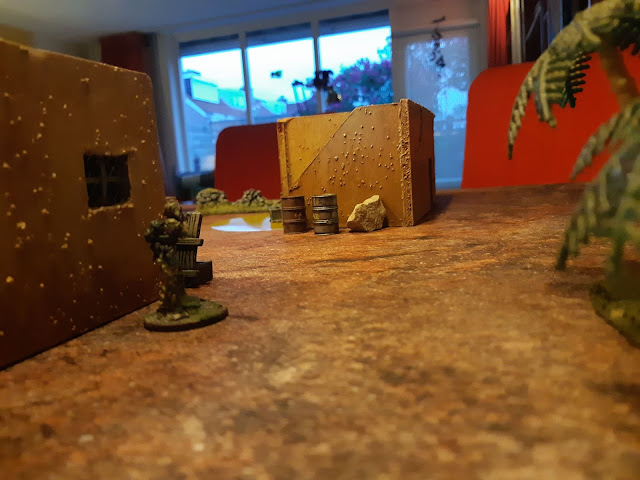 The book's sequence now follows more logically the sequence in which one needs the rules to play a game. And there is an Index! Only one page, but nevertheless it was missing from the 1st edition.

The Suppression rules have been completely overhauled. In the 1st edition Suppression was an individual score that influenced the units. Spectre had no equivalent for a Morale/Break test of sorts but oddly I never missed that. Terrified troops "just" being immobilized instead of magically fleeing the table perfectly fitted the scale of the game. This did however require some bookkeeping and Suppression counters or dice all over the table that are no longer needed now.

Finally several rule texts have been cleared up. For example, the 1st edition was somewhat
ambiguous in whether you could perform a tactial action only before or after movement or during as well. This has been clarified quite well. Spectre obviously has taken the feedback from its fans to heart! 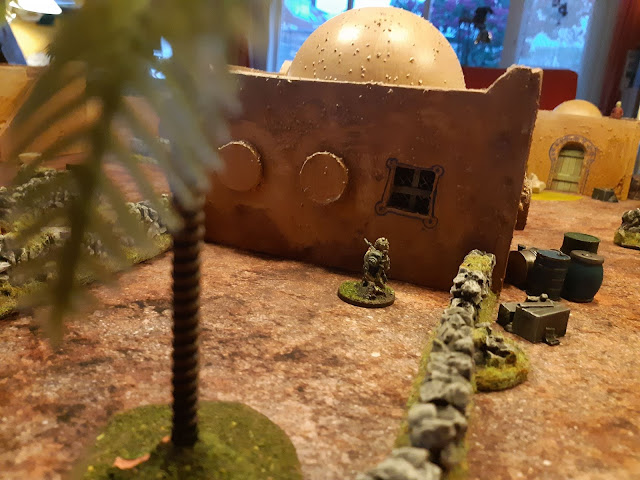 What is good?
Spectre is an accessible game, quick playing and able to handle (but not needing) quite large numbers of miniatures and vehicles. It now has an excellent rulebook to support it. It has a very flexible game mechanism that enables it to do anything one would expect to encounter on the modern battlefield.

This results in an immersive tabletop wargame that plays like one feels a modern engagement should play out on a wargames table. Playing time could be anything from an hour up to a day depending on how big you want your game. It scales perfectly up or down.

It covers all known protagonists of the current age as well as all the weapons one might wish to use in a game.

Last but not least the ruleset is supported by one of the best 28mm modern miniatures ranges on the market at this time: Spectre Miniatures. There are of course other producers for this period, but even if you choose to limit yourself to Spectre Miniatures you will be painting and collecting to your heart's content for quite a while. 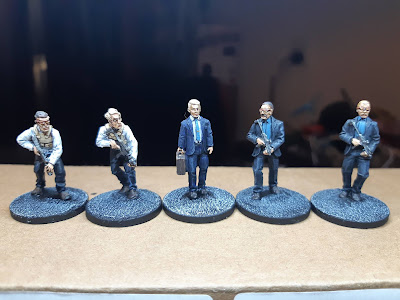 What could be better?
Well, not much. The Index could be more comprehensive. There could have been a point system for those who want that. Mere details really.

If you want to play Modern Day wargames, buy and play this. It is certainly worth your time and money.