Regular readers of this blog will know I am a sucker for any wargame that drags the Cthulhu Mythos into its rules in any decent way. So when Crucible Crush and Bob Murch of Pulp Figures' fame announced a "Weird War Vietnam" ruleset I was immediately interested. Frankly, this announcement was what got me into collecting Vietnam figures in the first place.

My expectations could be summed up as a ruleset that would enable me to play Vietnam skirmish in a not-too-complex way with a generous helping of Cthulhu Mythos per game. I had a thorough read, some correspondence with the writers and a game. 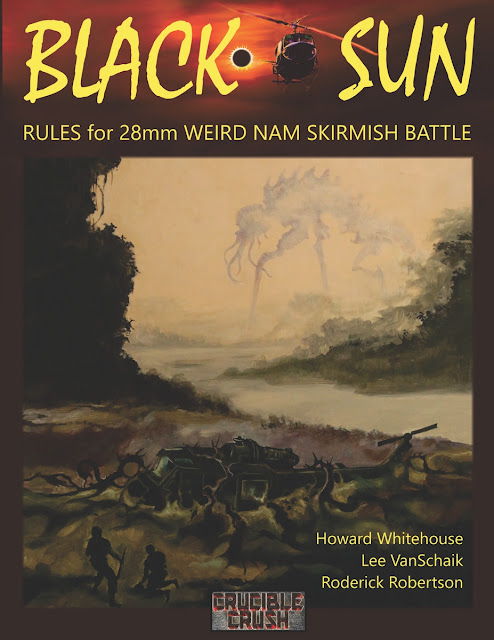 The background boils down to this: somewhere in the jungles of Cambodia an ancient temple houses a way to another dimension: the Black Sun. This parallel Earth-like jungle world was once constructed by an ancient race now long gone and is inhabited by strange and dangerous alien creatures as well as a number of Earthly beings that happened to wander into the Black Sun in the past centuries and survive there.

When because of the Vietnam War in the early 60ies activity in the area exponentially increased Vietnamese and US forces started to get trapped in the Black Sun dimension too. While trying to escape, they still continue their conflict. But they are not alone. 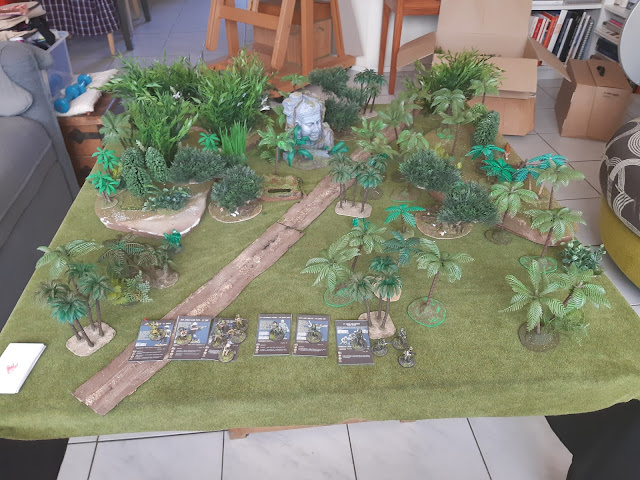 Besides an unknown number of monsters (Shoggoths come to mind) and alien wildlife the Black Sun world is also home to the Adaro (think Deep One Vietcong with AK47s), the alien Fury Bugs being a combination of both monsters and wildlife all rolled into one, the survivors of the 1938 Nazi Lemurian Investigation Group expedition (LIG) and the members of a crazy Cthulhu Mythos cult; the Children of Hastur. 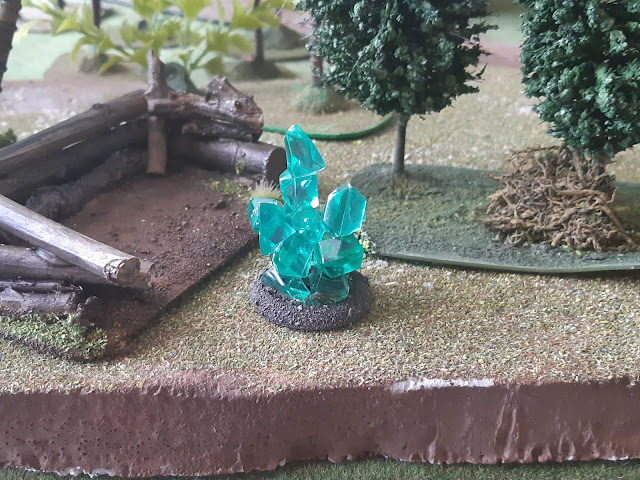 Future expansions will offer more creatures, scenarios, a campaign and perhaps new factions. All this was promising enough for me in any case!

An A4 full colour 64 page softcover including rules, faction lists, 3 scenarios, Quick Reference Chart, some counters, force and "What the..." cards and lots of pictures and drawings. More below. 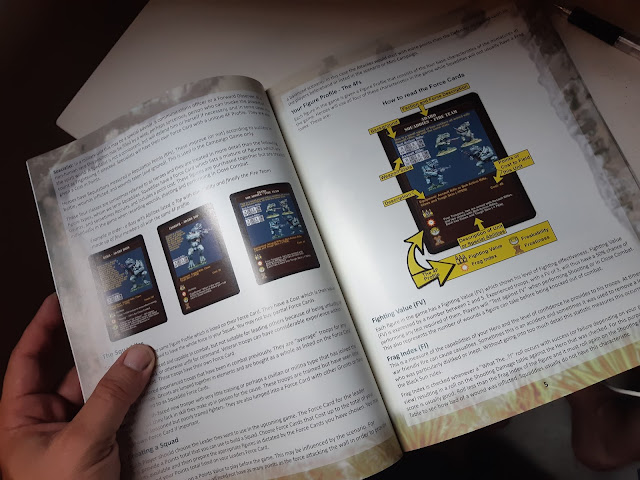 BS is for the most part a tried-and-tested IGO-UGO rules mechanism with a few interesting innovations. I understand it is derived from the Flint And Feather ruleset but since I don't know or own that one I cannot comment on any (dis)similarities there might be.

You build your force by choosing a Force Card containing a leader (Boss) and using his point pool to buy more force cards from the same faction. The force cards are the building blocks for any force and are included in the rulebook to be scanned and printed.

A Force card holds all the data on a character or a group (like a fire team or a MMG team) and are therefore also handy reference cards during play. A BS Character or group only has 4 stats and sometimes some special skills, Fighting Value being the most frequently used stat. FV also functions as Hit Points number. 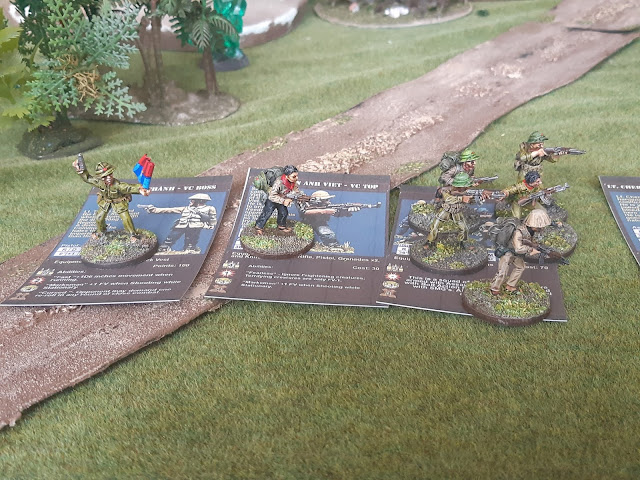 The players roll for Initiative and then in turn (once each) for Activation. The roll will Activate all, some or one of your Groups depending on their state of mind. Groups are flexible and may split and join at will and will function better when led by an NCO or CO.

When you roll a 6 one group Activates and a "What the..."(WTF) card is drawn. WTF cards cause unexpected events, like napalm strikes, monsters et cetera. Also, alongside drawing a WTF card your leader may get shot in the back by a disgruntled grunt depending on his Frag stat. An interesting take on things I never saw before. WTF cards are provided in the rulebook.

An Activated group gives two Actions to any group member. Between Actions your opponent may React (if he can get his troops Activated) and thus interrupt your turn.

Actions can be Move (run, walk, sneak), Shoot, Rally and a number of other things amongst which is Ambush, which gives you an enhanced Reaction in your opponent's turn.

To React to- or Act against someone your opponent must be Spotted and this must be done consistently, thus simulating fog-of-war and the obscuring nature of, well, Nature.

Shooting and Combat are Group affairs (shooting itself as well as determining the target: you fire at a group, not at individuals) and are a roll against FV, modified with circumstances like cover and such.

Hits are turned into random pin/duckback/wound results against random opponents (also not something you often see). Weapons have different ranges, Damage stats and number of shots. All the major weapons from the period are present in the stats.  Hit results may be Pinned, Duck Backs and Wounds of various impact, up to instant (even "Gory") death. Sometimes things call for morale checks (Frostiness) and units can be suppressed by enemy fire. 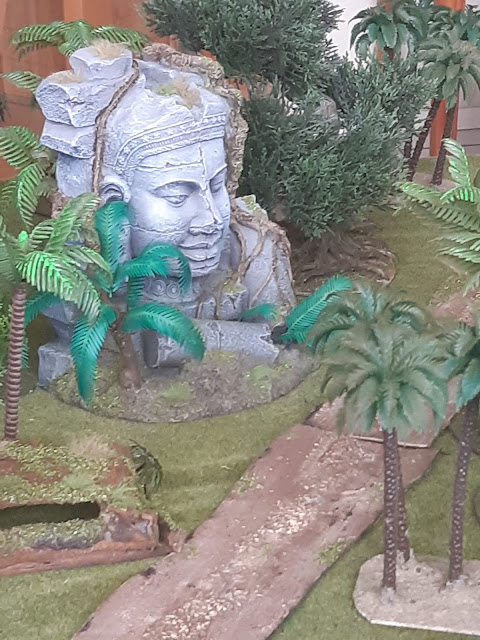 How does it play?

Keeping in mind that the tables you need to determine things like Wound- and Activation results will eventually settle in your memory the game plays pretty smoothly. For our test game we had to consult the tables a lot. Activating, moving, spotting and shooting work fine. We played about 5-6 turns in about an hour and a half, taking our time to look things up when they were unclear. Gunfire is bloody, so sneaking and using cover really are important, as in reality.

The Spotting rules really enhance the feeling you are sneaking through a jungle, know that the enemy is somewhere but cannot always see him.

While Wounds, Pins and Duck Backs limit the effectiveness of individual figures, they do not affect the state of mind of the group they are in. We never encountered a Frostiness test, since those only happen under very specific circumstances (not even your leader dying causes it) and suppression is only caused by specific things like MMGs or grenades so also did not occur in our test game (which did not have those weapons). So Morale and Suppression do not factor in heavily, or at all. I must say, for a modern skirmish game, this felt a bit bland.

In our game we never rolled a 6 for Activation so never drew a WTF card. Therefore we did not encounter any surprise events or Mythos creatures.

The game played smoothly, giving a good impression of small unit jungle warfare in the 60ies. The impact of morale and suppression was very limited, which I missed to be honest, but in the end this is a rule-mechanical choice based on taste since such things will slow down the game. I know for a fact that not all wargamers appreciate their little metal men to cower or run because of a bad Morale roll....

The Force Cards were excellent reference tools and building a force with them is a breeze. The Quick Reference Card included in the book was also quite comprehensive. All in all an enjoyable game. 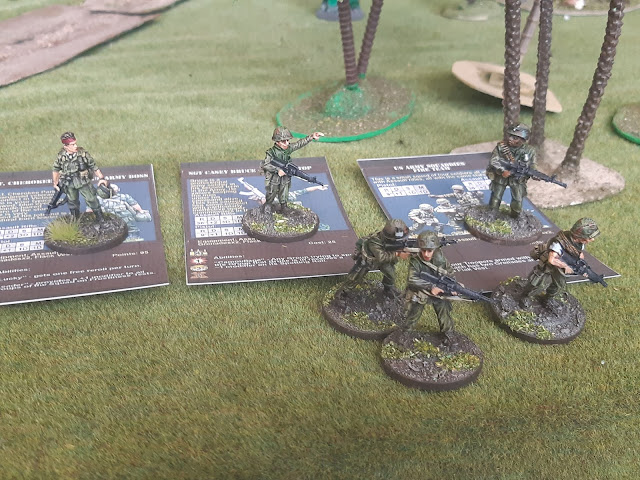 The rulebook, it must be said, contains some choices I do not understand and a number of mistakes in rule-and example texts.

Of the latter, the most disturbing ones are dealt with in the Errata list provided on the website by Crucible Crush, together with a new QRS that corrects a few typos in the Weapon list. Mistakes will occur in any book, but I feel this one could have benefited from better and more thorough editing. Nevertheless, this can be solved by using the Errata.

In some spots the rulebook uses different words to indicate the same thing (Frostiness for Nerve Test or Spotting for Observation) that sometimes make it confusing to find something. When I wanted to know how Spotting works, I looked for a chapter called "Spotting". In this case the chapter was called "Observation", but already in the second alinea it becomes "observation or spotting" and henceforward "spotting".

The rulebook includes stats for Shoggoths, Tyrannosaurs (you can never go wrong with those two) and n indigenous Black Sun creatures like Crystal Trolls and Crystal Centipedes. However, since there are no WTF cards included for those monsters in the book, you will never encounter them in the game unless you make your own cards.

The rulebook also includes stats for some weapons, like mortars, but no Force Card for such units to include them in your force. Since Force Cards are the only way to include them and no points cost are provided, you cannot play those units despite the fact that they are mentioned and detailed in the book.

The rulebook includes detailed Force descriptions for all factions. The one for the LIG includes ghouls, a Golem and Ichillitons. There is a description of the Golem nearly a page long . However, there are no stats or Force cards for them. So of the three combat groups described for the LIG you can actually play only one.

I understand a number of these things will feature in future supplements. For example, all monsters that have been produced by Crucible Crush so far have Force- or WTF  Cards already made. Some of them could not be included in the book due to space constraints and will feature in future supplements. But this is not explained in the book, giving the initial impression (at least to me) that it wasn't complete. Especially the lengthy description of the LIG, it being a faction you cannot actually play in the game for lack of stats and cards, baffles me.

The book contains many pictures showcasing Pulp Figures' figures made for the game. They also feature as illustrations on the Force Cards. While rules are often explained by text examples, these are not always clearly formulated, sometimes incorrect and might have been helped with diagrams or -even better- pictures of  said figures acting out the example. This way, the figures could have been showcased and used to explain the game at the same time.

As long as you don't play Adaro or Fury Bugs as a faction you'll have to depend on the WTF cards for the "Weird" part of the game: the encounter of monsters and Black Sun events. However, they only occur in about one in 6 Activations and most WTF cards are mundane Vietnam War events. And some monsters don't feature in the WTF card pack in the book, so you might never encounter any for many games in a row. There is way too little "weird" for my taste.

The rulebook could have been edited better and gives the impression of being incomplete, missing stats and cards that could (and in my opinion sometimes should) have been included. The entire LIG for example could have been left out and kept for a supplement, freeing up space to include things like mortars and WTF cards for more Mythos monsters.

Turning the layout from single to double column would also have freed up at least a few pages of space that could have been used for content, like stats, cards or scenarios.

For a Weird Nam Game, there is plenty of good Nam gaming going around, but not nearly enough Weird. WTF cards for the monsters in the book should have been included. It might be a good idea to print out the WTF cards with monsters on them twice and put two of each in the WTF deck. Of course you might then encounter (and need miniatures of) two Shoggoths, but really, who can object to that?

For a modern skirmish game the effects of gunfire on group morale and movement are very limited. I personally think these effects should be more severe as that would be better suited to the period, but I understand the choice for less impact from shooting and casualties came from playtesting.

There definitely is an enjoyable game here, but it takes some work to get your hands on it.