Why we all should know about War and Conquest: a review.

A few weeks ago I played my first game of War and Conquest. A ruleset that was published during the last death throes of Warhammes Ancient Battles (WAB). I used to play a lot of WAB. I always thought WAB a magnificent, if in some places clunky game that gave me hundreds of hours of fun. I even played a WAB tournament once which says something because I hate tournaments. But I enjoyed this one.

WAB however was destined for a long and slow death bed. An overhaul for the main rules was postponed and delayed for years. Supplements were always promised and sometimes published, but always late. GW really put some effort into the slow strangulation of what must have been one of the most succesful Ancients wargaming rules ever and finally delivered the neck shot in 2010 with the monstrous WAB 2.0: expensive, fault-ridden, badly edited and even clunkier than WAB 1.5. Everybody who had until then be willing to have sympathy and hope for WAB effectively lost this after paying 45 Euros for this pile of glossy toilet paper. And after the closure of Warhammer Historical in 2012 WAB was finally and truly dead.

Several successors presented themselves. War and Conquest, Clash of Empires and Hail Caesar appeared in a relatively short amount of time around WAB's demise. In terms of marketing success HC was the absolute winner. My club adopted it in the wake of the Black Powder successes, I bought it and played it a number of times. But au contraire to BP this game felt a bit bland, the troop types too generic and the game pace too slow to really peak my interest. COE en WAC were anonymous wallflowers. My Ancient armies started to gather dust in favour of other periods and rulesets. 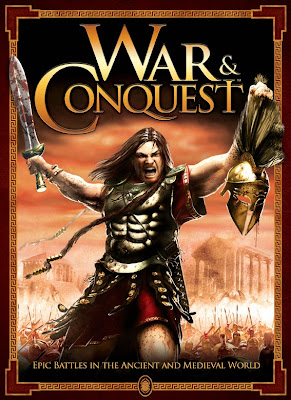 And then some friends of mine convinced me of the virtues of WAC. I bought a copy at Crisis 2013 in November and read it. It did look at least as good as WAB 2.0, but still I was weary. Then, two weeks ago, I played my first game of WAC with my dusted-off Saxo invaders and Romano British "Arthurians". I was very, very pleasantly surprised!

WAC is, in short, WAB as WAB 2.0 should have been. It bears many, many similarities with this game. That should be no surprise given the fact that the editor of WAB, Rob Broom, is the writer of WAC. Describing WAC is therefore best accomplished with a comparison with WAB.

Like WAB, WAC builds up an army in units made up from individual figures that fight and die individually. This does not make it a skirmish game, since the unit/warband is the smallest building block of the game (generals aside). Like WAB, units in WAC fight as the sum of individual stats and although the d6 rolls are calculated differently the needed rolls itself are the familair basic 4+ and 3+. Individual figures are removed from play when they "die" and function as casualty counters in this way, just like in WAB.

But a lot of WAB´s problems have been solved in WAC. The combat-winning super Characters have disappeared. WAC Personalities give you the standard upped Morale check when nearby, a limited strategic option to increase Initiative and Morale checks and an extra hit in combat here and there and that´s it.

The snail-pace cavalry (haha, my skirmishers are within 8"! You can't gallop anymore!) have disappeared and changed into the brittle and fast units that cavalry was in Ancient times. Guard your flank or you will rue your recklessness. And guarding your flanks has become a lot harder. While a flank attack in WAB was next to impossible due to the enormous frontal zones of the units (180 degrees) these have been halved in WAC. Break up your battle line and you are doomed. No more loose units running around on the battle field; now your line is needed to secure your flank, like it was supposed to be and without any need for additional rules.

The annoying skirmishers that could block attacking enemy or friendly infantry have disappeared. Skirmishers can no longer engage formed infantry in combat and due to the changed sequence of charge declaration and movement no longer block charges but can move aside like they are supposed to, to harass the enemy from the flanks. Likewise, several superskills from WAB have been mellowed to playable advantages without "breaking" the rules. Early Imperial Romans are still a strong army, but no longer the hyper-disciplined robots from WAB.

War and Conquest is in many ways a better, more streamlined and more natural playing game than WAB and accomplishes this with less complexity. Mr Broom has made some very elegant choices here.

One of the more lethal faults of WAB was its lack of support. Supplements were long underway and always long overdue. In its 14 years WAB spawned 14 supplements of varying quality, most not very intercompatible, some mediocre, some brilliant. So how is WAC in that department?

WAC was published in 2011, two years ago. So far it has been followed up by eight (yes, 8!) army books containing hundreds of army lists beside a few dozen separate ones. Aha! I hear you say. It is the old let-us-pay-through-the-nose-for-army-lists ploy! Well, no. Those are all free. You can download them from Scarab Miniatures. And they are not simple word documents either. The army books are well written, well researched and well layed out and number 100+ pages each. A few other army books are in the works.

So here we basically have a much improved version of WAB, supported by hundreds of free army lists compiled into 8 free full colour (if digital) supplements. You can use your WAB armies for this game without any adaptation to speak off. You can even use the WAB supplements next to the WAC ones, if you own them and feel so inclined.

Why then, I ask thee, is not everybody playing this game? Why do people pay 30 Euros for Warlords Ancients Army Lists supplement when they can download the WAC Ancients Armybook for free and play a better game wih it? Why did I?

Because, dear reader, I had never heard of WAC. Something this review attempts to rectify.

Please mr Broom. Hire some marketing advice. You have a golden product here with immense customer value. Find a better way to let the world know about this than this lonely blogger.


PS:
As I recently (July 2014) discovered two more period books have been published inb PDF format. The ACW and the Thirty Years War are now represented!